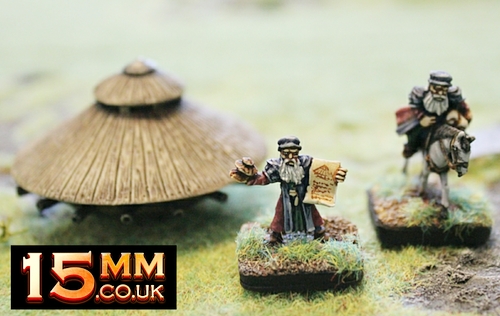 15mm.co.uk is proud to present two new packs added to the HOT 15mm Fantasy range. While not strictly fantasy these packs straddle the divide between the real world of the Renaissance and the invented world of fantasy. They can be used for both and 'Da Vinci World' is an accepted army list for several wargame systems. We have a true scale 15mm version of Da Vinci's tank, his turtle car, a wooden behemoth and would spread cannon carnage on a battlefield. We also have the great man himself Leonardo Da Vinci on foot and on horseback so you can add him as a character to your games. Fans of Renaissance Warfare, fans of 15mm Fantasy warfare read on! Thanks. GBS

15mm 15mm.co.uk New Release
This entry was posted on Friday, October 9th, 2015 at 17:21 and is filed under News. You can follow any responses to this entry through the RSS 2.0 feed. You can skip to the end and leave a response. Pinging is currently not allowed.