I am thrilled to report that tonight, the total for the Battlegames Combat Stress Appeal which has been running for about eleven years, topped £30,000 after a 48-hour surge. This sum has been raised over an extended period and the charity tells me that this is what makes our Appeal so unusual – people (I’m tempted to say “sensible people”) normally use a single event of some kind, such as a marathon run or raffle, to drum up funds for charity, making our efforts unique.

Prompted by an invitation from Combat Stress to a reception at the Cavalry and Guards Club in London on Thursday evening, I noticed that the fund was just a few hundred pounds short of £30K and thought it would be wonderful to be able to give them the news that we had reached the round number.

This tally has only been achieved thanks to the generosity of hundreds of wargamers since I first launched the appeal in Battlegames magazine in 2008. I am particularly grateful to all those who have donated so generously in this last minute dash across the line – I must have come across as Mr Pushy on Twitter in particular!

But there have been so many people involved, whether individuals making donations, clubs making collections or allocating part of the entrance fees from shows to the cause, auctions of wargaming and history ‘stuff’ to add to the pot as well as a few notable events (some may remember be slogging from Battle to Lewes in Sussex with Simone Drinkwater of Casemate Publishing on the hottest day of 2011) that it would be unfair to single out any one thing. It has really been a remarkable team effort and demonstration of ‘the spirit of wargaming’ and I am proud to be associated with you all.

£30,000 is, of course, a significant amount of money and I’m sure you’d understand (and perhaps even be a bit relieved!) if I decided to draw the line there. But the fact is that Combat Stress still only receives something like 20% of its funding from the UK government, and everything else has to be raised by volunteers and their fundraising team, so as far as I’m concerned, the struggle continues.

Thanks to everyone who has supported the Appeal and I shall be proud to represent you all at the Combat Stress event in London. 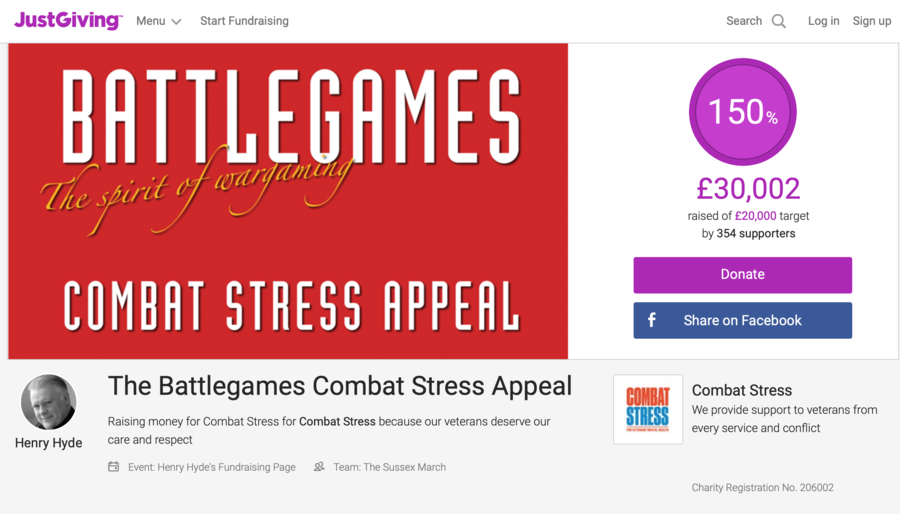 battlegames News
This entry was posted on Thursday, September 19th, 2019 at 08:50 and is filed under News. You can follow any responses to this entry through the RSS 2.0 feed. You can skip to the end and leave a response. Pinging is currently not allowed.