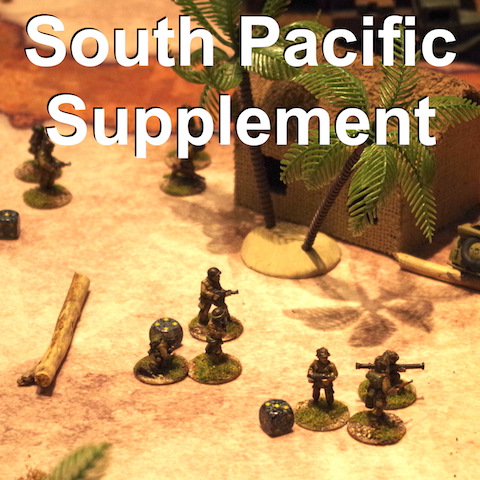 This week sees the release of the new Combat Patrol supplement for gaming platoon level engagements set in the Second World War Pacific Theatre of Operations.

Fighting in the South Pacific during World War II was unique compared to other theatres, even other parts of the Pacific.  This supplement includes rules that represent the unique nature of Japanese morale, Banzai! charges, suicide anti-tank attacks, night infiltration, vehicle-mounted flame throwers, and other rules. The Banzai! charge rules strike a good balance between effectiveness without overpowering the charge and making the Japanese invincible.

Of these new rules, the most significant are those for Japanese morale.  The basic morale rules work very well for other theatres, including China, Burma, and India.  In Combat Patrol™ morale failure is represented more as a loss of cohesion than a sudden, unexpected retreat.  As units take morale checks, the unit gradually dissolves or stops responding to commands.  Japanese morale failure in the South Pacific seems to have been more unit oriented than individual; the unit leader will decide to retreat, take cover, or assault the enemy in response to fire rather than individuals melting into the jungle.  The new morale results reflect this. 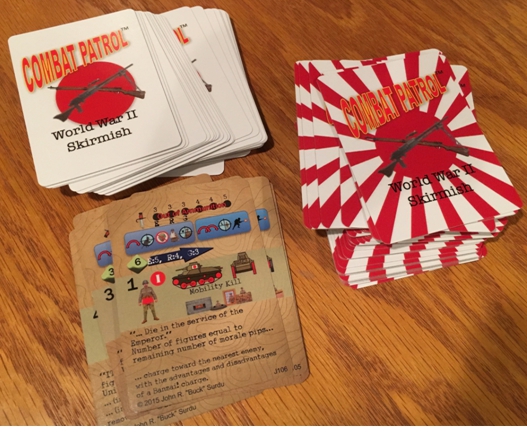 In Combat Patrol™: World War II, cards in an Action Deck are used by players to resolve shooting, determine movement distance, conduct hand-to-hand combat, and check morale.  This eliminates the need for charts and tables.  Each player has an Action Deck that he uses to resolve these actions.  New decks are now available for gamers using a Japanese army. The parts of the cards that deal with small arms fire, melee, HE, movement and cover saves are the same as all of the other Combat Patrol decks, but the Morale section is unique to reflect the rules for Japanese morale. The new cards are optional as existing cards can be used to cross reference the Japanese morale rules in the supplement, but having the specific cards makes morale tests a lot easier.

Combat Patrol Card Dispenser £10 RRP – Easy to assemble MDF kit to make a handy and attractive card dispenser in the shape of a bridge to keep your action deck and discards tidy on the gaming table and easy to move around with you to where the action is.

Combat Patrol Card, Token and Dice Storage £15 RRP – Easy to assemble MDF kit styled on the vintage card index, and including drawer with dividers to hold dice and counters and a set of index card dividers.  The set includes five dividers, four marked as Action and one as Activation.

As usual the supplement is available as a free to download PDF file, the new cards and the Combat Patrol card dispenser and  card and token box are available to purchase from Sally 4th website HERE and we will have them with us at shows including ‘The Other Partizan’ on Sunday 20th August.

News sally4th WWII
This entry was posted on Tuesday, August 15th, 2017 at 16:50 and is filed under News. You can follow any responses to this entry through the RSS 2.0 feed. You can skip to the end and leave a response. Pinging is currently not allowed.