Counting Down To TTGL

So I’m back from my holiday and have cleared the order backlog, everything to the end of Sunday has shipped so things are officially Back To Normal on the mail-order turnaround front. I’ve turned my attention back to Tabletop Gaming Live, which is just five days away now. Although it’s very close, you still just about have time to get in pre-orders if there’s anything you’d like us to reserve for you – I’m casting tomorrow, so really need them by the end of today (Tuesday 25th).

As mentioned, because of holidays ‘n’ stuff we’ve not released anything new for a couple of weeks, instead holding some bits and pieces over to the show itself. We’ve already previewed the Japanese Aeronef – I’m just polishing off the painting on these and will take some better photos later.

We will have some new releases in the Small Scale Scenery range. The first of these is the largest model we’ve yet produced in the range – even bigger than the previous holder of this title, the Roman Amphitheatre. This is a model of a Roman Hippodrome, or racetrack, with the dimensions based on the remains of the one at Jerash in Jordan but with some details influenced by others around the world. It’s over 250mm (10″) long and 75mm wide, plenty big enough for a 2mm scale chariot. There’s no truth in the rumour that we’re about to launch a 2mm scale Ben Hur game, complete with tweezers to move the pieces ! 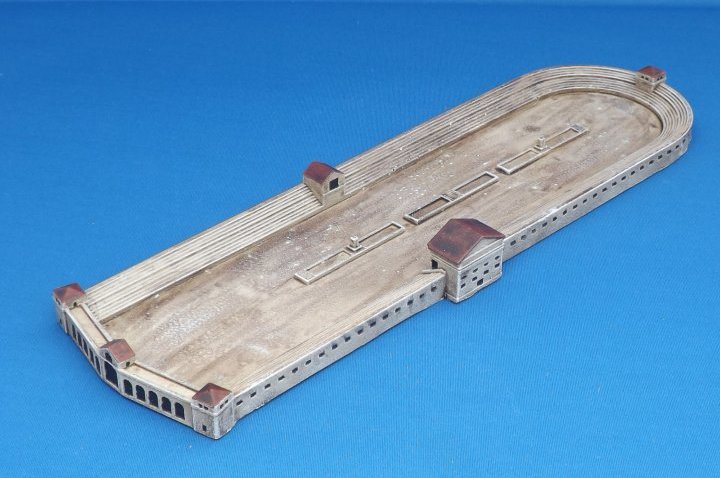 Brigade Models News shows
This entry was posted on Wednesday, September 26th, 2018 at 10:11 and is filed under News. You can follow any responses to this entry through the RSS 2.0 feed. You can skip to the end and leave a response. Pinging is currently not allowed.