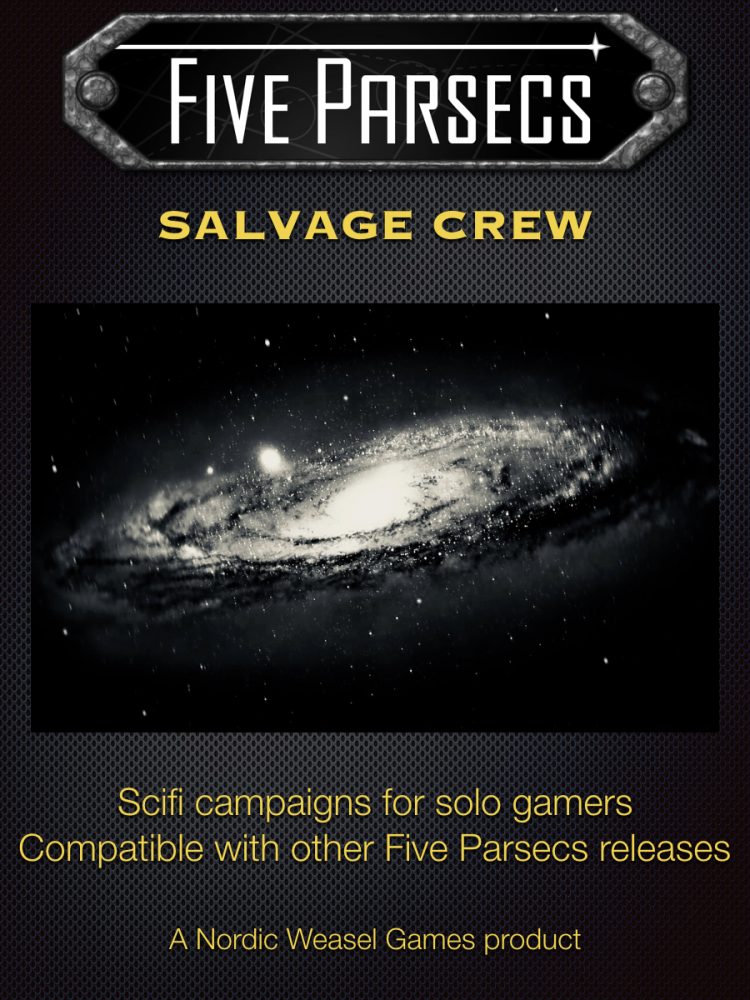 You can check out the new logo too.
When I get a chance, that will get added to the existing Five Parsecs games too

So what is Salvage Crew? (SC here after).

It's a new campaign you play, using the same mechanics and systems as the two previous Five Parsecs (FP) games.

Build up a random crew with their own backgrounds and ideas and then take on the universe.

Salvagers tend to be a bit less militant so you will find your crew may end looking a little different.

Campaigns work in a similar fashion: Assign your crew to jobs and play out table top missions.
Money is a much bigger issue now: Salvagers earn more of it, but they also begin the campaign owing a lot of money for their ship and license.
Bottom out and you can have your campaign ended by your ship being seized (seems like a great chance to delve into a Gang Warfare campaign then huh?)

Turn to turn game play is what you expect, but we now have rules for things like "contacts" (which can turn out to be enemies or not, a bit like PEF's in 2HW titles) and exploring "points of interest".

This is where the big change is:
Your salvage crew is mainly here to loot. There are things to be found on the battle field and you may or may not run into enemies. You'll have to evaluate the risk of getting a particular piece of loot or not, if it might trigger an enemy squad of bandits.

The result is an experience that feels pretty unique, even if the starting point is the same.

The rules are fully compatible with Five Parsecs From Home and Gang Warfare (the GW update will be live in a day or two, sorry for the delay) and you can transfer characters around.

Does it stop here? Probably not.
Five Parsecs could theoretically go any number of places.

New Release Nordic Weasel Games Sci-Fi
This entry was posted on Saturday, January 13th, 2018 at 09:19 and is filed under News. You can follow any responses to this entry through the RSS 2.0 feed. You can leave a response, or trackback from your own site.