Greetings, and welcome to my return to the Pacific!  Both the US Navy and Imperial Japanese Navy are on the prowl in the southwestern Pacific; the Japanese have their eyes on Australia, or at least cutting off the lines of communication between the US and Australia, and the Americans are looking to not allow that to happen.  On 3-4 May 1942, while fighting raged on New Guinea, the Japanese attempted secure their flank, sending an invasion fleet into the Solomon Islands to put troops ashore on Tulagi (across the channel from Guadalcanal), in order to conduct an amphibious assault on Port Moresby on 10 May.

But the Americans noted the Japanese invasion force in the Solomons, and the USS Yorktown launched strike aircraft that sunk or damaged several Japanese warships, though now the Japanese were aware the US carriers were in the vicinity, made doubly worse by the fact the Americans were shorthanded: they had only the Yorktown and the Lexington in the area because the Hornet and Enterprise had just returned to Pearl Harbor following the Doolittle Raid.  These were faced by the Japanese fleet carriers Shokaku and Zuikaku, and the light carrier Shoho.  The two opposing forces marshalled their troops, refueled, consolidated, and began searching in earnest for each other.

Yesterday morning, Lt(jg) Casey led the fighter escort for the Lexington strike force which, combined with the Yorktown’s strike force, managed to sink the Japanese light carrier Shoho.  But the Killer Pelicans’ escorts had a rough go: they downed three Zeros and damaged another, but they lost one Wildcat, had the other three damaged, and five of their six assigned dive bombers were shot down, the sixth returning to the Lexington, damaged.  Lt Casey scored two more kills to become a Veteran (total of four kills), but he was shot down and badly wounded, which will cause him to miss the Battle of Midway.

Yesterday evening, Lt(jg) Fitzsimmons led aloft the Lexington’s Wildcats to intercept a Japanese strike group that was searching for, but not locating, the US carriers.  Lt Fitzsimmons got separated and never found the enemy force, leaving a bevy of rookie Ensigns to do battle alone, and it did not work out well.  Four of the six Wildcats were shot down, and the other two damaged, with the Americans managing to shoot down only three of the ten enemy aircraft.

Both sides carried out preparation for battle throughout the night, then launched scouts shortly after 0600 the next morning, to find the other side’s carriers.  The Americans got lucky first, sighting the Japanese carriers at 0820, though the Japanese were only two minutes behind.  Both sides hurried to turn into the wind and launch their strike groups!  The Japanese launched 18 fighters, 33 dive bombers, and 18 torpedo bombers, while the Yorktown and Lexington launched a combined 15 Wildcats, 39 Dauntlesses, and 21 Devastators, though the Lexington’s contingent was about 10 minutes behind the Yorktown’s.

At 1055 the Lexington’s air search radar acquired the inbound Japanese strike group at a range of 68 nautical miles and vectored nine Wildcats to intercept; it was 1113 local time when Lt(jg) Fitzsimmons again led the Lexington CAP into battle.  And this time he found the enemy! 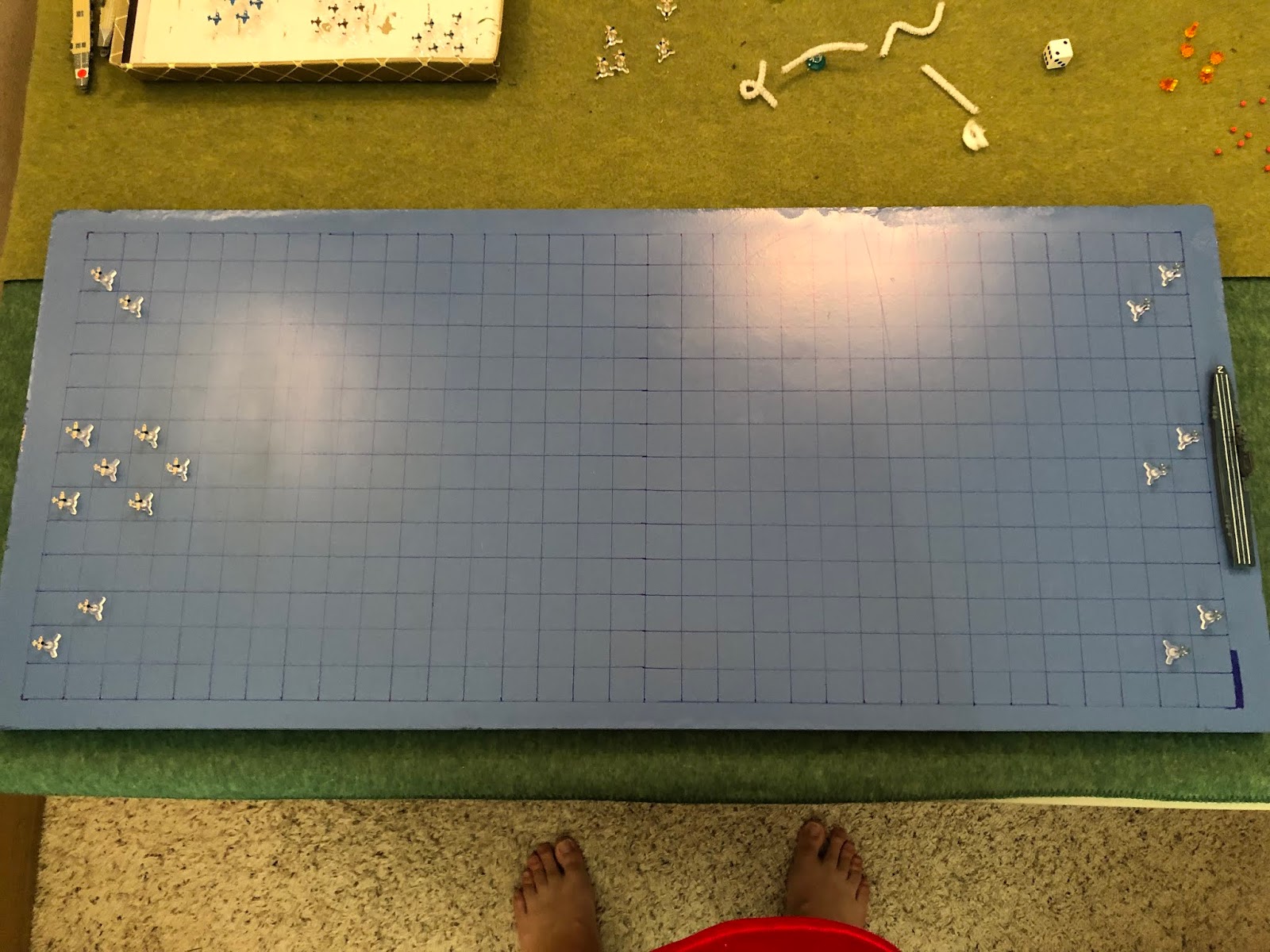 This is my arena for aerial combat; simple, yet durable and, to me, beautiful (in a simple, durable way).  I’m using tiny aircraft designed by my buddy Thomaston; not sure what size they are, just that they are much smaller than 1/600.  They’re 3D printed models that I mounted on cut-down bases from Litko, and I’m using a very simple rules system called “Battle of Britain,” which I found for free over on The Miniatures Page (I’ve already played a good 20 or so fights with them).  Left is north, with the Japanese strike group there, and right is south, with the American CAP and the USS Lexington there. 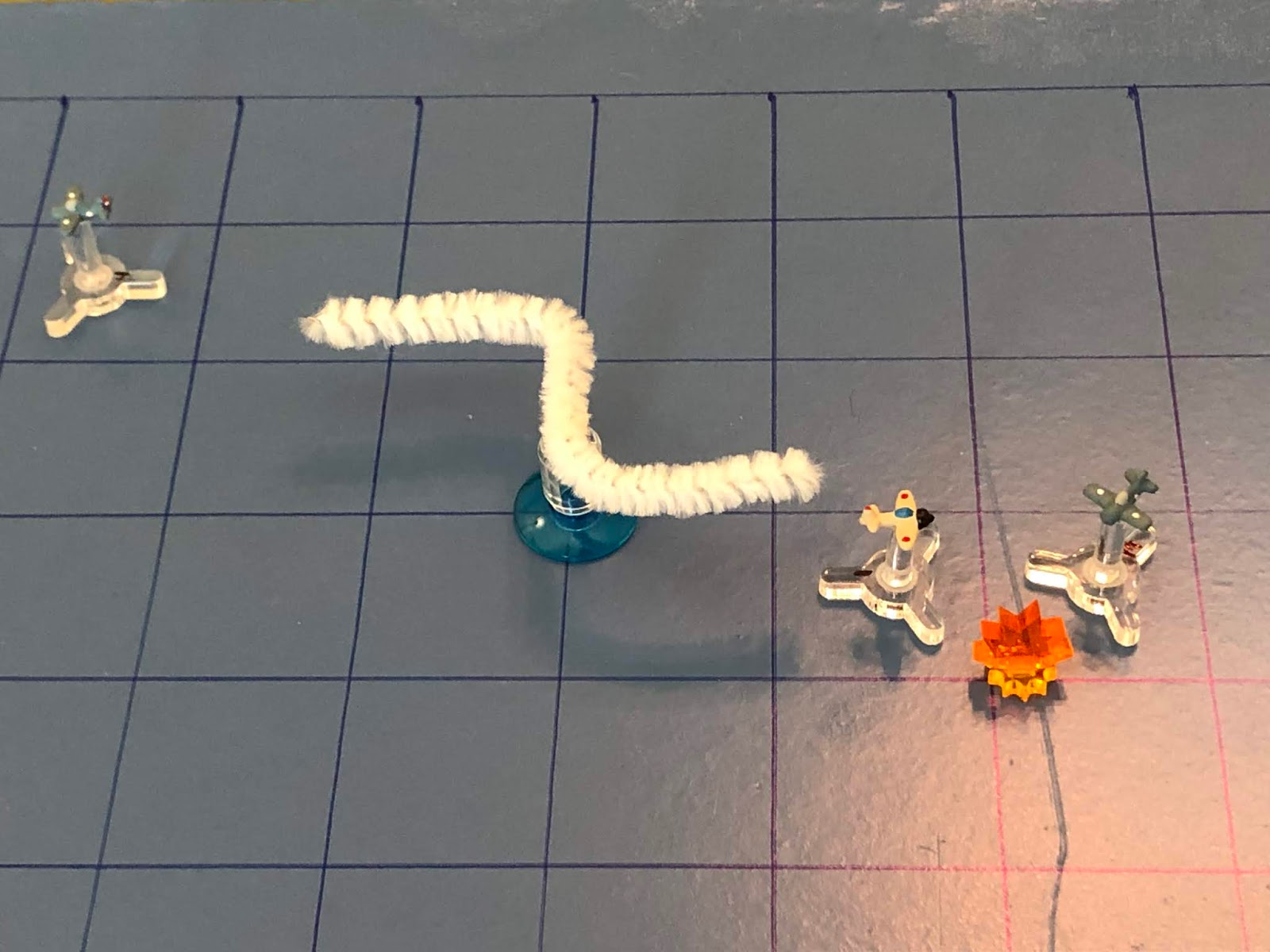 The Japanese super ace jinks his way in, then lays into Lt Allen’s Wildcat, pumping 20mm rounds into the stubby little Grumman. 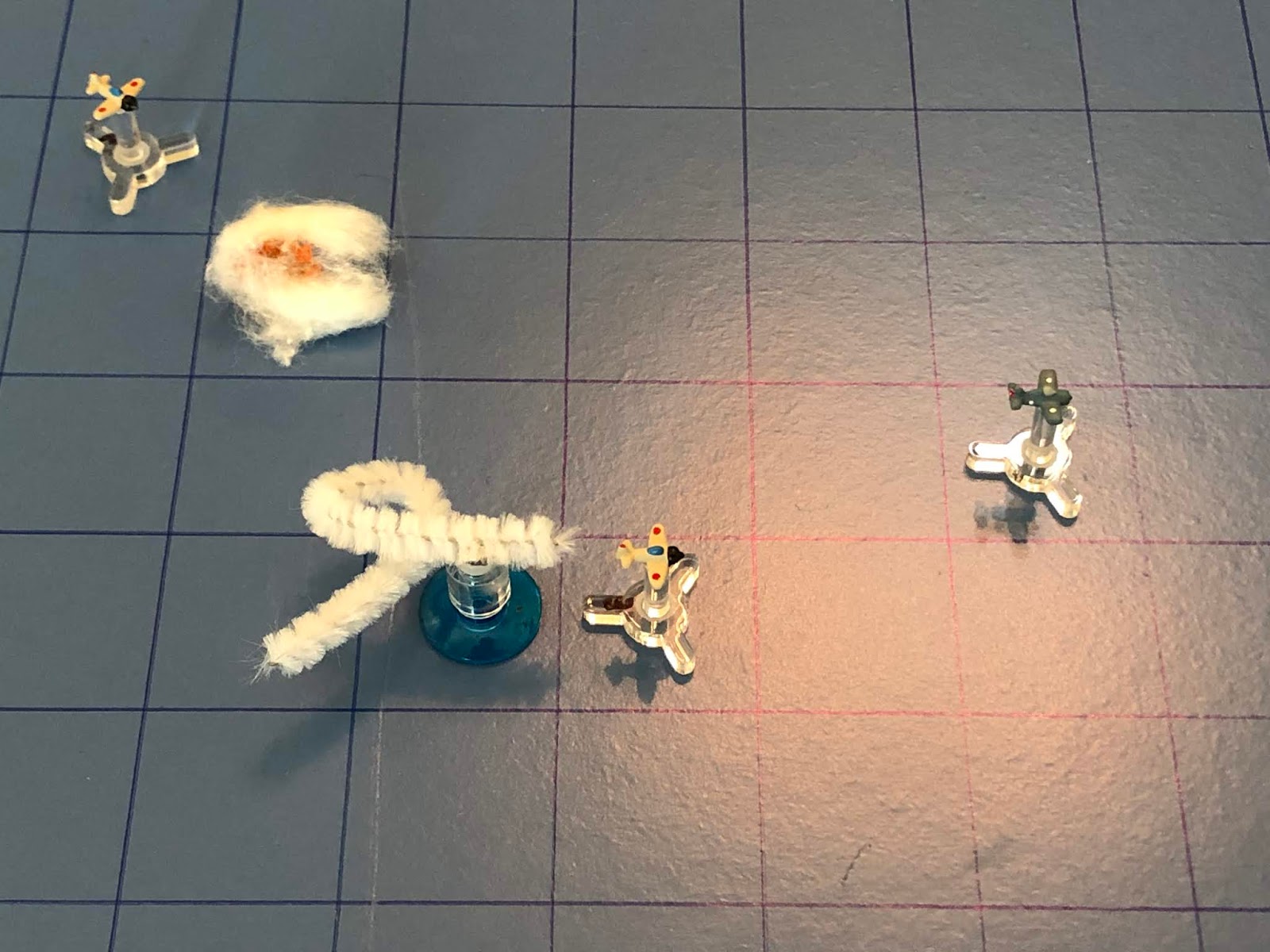 A Wildcat splashes into the warm blue water as a Zero pulls an Immelman, moving to splash a second. 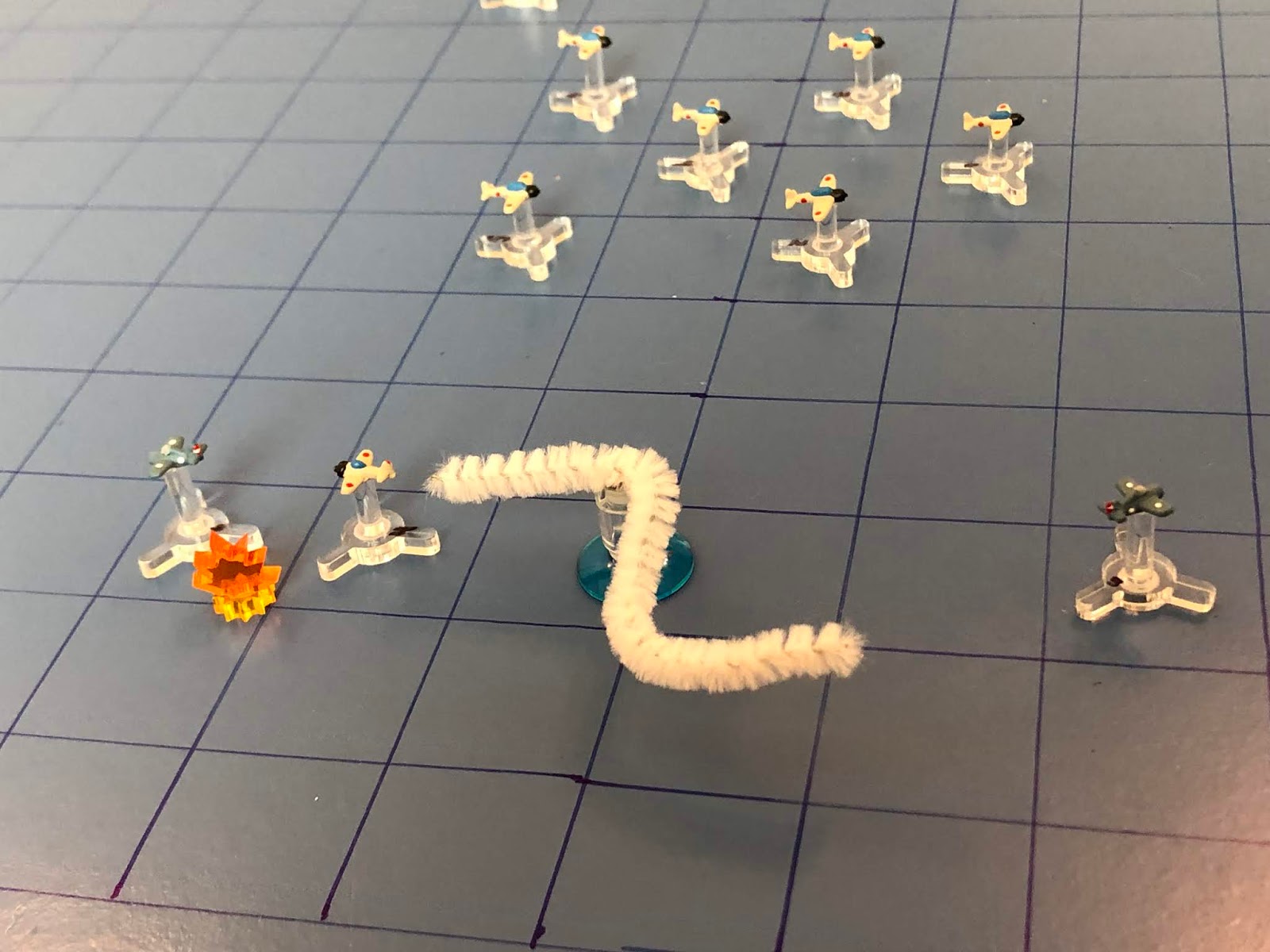 The Zeros continue to abuse the Wildcats, as the Kates press home their attack. 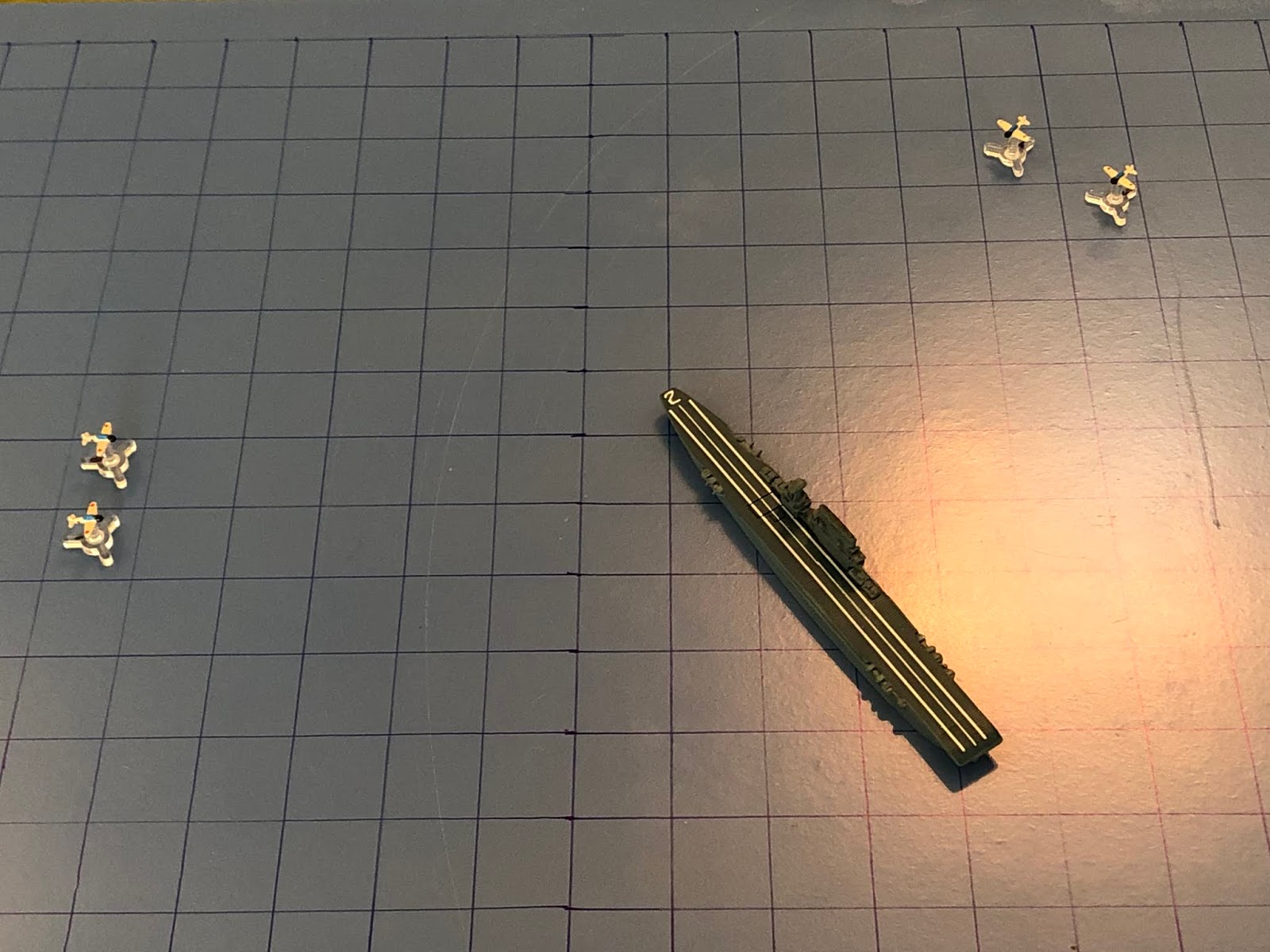 The Kates split their formation and execute a classic hammer and anvil torpedo attack.

To see how the fight went, please check the blog at:
https://oldleadbreed.blogspot.com/2019/09/coral-sea-day-2-fight-3.html

Out of the frying pan, into the fire: the FDO comes on the radio to rally all airborne Wildcats, vectoring them onto a new radar contact believed to be the Japanese strike group’s Val dive bombers, following the torpedo bombers in to strike the Yorktown and finish off the Lexington.

And that’s the next fight.