Kampfgruppe Peiper, a German SS Panzer formation, moved out as part of ‘Wacht Am Rhein,” AKA, “The Battle of the Bulge,” in the evening of 16 December, reaching Losheim at approximately 2200.  Fighting through traffic as they pushed west on the ‘rollbahns,’ Peiper grabbed a battalion of German Fallschirmjaeger sitting idly by the road (setting the stage for the iconic photo of the German paratroopers riding atop King Tigers), and, continuing their push west, the kampfgruppe overran a column of retreating American troops at approximately 0600 on 17 December.  At approximately 0745 on 17 December the kampfgruppe, having finally defeated a token platoon of Americans that had held them up for hours, got on the move.  They pushed north towards Bullingen and west towards Ligneuville, running into some issues due splitting their forces, making the questionable decision to have a company of Panthers push through some hilly, heavily forested terrain, and their artillery having a hard time finding the range.  And while both Panther companies and a Panzer Grenadier company suffered substantial casualties, the Germans were ultimately able to secure both villages and continue their push westwards.  Then, at 0600 on 18 December, the Germans found themselves in severely constricted terrain, with rivers, urban areas, hills, and heavy forest everywhere the eye could see, not to mention a few companies of American infantry, and that pesky Tank Destroyer company from the previous fight, as they attempted to blitzkrieg their way through the villages of Stavelot, Trois Ponts, and La Gleize.  Again the fighting was heavy, with American infantry putting up a desperate defense at a heavily wooded roadblock, though finally the Germans were able to break through.  Charging through the broken US defensive in the south, the German panzers rushed to La Gleize where they quickly overran a US mechanized company still mounted in their halftracks!  This collapsed the American right flank, forcing the remainder of the Yanks in the area to fall back.

It is now 0900 on 19 December and the push to the Meuse continues.  The Germans find themselves facing the Americans’ last line of defense anchored on a quartet of villages: Stoumont, Cheneaux, Targnon, and Habiemont.  This line consists of a company of US infantry manning a roadblock, a company of Engineers, and, once again, that pesky company of Tank Destroyers.  But the Germans are hard pressed; they’ve lost their heavy King Tigers, and their infantry have taken heavy casualties, with only half of the remainder still mechanized.  Aside from that, they must strike fast as the US commanders have finally responded to the German thrust and reinforcements in the form of an armored combat command and infantry from the 82nd Airborne Division are on the way.  Oh, and the skies are beginning to clear, which means those pesky Jabos will soon be about.

So, what’s going on here, you ask?  Well, this is a mini-campaign, and an unplanned one, at that!  This is to keep up my end of a bargain I made online; my buddy Thuseld, over on The Wargames Website, has been working on getting 6mm WWII forces together for awhile, just like me.  He’d posted pics of his lovely troops and vehicles, lamenting that he wasn’t sure when he’d ever get them on the table.  I replied that I, too, had been working on getting 6mm WWII forces ready, and I, too, was unsure when they’d actually see the table.  Then I made an off-hand comment that sealed my fate: I jokingly suggested he and I enter a pact, to ensure we got our 6mm WWII forces on the table ASAP.  Well, he not only accepted, he played some games and posted them that very next weekend!  So I’m already late, but late is better than never, so here I am, keeping up my end of the deal!  My plan is to play a three-game mini-campaign, and it’s not just serving to get my 6mm WWII stuff on the table.  I’m also going to test out the Blitzkrieg Commander IV rules, and I’m also, for the first time ever, going to play some winter games.  So here we go!

Wanting to play some winter games and having late war German and US/UK kit, I began searching the internet for scenarios.  Twasn’t long before I came across a free PDF from Battlefront, called “Peiper’s Charge, Running the Gauntlet in the Ardennes, 16-25 December 1944.”  It’s not perfect, but it’s pretty damn useful, and it was perfect for what I was trying to do: three fights in the snow between late-war US and German kit.  Sure it’s built for Flames of War, revolving around platoon-sized units, but I just bumped each of those up to a company-sized unit, no problem.  In any case, the PDF outlines a mini-campaign with the Germans attacking across the three maps, ending with the Americans counterattacking on the third map.  Worked like a charm. 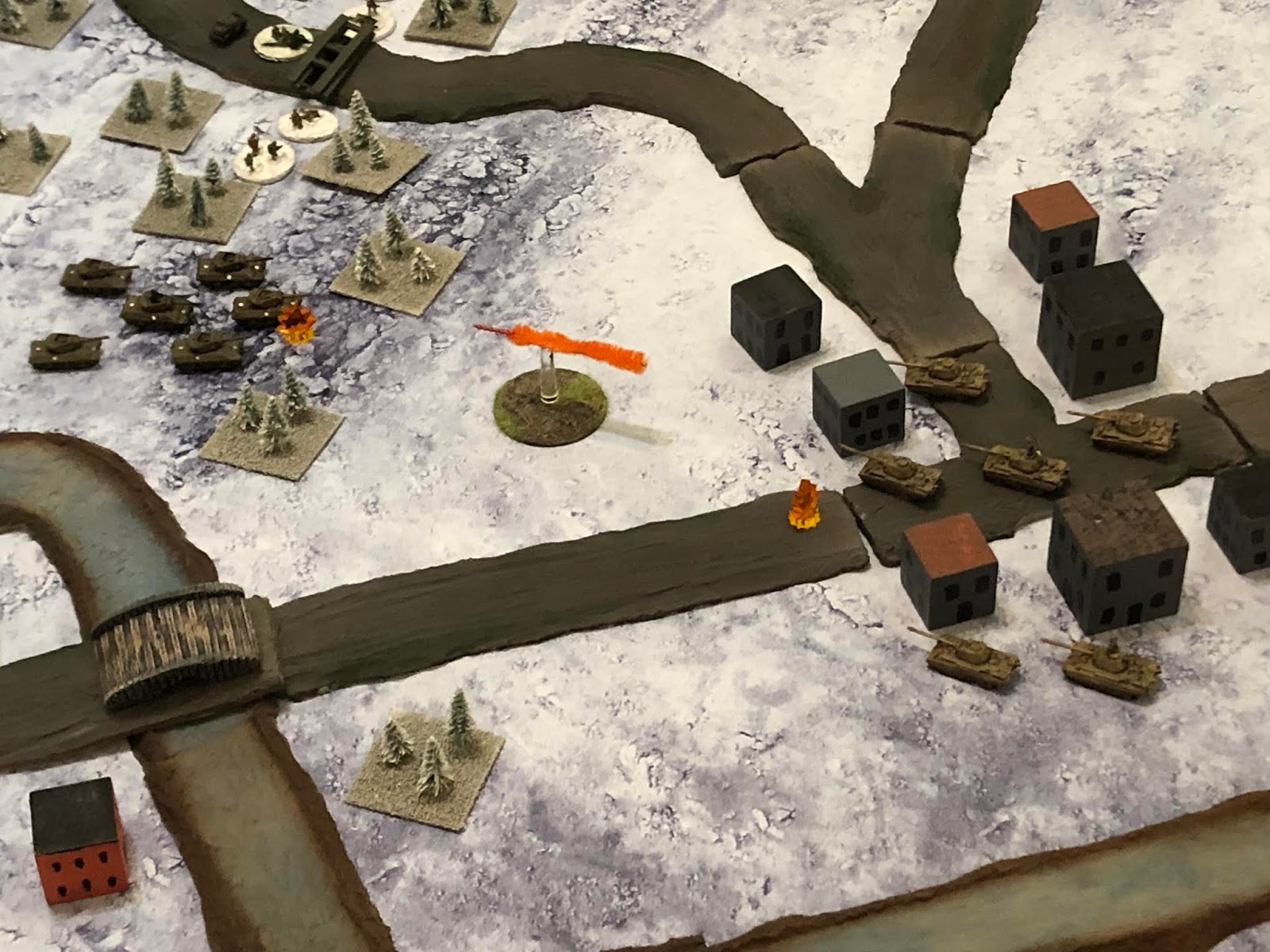 Incredibly ferocious fighting breaks out in and around Stoumont. 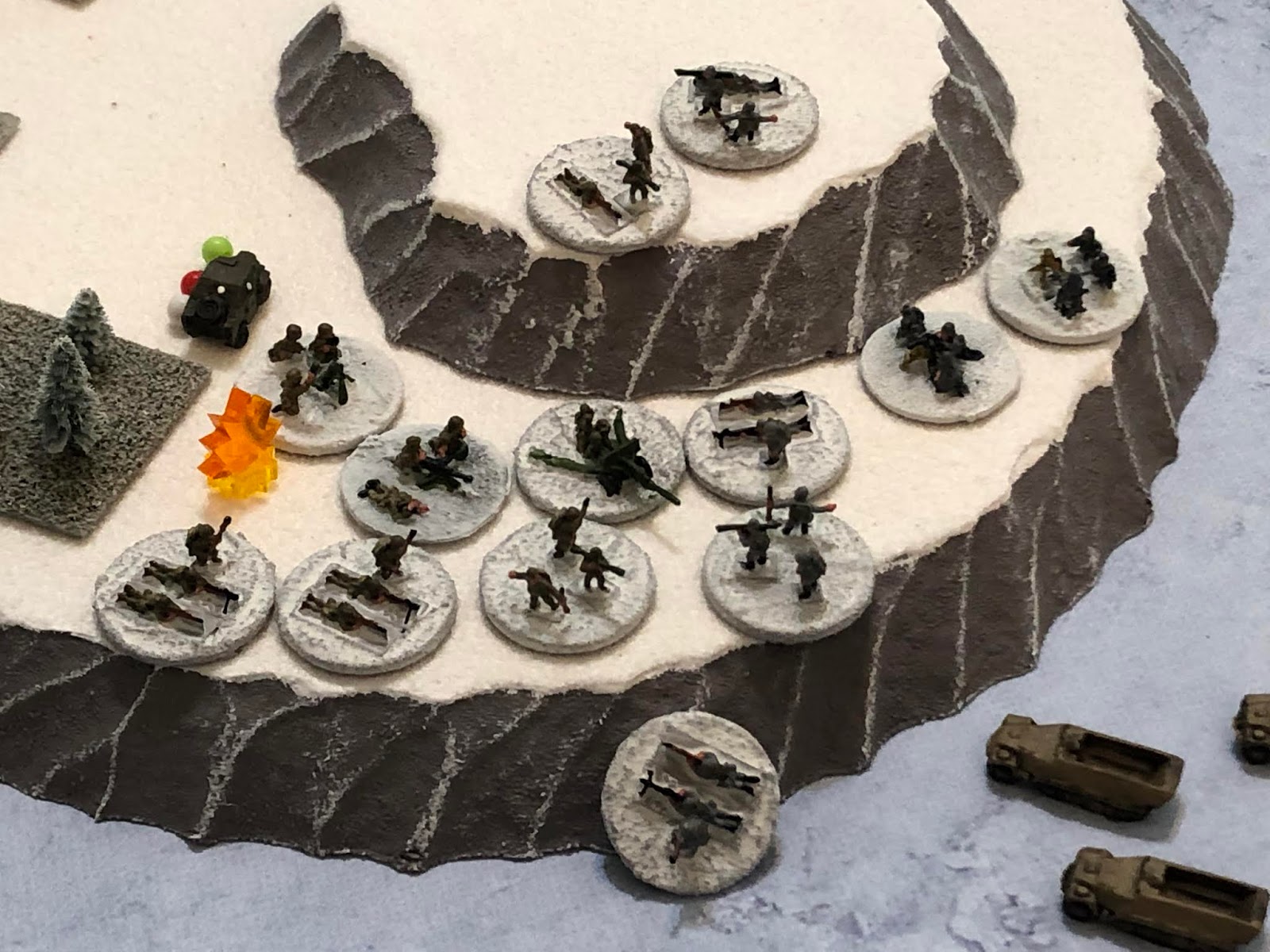 While in the south, German Panzergrenadiers move up to forcefully evict a company of the 82nd Airborne from Hill 63. 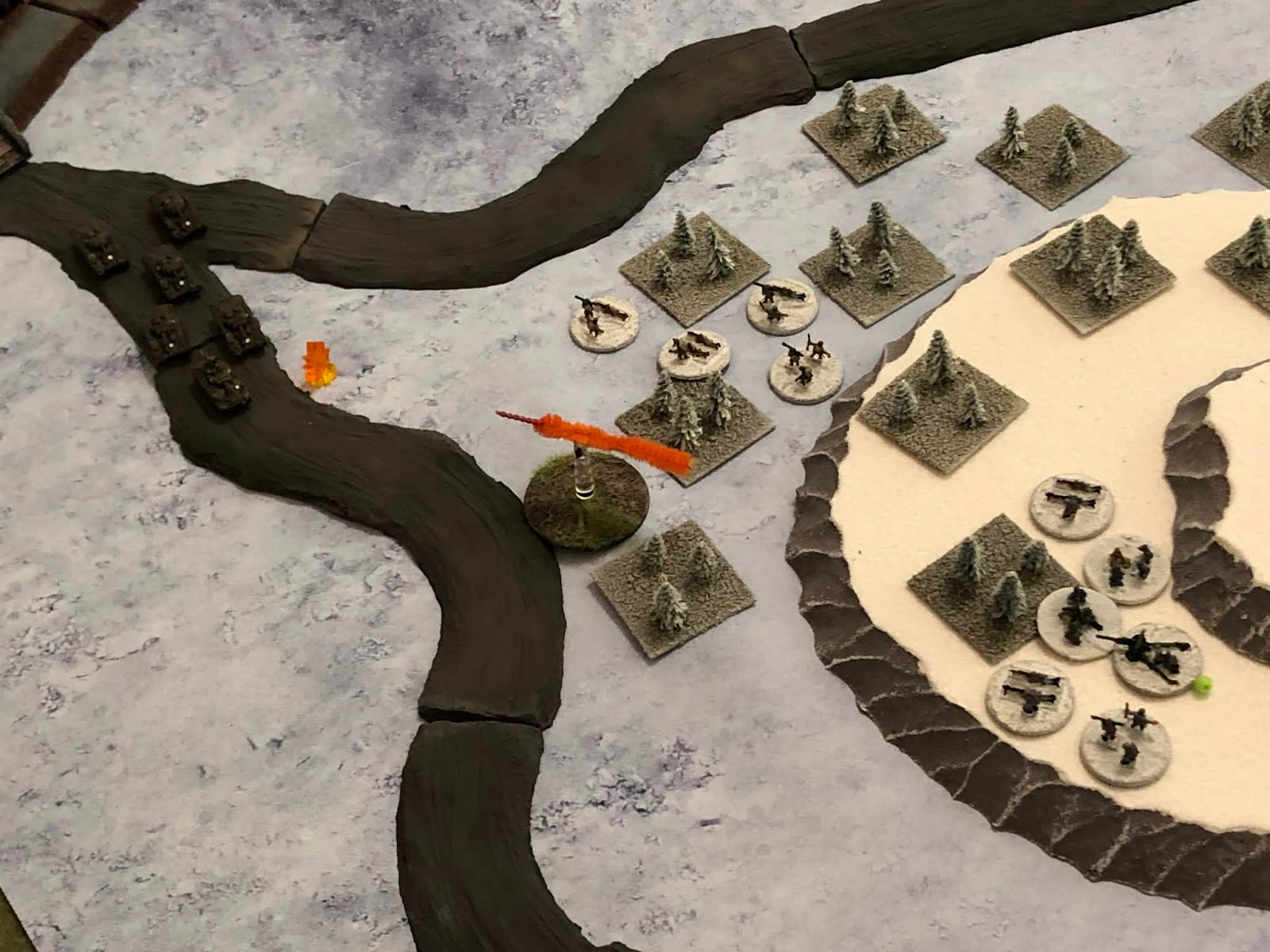 And after they see them off, they begin pounding a nearby column of Shermans with their anti-tank guns! 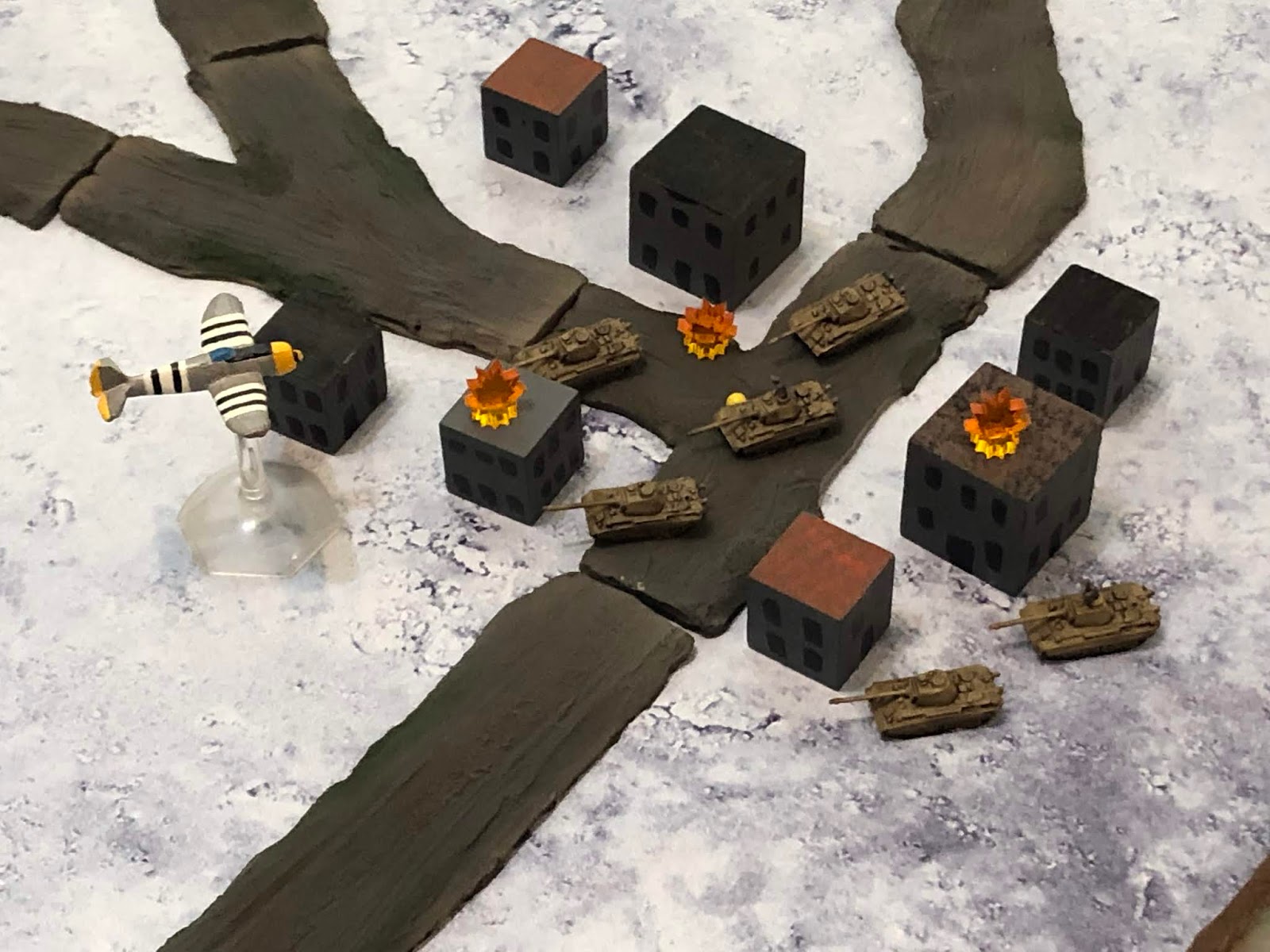 Which is great, until the Jugs appear.

To see how the fight went, please check the blog at:
https://hakunamatatawars.blogspot.com/2019/09/charge-of-kg-peiper-3.html

Wow, what a fight!  What a series of fights!  It’s true that I was a bit unhappy with how long the first two games were taking, but make no mistake, they were still fun, and this one was an absolute blast!  I think I’ve found my BKC mojo, the changes we made fit our way of gaming pretty damn well, and I can see us (and me, solo) using these quite a bit with our 6mm stuff.  The only issue is, now that I’m using ‘battlegroups’ as single entities, it really feels like I should re-base my 6mm stuff.  Again.  Actually, it would be the fourth time some of these bad boys have been based/re-based…

And the mini-campaign concept worked like a champ, gave us everything we needed for a great set of games.  Even though I managed to go a perfect 0 for 3!  It was well worth it 😉

So, lots to do, too many projects going on (as usual), but gotta pack this winter stuff up and get back to finishing up my Coral Sea dogfights and my “Platoon” (the movie) fights, then we’ll see where we stand.  As always, more to come.