Yesterday morning, Lt(jg) Casey led the fighter escort for the Lexington strike force which, combined with the Yorktown’s strike force, managed to sink the Japanese light carrier Shoho. But the Killer Pelicans’ escorts had a rough go: they downed three Zeros and damaged another, but they lost one Wildcat, had the other three damaged, and five of their six assigned dive bombers were shot down, the sixth returning to the Lexington, damaged. Lt Casey scored two more kills to become a Veteran (total of four kills), but he was shot down and badly wounded, which will cause him to miss the Battle of Midway.

Both sides carried out preparation for battle throughout the night, then launched scouts shortly after 0600 the next morning, to find the other side’s carriers. The Americans got lucky first, sighting the Japanese carriers at 0820, though the Japanese were only two minutes behind. Both sides hurried to turn into the wind and launch their strike groups! The Japanese launched 18 fighters, 33 dive bombers, and 18 torpedo bombers, while the Yorktown and Lexington launched a combined 15 Wildcats, 39 Dauntlesses, and 21 Devastators, though the Lexington’s contingent was about 10 minutes behind the Yorktown’s.

At 1055 the Lexington’s air search radar acquired the inbound Japanese strike group at a range of 68 nautical miles and vectored nine Wildcats to intercept; it was 1113 local time when Lt(jg) Fitzsimmons again led the Lexington CAP into battle. And this time he found the enemy, but it didn’t work out very well for the Americans. Lt Fitzsimmons and Lt Allen saw their aircraft damaged, Ens Chipman had to disengage and retreat, but that wasn’t the worst of it. Three Wildcats were shot down, with Ensign Camili being wounded, but Ensigns Gordon and Mann were killed in action, while no Japanese aircraft were shot down, and enemy torpedo bombers managed to put three torpedoes into the USS Lexington.

At 1123, radar contact acquired another Japanese strike group, comprised of Val dive bombers escorted by Zeros, and vectored the Lexington’s Combat Air Patrol to intercept. The six Wildcats charged headlong into the Japanese formation, suffering two aircraft lost (and one pilot KIA) and one damaged in brutal action that saw Ensign Head awarded the Navy Cross for shooting down four enemy aircraft! Lt Allen added another two kills, and Ensign Chipman added one, with the rest of the Japanese aircraft breaking off the attack, so not a single Val dive bomber was able to press home the attack. However, the Lexington is still in trouble caused by the torpedo hits earlier.

At 1130, LtCmdr Case led a four-ship escort for “Scouting Two’s” SBD Dauntless dive bombers to attack the Japanese carrier Shokaku. The Japanese CAP was successful, shooting down four of the SBDs and forcing the last two to return to base, damaged, though they lost four of their own (two to defensive fire from SBDs!), with LtCmdr Case and Ens Riggins both scoring kills.

At 1140, LtCmdr Case re-formed his flight of Wildcats and had them escort Bombing Two’s SBD Dauntlesses into an attack on the Japanese carrier Zuikaku. In a wild fight that saw two Dauntlesses shoot down enemy Zeros, then four Dauntlesses arrive over the target but fail to land a single bomb on the target’s deck, LtCmdr Case’s fighters came through unscathed while downing a single Japanese fighter.

It is now 1150 and the remaining members of the Lexington’s CAP, Lieutenant (Junior Grade) Allen, Ensign Chipman, and Ensign Head, are watching as the Japanese strike group that just hit the Lexington is forming up and turning north, straight into them. Lt Allen calls “Tally Ho!” and the three Wildcats zoom in to take one last running shot at the enemy strike group. 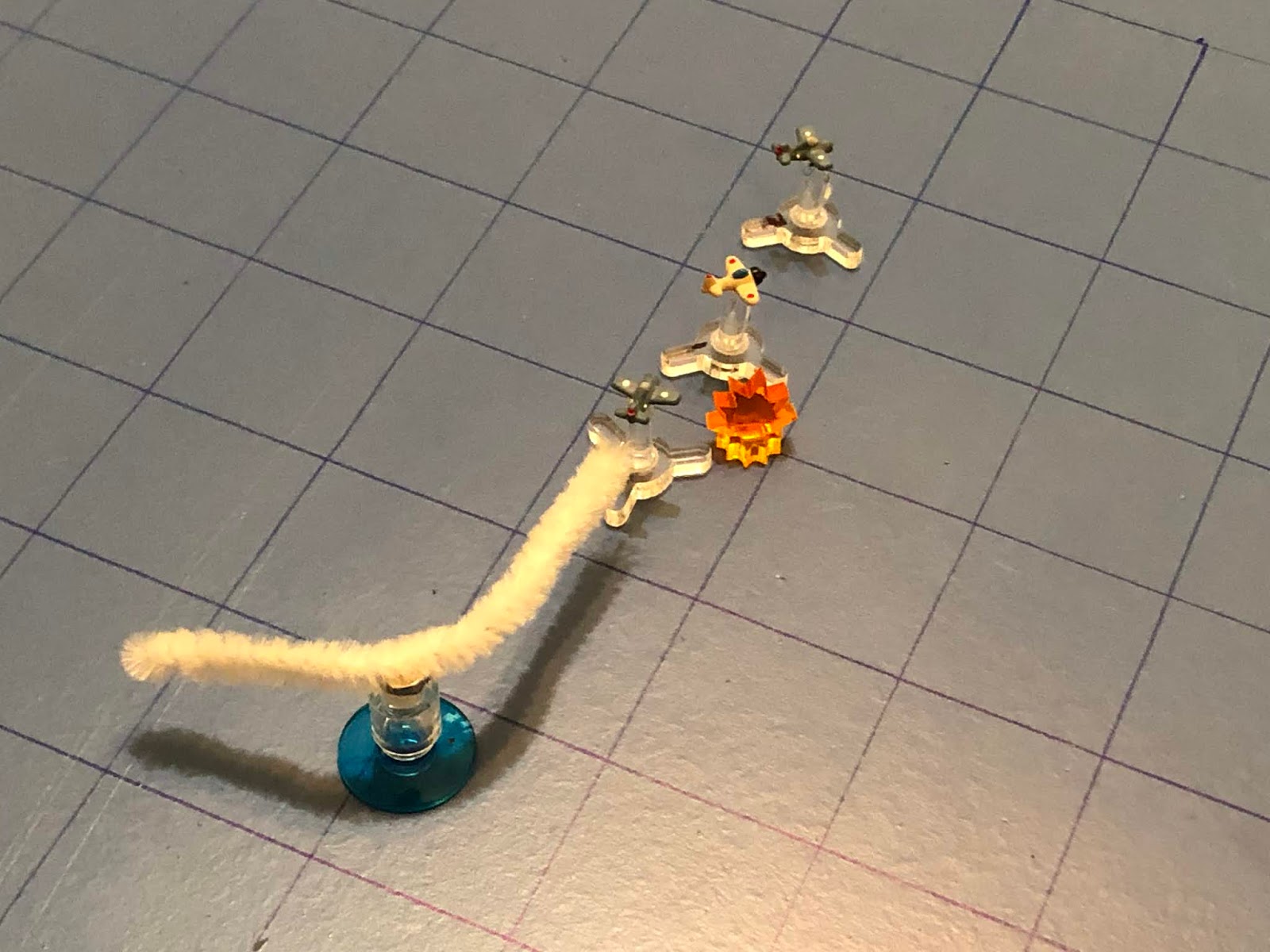 Lt Allen jumps on Zero 01’s tail and gives him the what-for. 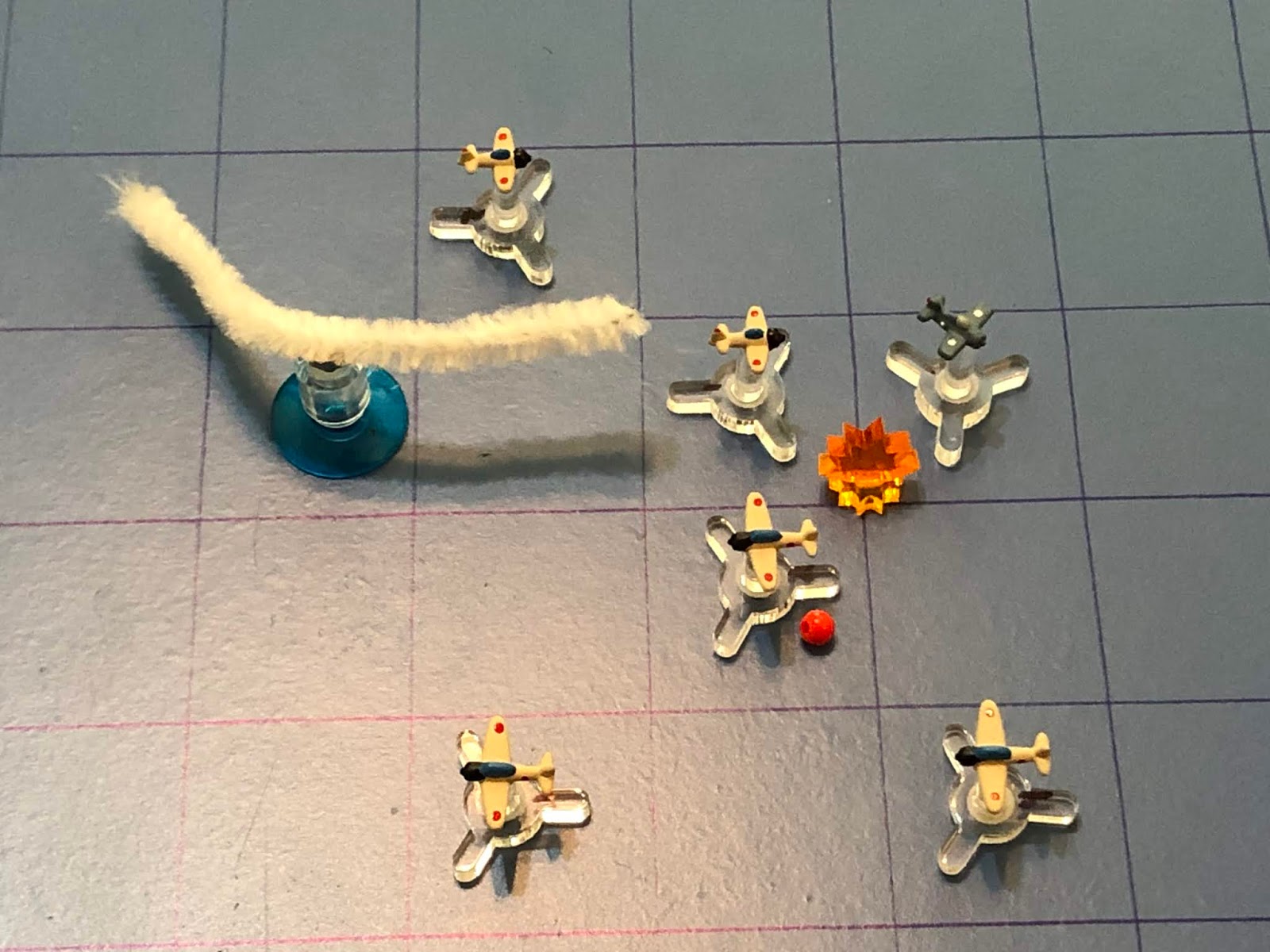 But later, Zero 01 gets the chance to return the favor.

To see how the fight turned out, please check the blog at:
https://oldleadbreed.blogspot.com/2019/10/coral-sea-day-2-fight-7.html?m=1