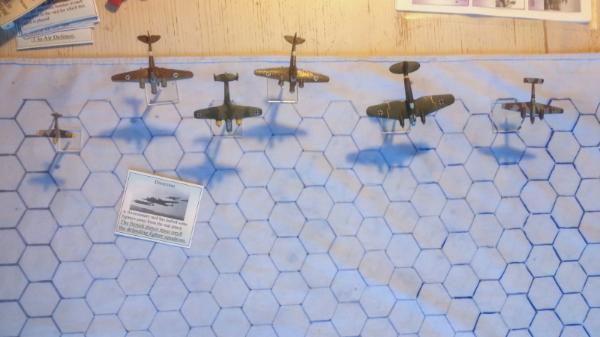 So not liking the idea of fending off a full squadron of Spits I used my “Diversionary Raid” card and made the boy re-roll that. The result came up.

So the boy pulled out his card from last time and Scrambled the Defiants! Making it
BF3 X1 Hurricane (Ace Flight Lft”Tommy” Tomlin.)
BF(desperate) x3 Defiants. 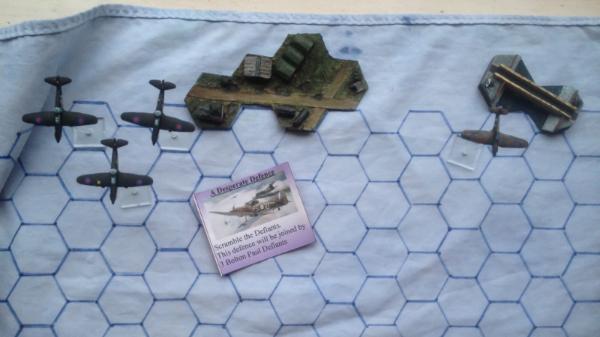 Rules for Defiants.
Movement D6
May attack any adjacent hex in any direction requiring a 6 to hit.

Now on with the battle

“You’re sending what?” Tommy wasn’t at all sure he’d heard the lady at fighter command correctly. Did she just say…”Defiants?” He repeated “Bolton Paul Defiants?”

“They told me you were scrambling Spitfires!” Tommy was at a loss, “What happened to Biggin Hill?”

“They had to be diverted west. There’s another raid heading for the Isle of Wight.” 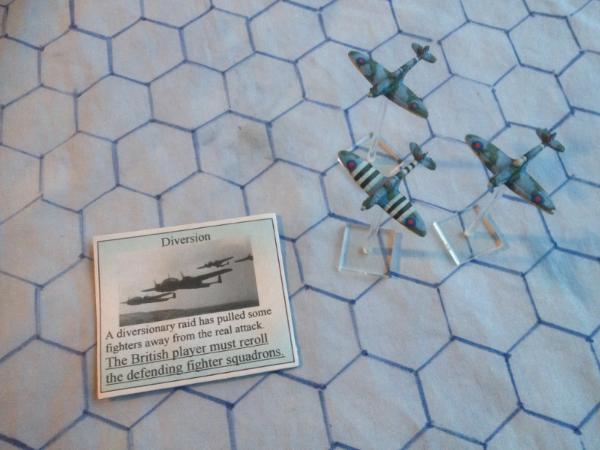 Tommy didn’t complain. He knew things were tight all over , but taking on a bunch of Luftwaffe raiders singlehanded while babysitting a squadron of Daffys wasn’t his idea of a fair fight. It was a bit of a sticky wicket.

“RAF Manston reports they scrambled six minutes ago. They should be with you soon.”

“Roger that Fighter Command. I’ll keep an eye out.”

Tommy kept on climbing steadily on his intercept heading south east. A long lonely patrol, all the while watching for enemies ahead and his support coming in from the north.

Soon enough he made visual contact. A mixed flight of German bombers accompanied by a couple of escorts already over the channel and heading inland. 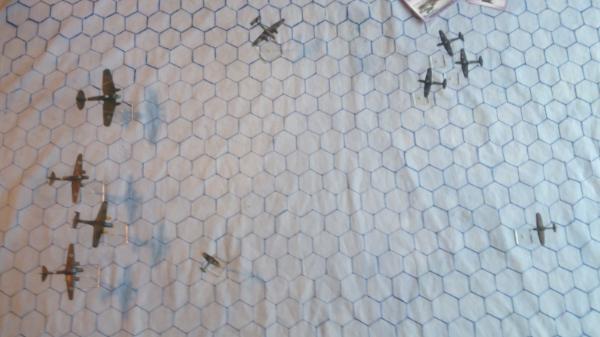 A flicker of movement caught his eye down to the right. It was 264 Squadron, already on an attack course and closing on target for the bombers. And judging by the movement of the German escort fighters Tommy wasn’t the only one who’d spotted them.

“Gordon Bennett, here we go.” Tommy throttled up and angled his attack to approach from the sun trusting to his luck that the German would keep looking the other way. 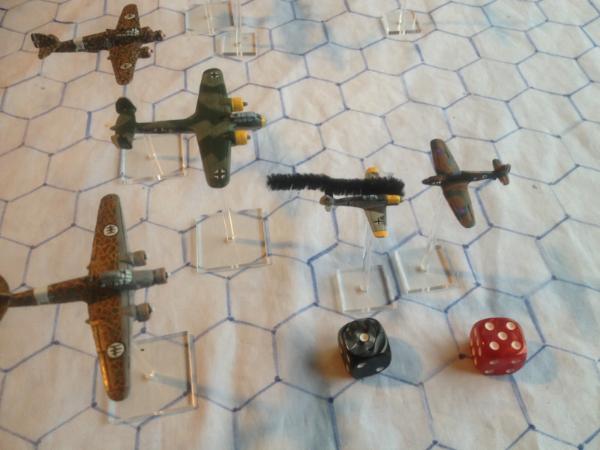 His luck held. Speeding over the top of the enemy fighter he placed a solid burst of machine gun fire along its full length nose to tail before turning immediately upon the bombers. 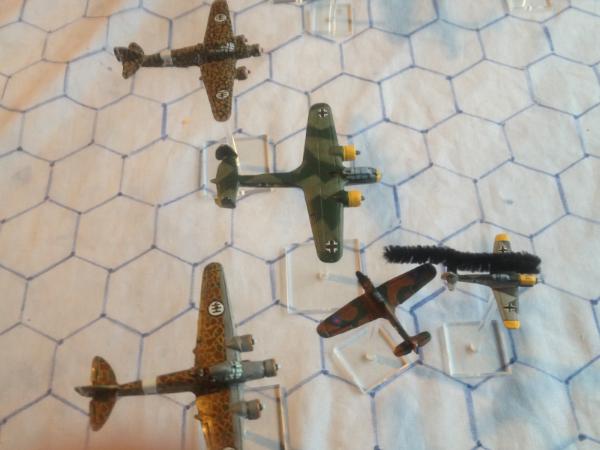 “Sorry to drop in unannounced, fellas.” he radioed over to the Defiant squadron. They were already closing upon a Heinkel out on the edge of the formation. 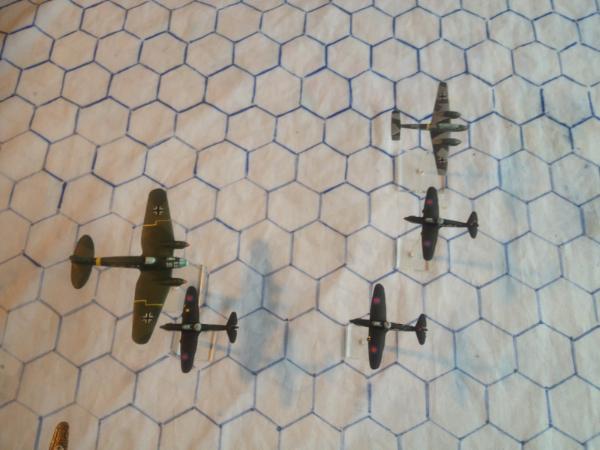 But it wasn’t alone. A waiting Me 110 was poised to strike and it dived on the rearmost of the Defiant squadron. 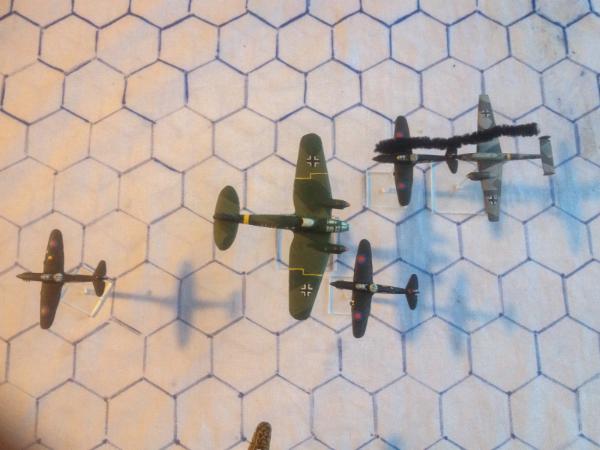 He delivered a solid punch with the 20mm cannon before the Defiant’s gunner scared him off. 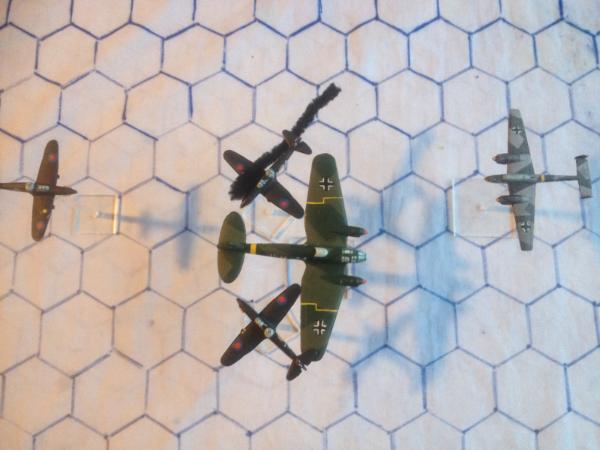 The turret fighters circled their chosen prey but they had only seconds in range at such closing speeds and soon the enemy Heinkel had passed them by unhindered and still on target for the drop.

“264 Squadron come in.” Tommy called again. “Are you getting on alright?” Tommy fell upon another bomber, 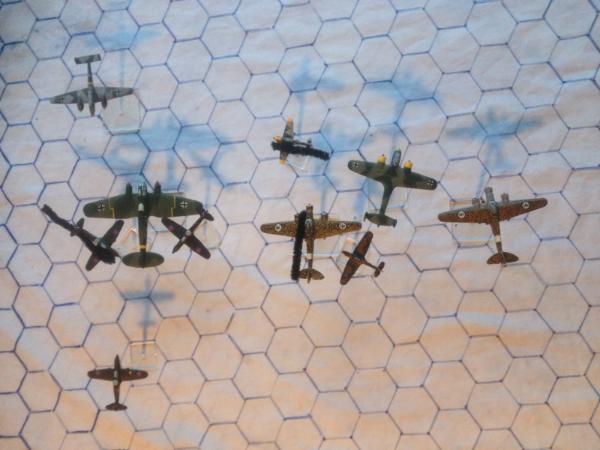 this time scoring a solid hit leaving one propellor feathering in the wind.

“This is Flight Lieutenant Don’t worry about us.” Came a terse response, “We’re coming around for another go.” 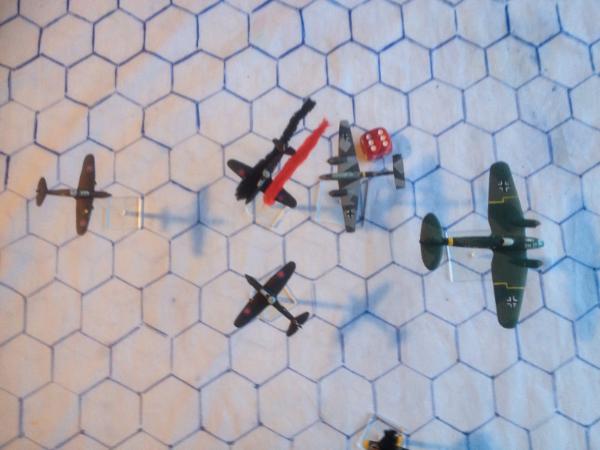 Falling in behind its chosen mark once again but this time keeping low to avoid the return fire, the German heavy fighter closed in and finished the job.

“They’ve had it, gents.” The Defiants’ flight leader cut in “You pair get on after those bombers.” He ordered, “We’ll deal with that one.”

“Defiants, look out.” Tommy called in, “you’ve got one coming in behind.” 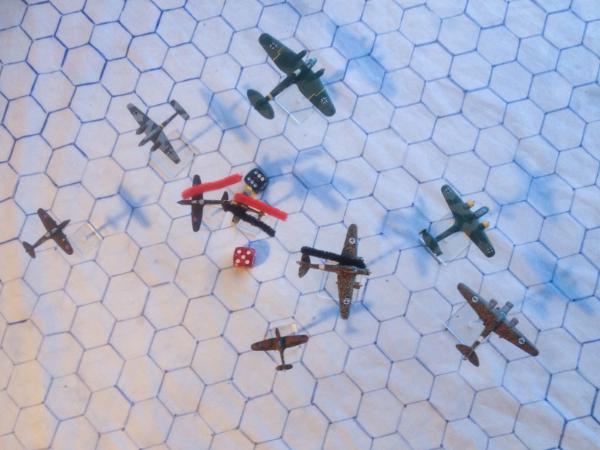 The German fighter fell in on the rear of the British plane mistaking it for another Hurricane. Even as his nose cannon found its mark he was caught by a surprising barrage of return fire from the forewarned Defiant. Both aircraft suffering all they could withstand fell to the earth in ruin.

The two airmen in the lead Defiant redoubled their efforts and moved in on the last remaining German fighter. 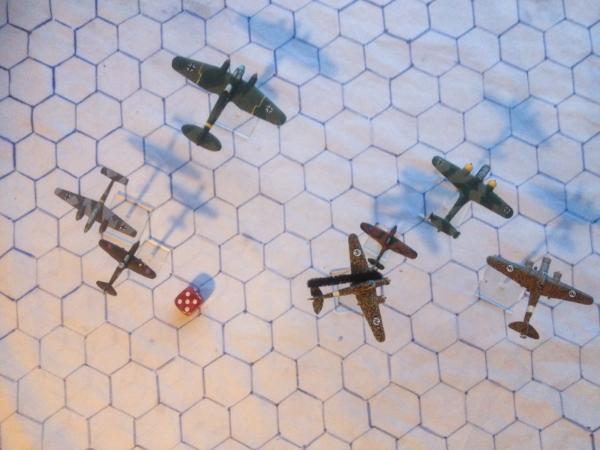 It jinked and managed to evade their fire.

Neither had Tommy time to mourn the loss of two more RAF airmen, 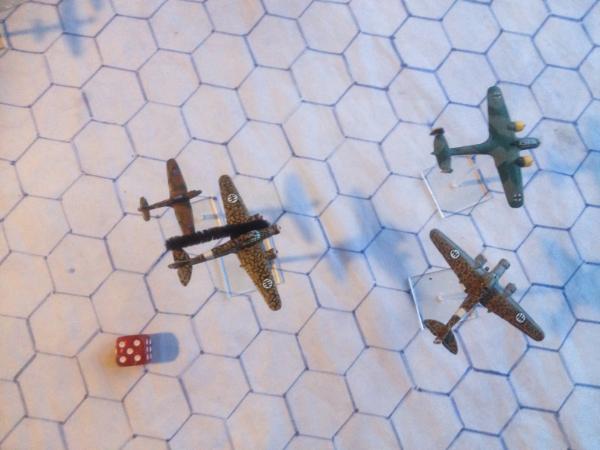 he was busy dodging defensive fire from the nearest bomber. 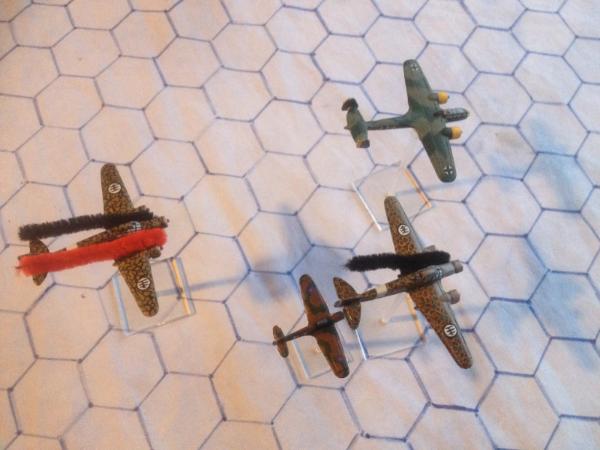 He rolled up over the top of it and gave it what for before moving onto the next one.

“I reckon we got him that time!” It sounded like the gunner in the last remaining defiant, a Londoner. 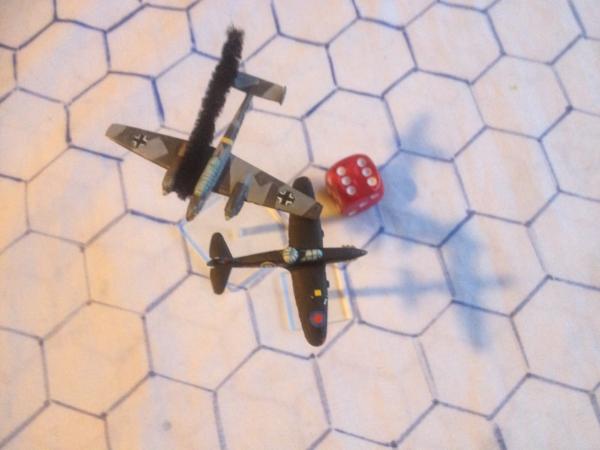 “That’s another bomber going down too.” Tommy added, “I can’t get ’em all though.” 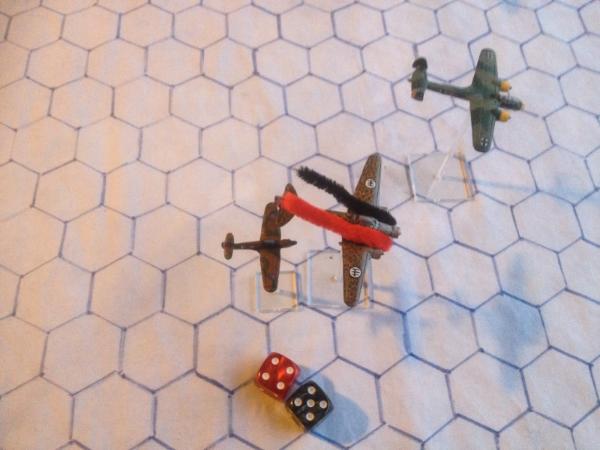 Far above out of reach the lead bomber continued on apace. 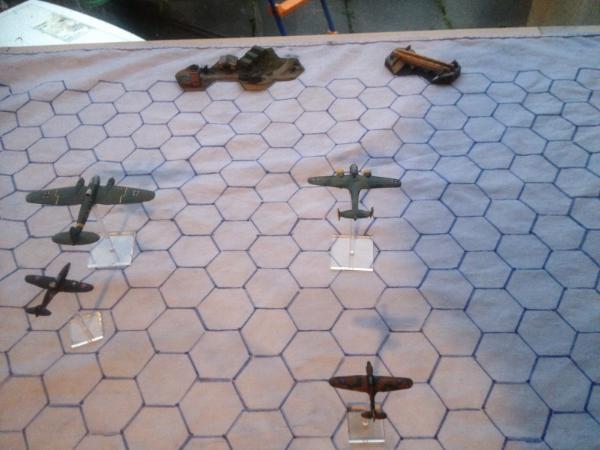 The pair of British defenders beat a desperate pursuit of the last remaining bombers. The Defiant had the advantage though, trading some altitude for speed they dived in on the tail of the target bomber, utterly contemptuous of the defensive gunners. Dropping underneath the belly of the bomber their quartet of Brownings made a most persuasive argument in their favour compelling the raider to break off its attack and return to Earth with immediate effect. 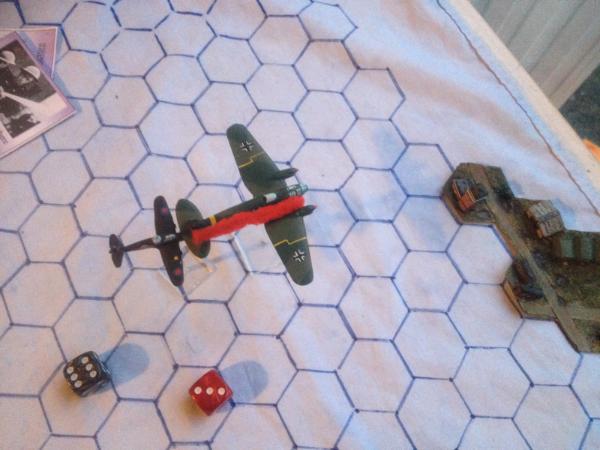 Tommy had no such luck. He had already lost too much altitude chasing his last bomber down and now had a hill to climb to reach the final raider. 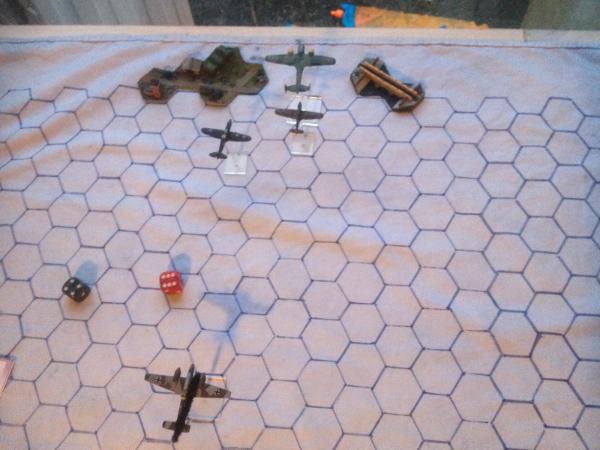 Even pushing his engine as hard as he could he closed with the old Dornier at a glacial pace.
“Come on! Come on!” He begged. Tommy would’ve reached out of the cockpit and whipped it with a riding crop if he thought it would help. But suddenly to his horror the bomb bay opened. He fired off a desperate burst of 303’s but he was too far out of range and his ammunition was finally spent. All he could do was watch as the bombs fell and the Dornier turned for home.

So there you have it. Another blow for the Brits this round as another bomber gets through. Though crucially only one bomber. 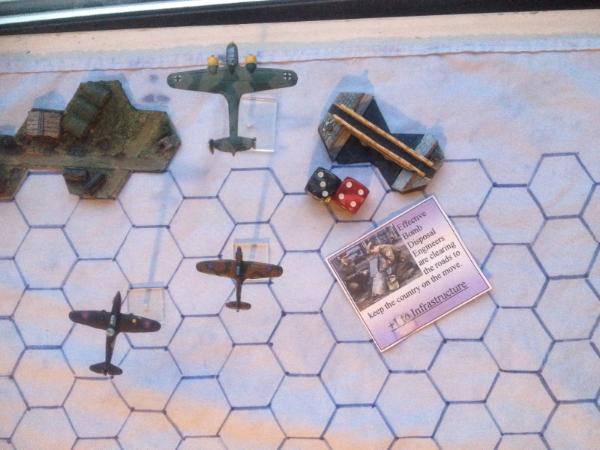 He rolls the standard two D6 for a twin engine bomber and scores a respectable 7. But the Royal Engineers respond quickly and manage to defuse a time delay bomb reducing the damage down to 6. 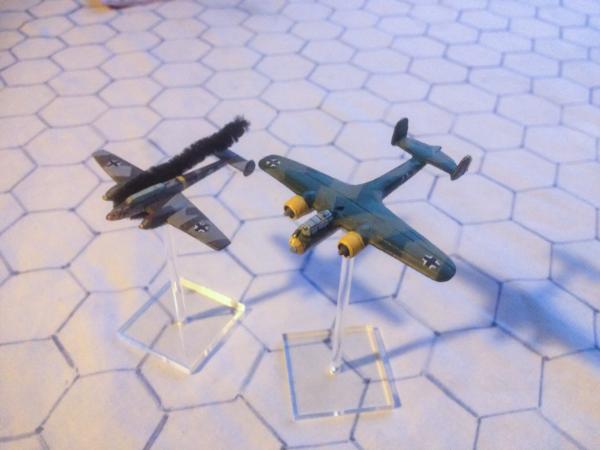 The raiders limp home, one victorious Do 17 and a homesick Me110. Keeping a couple of squadrons live on the German rosters.

And the celebrated Ace, let’s give him a promotion and maybe a VC after all. Wing Commander Gerald “Tommy” Tomlin adds another pair of victories to his tally bringing him up to 8. 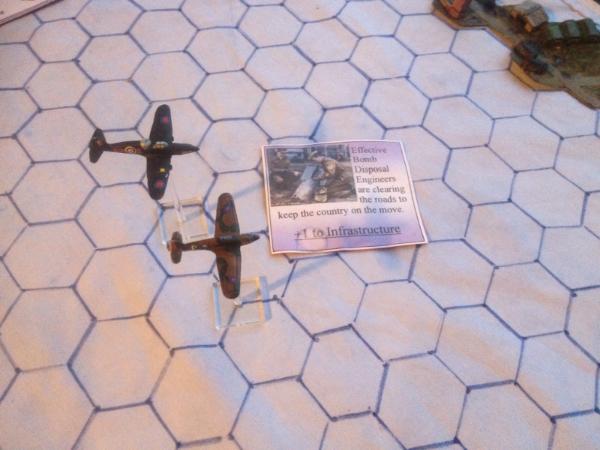 And then we have one surviving Defiant who rolled spectacularly well in the final turns not only damaging the Me110 and thus hampering its pursuit but then chasing down and destroying a bomber. What a team those guys are!

So with that the UK is against the ropes now with only 6 points of damage on one target standing between survival and starvation, or eventual capitulation to the Third Reich.