Period authors tended to put information about cavalry, infantry and artillery speeds peppered throughout treatises and studies which makes it frustrating to dig it out.  Battle reports do the same thing, giving the information where pertinent or known rather than in a table. Most all cavalry and infantry regulations and manuals have that information about expected movement rates etc.  Happily, most all are available on google books or archive as are the books below.  Nafgizer in his Imperial Bayonets collects some of this information.  Nafgizer and Naval and Military Press also publish a number of the period books such as this one…. It is an exception, where the movement rates etc. is the primary topic of a period book:

A Series of Military Experiments of Attacks and Defense…with Infantry, Cavalry and Artillery made in Hyde Park in 1802 and on the Island of Jersey in 1805…  by a Lt. John Russell, 96th Regt.   [and that is just a part of the title]

In it he carries out a series of experiments in movement and time. For instance,  Experiment 3d has cavalry advancing on infantry, starting at 400 yards, being given the orders to trot, gallop and charge at different distances, while the soldier fire.  The result was that the cavalry covered the distance in 49 seconds and the infantry got off three shots.  Half the book is analysis, remarks and then notes where the results are compared to other contemporary authorities.  Here is the face page diagram: 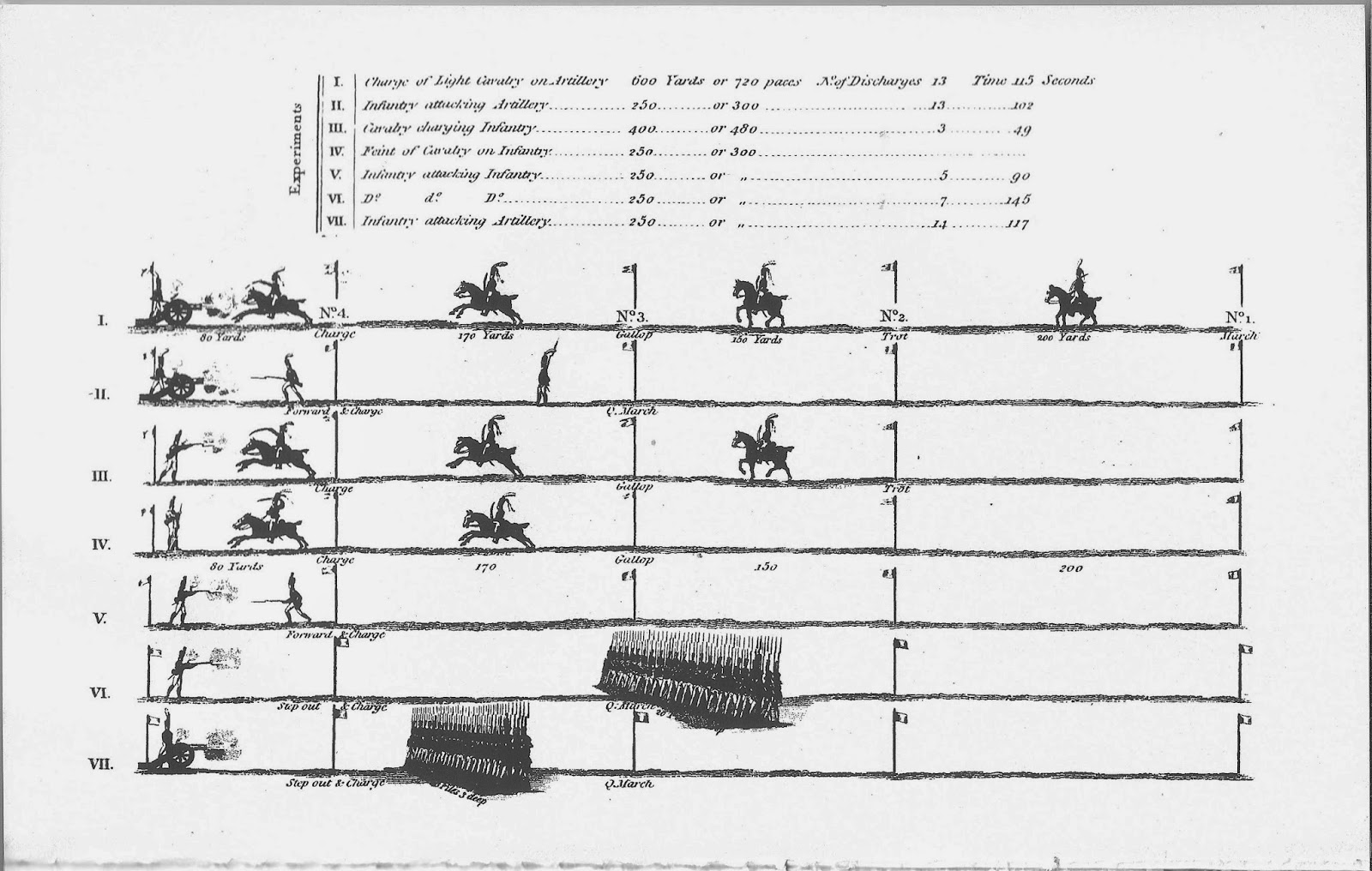 Note the ‘quick march’ and then ‘step out’ and charge… which was a longer stride.

Military Field Pocket Book by Sharnhorst 1798 and 1801 translated by Captain Haverfield 1811.  In the appendix he writes down the rate of march and movement for infantry and cavalry.

For instance, page 7 of the Appendix:

“A small detachment may gallop for 5 minutes without halting, if the horses are in good order.  Thus, calculating 500 paces to each minute; 2500 paces can be performed in 5 minutes.  When the above distance is to be exceeded, it is necessary to move at a trot, which however cannot be continued above 1/2 hour.  A part of cavalry many perform 300 paces in 1 minute, 6000 in 20 and 9000 in 30 minutes at a trot.  Thus a common German mile (4 English miles) may be performed in 1/2 or at the utmost, 3/4 of an hour, provided the party is to halt immediately afterwards.

Treatise on the Science of Warfare in two volumes 1805 by Colonel de Vernon was vetted by a panel of French Marshals before it was used as a text to train French army officers at the Polytechnic. It has such information peppered all through it as well as tables about times and distances,  even the distance at which to deploy for battle.

There are a number of military treatises written between 1800 and 1815 [and dozens after that] which provide the sources for historical movement rates.  I’ll list those in a later post.  There are a number of methods for determining the rates from battle reports and the like.  Just one instance.  For instance, Bernadotte on the day of Jena moved only 8 miles in six hours.  This was viewed by Napoleon and his peers as criminally slow.  By comparing that to the movement during the day of other corps as well as before and after the day, you not only get an average rate, but also what were considered extremes… and inexcusable extremes.   The same is true for the battlefield.  Again, you get a clear range of expectations to work with.