It’s 1800 on 9 July 1943 in western Russia, where the German 507th Infantry Regiment of the 292nd Infanterie Division is scraping out hasty defensive positions in preparation for a counterattack by the Soviet 1061st Rifle Regiment and armored elements of the 1442nd Heavy Breakthrough Artillery Regiment.  Cut-off, alone, outnumbered, and low on ammunition, this should prove to be tough sledding for the German infantrymen.

It’s been a little bit of an issue that I literally just sold off a bunch of German late war gear, so I’m a bit understrength, but Steve is working with me to make sure the fights I get match up with the forces I have. This is the first fight I’ve played, and I hope it wasn’t too much a pain for him, I certainly want to keep going! First, I love to play games; second, it’s been way too long since I’ve played any Eastern Front games (maybe eight years or so?); and lastly, I’m a solo gamer that still craves some comradery, so whenever I can help another wargamer out, I’m always quick to jump at it. 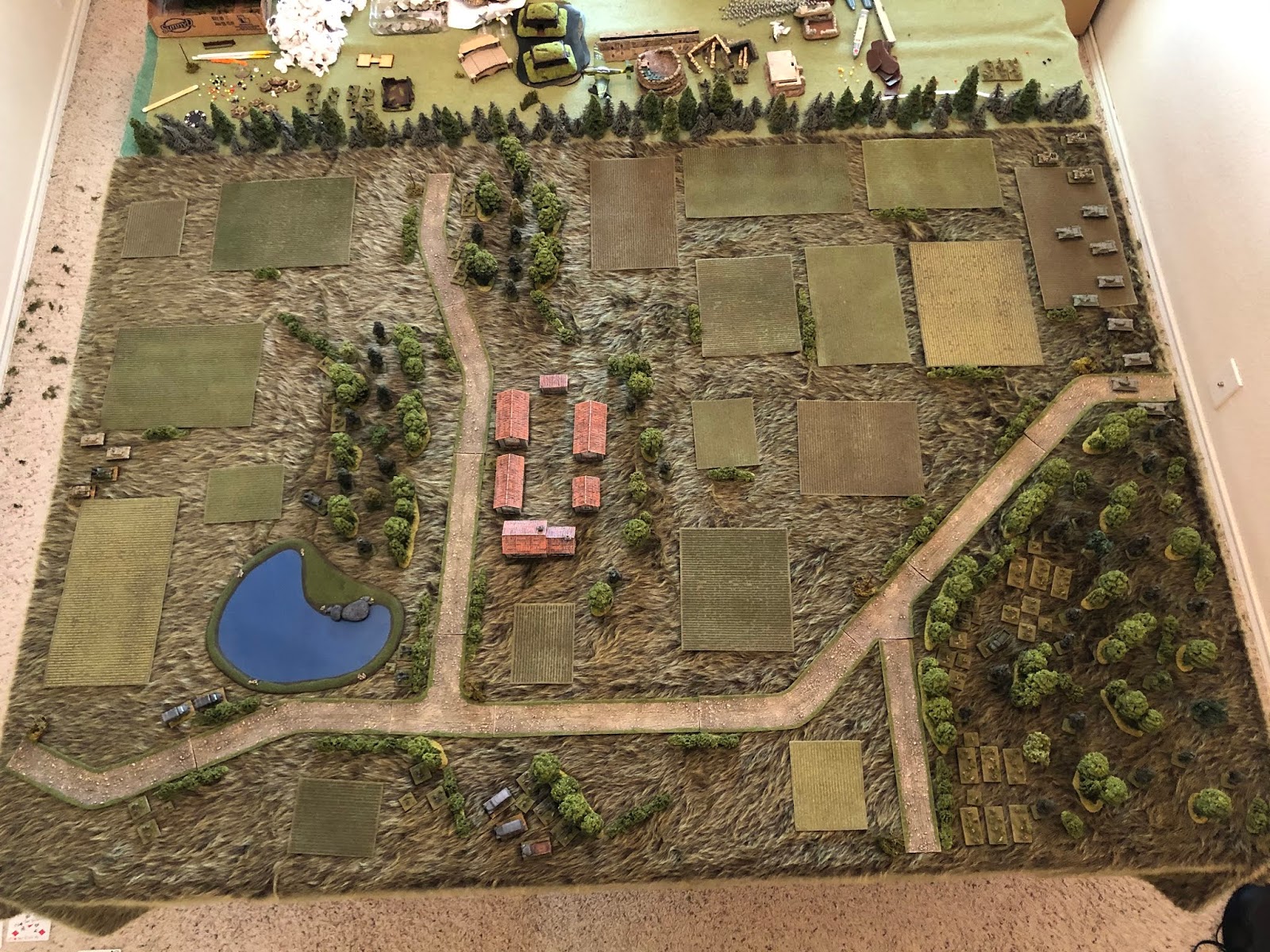 Overview, north is up.  The objective is the village of Snava, a Soviet supply depot, at center left.  You can see hardball roads running all over the place, and a water treatment pond at left.  The forest called “Birnenwald” is at right/bottom right, and other than that it’s a couple patches of wood (top center left, left, with a stand at bottom center and a strip just east of Snava) with cultivated fields throughout.  This is the third fight at Karpunevka; the first saw a desperate Soviet defense throw back the German attackers, before the Germans were able to rebound and throw the Soviets out on the second try.  The Soviets have attacked north, past Karpunevka (would be off camera to top), cutting the German forces here off from supply, and are now coming back to eliminate the pocket.  Technically speaking, all Soviet forces should enter the map from the northwest (top right), which is where the counterattack is coming from on the campaign map, but I’m allowing Soviet infantry to attack from right/bottom right as well, figuring they infiltrated via the Birnenwald which, off camera to right, actually extends further to the north/northwest.

This is a Soviet hasty assault vs a German hasty defense.  Here are the orders of battle: 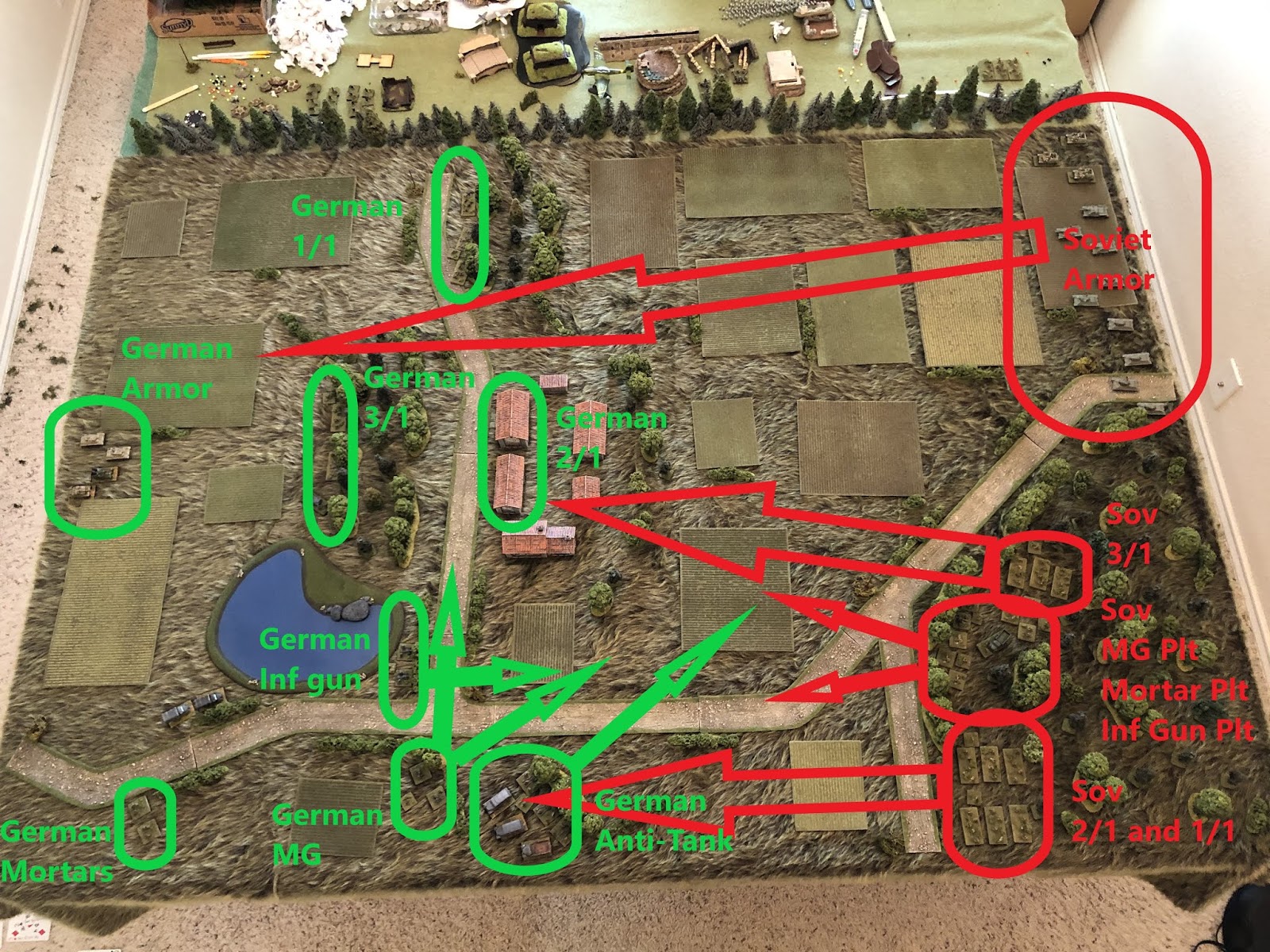 Let’s try this out, see how ya like it.  Here’s my scheme of maneuver overlay, showing the plan for both the Soviets and the Germans.  The Soviet plan is pretty simple, though they’re splitting forces a bit more than is probably normal.  The plan is for the Soviet armor to jailbreak through the gap between Snava and the North Wood, while 3rd Rifle Platoon takes Snava and the other two rifle platoons flank Snava to the south, both pincers supported by their heavy weapons stationed in Birnenwald.  The Germans have a bit of an interesting concept going on: first, they’re short on fuel and ammo.  Second, they’re facing a serious disparity in firepower.  Third, they’re facing a serious disparity in mobility.  So, they decide to emplace their direct-fire heavy hitters (the IGs, MGs, and ATGs) to interdict the Soviets most likely avenues of approach (the ATGs at bottom center to cover the entire arc between Snava and the Birnenwald, the MGs and IGs looking straight into the dark forest of the Birnenwald, where everyone is sure the Soviet infantry must emerge.  The German armor is in reserve, waiting to stem any Soviet breakthrough.  But the different piece is the three German rifle platoons: outnumbered and outmatched (very little organic anti-personnel capability beyond point-blank range, and no anti-tank capability beyond point-blank range), they are essentially conducing a ‘reverse-slope’ defense.

Yes, I know there is no slope, but what I mean is that they are looking to take advantage of restrictive terrain in order to maximize their capability against enemy armor and infantry by forcing engagements at point-blank range only.  They are doing this by occupying the North Wood, the West Wood, and the village of Snava, but by occupying only the west, i.e., trailing, edge of those terrain features.  So, by occupying the west edge, the Soviets will have to push into the east edge in order come to grips with the Germans, negating the Soviet firepower advantage.  Or at least that is the theory.  So spotting and ‘recon by fire’ will be a big part of this game because the Soviets are carrying out a hasty attack, so they didn’t have time to conduct a thorough reconnaissance and thus they have to identify where the German defenders are emplaced.

I am playing this game in 10mm on a 6′ x 4′ table.  The toys are a mix of Pendraken, Minifigs UK, and Takara.  The matt is from The Wargames Company, with trees, hedges, and buildings from Crescent Root, the pond from Battlefront, and the fields from Hotz Mats.  I am using the Too Fat Lardies’ “I Ain’t Been Shot Mum” rules, modified a bit for simplicity.  I already mentioned spotting and recon by fire being a big part of this game; IABSM usually uses ‘blinds’ to depict hidden forces, but I am not going to do this as I’m playing solo and don’t want to confuse myself any more than normal 😉  It’s actually quite simple, no confusion involved, I just don’t want to do it as I’m not going to be able to surprise myself anyway, so I’m putting the toys on the table and rolling to spot. 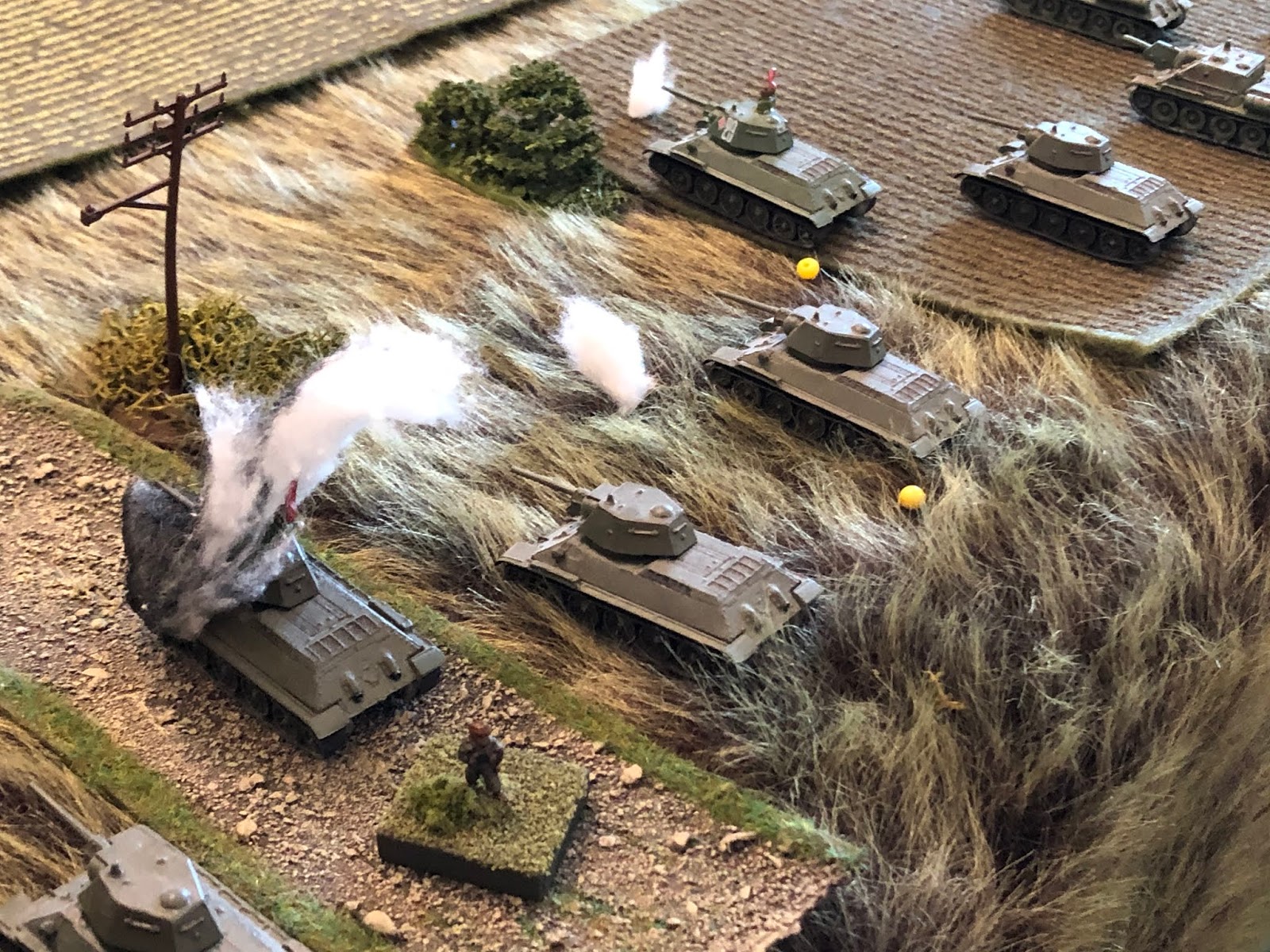 PaK Front!  Soviet tanks having a hard time getting off the start line! 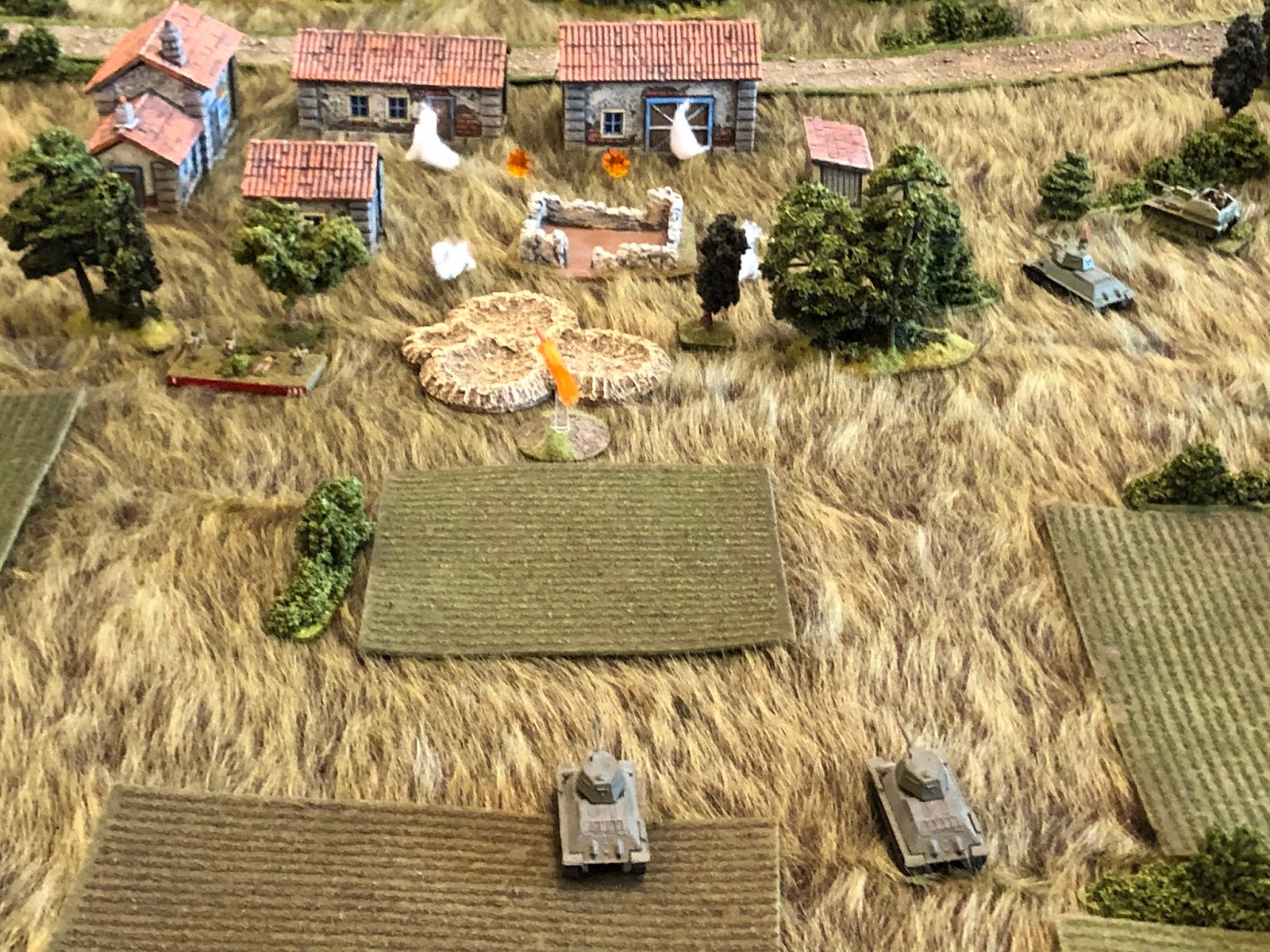 The Soviets have a toe-hold in Snava (far left) and their tanks are pounding it. 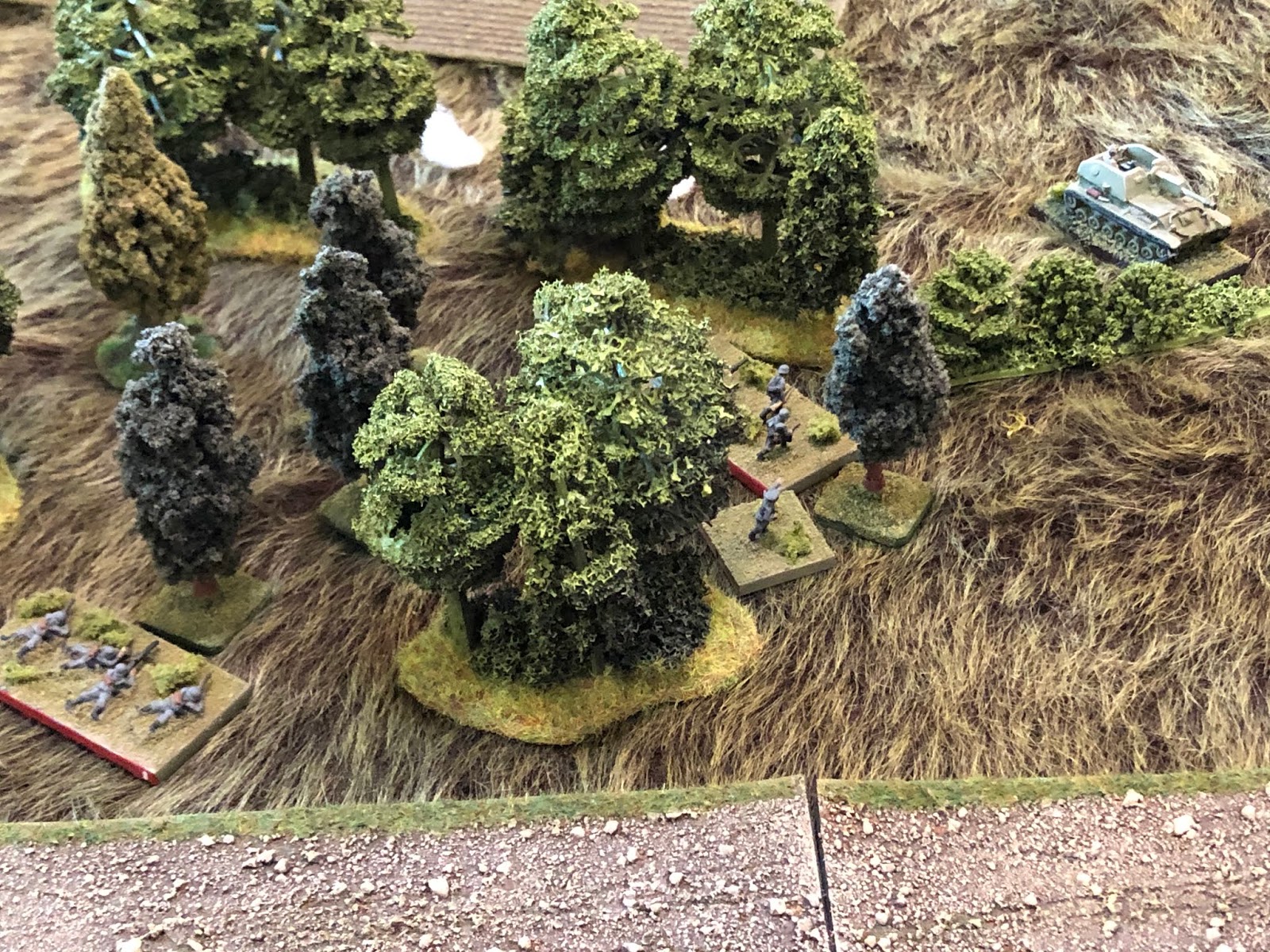 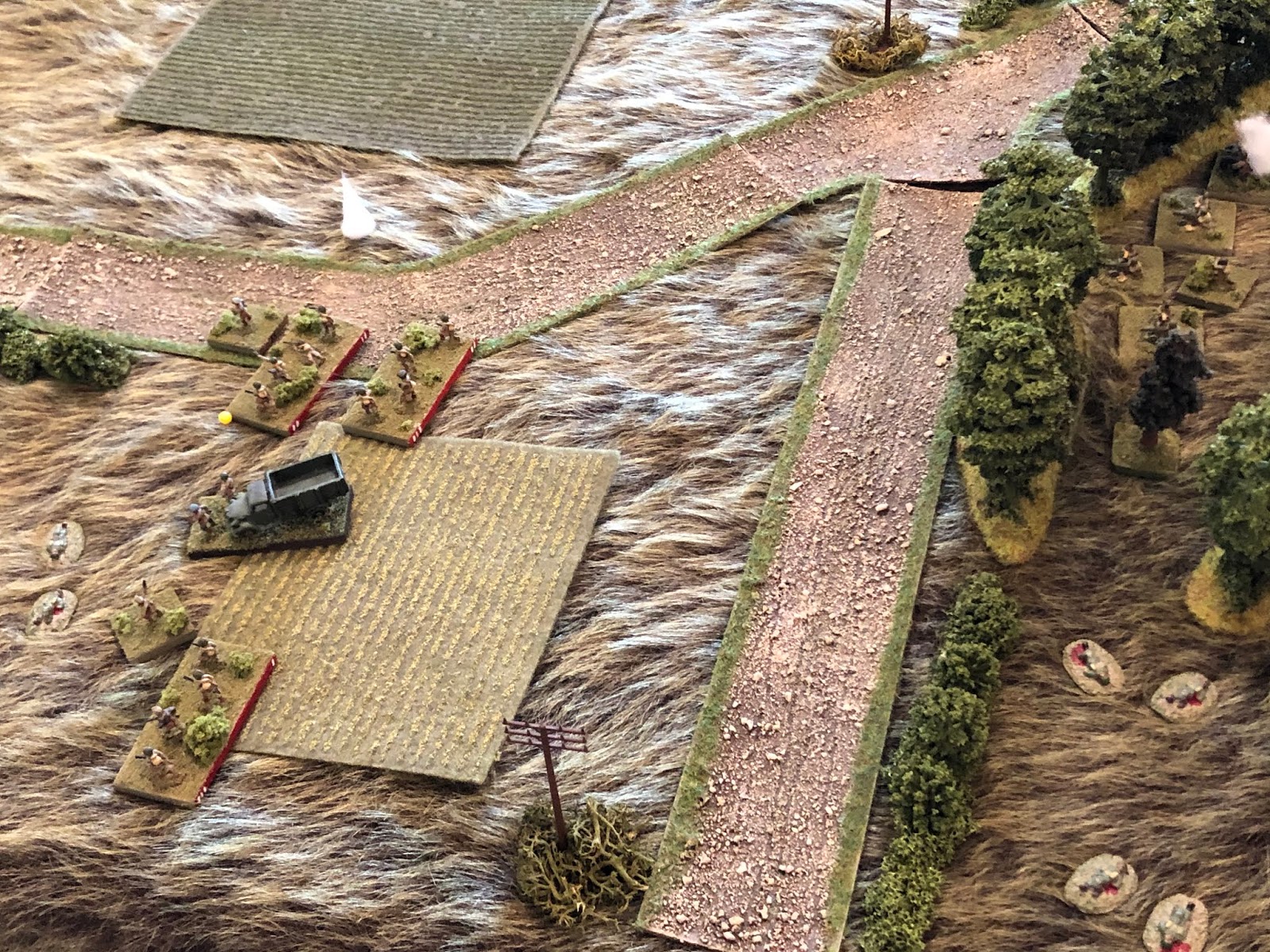 The Soviet CO tries to get his stalled infantry attack on the left flank moving again. 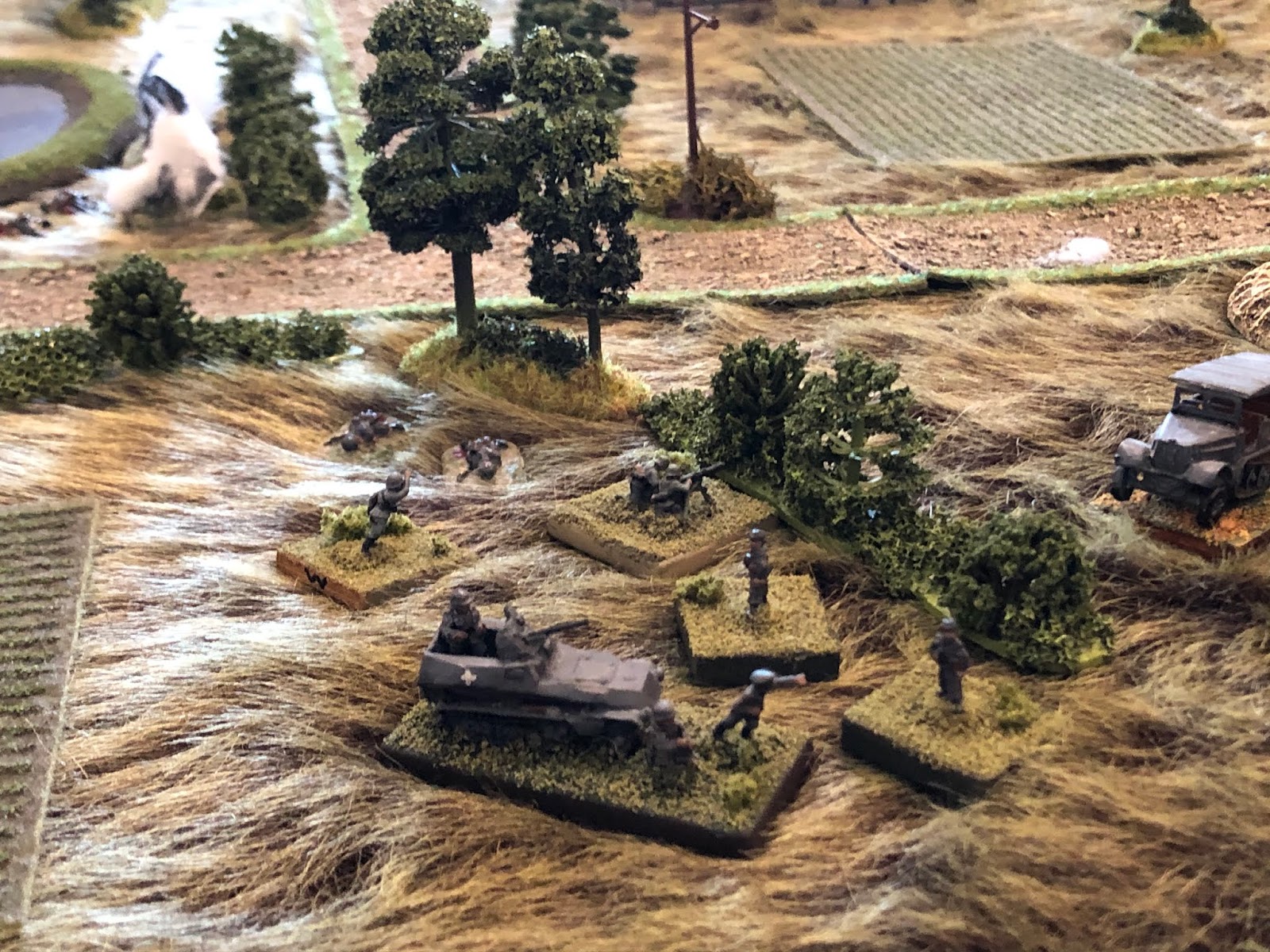 While the German CO is over there threatening to summarily execute his own troops!  “Not one step back!”

To see how the fight went, please check the blog at:
https://blackhawkhet.blogspot.com/2019/11/on-northern-shoulder-of-kursk-with.html

So, a helluva fight that was a helluva lot of fun!  I hope you enjoyed it as much as I did.