Had an excellent playtest the other day, I seem to have solved the heavy weapons issue – the solution was to always have heavy weapons supporting a squad – so their firepower is added in after the squad succeeds an attack roll, rather than treating them as separate units. The actual bases of heavy weapons just show that the squad is supported by those weapons, and don’t actually count for line of sight or movement.
Of course some heavy weapons will be able to be deployed separately – VC MG nests for example, and I will probably introduce rules for “splitting off” weapons teams to function on their own later, but for now this allows me to move forwards with the rest of the ruleset.
Part of the playtest in action – a US platoon searching a village comes under a heavy crossfire from 2 VC platoons in the treelines.

I used the Task Difficulty system from the post above, which seemed to work nicely, especially for detection. The detection rules in particular are shaping up nicely – when a detection roll is failed, a marker is placed on that unit and they remain undetected until they move or shoot – allows for ambushes to be as effective as they were in real life, and means if you’re moving about in the open, the enemy has more chances to detect you.

The suppression and disorder systems are working well, but the casualty system required some tweaking – the platoon was lasting too long without any bases being removed. The US platoon in the playtest took 25 casualties (8 or so KIA, a bunch of lightly wounded and 2 serious, one of which later died) and only removed a single M60 base. My solution was to make the “Scatter Test” (when a base is actually removed after taking casualties) ((I’m still trying to find a better name for this test)) scale in difficulty depending on how many casualties have been taken.
So a unit with few casualties will be able to function normally, but the effectiveness will be cut back as it takes more and more casualties.
This number will depend if the unit taking the test is a platoon or an isolated squad / team.
The Task Difficulty page now looks like this: 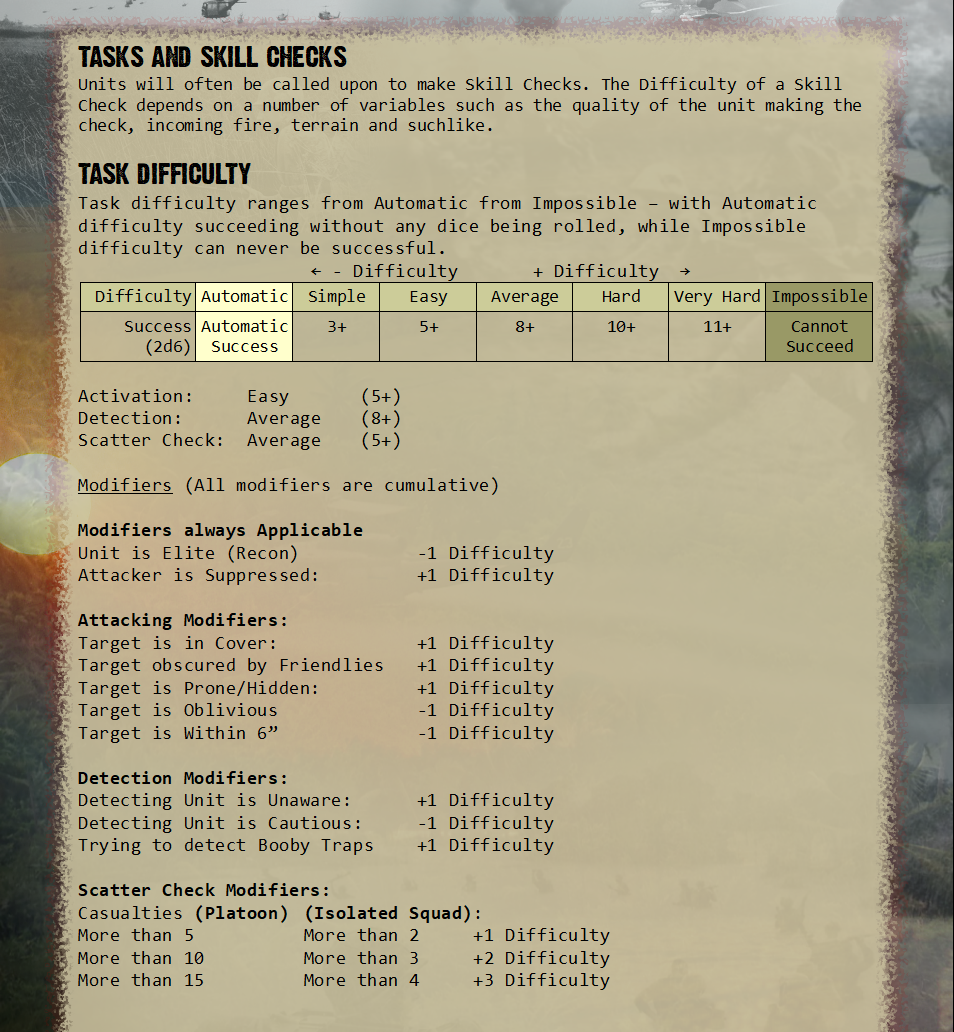 I also did a re-shuffle of the rule book, putting all the Terrain Point rules at the end, as I’m not using them in these early stages. This made things much more manageable, and I didn’t have to scroll past a bunch of rules I’m not using to read or work on what I need. Ergonomics is important in these early stages, to get a good grips on what rules you’re actually working with and how well they are working.

Another issue I tweaked was the damage table – HE did far too much damage, with 1 RPG killing multiple people and wounding others. I scaled it back based on the accounts I’ve read – from what I remember it was mostly 1 person killed max from an RPG, with a few lightly or seriously wounded in the worst case. Units would usually be spread out enough that a single RPG explosion wasn’t going to cause multiple fatalities as well as multiple others wounded. I tweaked the Heavy Ordnance table too in this manner.