This can be tricky as NVA doctrine and practice was to focus as much as possible on knocking out FWF MGs as well as RTOs, as most often it was the these 2 doing the real damage and suppression.

The players will still have the option to knock out MGs and other heavy weapons first, and I will likely have rules for separate heavy weapon teams eventually as well. As for targeting RTOs – could be an interesting idea, and I definitely read about this happening quite often (I recall a place called “Antenna Valley” where RTOs would always be sniped…)

Something else I think you might want to look at: how casualties are processed.

This was one of the core concepts I wanted to emulate in the game – Casualty recovery and its importance. Casualties are tracked as 3 types – KIA, Severely Wounded (bad enough that they can’t walk and could become KIA at the end of any turn), and Lightly Wounded (Walking Wounded)

Victory points will be largely based on unrecovered casualties – anyone left behind would give major victory points to the enemy. So the VC will always attempt to drag away their casualties, while the US must medevac them. Having Severe Casualties potentially degrading into KIA will put some time pressure on this too

This is the current casualty evacuation rules: 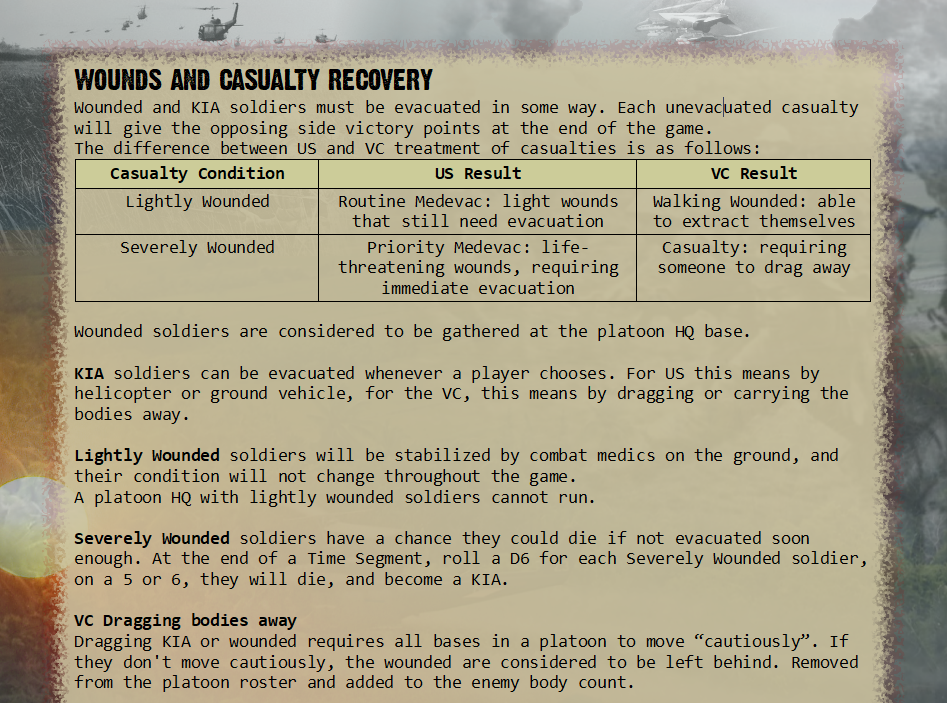 My plan is that the US will not gain victory points for VC KIA that are recovered by the VC (damn, I know we killed a few of them, but all we see is blood trails out there…) – needing actual bodies for the body count. While the VC will still get victory points for US KIA, even if they are recovered. This shows how many casualties the VC/NVA are able to sustain without losing morale about the war as a whole, while each US KIA degrades the support for the war at home.