@ Geof Downton, after I saw your post I hot footed to The Range and got myself a can.  I sprayed one figure from the 20 I have ready, the figure I picked was one of the first I’d used the Sharpies on and it also had blue, black and red on it, the 3 colours I’d used.  I stood  in the kitchen with the back door open pointing the can out the door and sprayed.  I did it like this because it was far to cold today to spray outdoors, I can’t spray indoors as I don’t have anywhere suitable and the garage, my location of choice was even colder than out side.  The blue and the black were fine but the red ran, this didn’t surprise me as I’d had a problem with it running previously.  As you can see below, the red is a chequer board pattern, I did this by drawing the pattern in pencil and colouring in the red squares, then I used a sheet of moist kitchen roll with a little washing up liquid to remove the pencil marks, this had worked fine with the blue and black but it smudged the red.  I had tried to clean up the smudges with paint but the red just bled through the white paint.

After the varnish dried I worked the figure up and everything was fine, I touched up the white with paint, applied Army Painter washes and did a little bit of highlighting.  The AP washes had removed almost all of the Sharpie swirlies before I’d varnished the figures.

@patrice I have suspected for some time that temperature and humidity are contributing factors to varnish frosting and I was told to do the hairdryer trick by a guy in the local GW when I bought the last can of spray varnish, the first time I did it worked fine but the second time it frosted.

@irishserb As I have said above I’ve only used blue, black and red up to now on the 20 figures I’ve started.  I’ve got 200-300 of the little buggers to paint and I intend to do a colour test on the rest of the Sharpie colours.  I will probably use more paint on the next batch.

Here’s a picture of the finished figure, I don’t expect to win any prizes for the paintwork, this is a table top quality job and the Sharpies were supposed to speed things up

.  Overall I’m still happy with the results and I fully intend to carry on using the sharpies, just maybe not so much red. 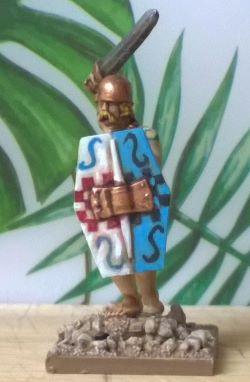