It’s dawn on 10 July 1943 in western Russia, where the German II Battalion, 507th Infantry Regiment of the 292nd Infanterie Division, with support from II Battalion, 18th Panzer Regiment, 18th Panzer Division, is on the attack, looking to evict the Soviet 1019th Rifle Regiment, which has been whittled down to less than company strength!  Shirokoye Bulotev itself is a bit shell-shocked, having changed hands several times, this is the sixth battle for this very ground in less than a week.  It’s tough to gauge who has the advantage in this fight; the Germans are veteran troops, and though they’re understrength, they still have plenty of heavy weapons, and are buttressed by a platoon of Panzer Mk IIIs.  Additionally, they’re commander has commandeered three armored halftracks to give his infantry some added mobility.  The Soviets are worn down conscripts, vastly understrength, but they’ve got quite a few heavy weapons themselves, and they recently took in three T-34 refugees from the fight in Kastenwald, plus the Germans have a lot of open ground to cover in order to take the ultimate objective, the Collective Farm. 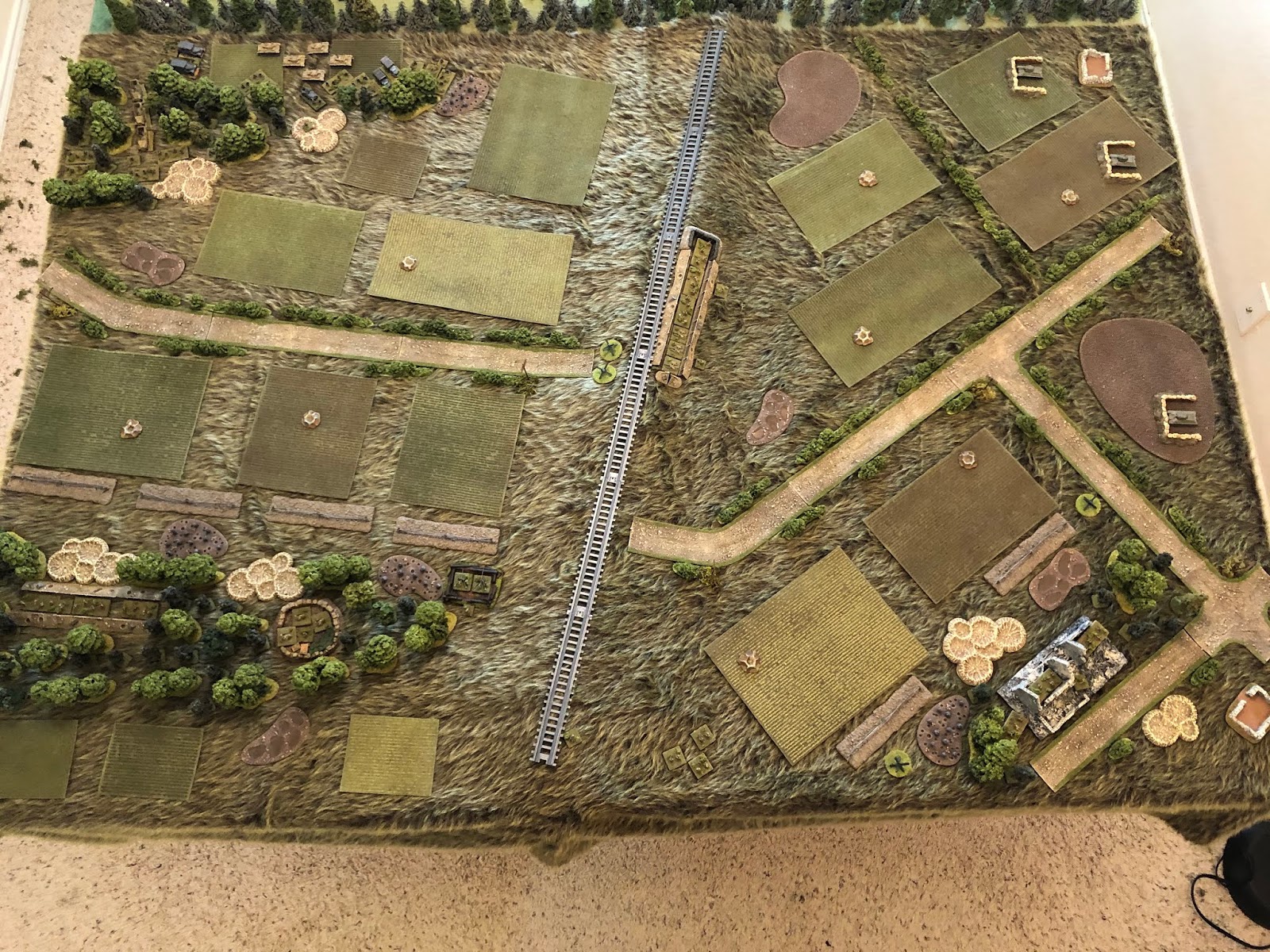 Overview, north is up.  Running north-south in the center of the table is a significant piece of terrain in this fight, a railway on a raised embankment, which is high enough to mask the movement of tanks.  The overall objective for each side is the Collective Farm, which is at bottom right.  There are patches of woods in the northwest (top left) and southwest (bottom left), which will feature prominently in the upcoming fight.  There are a couple dirt roads running up to the railway embankment, the eastern of which also branches in/around the Collective Farm, though they’re pretty much here for decoration as pretty much the entire map consists of crop fields, i.e., drivable terrain.  I’ve done what I can with craters and ‘rough ground’ patches I’m using to try and show burnt fields in order to reflect the fact this patch of ground has seen more than its fair share of fighting.

The orders of battle for this fight:

The railway embankment terrain feature essentially turns the fight for Shirokoye Bulotev into two separate fights.  I actually deliberated long and hard on how best to reflect this, based what the Soviet defense would/should look like.  The Germans are attacking from the northwest, so the patch of trees at top left will serve as both their base of fire for support elements, and their line of departure for assault elements.  My initial inclination was to put the railway embankment at the far left edge of the table, and let that be the German start line, with the Germans having to skyline themselves, then cross an entire table consisting of crop fields, devoid of cover, with the Soviets dug-in at far right, even not occupying the Collective Farm (which would have been in about the same location as it is now, maybe a little further left), but prepared to counterattack it with their tank platoon, maybe even carrying a platoon of tank riders, should the German assault make it that far.

However, the Gamemaster informed me there needed to be a definite differentiation between the Veteran German force and the Conscript Soviet force.  So, that made me consider not only how the German and Soviet forces would perform on the tabletop (in the event, the Germans had some real problems keeping their troops moving and getting their ample support weapons to perform effectively, despite this, and I probably let the Soviets get away with some actions that were probably a bit too crafty for beat-up conscripts), but also how they would deploy on the tabletop.  So I decided that the ‘skyline the Germans with the railway embankment’ defense was too tactically advantageous for the beat-up Soviet conscripts, so I put them on this table and started them with the classic rookie mistake (and one I regularly make in wargames, anyway, just look what the Germans do!) of splitting their forces, no unity of effort, no concentration.

All the Germans are in the northwest (top left), either set up and ready to support, or sitting tight, ready to advance.  The Soviets are scattered across the table, trying to defend everything: the Soviet 1st Platoon is at bottom left, in the woods, with their Machine Gun Platoon and Anti-Tank Gun Platoon.  The Soviet 2nd Platoon is dug in on the embankment (center) with their Anti-Tank Rifle Platoon.  The Soviet 3rd Platoon is dug-in to the ruins of the Collective Farm (bottom right), and the Soviet Tank Platoon is dug-in at right/top right.  That’s right, another aspect of the ‘conscript’ classification is that the Soviets are not keeping their tanks for a mobile reserve, but are using them in static defensive positions.  In their defense, the hull-down emplacements will make them very hard to detect and hit, and the German armor and infantry will have to skyline itself coming over the railway embankment, but the problems are that 1) once over, the Germans will be practically on top of them, and 2) the T-34s will not be a factor in the fighting west of the railway embankment.

So, the German plan, in order to make things easy for the Russkies, the Germans will split their efforts.  The German 1st Rifle Company will clear the woods in the southwest (bottom left), then wheel left and push east for the objective, the Collective Farm.  1st Company has three rifle platoons: 1st Platoon is in the assault, 2nd Platoon is supporting from the wood, and 3rd Platoon is the reserve, loaded up in the halftracks.  In the halftracks, yes, but not as battalion reserve, they are 1st Company’s reserve; the German battalion commander knows he should probably just bypass the southwestern woods and sweep around to the north in order to reach the objective, but he is very much concerned with not leaving a Soviet force of unknown size and composition in his rear.  Therefore, he has 1st Company’s 3rd Platoon loaded up in the halftracks, ready to dive into the woods, and they’ll be moving out on a hair trigger, he really wants those southwest woods as soon as possible.  He then intends for the halftracks to double back to the woods to pick up the 1st Company’s 2nd Platoon and rush them forward.

The German heavy weapons (MG Plt, Mortar Plt, and IG Plt) are all set in in the northwest woods (with 1st Company’s 2nd  Plt), looking to shoot in 1st Platoon’s attack into the southwest woods.  Once the southwest woods are secure, the MG and IG platoons will load up in the trucks and push up to the railway embankment to support the assault on the Collective Farm.

The Germans don’t have a reserve force to speak of; owing to 1) a necessity to press this attack home as quickly as possible, and 2) being severely understrength, all forces are committed either to the attack on the southwest woods or the railway embankment envelopment.  Everybody but the German ATG Platoon, which is starting the game limbered up and will be waiting to see if and when any Soviet armor appears (the Germans are not aware of any Soviet armor in the area). 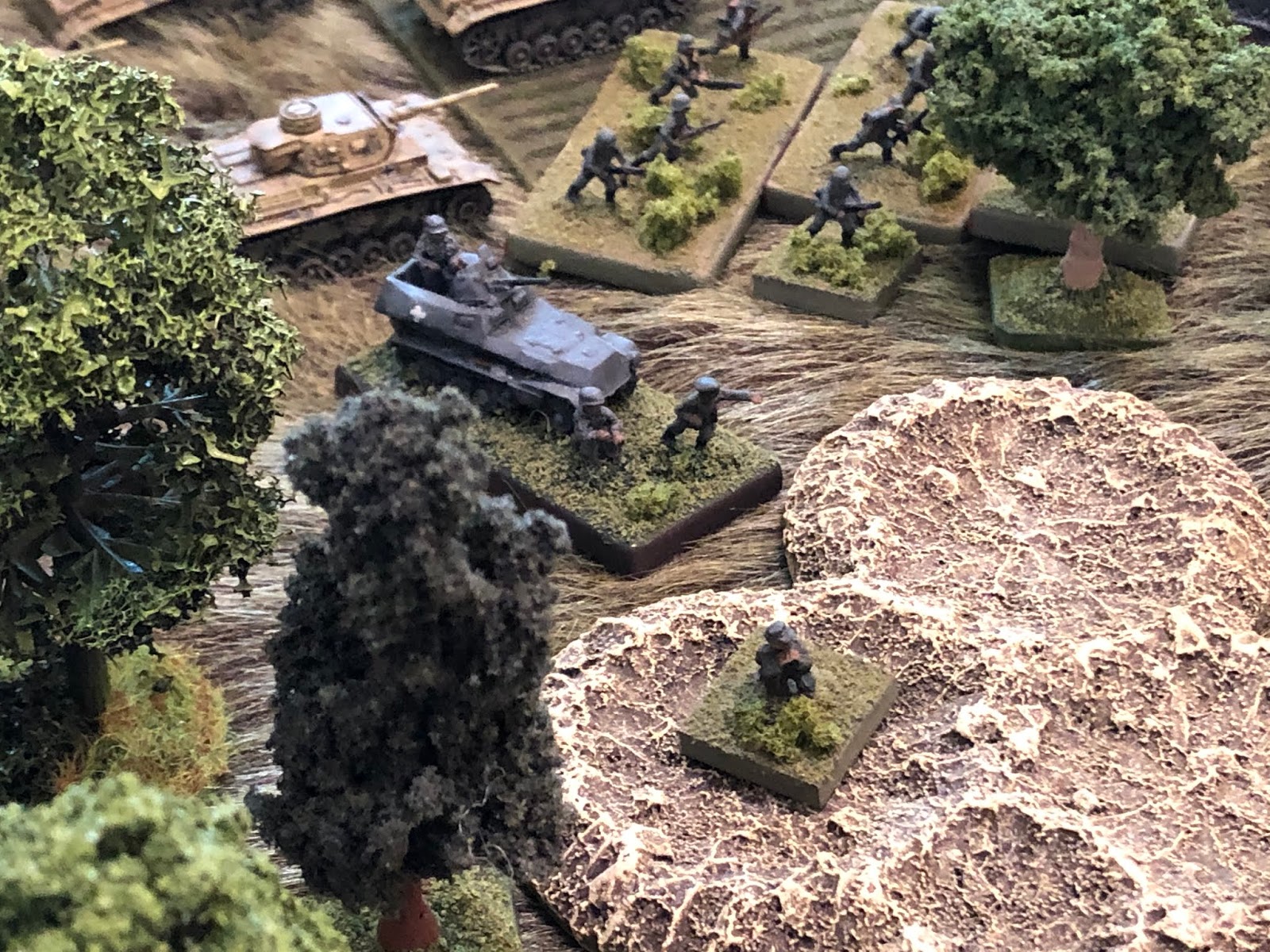 The German commander fires a green flare from his Very Pistol, signaling the start of the attack, with his Mortar Platoon commander in front of him in the craters, tanks and riflemen of 2nd Company behind him. 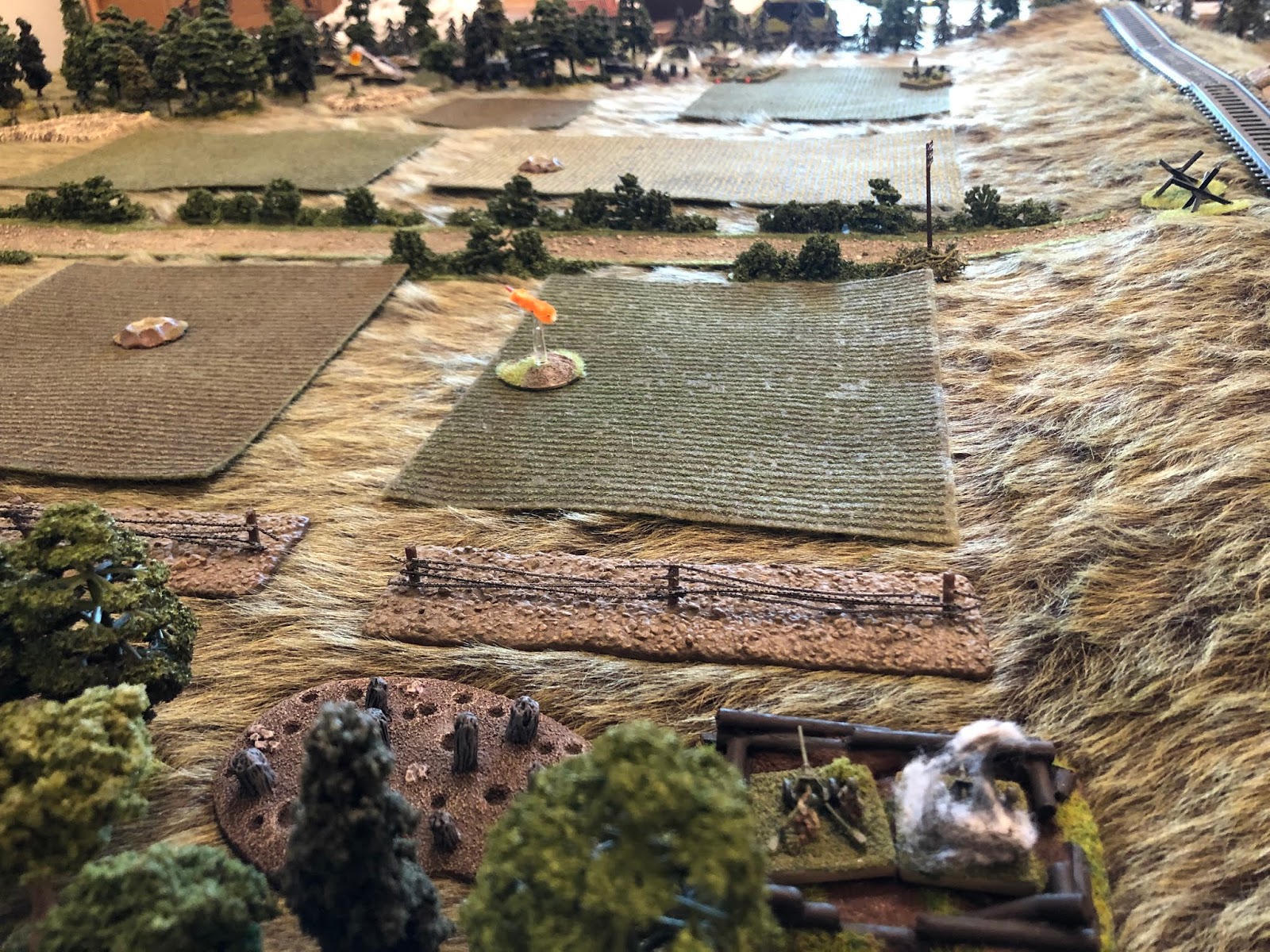 Soviet ATGs in the southwest woods (bottom right) spot German armor through a gap in the northwest woods (top center left) and engage. 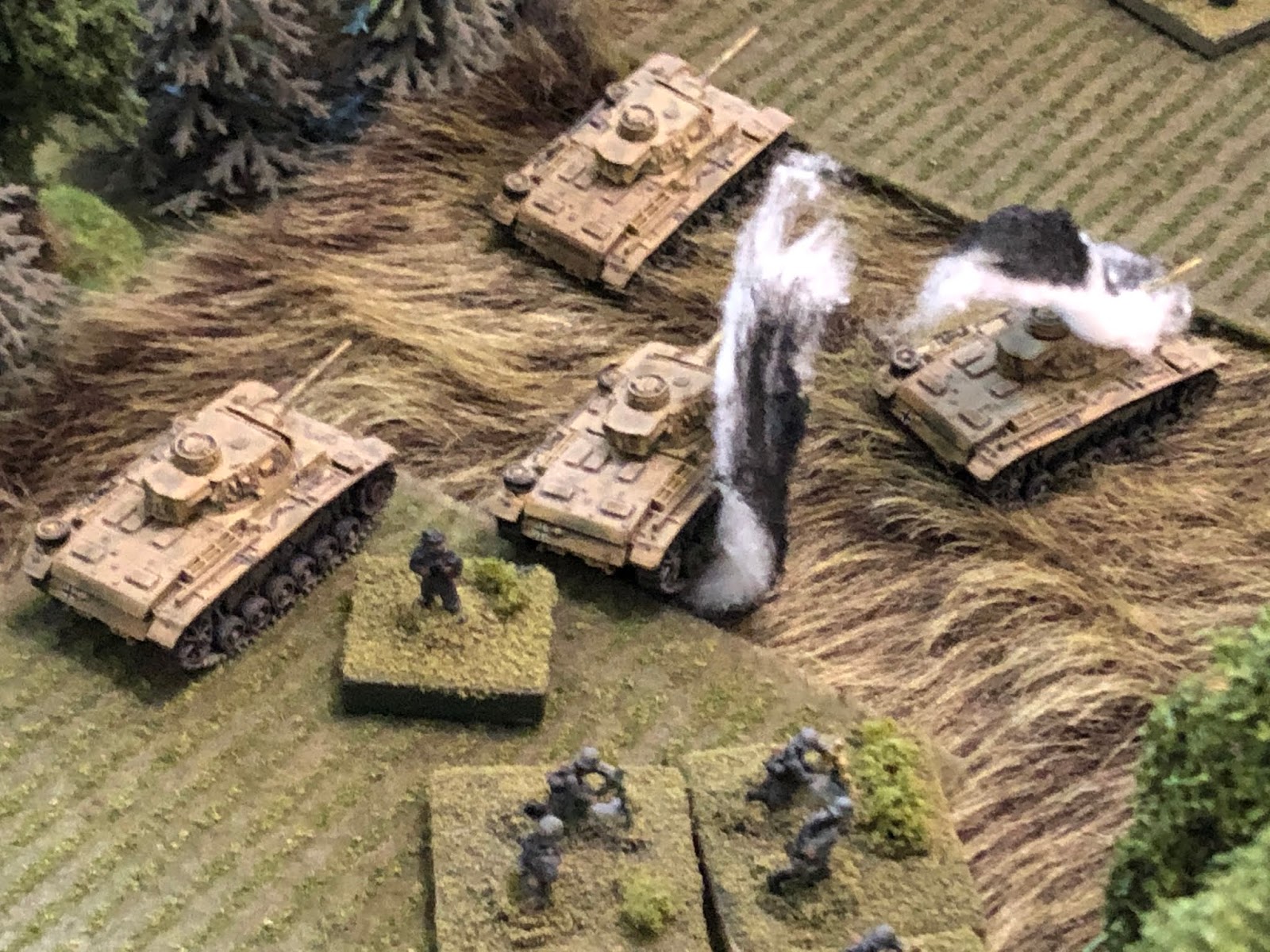 Busting open a pair of panzers! 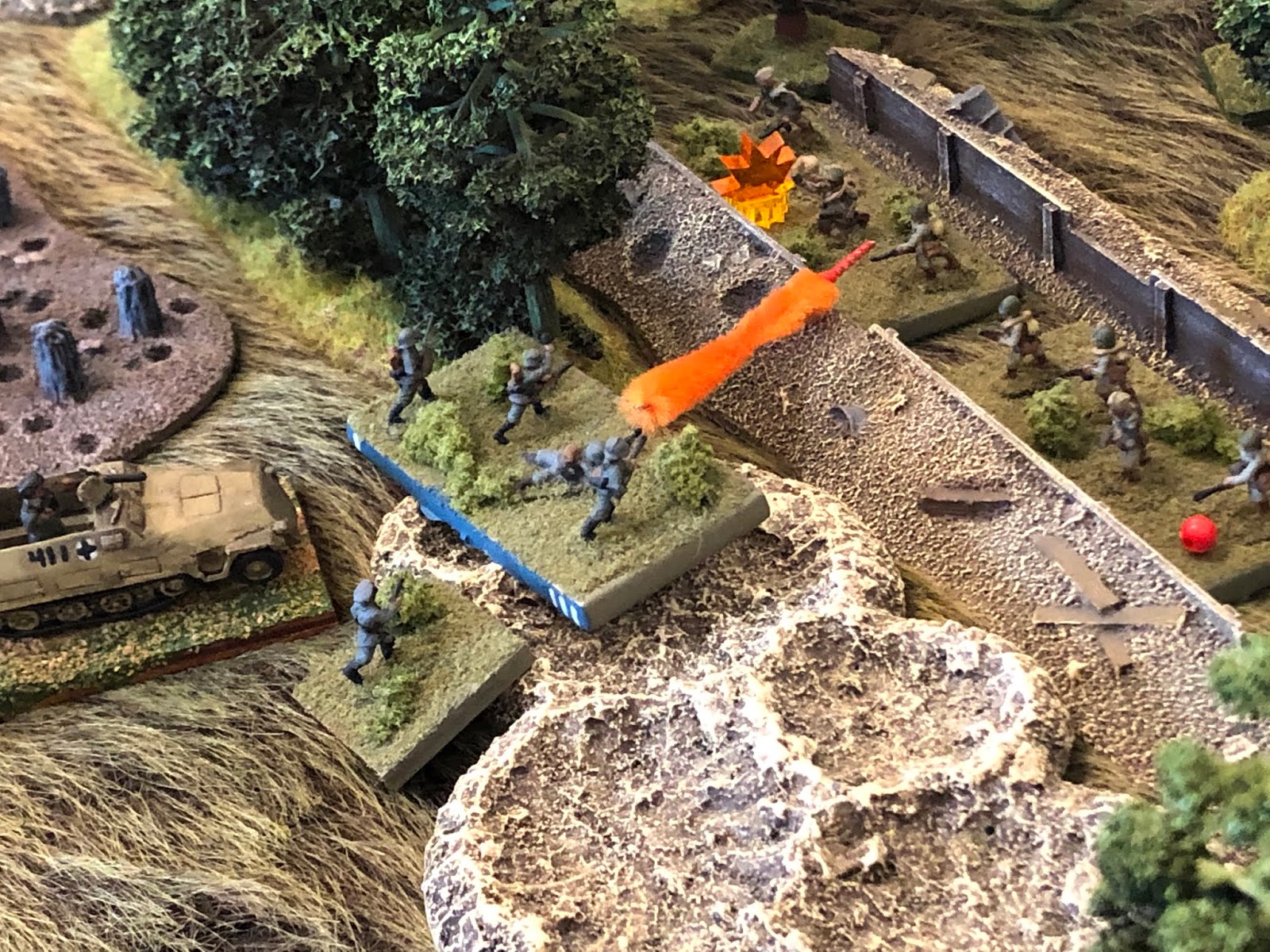 German infantry assault the Soviet trenchline in the southwest woods. 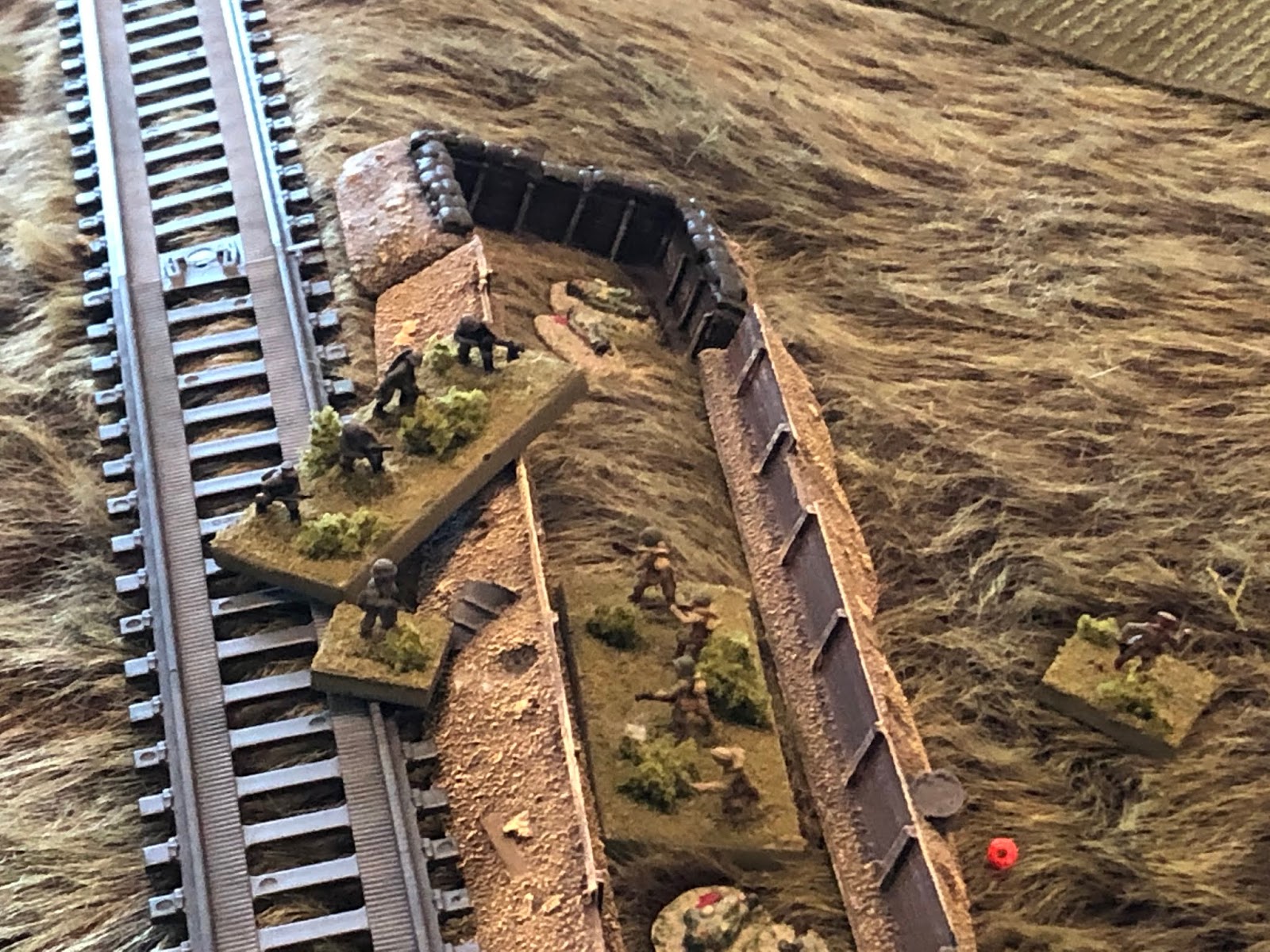 And the Soviet trenchline at the railway embankment. 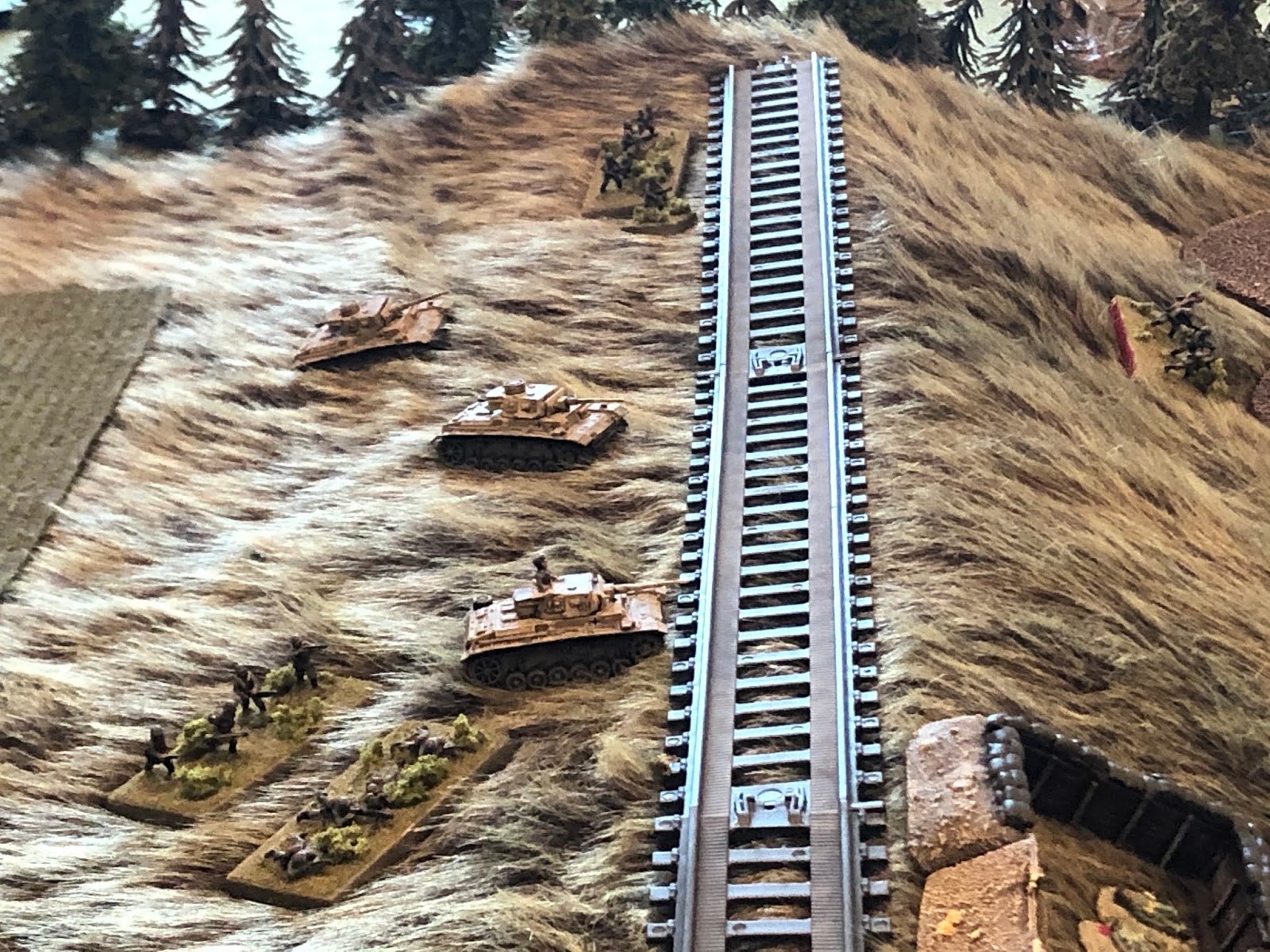 This allows German infantry to move down the east slope of the embankment and the panzers to move up into hull-down positions atop it, where they engage the dug-in Soviet T-34s. 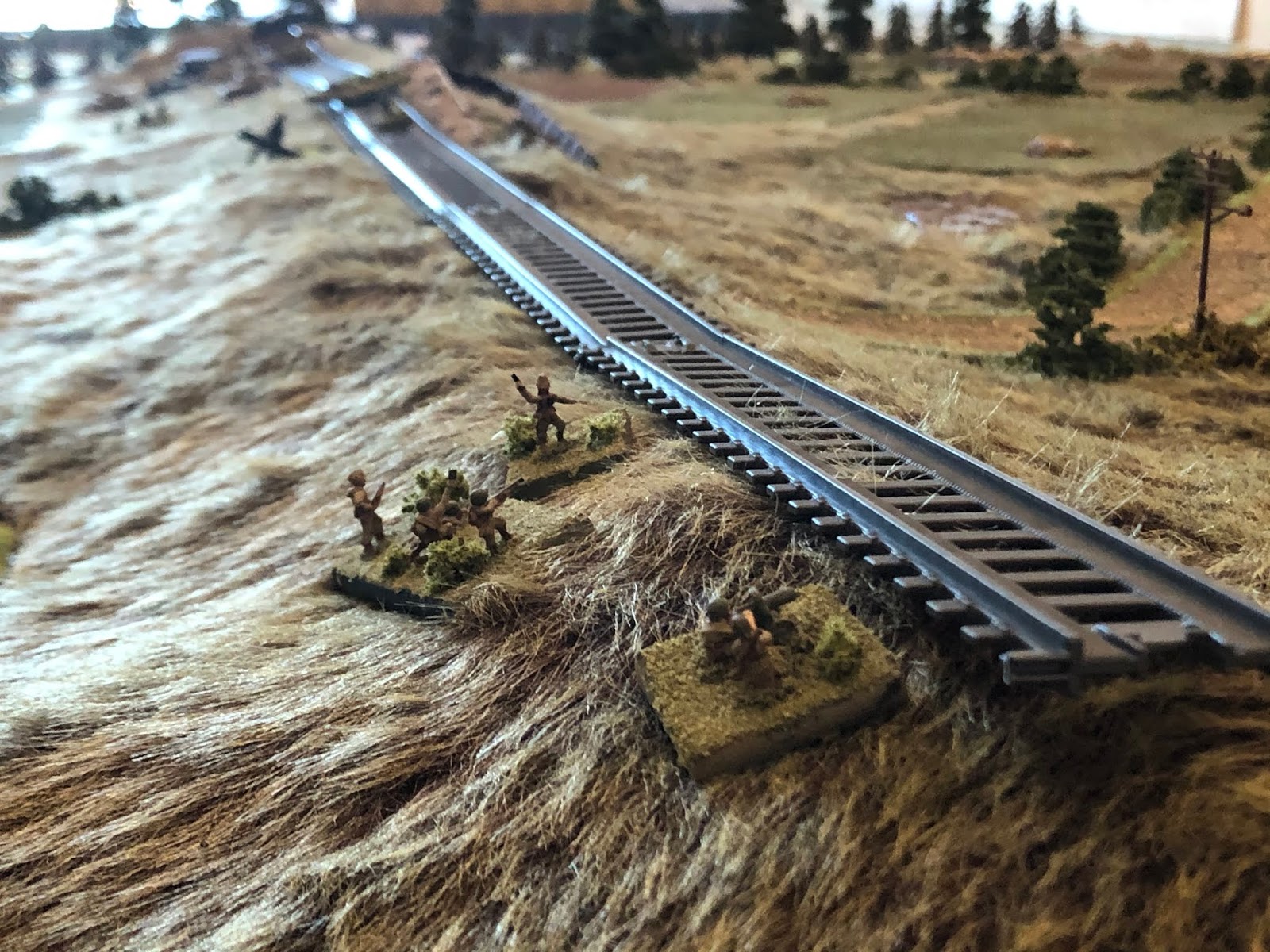 Fighting rages further north (top) as Soviet troops from the southwest woods fall back, over the railway embankment. 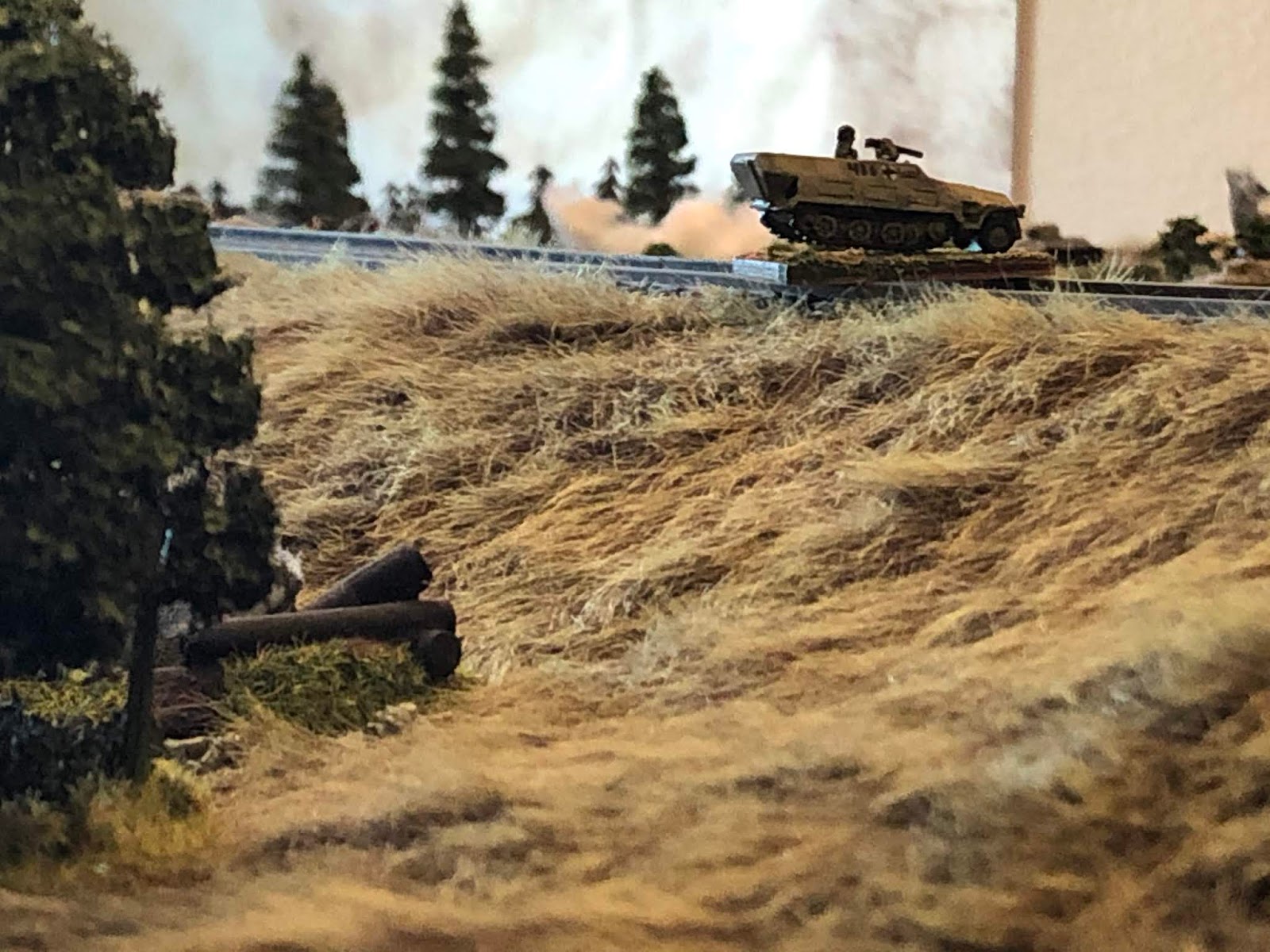 The lead German halftrack is sky-lined as it crests the railway embankment. 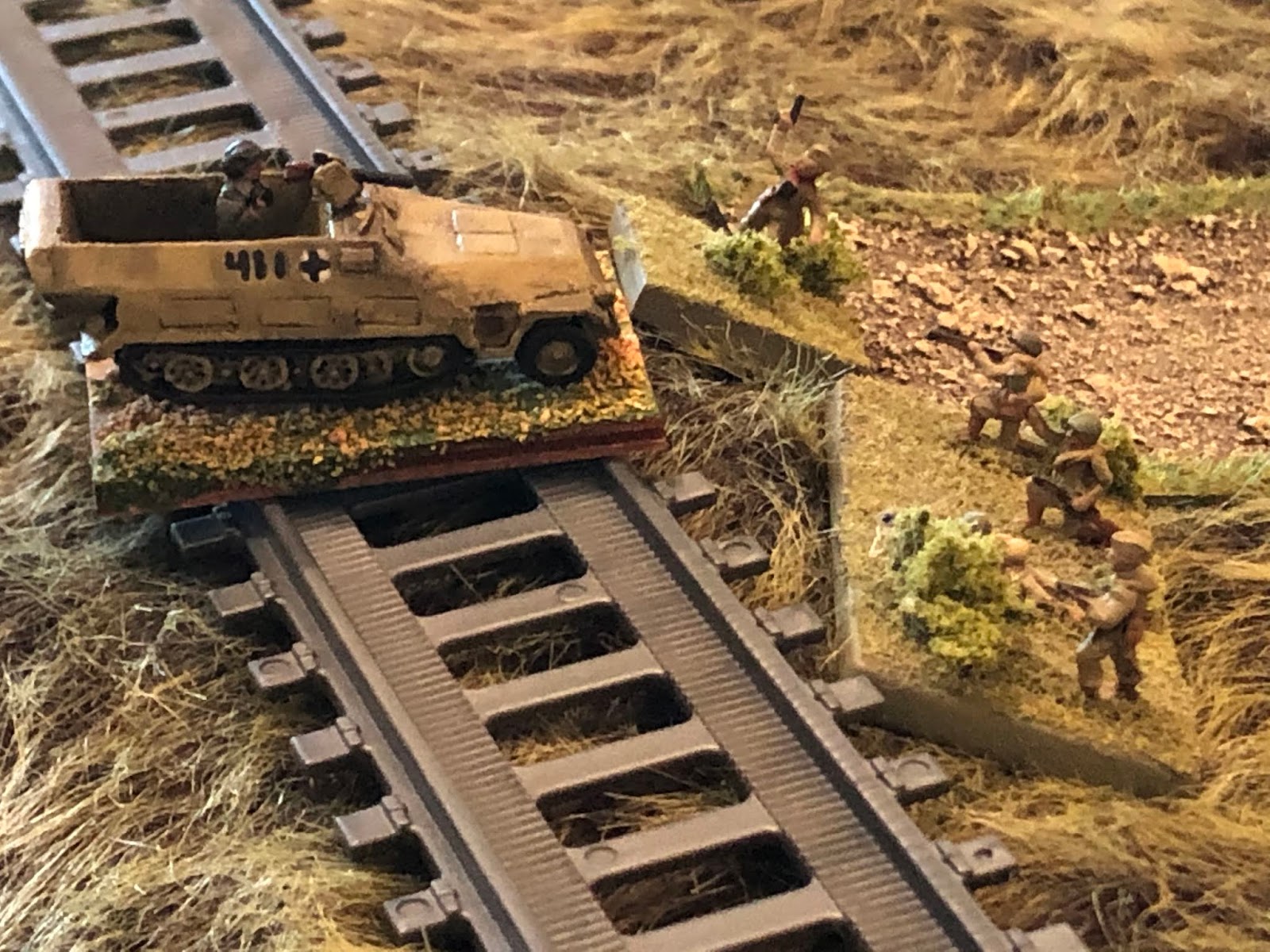 Where it runs right into those Soviet refugees from the southwest woods!

To see how the fight turned out, please check the blog at:
https://blackhawkhet.blogspot.com/2019/12/on-northern-shoulder-of-kursk-with.html

In any case, here’s looking forward to my next East Front game, which will probably be the last one for awhile.  I hope you’ve enjoyed these, and let me know what you think of my ramblings on tactics and tactical decision making.