Hi Tony, as I still await permission to join the DBMM forum (and others have waited far longer, I have been informed) I posted the question on the Yahoo group. There a midsized discussion came to a more or less mutual conclusion that the Ax can attack none of the enemy’s elements. I tried to read the rules more carefully but whenever I found a faint hint suggesting some other possibility for the Ax (to attack anyone) some other rule or diagramm ruled out that idea.

Regarding DBA 3: On page 23 figure 13d. shows a situation (if I interpret correctly) of close combat without conforming in any way. The attacker moves a 3-element group into front edge to front corner contact with 2 2-element groups (simultaniously) and cannot conform to either of them. The text says: The defending groups must conform to the attacker, or fight as if each is overlapped on one flank.  In my example above the Ax could move into front corner to flank edge contact with the defending element, something that in real life would be even more desirable to an attacker than the example of figure 13d in DBA 3 (at least I guess so). So why doesn’t the Sp have to conform to the Ax hitting them in the flank? I mean, in principle?

And to make the situation a little more historic, if looking at the situation above, would the rules lead to a different outcome if we swap the Ax for an element of Kn (that we might call Alexander the Great) and give a name to the Cv as well, maybe Darius. And we exchange the group of two spears to an element of Hd. I guess Alexander has no choice but to retreat….. 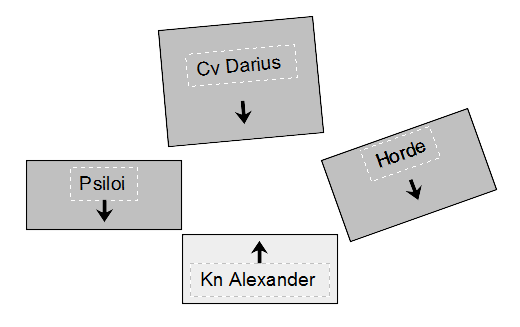 For me a more plausible option would be the Kn moving directly (because of a Threat from the Cv) forward contacting the Hd in the flank and  moving/conforming into front edge to side edge contact with the Hd element, and the Hd sliding into front corner to front corner contact or fighting as if overlapped (or something like that). This will of course open up the flank of the Kn to attack from the enemy Cv and its rear to attack from the Ps, but only next bound.

I know this will not happen 😉

Best regards to everyone reading this far!

P.S.: DBMM has a rule to move obstructing elements aside, IF legal edge to edge contact with any element has been made in the first place and only to make room for conforming. I can understand that restriction as otherwise any attacking element could simply move aside / break through any line of elements to attack those wating in reserve.