Some Cultists I finally painted up. I bought them a long time ago, back when Dracula’s America was just released, as part of another abandoned project.

They’re going to replace the gnolls in my RoSD  game as I like the idea of a single all encompassing evil over that of a seemingly random gathering of different kinds of fantasy creatures.

For the ones who are wondering why I used two types of bases; the Khurasan models are slightly smaller than the ones from RPE and to mitigate the height difference I put the Khurasan ones on higher bases.

My Magister/Necromancer and his mummified pet rat 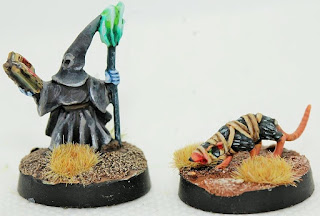 Initiated members of the death cult, in RoSD they’re going to represent the gnoll sergeants

Death cultists with hand weapons, I gave them hoods to tie them in with the rest of the force.

Crossbow wielding cultists that I converted from the ones with rifles. 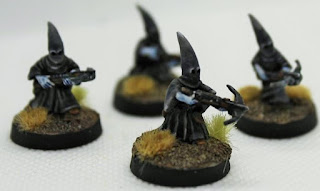