This was supposed to start off as an air game with aircraft trying to blunt the advance before turning into a ground game. It looks like new flight bases I ordered might be lost in the mail so ground game it is. 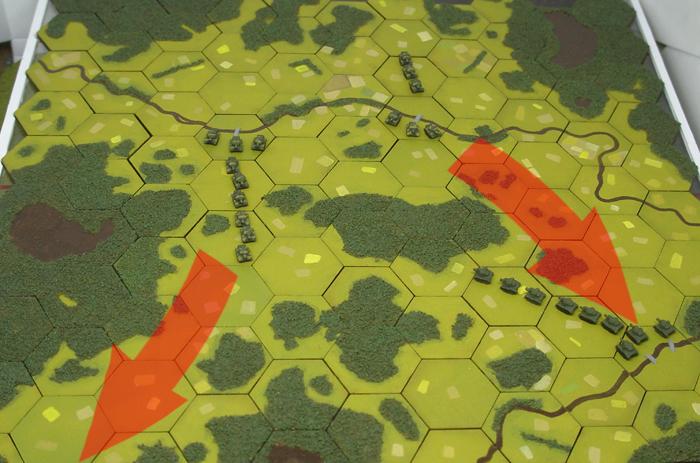 Northen axis objectives are the bridges in the SE and the SW pass. Their axis of advance is limited by the natural chokepoints.

Southern objective is to push Norhtern forces back across the river and hold the two bridges. 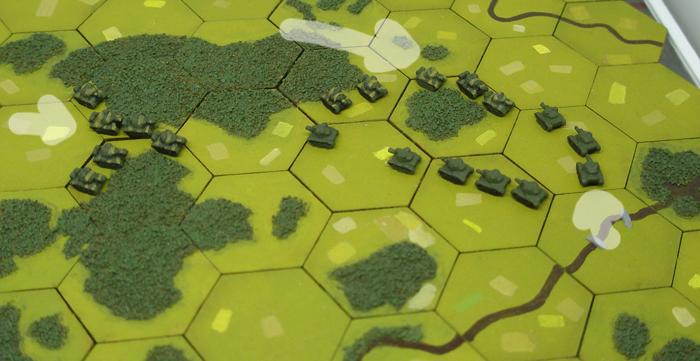 The first few turns were entire the Northern force advancing down to campture teh SW objective. Southern force got bogged down for a full 3 turns. The tatal failure in command and control meant the armored column got ambushed by 2 Northern platoons. Somehow, despite being in the open and caught un prepared they managed to hold on and inflict damage on the Northerners, halting their Northern advance. The Notherner attack did pin Southern forces even more, buying time for Northerners to build up forces to the W up for a push East, that could bring the whole defense down.

The Northern forces waited too late and lost their initiative, Southern couner attack totally destroyed an entire armored platoon. Local superiority won the day on the right flank, but the left flank is in for a hard fight the next turns. 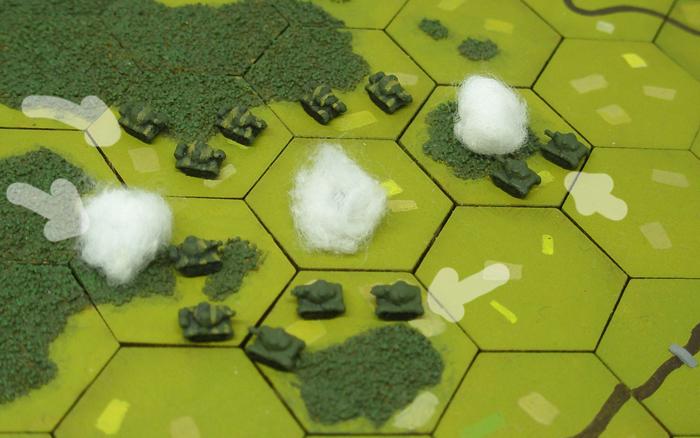 Southern forces redeployed their center to the south, redrawing the defensive line. The now center of the Souther defense took the brunt of the attack and after a long fight was eventually destroyed by the fresh Northern units.  All along the line tanks took shots at each other but both flanks were too well fortified. 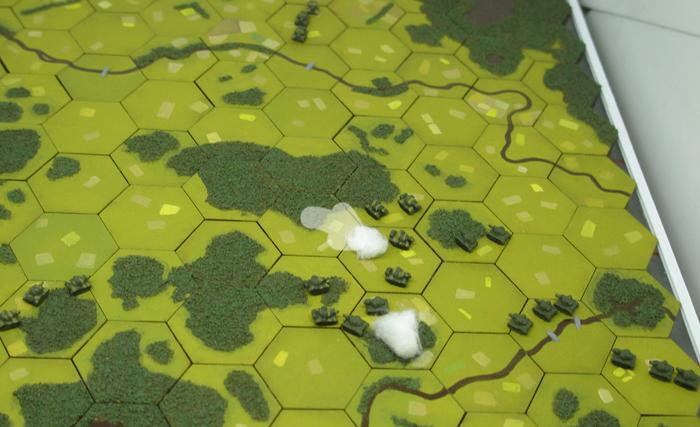 Nothern tank platoon roll through the breakthrough in the center and into open country. 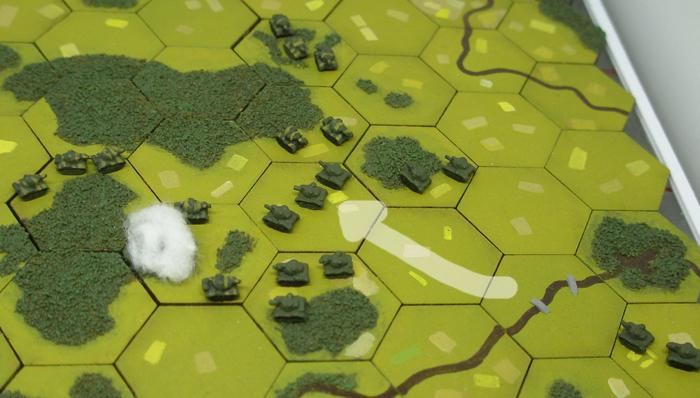 Luckily Southern reinfocements arrived to push the Northerners back and plug the hole. Norhern tank platoon redeploy east from their recently captured objective in SW. It looked like they could turn the tide if they could advance fast enough before Northern forces seal the gap. Elsewhere Northern forces sent its own reinforcements to break the north flank. 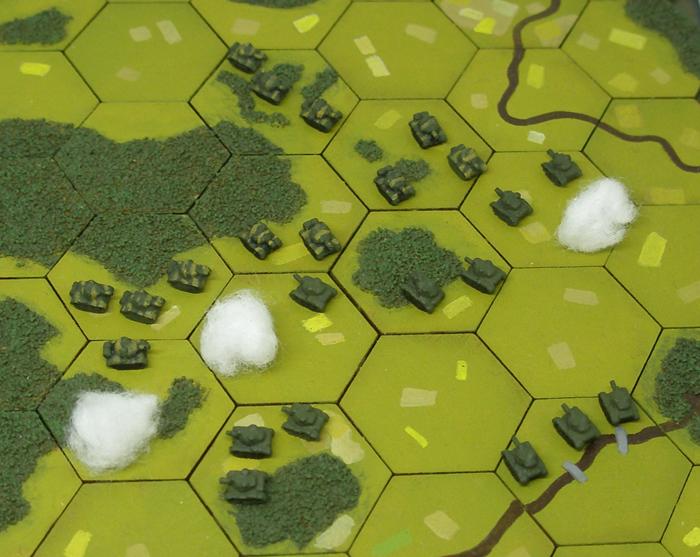 As more reinforcement arrives for both sides a fierce battle developed in the north. Southern force took heavy casualties being caught in coordinated attack to the north and center. In both places Southern tanks were in the open and vulnerable. Southern reinforcements trickle in only fast enough to replenish depleted platoons. 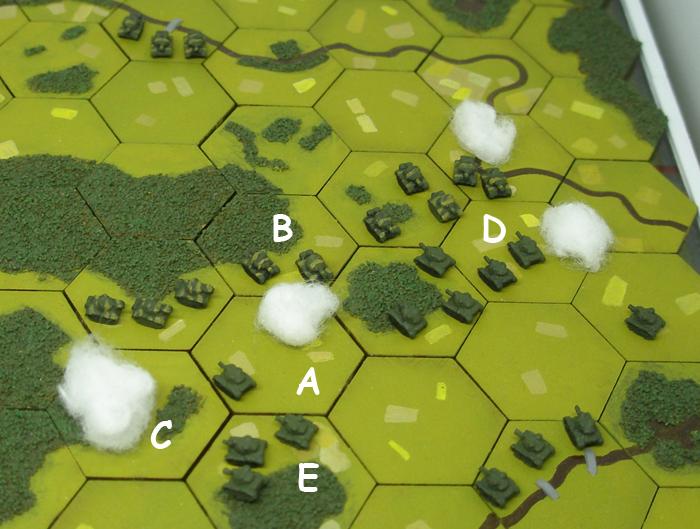 The Southern platoon on the norhtern flank pulls back to let a fresh platoon takes its place (D) only to get mauled by the Northerners with their own reinforcements. Despite reinforcing platoons all along the line, Southern forces were loosing the center again (A). In the southern flank Southern forces (E) manage to at last break the Northerners (C), opening the line up for a flanking attack. The newly arrived platoon looks like it’ll have to be putto use in teh center (A) instead of pushing the norther (D) back but the diminished platoon that just pulled back could be put back in to bring platoon at (D) to full strength.

Although Northern forces holds a much stronger position it looks like its in trouble as reinforcements were sent to the north (D) while the center and southern flank got wittled away. Northern center (B) is stil holding strong in a well fortified position.

(B) and it’s adjacent hex had been very stable so far with very little casualties. (A) on the other hand is a killing field, Southern forces lost maybe 3 full platoons there and now (D) looks like it’s going to be the same. Nothern forces will probably break through from the north (D) and could potentially win the battle in 2 turns if they capture the bridges. IF, Southern reinfocements can’t plug the hole in time. If Southern forces could survive long enough they might exploit the southern flank, send a platoon to recapture SW and up north to capture the west bridge. Northern reserves is too far from the southern flank (C) to hook around from the W will likely cost that front so the plan could be to shift platoons to (C) and use the fresh platoon to reoccupy (B).

The map is over a 100 hexes and the game gets bogged down in less than 10 hexes.