Darby – Yeah, in the overall scheme of things, 5 1/2 hours is way too long for me to be playing a game, that should easily get me three or four games.  Regarding mortars, man, I’ve got some stories.  The problem with mortars is that they really play a head game with you.  You can usually hear them go out, and they just hang up there forever, and with that first volley, you don’t know where they’re headed…

John – Yeah, like I said, there were two issues: 1) the Germans just really had some excellent shooting dice when it came to firing at those guns (once they opened fire and were finally spotted); and 2) I didn’t have enough sandbagged emplacements to split the guns.  So I should have had four emplacements, each containing one gun, which would have allowed them to be dispersed, but I only had two, when there was good shooting, it was affecting two guns rather than one.

Thomaston – Negative, I’ve had those building for about a year.  I’m glad you enjoyed the scenics, I’ve been working for a number of years now to get them better.  Yes, drink it all in: 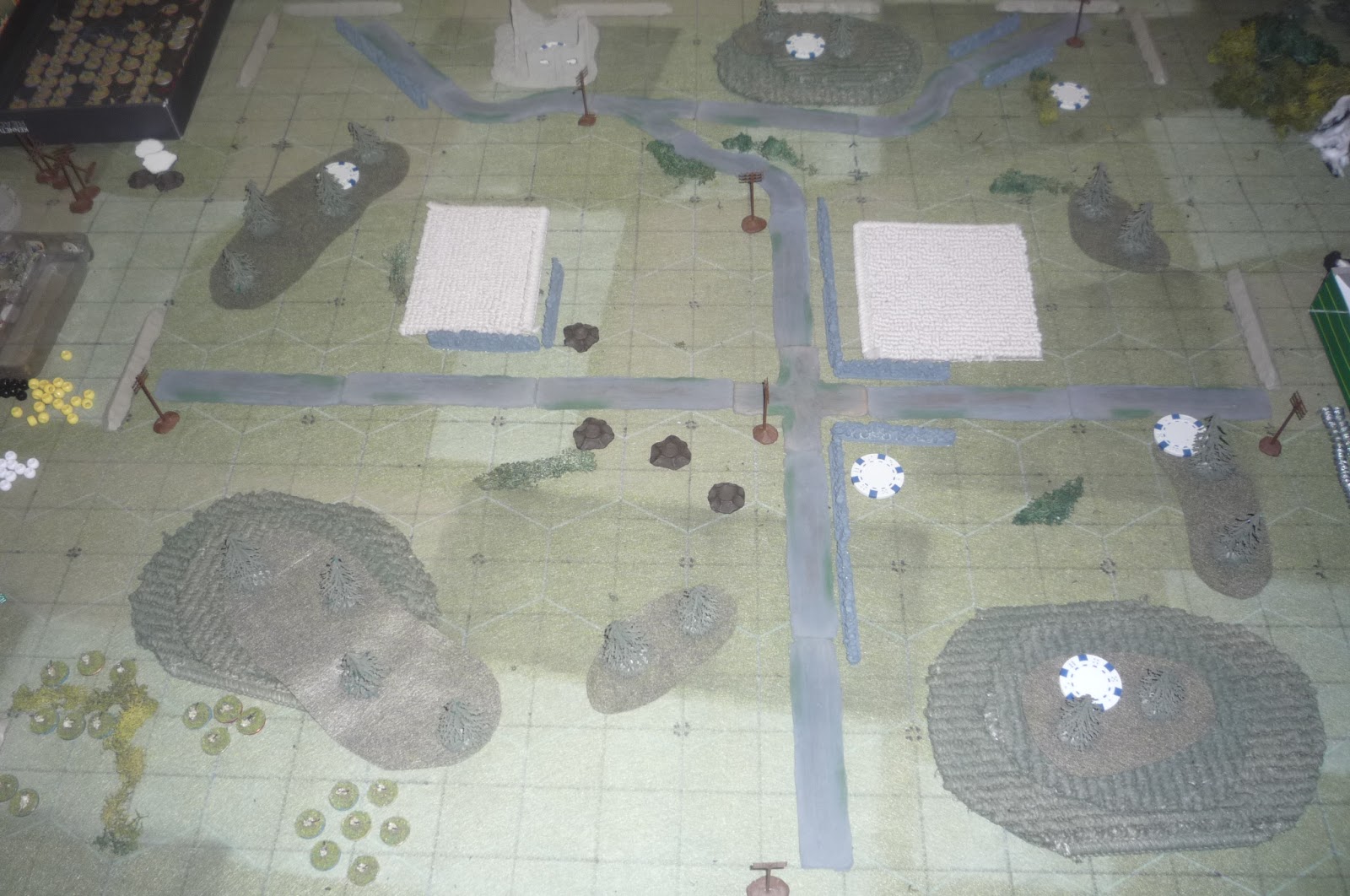 This is ugly, but this is where I started.  Behold, a beautiful HotzMat with hexes, that I destroyed by drawing squares on.  Cake-topper trees spray painted (still use those, actually), latex roads and rivers from JR Miniatures, felt to mark forests, some lichen, carpet for hills and fields, and then craters, telephone poles, walls, and buildings that have simply been spray painted a single color.

So my tables still aren’t amazing, but they’ve come a long way!

Another funny aspect to all this is that I’ve been big into 10mm troops for a long time now, but all my terrain is for 15mm.  I’m actually making another effort to get into 15mm gaming, so that I can try to match my terrain to my troops…

Regarding the German 1st Rifle Company, they moved a little bit, then spent the rest of the game being pounded by the Soviet mortars.  I don’t feel sorry for anyone; the Germans paid for a lack of reconnaissance and a lack of sticking with their plan, both in terms of unit of effort, i.e., where the panzers were sent, and priority of fires, i.e., where the fire support was allotted.  There will be some folks that will say the Germans should have ignored SP Nadia (in the top left/northwest), but that’s unfair as it gives the German player knowledge that the German commander wouldn’t have had (owing to the lack of reconnaissance).  A responsible German commander had to put something at Yuri’s Hovel to counter potential threats to the northwest; hell, a whole Soviet rifle company could have been dug-in only 50m away.  And the responsible German commander had to put his direct-fire supporting weapons (MGs and Infantry Guns) there, as he didn’t have enough infantry to cover the northwest and actually take the target, unless he instead decided to ignore SP Sasha, which posed an immediate threat to 1st Company’s flank.  The case could be made that the direct-fire supports could have simply isolated SP Sasha, rather than using 2nd Company to assault it, and use 2nd Company to try to isolate SP Nadia, but that would likely have fared even worse as the rifle company doesn’t have the range and weight of the MG and IG Platoons.

Though I will submit maybe that is a better course of action; use the MG and IG Platoons to isolate SP Sasha in the southeast, put one or platoons at Yuri’s Hovel to essentially tie up SP Nadia by getting shot to pieces, but depending on how well the Soviets at SPs Nadia and Mila are able to neutralize Yuri’s Hovel, they would then have an easier time chewing up 1st Company coming down the road.  And even if the German 2nd Company only uses one platoon at Yuri’s Hovel, as we saw, there’s not really more room to add those additional troops into the main axis of attack, they would simply have added to the pile of bodies caused by the Soviet mortars.

It was going to be a tough ride for the Germans no matter how you cut it.  The one thing that could have changed it, in my humble opinion, is if German armored reconnaissance could have come on ahead of the infantry attacks to locate determine Soviet strength and dispositions, which would at least allow the Germans to make better use  of their supporting fires, as well as use those recon elements to screen off one flank of the attack (either SP Nadia in the northwest or SP Sasha in the southeast).