Reply To: What a Tanker, solo 6mm game

Update: I have started planning the first part of my campaign.

What a Tanker campaign notes

Concept: To form a German tank platoon and play it through the entire Second World War

The Platoon: 5 tanks, as per German Orbats for tank units (non-heavy tanks)

Time Scale: One game equals a week, although if I have time to play extra games, one game will equal
one day during a major battle. For example The Battle of Kursk lasted from 5 July 1943 – 23 August 1943, so each game played represents a day of this battle, rather than a week. This will be an adjusting time scale, so I won’t have to play then entire battle, just extra games if I have time.

Attrition: A system for replacements will need to be included when tanks and crews are lost. Maybe one die roll at the end of each game week, with an increasing chance of replacements per subsequent week if a die roll is failed.

Rest and Refit: If during the game the entire platoon has no more tanks, then the unit will be sent to the rear to rest, be re-equipped and build up to full strength again. At this point the unit can be moved to a new area of conflict if I feel like a change – i.e. taken from Russia and sent to Europe.

Starting Point: I will be ambitious with this campaign, and start with the Battle of France (10 May – 25 June 1940). I really hope to get some Tank upgrades, or more importantly, some Aces, before heading in to Russia.

Starting Tanks: I think I will keep it simple, and go with the PZ IV D, mainly because I can’t find any 6mm IV Bs or Cs to buy.

Upgrades: I will try to keep using the IVs until such stage as I can upgrade to something with a lot of teeth, should my tanks be able to upgrade to higher levels.

Enemy: I will try to stick to historical enemy troop/platoon orbats, and create a “Theater of operations” chart to provide random enemy tanks per each game. This will include different tank types, and a chance for opposing Aces to be included. The Aces will depend on the historical situation at the time, thus an Ace for French tanks will be less likely at During the Battle of France, but when Germany is on the defensive/retreat later in the War, there will be a greater chance to encounter them.

Background for my platoon: I will loosely base my platoon as part of the 2nd Panzer Division.

Created as one of the original three German tank divisions in 1935, participated in the campaigns in Poland (1939) and France (1940) before it returned to Poland for occupation duties (1940–1941). It took part in the Balkans campaign (1941) and then transferred to the Eastern Front in September 1941.

The division fought with Army Group Centre in the battles of Moscow (1941) and Kursk (1943). After heavy losses on the Eastern Front it was sent to France for rehabilitation (1944). It fought in Normandy and was almost completely destroyed in the Falaise Pocket (1944). It was rebuilt once more and fought in the Battle of the Bulge (1944) and in the defence of the Rhine (1945), surrendering to US forces at war’s end.

The biggest difficulty for this, is the Balkans campaign, and the enemy tanks I would need for it. I have found some Light Vickers Tanks that were used agains the Germans, but this would be very one sided, as a machine gun won’t do much harm to a Pz IV. I might skip the Balkans part due to ‘sportsmanship’ on my behalf.

To Do:
Buy tanks – I will be using H&R simply because they are cheaper, thus allowing me to buy more tanks, and because they seem to have the biggest range of different tanks available.

Make more dashboards – I have enough for four tanks at the moment , so I will need another four minimum to begin with. I might have to have a smaller size printed to get them all on my magnetic white board.

Buy/make scenery – I have some gates and telegraph poles on the way, I will need some houses/farms etc, and make some roads, hedges etc.

Plenty of research for historical dates for battles and theatres. Although the games I will be playing wont actually be that historical, I need the dates and locations to plan the game and have the setting as historical as I can make it.

Find out when the Germans started painting their tanks in camouflage and what styles of camouflage. I can start with my tanks painted grey, but need to know when the colours changed so my upgrades will look the part. (Note – the web page I found the image of the Pz IV above, actually talks about the cammo, which was very helpful.

I have created charts to determine what my Platoon will be upgainst during the Battle of France. It is based on tanks in the rule book, and tanks I can find models of.

It seems I didn’t save my word file for enemy tanks for my campaign, so it was lucky I had a screen shot of it! 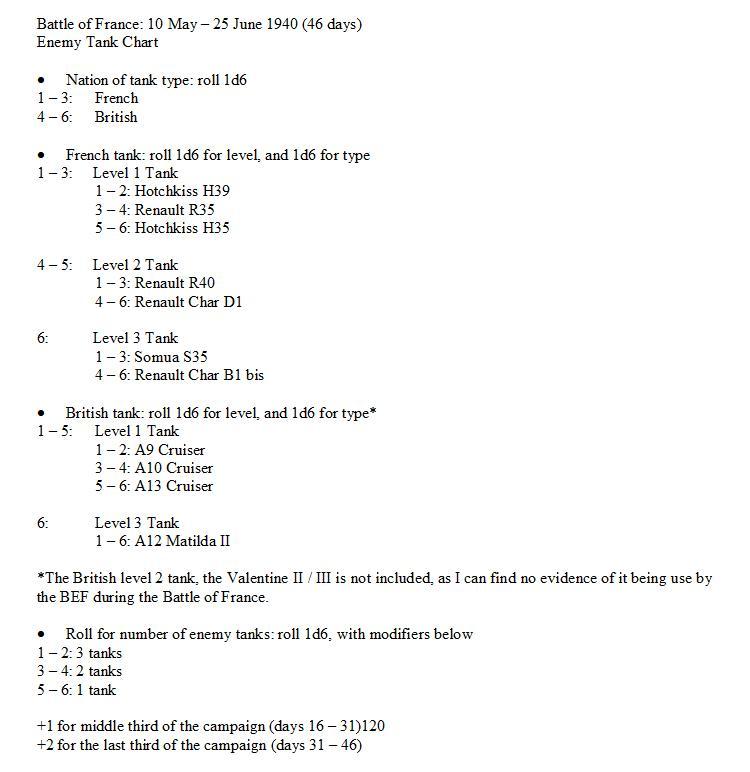