Hi folks. Apologies for the long old wait. I’ve been preoccupied with a bunch of other stuff but now, happily I’ve gotten around to writing up our replayed Raid for you all. Just one more to go after this. As ever, hope you enjoy and thanks for reading. 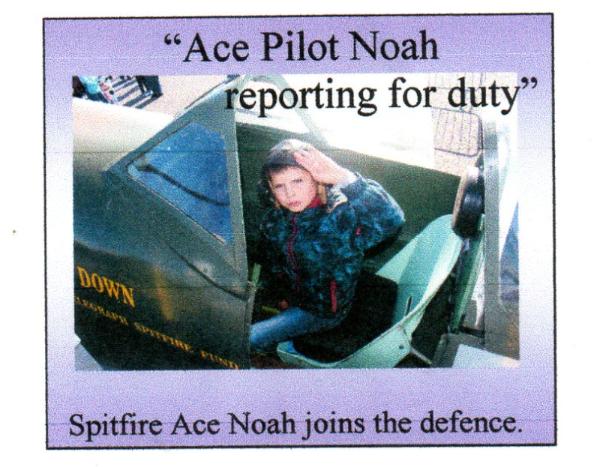 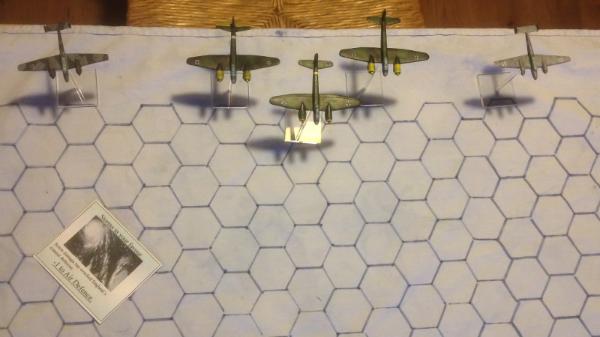 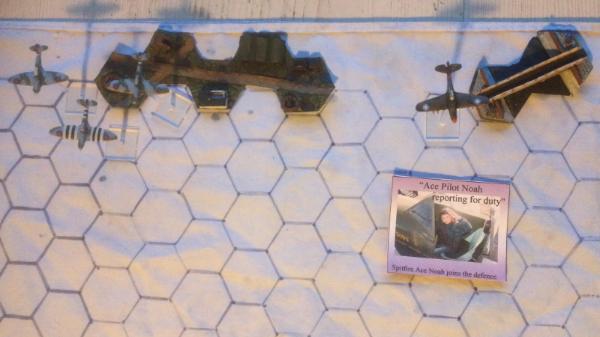 Some days he slept like the dead, some nights he drank like a sailor and awoke to a nicotine breakfast of two maybe three woodbines and felt no worse for it. There was tea and scrambled egg on the base some mornings even real eggs sometimes but he had no kind of an appetite. Most mornings Alfie just smoked in the rain and watched the clouds. It was only really up here, soaring aloft in the white sunlit heavens above the clouds that he thought about food.

He was hungry now, exhausted but oh so alive.

“Tidy up that formation, Squadron Leader.” The unfamiliar voice on the radio broke Alfie’s reverie. “That’s not how we fly a vic at Duxford, gentlemen.” 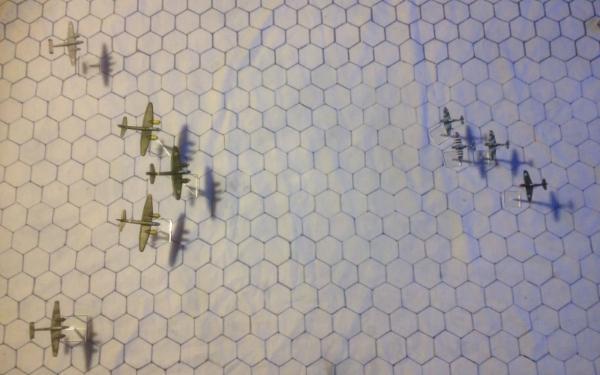 Alfie shook off the daze to find he had fallen well out of formation, he tried to focus taking deep breaths in his oxygen mask and blinking his eyes wide. It wasn’t often the Squadron leader got orders on the wing from a visiting senior officer and it wouldn’t do to be the man making the squadron look bad.

“Enemy sighted, Wing Commander. Formation of Ju88’s dead ahead.” the Squadron Leader announced, judiciously avoiding comment on their formation, “Let’s show them some Biggin Hill hospitality, gents. I’ll take the one on the right, you boys go left. That leaves the leader for the Wing Commander.” It was a clever bit of politics and there was little time to argue. The enemy bombers were closing fast. 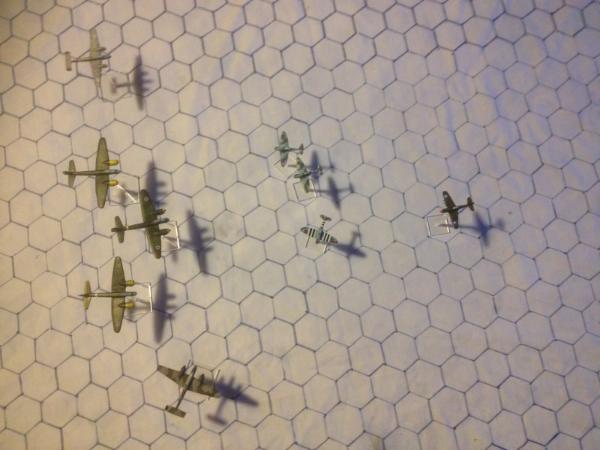 The Squadron Leader peeled off into a diving intercept with the visiting Wing Commander somewhere behind.

Alfie took up position behind Flight Lieutenant Tucker as together they drove their Spitfires down upon the enemy. Now Alfie felt suddenly very awake. His blood sang. Tucker lined up the attack but before he had quite closed the distance a big heavy fighter came diving in from above. 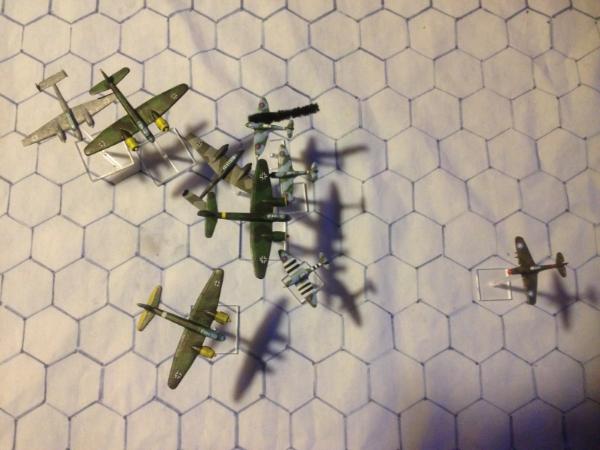 Alfie caught a glimpse of some unidentifiable debris from Tucker’s aircraft whistling past before, for a heart-stopping split second a large black cross on the wing of an Me 110 filled his forward view and then was gone beneath.

Tucker was still on target but the attack had him rattled. He mistimed his shot on the bomber before he overshot a second Me 110 lingering in the rear. 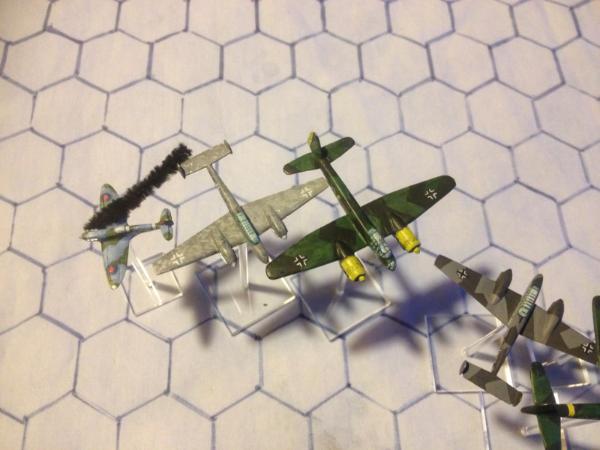 “His fitter won’t like that.” It was the Squadron leader, apparently he’d had some success. 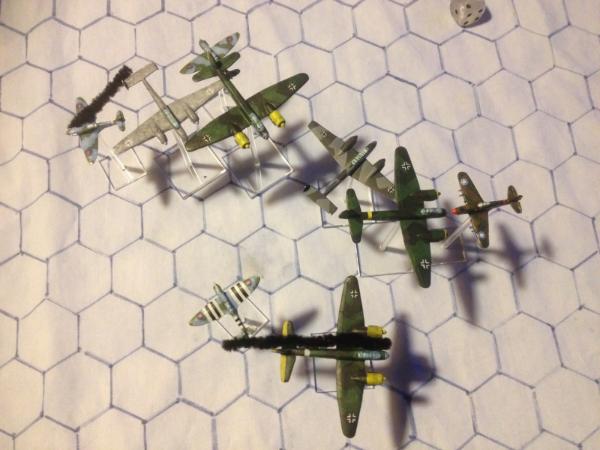 “Made a dashed mess of his greenhouse.” he remarked jovially.

“One Tens?” The Squadron leader scoffed, “No fear.”

But before he could scan around for his next target one of the escort fighters was already thumbing his trigger. They exchanged fire as their aircraft closed the distance, jousting like knights in the lists. Both sustained damage but the heavier machine could take it. 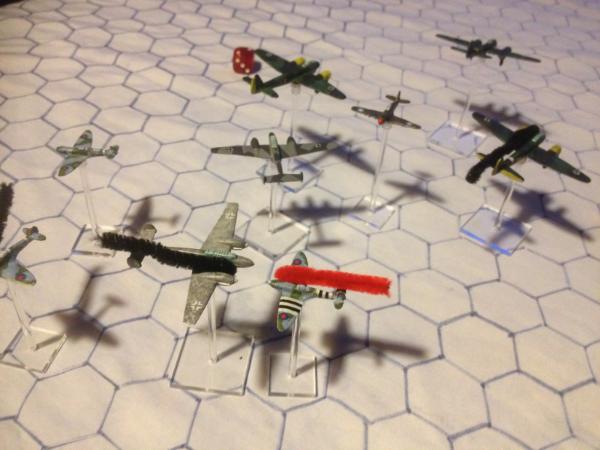 The Squadron Leader’s Spitfire however was done for. With a 20mm canon round in the oil cooler a deluge of engine oil was pouring back painting the nose and canopy a glossy black. It levelled off, the Englishman flying blind for a while before the canopy opened and the man emerged. Trusting to his umbrella he baled out.

“He’ll be joining the Caterpillar club.” Tucker confirmed as the parachute opened.

“Scratch one raider.” The Wing Commander called as one of the Me 110’s went up in flames. 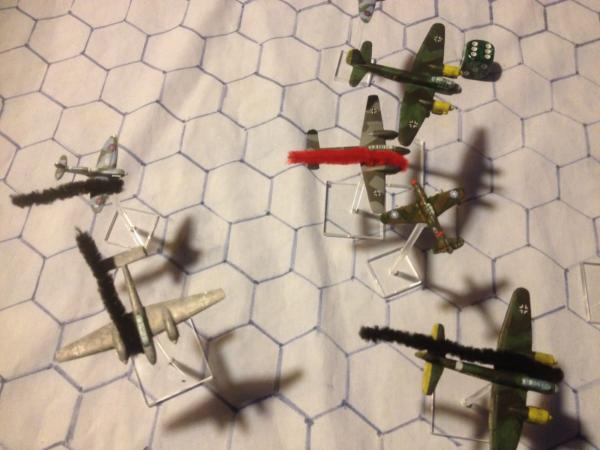 “Now let’s have at these bombers.” 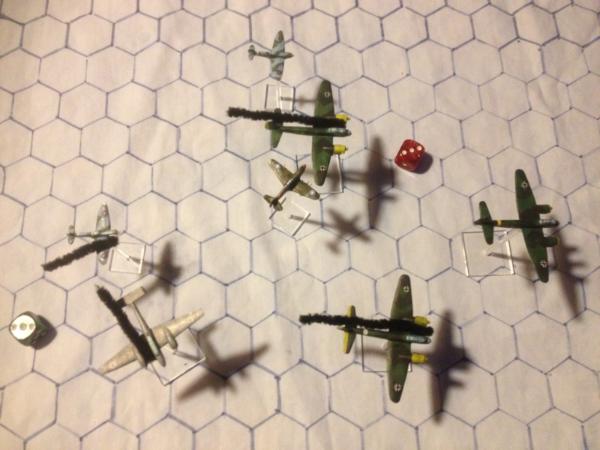 He pulled in hard on the nearest target and gave the bomber a squirt. He was rewarded with a plume of oily smoke from one of its engines.

But these were Schnellbombers and the leader, as yet unhampered was making alarming progress. 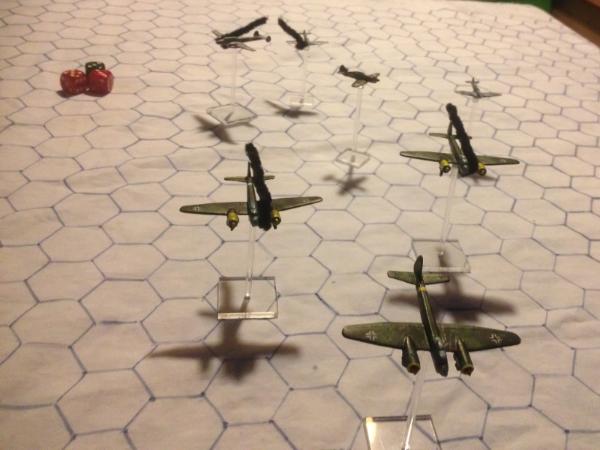 Alfie caught a flash of tracer fire off to his right. The Wing Commander, now intent on the pursuit of the bombers was himself under attack. The second Me110 obviously wanted to pay him out for flaming his squadron mates. 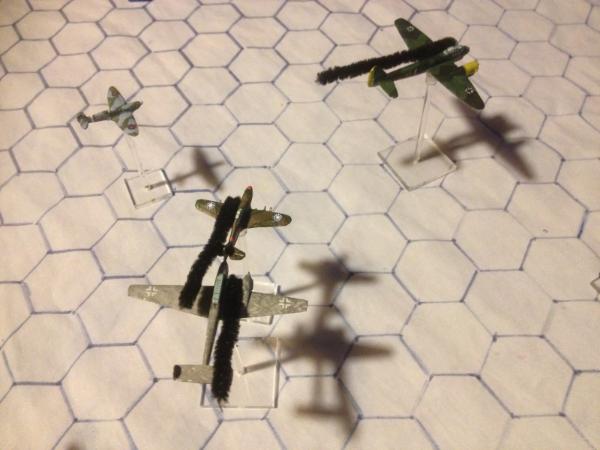 “Never mind that, boy.” the man sounded more than a little tense as he jinked away from the less manoeuvrable heavy fighter. “Tis but a scratch,” he joked, “Now after those blasted bombers!”

Alfie set the nearest enemy raider in his sights and throttled up to a high speed pursuit. Racing in just ahead of the Wing Commander both spitfires closed the distance and caught the first trailing bomber in a withering crossfire. 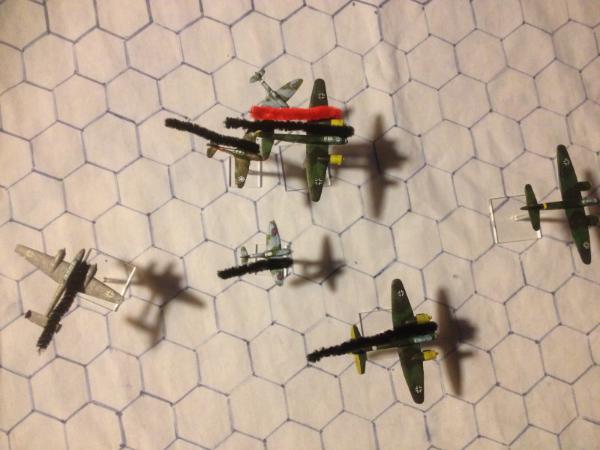 “Steady on there chap,” the Wing Commander warned, “save a few rounds for the next one.”

“This blighter isn’t giving up, sir. I’ve lost some control in the tail, I can’t out turn him like this.” 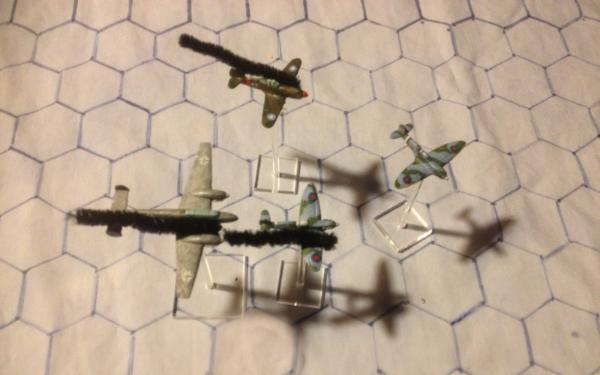 “Then just dive off, Flight Lieutenant, and use as much speed as you can to catch those bombers.”

“Roger that, sir. I’m fighting some yaw but I think it’s throwing his aim off.”

“He’s falling behind, Tuck.” Alfie advised falling back into formation behind the Flight Lieutenant. “Just push her as hard as she’ll fly.” 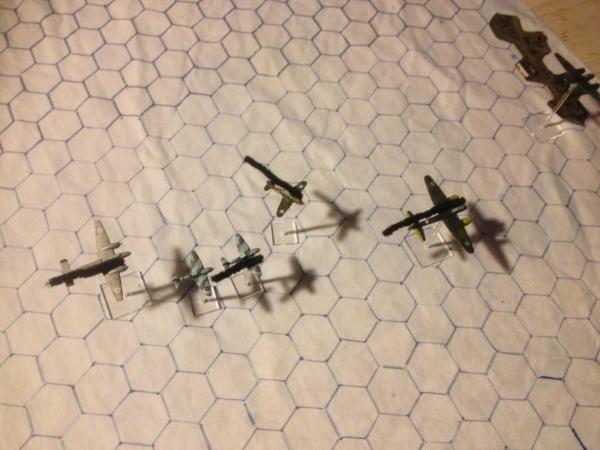 “These Jerries going like the clappers, chaps. It’s through the gate or we’ll never catch them.” The wing Commander put in a burst of speed taking the lead in pursuit of another straggler. He closed the gap but couldn’t deliver the finishing blow. 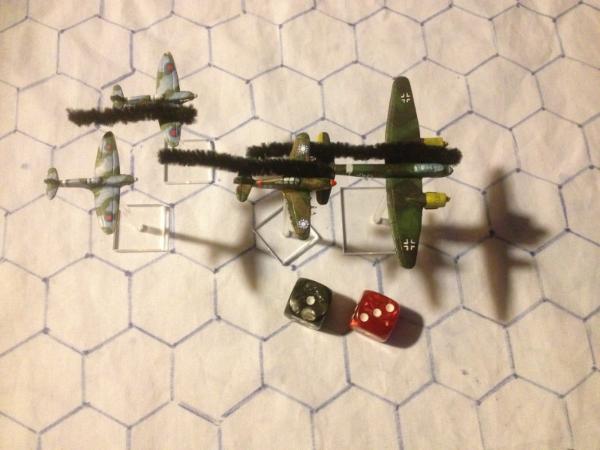 “I’m coming in.” Alfie pushed in over the wings of the two more senior officers, the enemy raider in his sights. Noting a tell-tail stream of blue smoke coming from its left engine he made a move for the right. Dropping the nose of his spitfire, Alfie ducked in closer around a scattering of defensive machine gun fire and brought his sights to bare before leaning hard on the trigger. 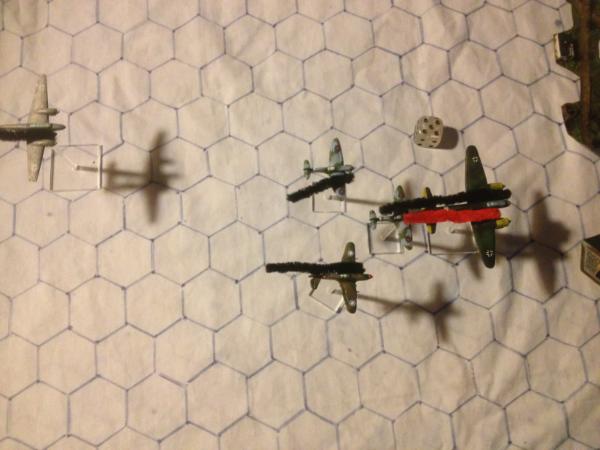 The engine belched a thick plume of black smoke before open flames erupted and burst along the entire wing. The bomber tilted and dropped away slipping into a corkscrew dive.

Not far ahead the lead bomber had made it through. 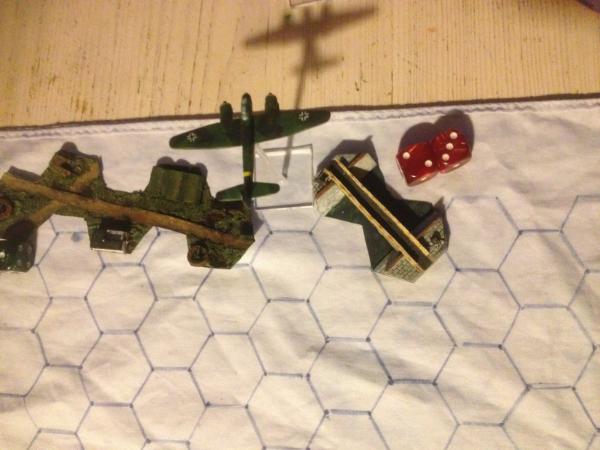 It leapt for joy as its heavy load was released and turned up away for France.

The Wing commander took point on the return to Biggin Hill with Alfie and Tucker falling into a tidy V. 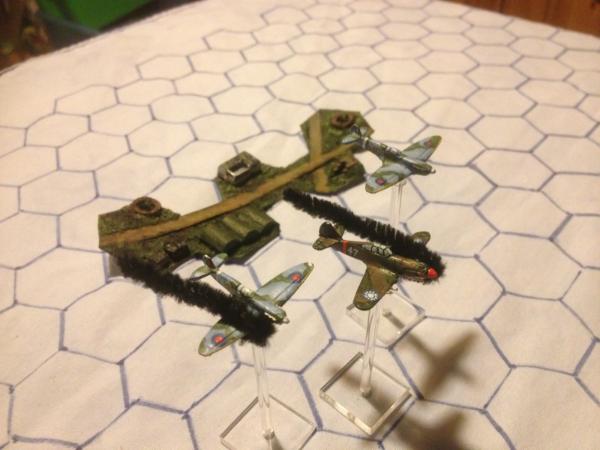 There wasn’t much chatter over the radio now. Each man was alone with his thoughts recounting every action, every choice and consequence.

Alfie hadn’t been hit but the other two aircraft were looking decidedly homesick. He may have survived another engagement with the enemy, he reminded himself but he was by no means out of the woods yet. Already he could feel the creeping fatigue returning. Gripping the stick harder in his trembling hand he sucked deeply on his oxygen and fought to keep his eyes open. Every second came crawling as Alfie battled his way back to the critical point of final approach, praying to God he’d make it.

Wow, right down to the wire that time with a last ditch effort to bag that last bomber, catching it right before it crossed the line. Nail biting stuff.
So analysis time. How did the raid go? Well this time around the old Me 110’s didn’t do too badly. (They did the better the first time we played it, obviously) They scored hits on three of the four Spits downing one of them and kept them busy enough to allow at least one of the fast bombers a good run at the primary target.

The British infrastructure started the game with only 6 points of damage remaining after raid number 5 (including a bit of help from the Royal Engineers) That lone raider rolling only 5 points might have finished off the last objective had his dice come up just one point higher this time. Good thing he was the only one to get through.

So there we are a suitable cliffhanger to set us up for the seventh and final game which (given the fact we’ve bent the rules well beyond breaking point already) we have decided should just be a full blown free for all with all available aircraft still alive on the rosters. With only one point standing between freedom and the heel end of a high Gestapo jack boot it’s all or nothing going into Raid Number Seven.