Day 7:  It had been a full week since they’d entered the middle-of-nowhere town and if things had started slowly they’d more than made up for it by now.  They had had several successful fights against mostly nomads but also a dust up with some wild desert wolves along the way.  Whenever they got back to town Kirkulik was there eager for a body count – whatever they told him Rence was sure he reported threefold to the Beg when he got to the nobleman’s tent.  Rence wasn’t fond of Kirkulik but since the man had recruited them his prestige was tied up with their own, which made him an ally.

The conditions of the blight were proving at least as big a threat as the nomads they fought.  Not only the deadly heat that struck some days and the ever present navigational hazards in the almost trackless steppes, but in this latest fight the ground itself tried to swallow up poor Horsemouth (Rense had teased him it was a good thing he never bathed or he might have been too tasty for the sinking sands to give up.)

They were definitely having an effect, based on what Rense was hearing from the local herders and arriving caravan masters, who all reported reduced tribesmen harassment.  He hoped Whistle would be recovered enough from his injury against the Scorpion Hands to join them in their next patrol.  He had a feeling they’d need him. 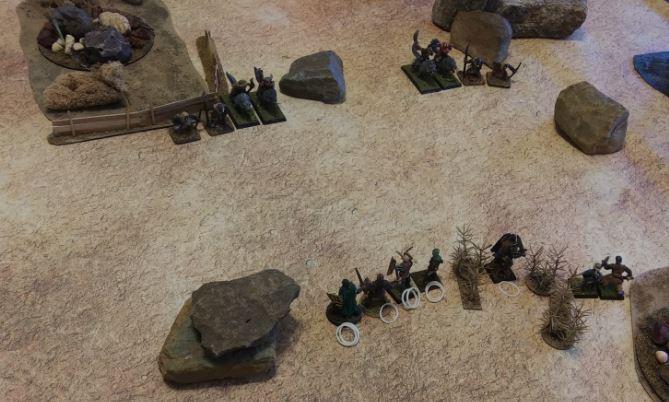 The boys square off against some tribesmen (Sand Goblins!) in their latest contest.  The white rings are ‘will’ markers.