Tuna tins rattled on a line of dental floss in the quiet night. Four people shot up in full alert grabbing their weapons and scuttled around the dump of a safehouse. 1LOVE rushed to the tuna tins, his carbine in one hand, a toothbrush in the other and steadied the dental floss with his feet. Expertly balanced on one foot as he reset the alarm system. 3SOME unrolled a crayon-drawn home defense plan for teh defense of their safehome. 4PLAY scattered Legos and Christmas decorations in front of the front and kitchen door while 2SEXY removed the safety form the pans, rigged to drop over the windows. The four STD agents took position, cold killer eyes staring out into the night looking for victims and yawning in unison. 1LOVE in teh Bathroom guarding his dental hygine gear.
2SEXY in the bedroom with one bed with her hermit crabs.
3SOME in the crowded bedroom and 4PLAY guarding his beloved fridge.
I was too lazy to paint the thing. It’s been sitting unpainted for months and will never get painted.

Flashbangs flew in throw the windows. One of them prmptly batted away by the spring loaded cast iron pan but the other two rolled on the floor before flashing it’s bang. A lone assaulter stepped through the front door, his combat boots unaffected by the legos and Christmas decorations. Swinging his weapon at the first person he saw and sent a hail of bullets towards 2SEXY, sendingher scuttling back behind the Kevlar reinforced chipboard wall. 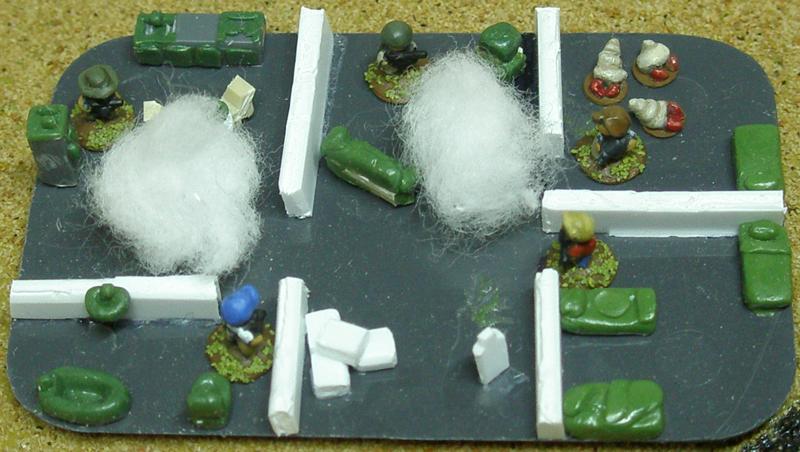 1Love had a clear shot to the intruder, took aim and fired but his crisp movement registered as high threat and he got a face full of lead in return. The man went down where he loved most, the bathroom. With their most expertist member and leader down 3SOME panicked and sprayed blindly towards the intruder. He was still seeing stars and his bullets did nothing except put more holes in their safe house. 4PLAY hearing a lot of gunshots in the tiny shack figured it’ll be safer is he stayed where he was and make himself as small as possible. 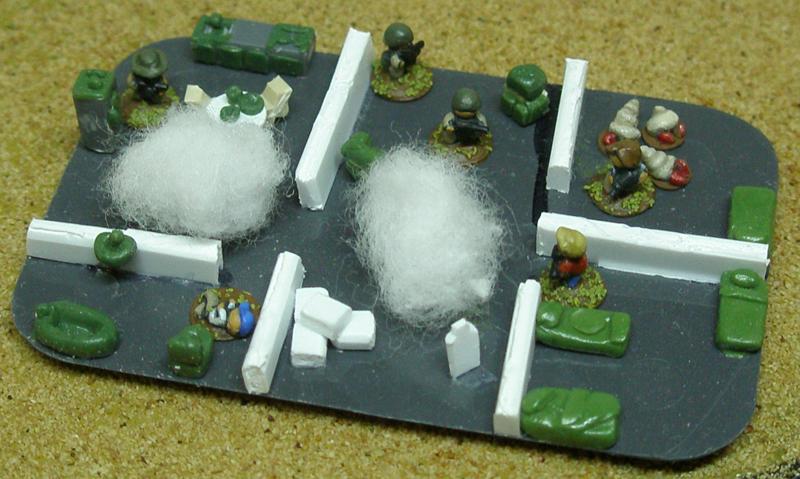 3SOME recovered enough form the flashy BANG and sprayed his SMG anew at the figure in the livingroom and hit him square in the chest. The figure stumbled back, stunned but his trauma plate caught the bullet. More flashbangs flew in, followed by another bad guy. 2SEXY tpeeked her head out to see if all was clear and the new intruder opened up on her but this time she had her weapon ready, ducked low and tugged the trigger sending her attacker backing into the first one. With the two intruders stunned she sent her “babies” after them. The hermit crabs couldn’t do much but kept them preoccupied. 3SOME took advantage of the opportunity and finished off one of them.

While all this was happening 4PLAY was picking his nails, still covering the kitchen door. It was this moment that more bad men with guns came through both doors. They were looking for a fight but were still no match for 4PLAY and his passion for tuna sandwich, taking 5 bullets that eventually punched through the trauma plate and scored the team’s second kill. The two bad guys in the livingroom joined force and attacked 2SEXY once more. Something about 3SOME’s red shirt that they completely ignored. Their combined firepower would have wasted 2SEXY, if it wasn’t for those pesky hermit crabs spoiling thier aim. 2SEXY was sent into cover once more. 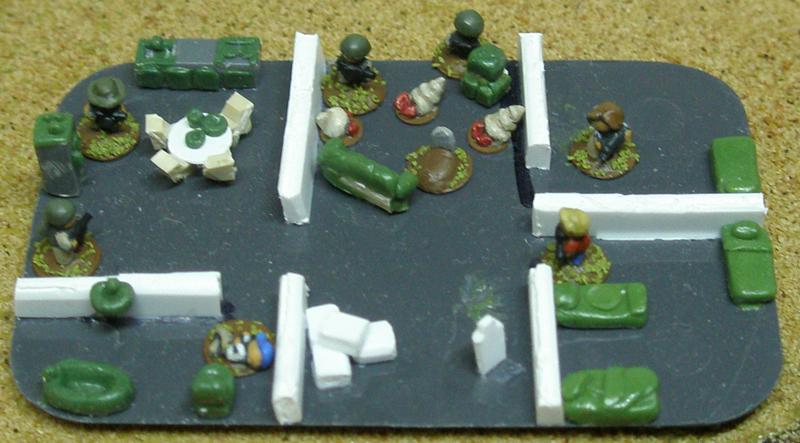 The hermit crabs took revenge for their mother, attacking her attackers in a man’s most vulnerable spot and created an opening for 4PLAY to come around the corner. Unfortunately the natural human reaction when in paint is to tense up and the guns went off exactly as 4PLAY came around the corner. Taking a hand full of bullets, 4PLAY crumpled next to 1LOVE. 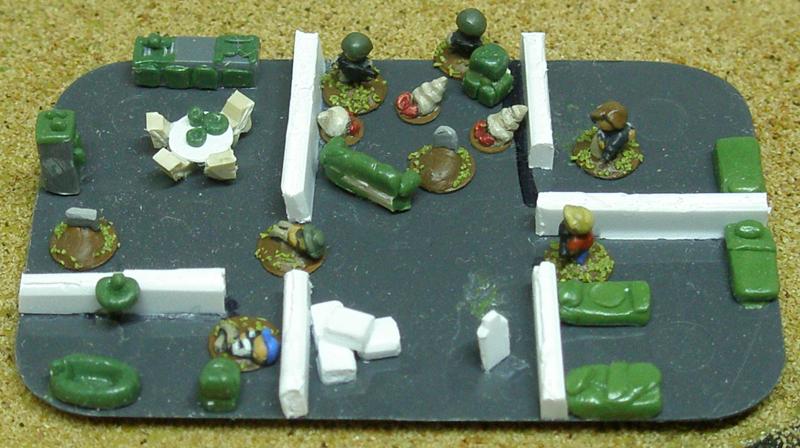 3SOME had had enough and opened up on the two remaining bad guys, and did nothing because they were writhing around too much. 2SEXY worried 3SOME’s lousy shooting might hit her babies popped out to take a look only to jump back as another accidental shot went by her head. The two bad guys kicked around, driving the hermit crabs away and saw 3SOME for the first time. They took aim but the lingering groin pain sent their shots wide but made 3SOME dive under a bed for cover. 2SEXY saved him for more bullets but once again only hit the trauma plate. His buddy reacted right away, peeking into 2SEXY’s room, hunting for a target. 2SEXY backed up taking more cover. The hermit crabs seeing their mother in danger crawled to her rescued but the bad guy danced a jig and easily side stepped their attacks.

The badguys signaled each other before storming the room, taking 2SEXY down in a storm of hot lead. 3SOME deciding to make a run for it, emptied his magazine in a blind burst as he dasked for the kitchen door. Somehow all his shots connected, earning him another kill. Shock! Horror! Their mother down the hermit crabs went into revenge mode and snapped the last intruder in the you-know-what. His face turned purple. And so ends the Battle of Two Bedroom Slum Hut. 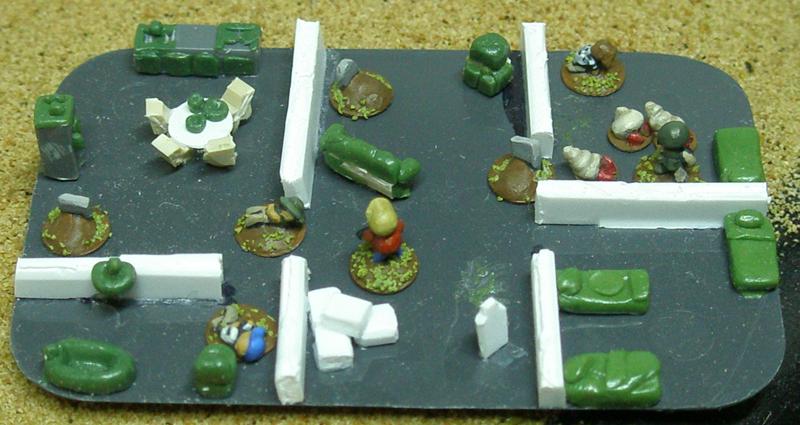 3SOME made clicking noises like he saw 2SEXY do when she talked to her hermit crabs. The crabs somehow understood and stabilized the three downed members using hermit crab advanced first aid fu. They even managed to getthe bullets out of their human slaves with their little crabby claws. 3SOME gathered up his gentalman’s reading material but stopped by one of the intruder and pulled down his pants.

As the rest of the assault force wondered why everything went quiet, the three hermit crabs dragging a casualty each followed 3SOME as he sneaked off into the night in search of a new hiding place.