Finally been able to do some typing on this project, and crystallize my thoughts on this project over the last few months. It’s always scary when you don’t write something for many months (will I actually finish this game? am I needlessly re-thinking the mechanics, over and over in a never-ending loop?) but once you’re back into it, that fear goes away.

The main thing I wanted to change was the flow of the turns – players needed more control over being able to move troops longer distances and organize air support / tunnel movements, etc. without having to place markers and wait a number of turns. Reading “Sons of Kolchak” helped to give inspiration on how a Company Commander thinks and what he’s able to do. Its not so much about the “day in the life” of an infantryman (which was the way I had been writing the game), but its more a selection of engagements, movements and reactions.

So over the past 2 days I’ve been typing up how the turns should work: I knew I wanted 2 distinct phases – a tactical phase (with troop movements on the ground) and an operational phase (with air support called in, more ‘strategic’ long distance troop movements, and so forth). These 2 phases could be interchanged at a cost to the commander (so they could use an operational asset during a tactical phase, but it would cost them perhaps an extra operational asset discarded). 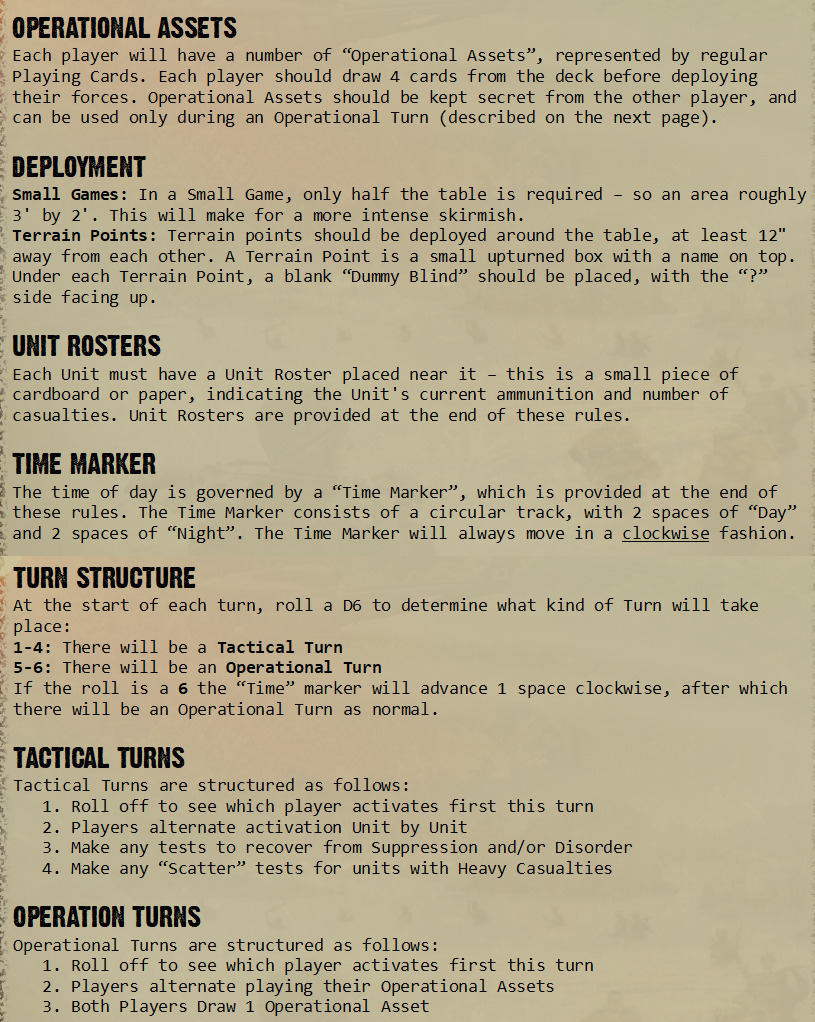 The Idea of Operational Assets came to me today – instead of players purchasing tunnels or waiting for their troops to call in air strikes, why not have a deck of cards, from which they can choose which asset to use in-game. This would play right into the hand of the Friction that I desire in the game play – you might really need an air strike, but all you have is mechanized infantry reinforcements, which will take time to get across the table. Or you might really need a tunnel system to get out, but its not there…

I’m also looking at making the Platoon / Unit Roster much smaller and more compact (only showing the ammunition and casualties of a unit) so it can be placed next to the unit instead of being a large thing which tracks a bunch of stuff off the side of the table. This will help keep players immersed and show directly the condition of a platoon.

I’ve been thinking a lot about how to get rid of a lot of the game markers – for example instead of using markers to show prone / running / etc. , using a reaction fire system, where depending on how far you move, the enemies fire has a different effect. For example if you crawl 2″, the enemy will not be able to inflict casualties, but if you move at a full run, the enemy can inflict casualties, disorder, and suppression.

I don’t know if the reaction fire system will work, as its quite alien to the current system, but I will attempt to get rid of unnecessary markers. On the opposite end of the spectrum, I thought about having markers showing stance, so that individual squads could have their own stance rather than tracking it on the platoon roster. There would only need to be 3 states – prone, cautious-upright, and oblivious / running. This could be represented with a triangular piece of cardboard (like an A-frame house – although this would become a mess in larger games) or by only representing 2 of the 3 states with markers, so that the most common state would require no marker. I will need to think about this further…

Our wargames club reopens this sunday, so I might be able to get a playtest in, but 2 of my playtesters can’t make it, so I’ll have to check with another.