Did some more “gutting” today – stripping out the old casualty rules so they will line up with the new platoon roster, and simplify things down so you don’t need to track different kinds of casualties on dice. Casualties will now be tracked using a pencil, with a / mark indicating a light wound, and a X mark indicating a severe wound / KIA. These marks will be made on the platoon roster, which will be small enough to sit next to the miniatures.

Speaking of which, here is my mock up for the platoon roster – this time using Gravit Designer (which is much better for this kind of mock up than paint.net).

The “aware” box will start off unchecked, then become checked once the unit detects enemy or gets fired upon.
Ammo will function as it did, but casualties will now show that the unit is in “Heavy Casualties” without needing a separate marker.

I also did quick tables for what the operational assets might be for the US and VC: 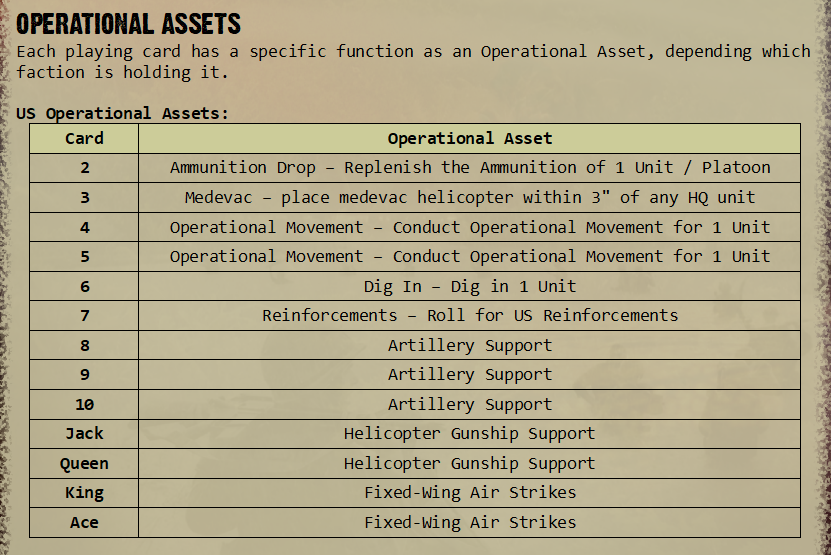 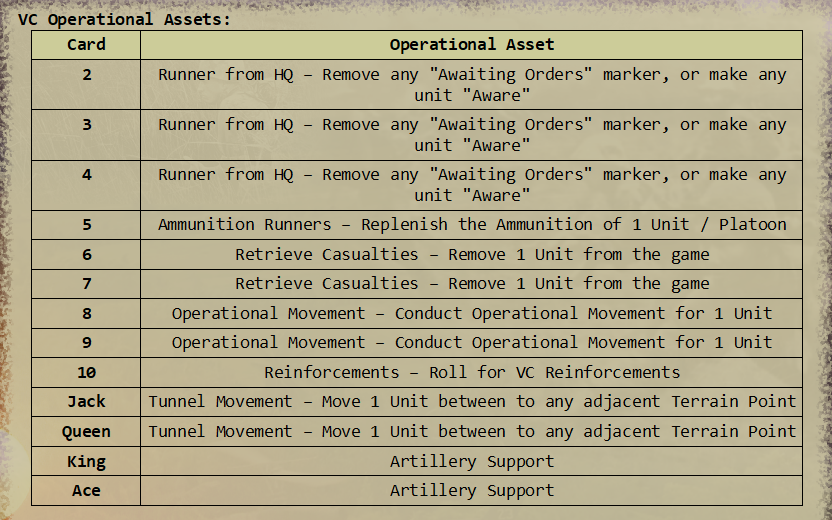 The effect of each card at this stage is just an idea, these things will be solidified during the next week and next playtests.

There’s a feeling of fresh air coming over the ruleset, as I discard some of the stuffy mechanics from earlier this year. I won’t throw out everything, as many mechanics are working well, but I’m hoping to make the rules faster, and more action-packed, with a bit more randomness in regards to what support you can call on. This will add an element of resource management to the command decisions.

I do need to be careful with the whole “Draw cards to do stuff” idea, as things like Air Strikes and Artillery played a huge part in the US tactical operations, especially if a unit was in contact. I will need to give the US ways to get the cards/assets they need, although perhaps sometimes having to wait a turn or two. Likewise for the VC – I don’t want to have it solely random as to what operational assets can be used, t here needs to be some kind of mitigating element to the randomness, whether this comes from being able to draw more cards, or look through the deck, or have some cards as multi-use, or combining together to create different effects (like a 5 and a 7 being able to combine to get an air strike).