With regards to realism vs. playability, I’m still aiming for realism, just in a more playable way, without taking notes and having roster cards and suchlike. It’s been an interesting design challenge to meet the same end results only using dice, without adding extra markers or tokens.

Good point about forced retreats, at this point the unit attacked needs to succeed a skill check, if they fail they are forced to retreat. I have read about units of all kinds having to make withdrawals from combat, even VC / NVA. My main concern was to prevent units in bunkers or trenches from being forced to retreat, as they would know their position is incredibly strong – it would require close combat and grenades / flamethrowers / point blank firing through gun ports to dislodge them.

Had a great playtest yesterday, US rifle platoons on foot supported by a pink team (OH-6 Loach and AH-1 Cobra) and a further Huey and Loach.

This would be the first full test of our new streamlined infantry rules, and it went very well!

Sticking with out standard “Search and Destroy” mission, where the US need to search village buildings. The US came from opposite sides of the table, with the NVA / VC deploying in the center. 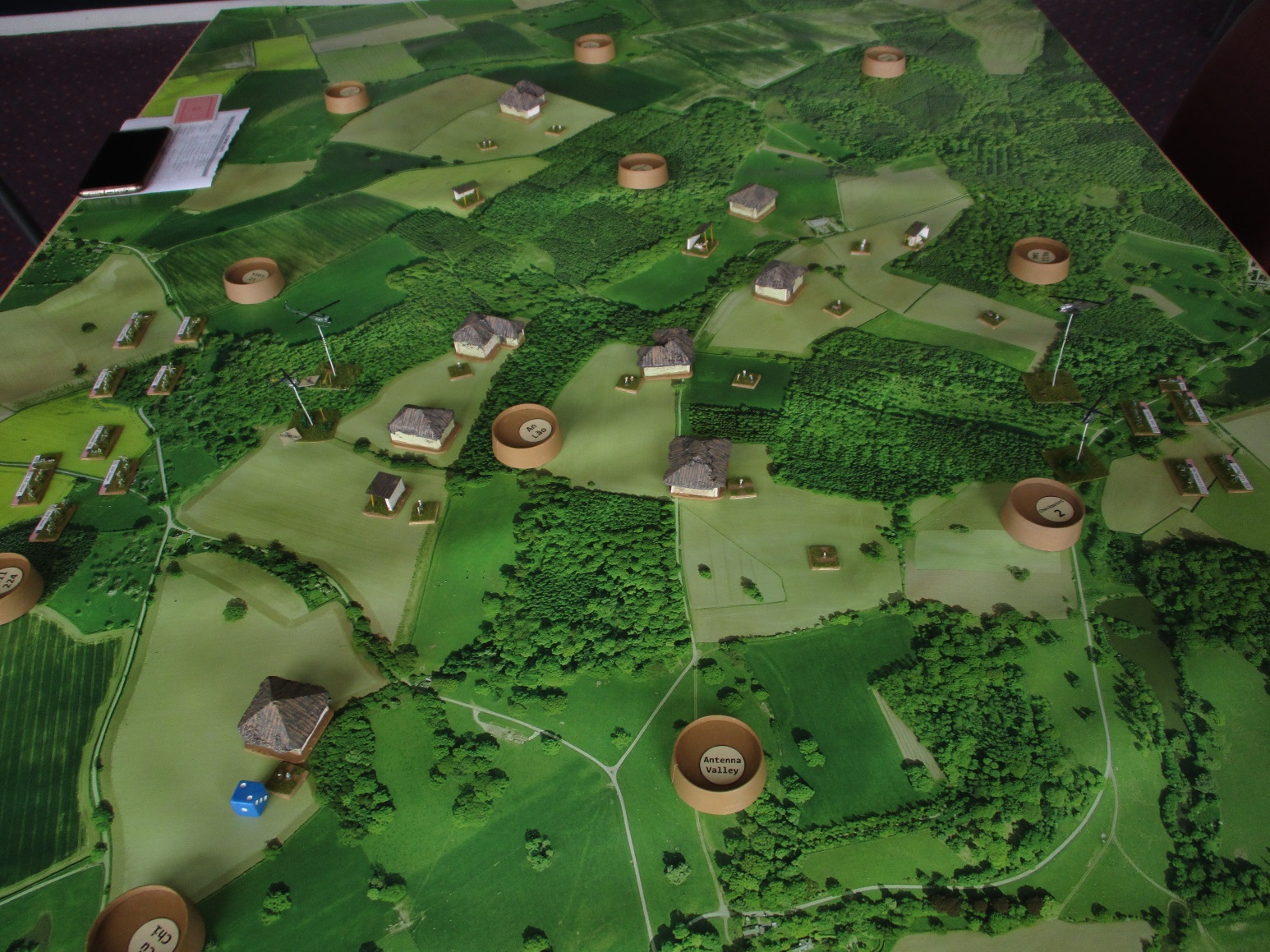 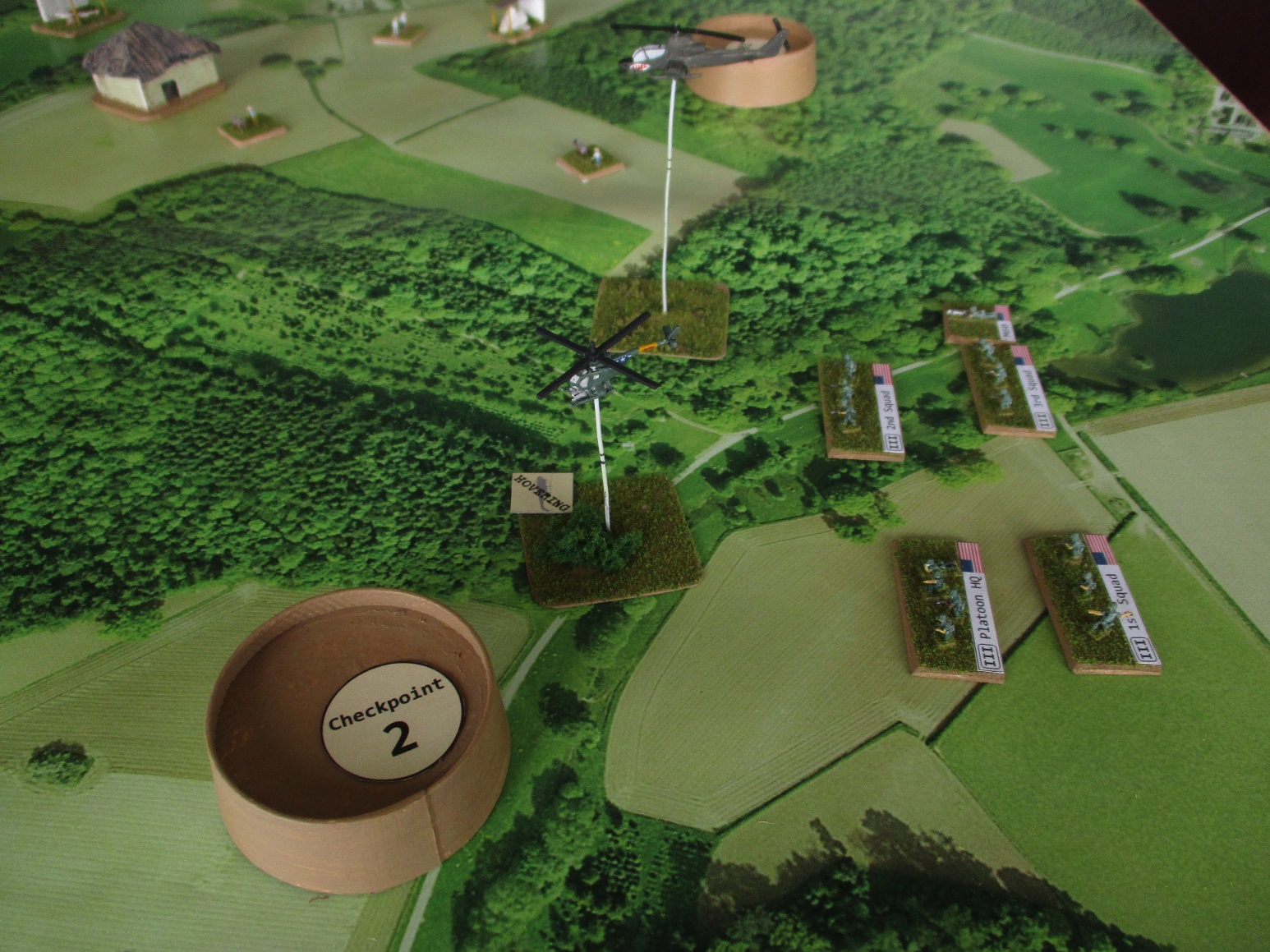 One of the US platoons, supported by a Pink Team

The game started badly for the US – while attempting to detect enemies, the loach of the pink team misidentified the US platoon as enemies, and both the loach and cobra started strafing them, inflicting casualties on the platoon’s HQ. It wasn’t enough to wipe out the HQ unit, who were able to call off the attack, even while suppressed by rockets from the cobra. 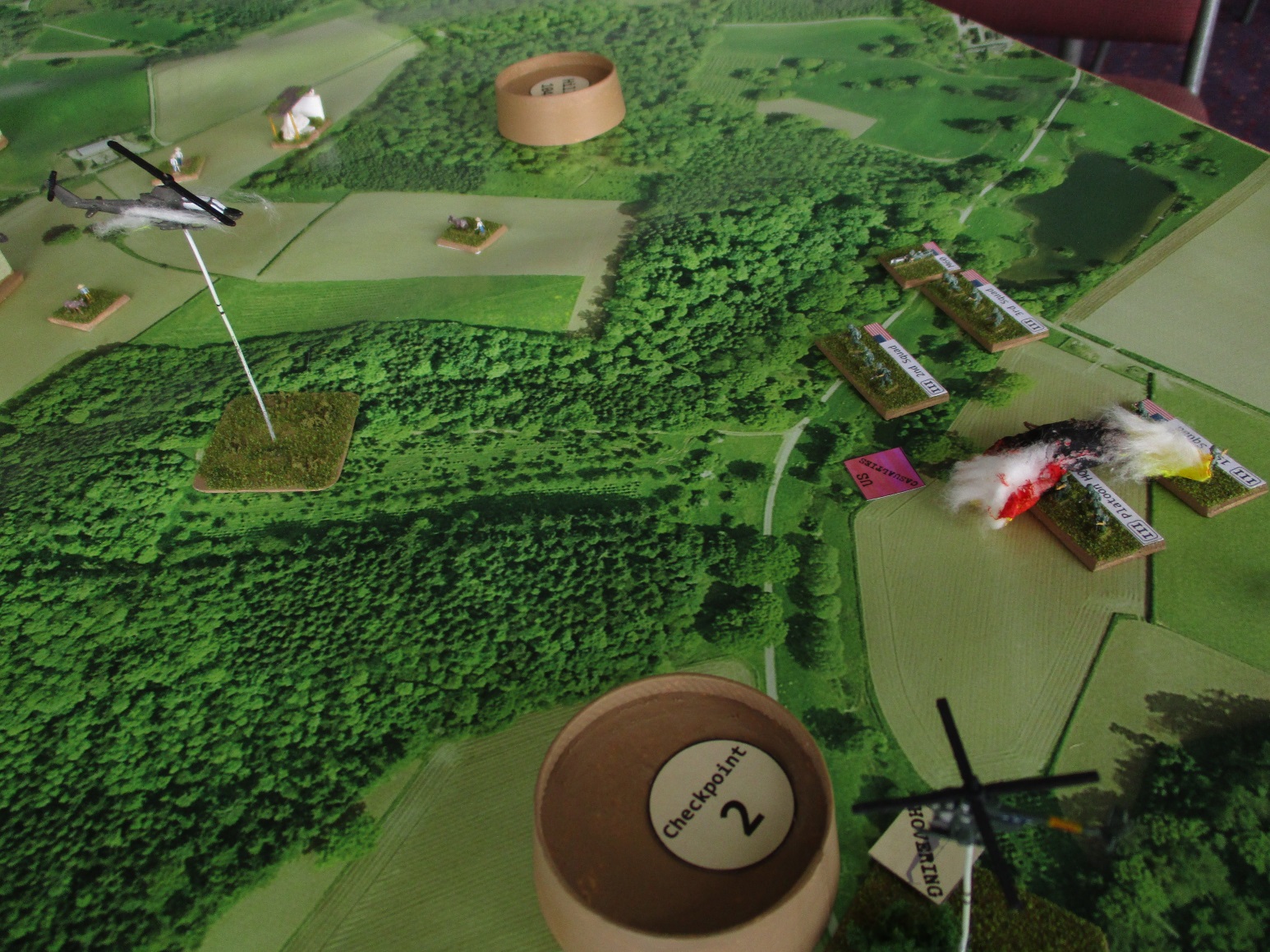 AH-1 Cobra strafing the US 3rd platoon HQ – “CHARLIES IN THE OPEN!” The helicopters were given to the VC player to control after rolling snake eyes on a detection attempt.

Actual VC then appeared from the treelines around the beleaguered US 3rd platoon, with one squad charging against the exposed HQ unit. 1st squad was able to blunt the assault, and the HQ remained in action, although still suppressed. On 3rd platoons right flank, more VC appeared, but quick actions from the right-most squad allowed the US to flank the VC through the forest, and cause them to retreat. 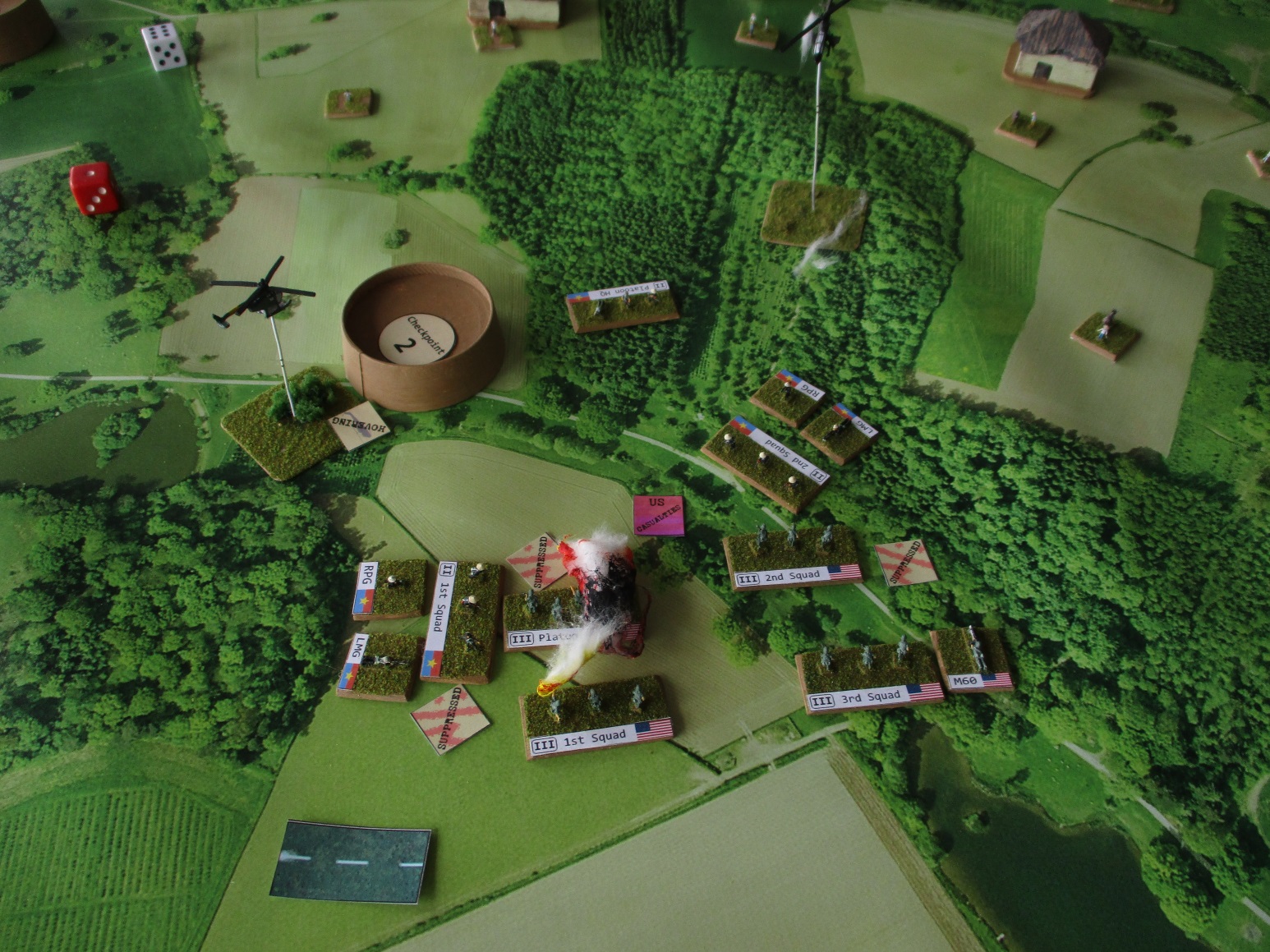 VC appear from the treelines around US 3rd platoon

Meanwhile the Loach was providing covering fire for 3rd platoon, now realizing who the enemies were, when 2 RPGs streaked past his canopy BREAK RIGHT!
The loach was immediately pummeled with small arms fire, and it turned out he was in the middle of an NVA bunker complex! a full strength NVA platoon, heavily armed with LMGs and RPGs opened up on the loach, and one crew member was killed outright. The other was badly shaken and the Loach immediately RTB’d, leaving the battle. 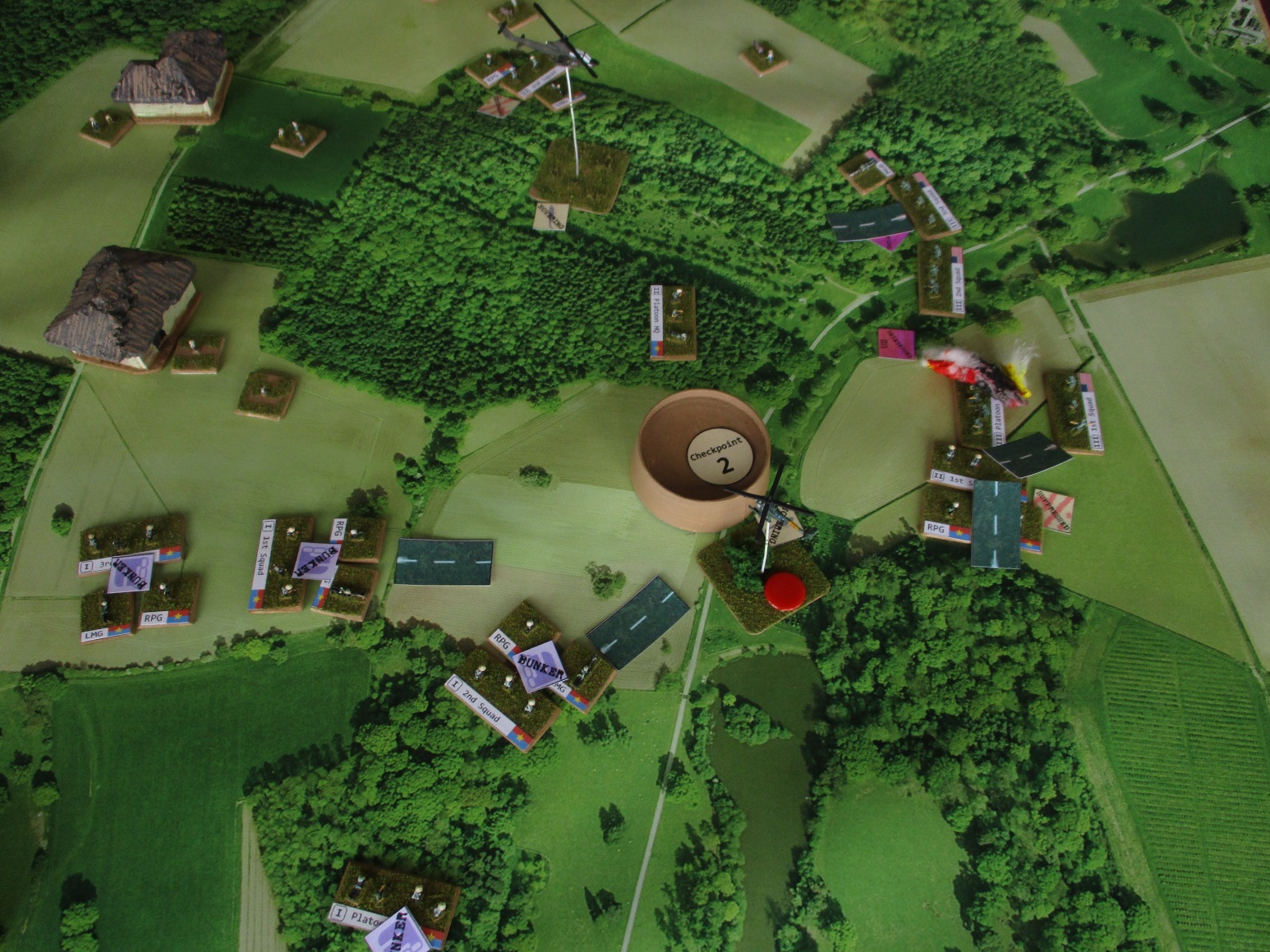 Now realizing what lay ahead, as the loach drew fire (just like in real life) the Cobra attempted to get a bead on the bunker complex, although couldn’t work out exactly where the openings were, even while hovering low and slow.

Probably not a good idea hovering around a full strength NVA platoon, as 3 RPGs and a multitude of small arms fire rained into the cobra, killing one crew member, disabling the weapons systems, and causing engine damage, which later led to the engine cutting out. The cobra executed an autorotation and made a controlled crash landing (oxymoron?), albeit in the center of the NVA bunker complex – that isn’t going to end well for the 1 remaining crew member! 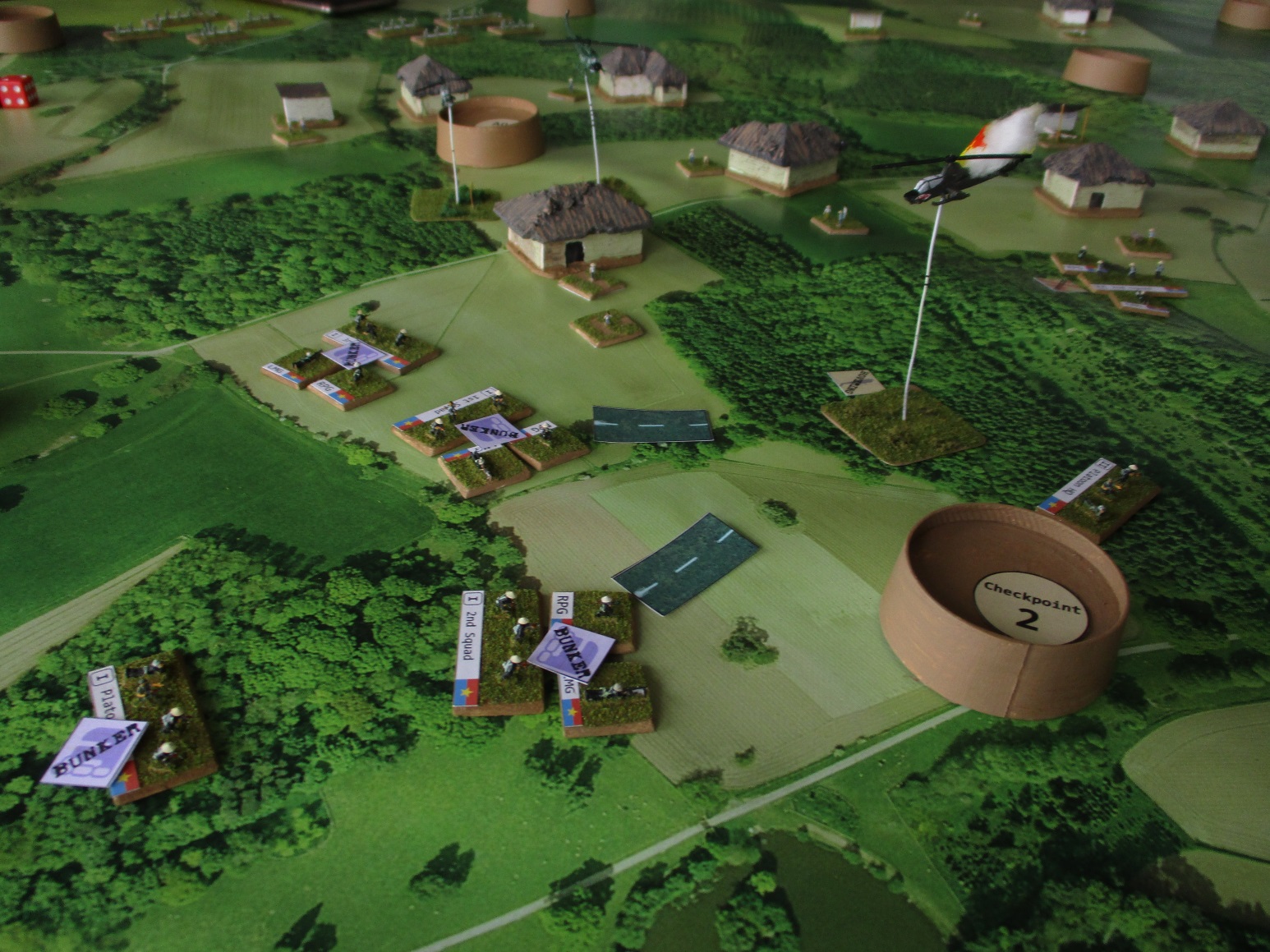 The core mechanics are going well – the detection and fighting of infantry seems solid and almost no notes needed to be taken. The main thing I had an issue with was the Cobra being shot down – I didn’t read anything about cobras being shot down by RPGs, and the loss rate of Cobras was relatively (!) low, compared to Loaches and Hueys. I will do some small scale tests with bunkers, detection, and cobras to get it feeling right. An easy fix might be to allow cobras “direct HE” fire without having to hover low and slow, as the rules currently work, this would completely prevent RPG fire from effecting them, and still allow them to make attacks on bunkers, as I read in 19 minutes to Live.