Okay, what the hell is going on here???

First, thanks Kyote and Sparker, I appreciate it.

Panda – What the hell was that?  With the first part, what the hell are you talking about?  The only thing I’m mad about is you breaking down the table I was whooping Ivan on to play My Little Pony.  The second part: well, if you’re serious (and it’s always hard to tell with you), thanks a bunch.  But you did go a bit overboard 😉

Regarding the one actual wargame question (why did I move two teams of TOW1 north?): 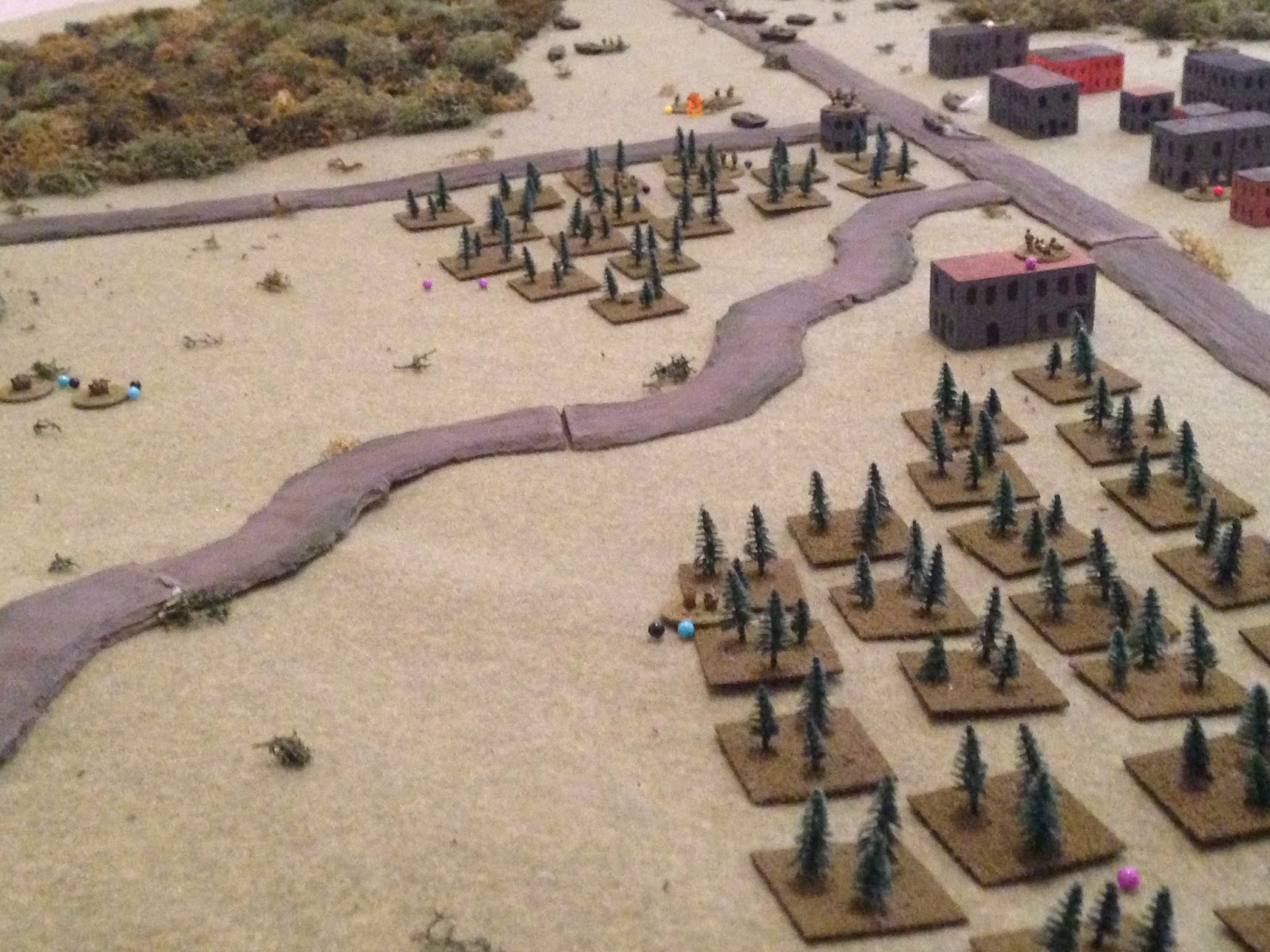 So, the two TOW teams in question are at far left (blue beads), just short of the treeline off camera to left, and the photo is looking west to east.  The two TOW teams had initially set up and fired from the top edge of the cluster of trees at center.  So, first things first, the TOWs have got to move as everyone in the world just saw the flash and crap thrown up in the air, so they fell straight back (west, towards the bottom of the photo).  Falling back to the building at center right (gray with orange roof) won’t work because 1) by the time the TOWs get in there and reload, the Soviet mech units (top center right) will be inside the TOWs’ minimum range and will quickly overrun them, not to mention the bunching up that will occur, making them an even juicier/easier target.

If the TOWs fall straight back (down/west), they will not make it to the treeline at bottom center-right in one move (just like the didn’t make it into the treeline at far left/north, in one move).  But the difference here is this: the Soviets are intent on pushing Mech  units up the road at far right, infantry straight through the trees at center, and tanks (currently just visible at top center) coming left around the trees at center, then coming straight into the US rear (coming down the photo).  So, moving north allows TOW1 to physically get out of the way of the Soviet Mech units and infantry, and out of the ‘line of concern’ of the Soviet tanks that will be rounding the corner.  If the TOWs moved west, they would be lucky to not be eaten up by enemy infantry or BMPs, and if they did make it to the treeline, by the time they got reloaded the Soviet tanks would be inside their minimum range.

So, by moving north, they are putting themselves in a defilade position to let the Soviet tanks go by (moving west/down), then fire into their flanks, keeping the range open and not placing them in a position to be overrun.  As a matter of fact, they could even fire then displace further north, or even east, to continue supporting the main effort of delaying the Soviet advance.  The friction comes in 1) when you’re unit gets to activate, and 2) how far they’ll be able to move.

So that’s that.  The funniest thing about this is that two guys from Canada are trying to make fun of Texas???  I’d go farther down that path, but I don’t have the time you and Rod apparently do, so I’ll sit back and observe the two of you slap fight over what color lipstick you look best in, and keep working on my batreps, that are apparently gifts to the entire human population 😉

And thanks Rod.  I think; again, I can never really tell with you two!  You both certainly swung the pendulum too far this-a-way…