Reply To: Since my first sand pit, where I stove cusin Jean's head in with a coal shovel..

Unless you have lots of time and storage it’s always going to be difficult to do the ‘large scale’ desert terrain features.

I compromised on the escarpments by doing them as cliff’s to the front and shallow slopes to the back, you have to imagine that the cliff to the front is just a steep slope and the slope at the back is flat and higher – only at the coast were the escarpments high cliffs. They are made from 20mm insulation foam.

The base tiles are another time, money and storage saving measure. they are the backs of static grassed terrain tiles by TSS (originally made arid for my Crusades stuff); they have been painted and stippled with household emulsion paint.

The wadis are foam board edges on 2mm MDF with sand and grit. I did a ‘how I’ for these:

One thing about the desert though, once you have a few basics you have most of what you need – there are no woods, hedges, rivers and the like to worry about and very little fighting happened in the coastal towns (none during Operation Crusader). There is just the odd isolated building – the settlement of Bir el Gubi, the scene of much fighting and very typical, was described by Robert Crisp as a single white building surrounded by a low stone wall.

Some places, named on the maps (see below; the map used for the battle above – the British infantry are holding the escarpment north of the landing ground [L.G.]) didn’t even have a building there; Trigh Capuzzo, the second most useful road, running east west, was a rough dirt track only useful as a means not to get lost. I have three desert buildings and don’t need more, not even for a 15 x 6 table.

Terrain was one of the major deciding factors in being able to change scale from 28mm (non-WW2 collections) to 15mm – I didn’t need to double buy or make tons and tons of new terrain; big tables have their disadvantages! 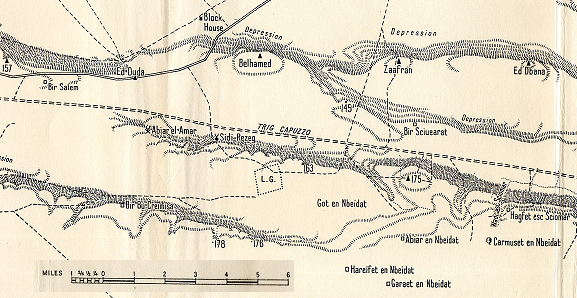