Yes, I’ve read about that too. I’ve also read that most of the killing was done by just 4% [?] of the combatants, which isn’t that surprising as a similar percentage of the human population have psychopathic tendencies! I also saw a documentary, years ago, that said, in terms of explosive power, each casualty [fatality?] took the equivalent of 5 million bullets to achieve.

I’m afraid I’ve landed myself with the full measure of artillery mission possibilities as I game one unit is a company, the lowest command piece is battalion, and there are normally two levels of command featured above that – namely, brigade (regt. for German) and brigade group / battle group /  Division. I’m normally gaming with a lot of guns per side. My 2nd day at Sidi Rezegh re-fight featured five full batteries of 25pdrs for the British; 3 batteries of 10.5cm, 1 battery of 15cm SP infantry guns and three batteries of 21cm batteries for the Germans.

Here are the OOBs for that engagement: 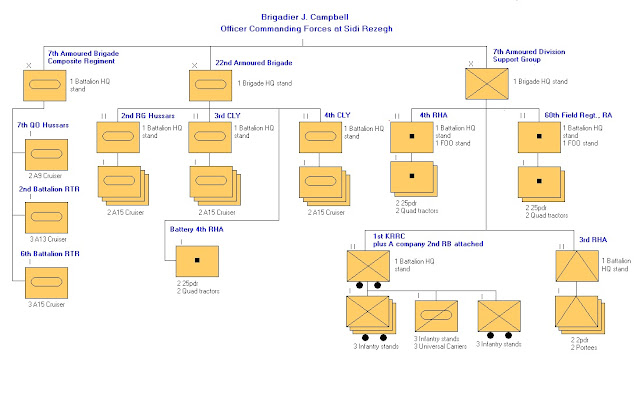 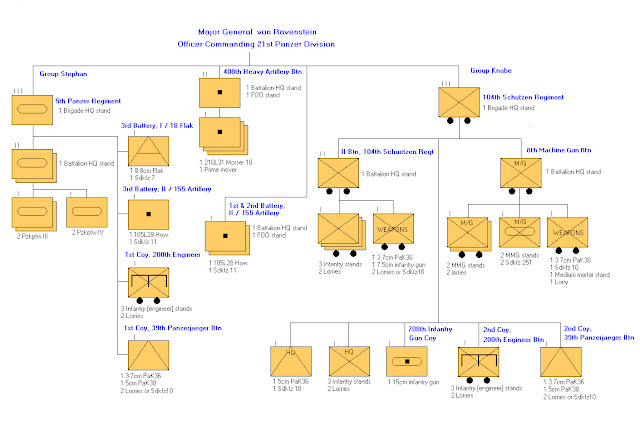 Link (for those interested) to the other scenario notes here:

I’ve simplified my artillery to three types, in game terms, and to avoid confusion I’ve tried to call them by ‘game’ names. They are definitely a bit gamy, but they have something of the right flavour (I think).

1. Strike. Short and intense fire. Direct or indirect. Actually lasts only a small part of a 30 minute turn. Fired at specific targets, most usually a single unit. May be called as opportunity fire in the oppositions turn. Indirect missions need to be called each time requested.

2. Barrage. Indefinate fire at moderate intensity. Direct or indirect. Uses an area template centred on a specific stationary target; troops moving through  count as shot at as soon as they enter – they take fire from the previous barrage card.  Has better effect vs troops dug in and so forth than Strike. Cannot be fired as indirect opportunity fire in the oppositions ‘turn’. Missions may be automatically cancelled following resolution on a barrage card.

3. Harassing barrage. Indefinate fire at low intensity. Indirect. Similar to barrage but using a much bigger zone with less effect. Harassing fire does not end automatically; fire must be cancelled immediately a barrage card is played (before resolution) before the guns can be trained on a new target. Cannot be used as opportunity fire. Usually the realm of medium and heavy off board artillery.

Something that is a bit of a bugbear about artillery fire for me, is the war gamer’s seeming obsession with ‘artillery drift’ (not landing on target). Most WW2 war game rules I’ve read have hit and drift mechanisms, why? From everything I’ve read this is a load of rubbish. Artillery strikes are not just fired ‘ shoot and hope’. A ranging shot is fired, it is corrected, all the guns in the battery calibrate to the ranging gun and shoot together for effect. Low and behold, almost the whole lot lands on the target area. That troops suffered friendly artillery fire in WW2 is not in doubt, but this was almost always a case, like friendly fire today, of fire that was misdirected; the guns hit (within the bounds of expectation) what they were aiming at, what they were aiming at was the wrong target. What’s more, significant friendly fire incidents were, like nowadays, actually quite rare. My artillery always lands on target, it might not do any damage, but it arrives where it is aimed.  Aircraft are another story.

Oh, have you seen this idea for off table artillery markers – saves any paperwork and they are cheap as chips.</p> 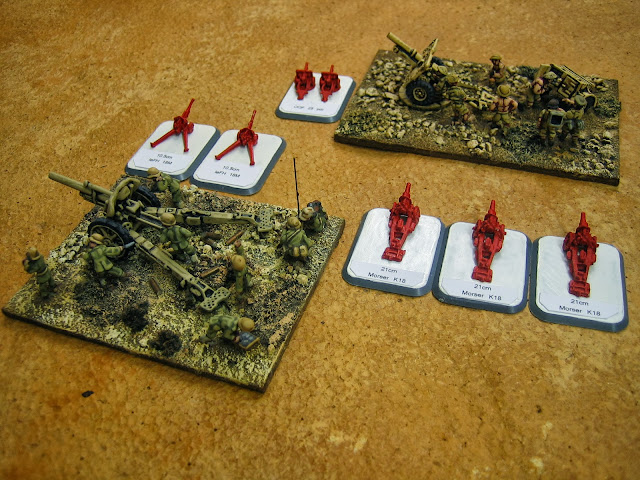