It’s now 12 May 2011, five days from the last fight. True is still recovering from his gunshot wound, but the rest of the section is good to go and raring for a fight. This was actually a down day for the unit, pulling rear echelon duties around camp when a local source came in and reported the Taliban would soon be moving on Pasha Gal, the head of the local village of Khowt Gin. A UAV was dispatched to the area, but nothing out of the ordinary was noted. However, when another source came in and provided very similar information, suggesting the Taliban wished to convert the nominally neutral Pasha to their side or make an example of him, HQ decided to dispatch Corp and they boys to go and check it out.

The team mounted up in their armored troop carriers (sorry, I don’t recall what they are called and I’m too lazy to look it up right now) and headed out the 20-some odd kilometers to see what was up. About a klick out from Khowt Gin the vehicles laagered and the section dismounted, covering the rest of the distance on foot. 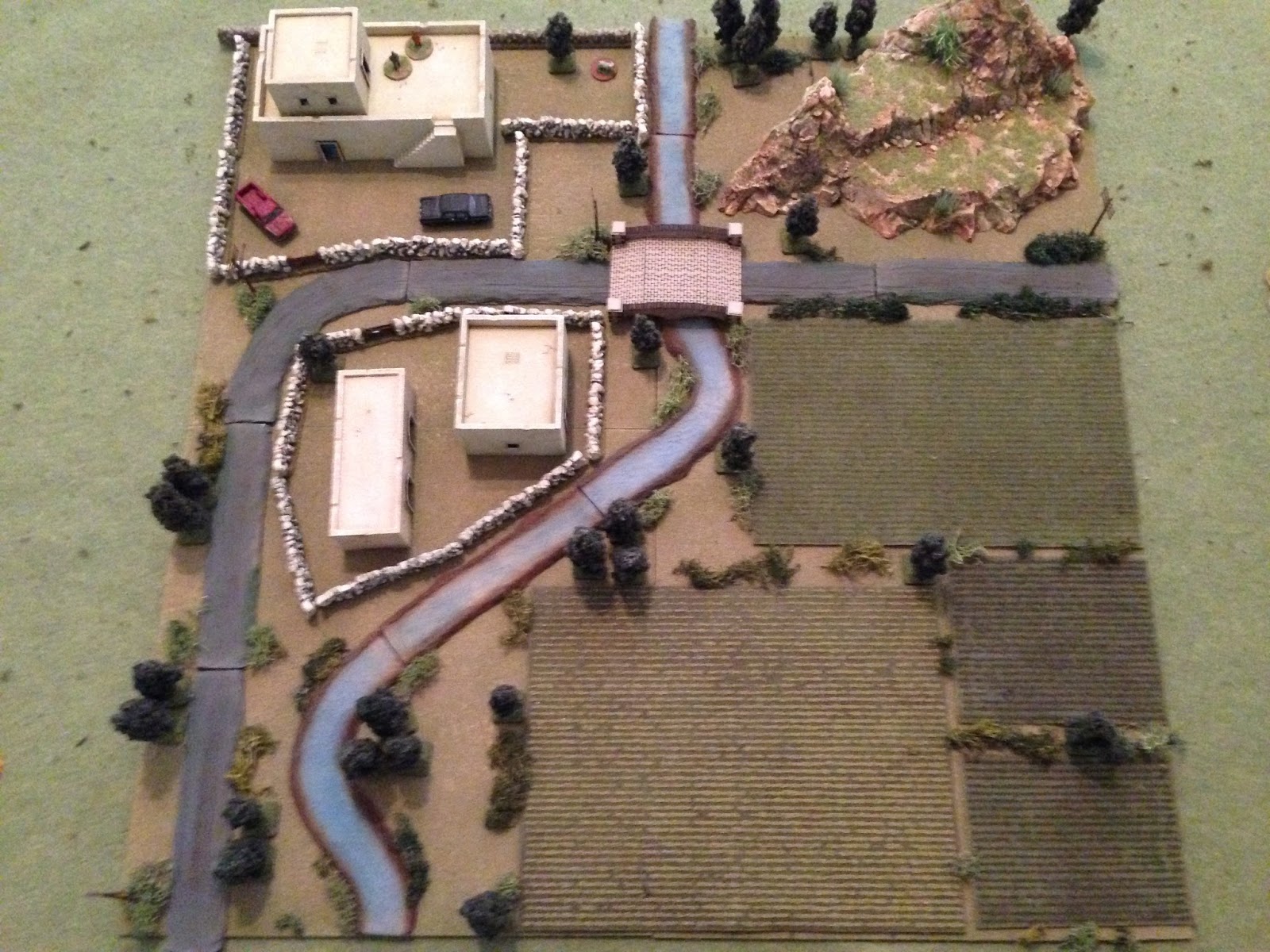 Overview, north is up. The village of Khowt Gin is at top left, with a craggy outrcop at top right and a river running roughly north south. The river can be forded anywhere along its length at a movement penalty. Again the walls are approximately four to five feet high, and the area is covered in crop fields, which the Royals will be coming across. The Pasha’s house is at top right; having heard of the coming trouble, the locals have fled the village except the Pasha and his wife, who have moved to the roof of their home to await their fate. And they have their trusty goat (provided by Kyote) near at hand.

To see how the fight turned out (and man, it was a doozy), please check the blog at:
http://blackhawkhet.blogspot.com/2016/07/royals-in-helmand-fight-3.html

No game today, my wife had plans. I did get a little painting done (still working on Jimmi’s fantastic ARVN rifle platoon), and I printed out THW’s “Hell Hath No Fury,” so tomorrow I plan on at least playing some of that. I’m going to go with 6mm, but I don’t have any WWII stuff available right now, so I’m going to test it out with some modern stuff. I haven’t played them yet, but I like the rules so much I just placed an order for some WWII GHQ from Noble Knight Games.

My plan is for the boy and I to play coop against the AI (yeah, if you can’t beat’em, join’em). We’ll be a German tank platoon from 13th Panzer Division, starting off with Barbarossa and playing through the whole war on the Eastern Front.

As always, more to come.