AKA Operation Cro-Wings #3, AKA The Death of Team Three

It’s 1825 on 29 June 1990 and Team 3 of Lt Trojas’ ODA 626 is sitting atop Hill 825, and they’re in a bad way.  They had been performing surveillance, from Hill 781 to the northeast, on a nearby road networks, serving as a tripwire to warn TF Galban mechanized forces of enemy counterattack.  They spotted enemy armor moving in, reported it to TF HQ, and coordinated air strikes (some enemy forces still got through; that’s actually TF Aguilera fighting off the enemy counterattack near Pisa).

However, enemy radio direction finding efforts triangulated the team’s position and vectored Communist militia into the area.  Team 3 was able to get the drop on the bad guys, but there were simply too many, and so the Cubans abandoned their positions and moved to Hill 850 in a running firefight.  The team suffered one man seriously wounded and three lightly wounded.

Upon reaching the crest of Hill 850 the team made comms with TF HQ.  They were informed Battlegroup Elias was standing by as QRF to get them out, but the team needed to continue moving southeast to Hill 825, with a Helicopter Landing Zone (HLZ) just east of it.  The radioman informed the team leader, GySgt “Turk” Dos Santos of this development.  “Uhh, fellas, I got bad news.”  Everyone turned to look as Turk showed them the problem: the team’s back was to a 30 foot cliff; with enemy troops coming from the north, northeast, and southwest, the only avenue of escape was down the cliff, across a draw, and up Hill 825 to the southeast.

Turk led Team 3 down the cliff and up the slope of Hill 815.  The fighting was ferocious, and while the Communists were dropping like flies, Team 3 reached the crest with three seriously wounded men and two lightly wounded.  But tragedy struck as Turk radioed for extraction; a Cuban CH-47 carrying five crewmen and 18 soldiers from Battlegroup Elias swooped into the valley between Hill 850 and Hill 815.  Turk had just established communications with the pilot when a rocket streaked up from Hill 850; the Cuban helicopter was struck and fell at the foot of Hill 850, with no survivors.

Turk informed TF Galban headquarters, which ordered the recon team to descend Hill 815 to the south, heading for the Cronistrian town of Tulm, where a convoy from Battlegroup Elias was currently moving to effect extraction.  Turk looked at his team, half of whom could not even walk, and got them ready to move. 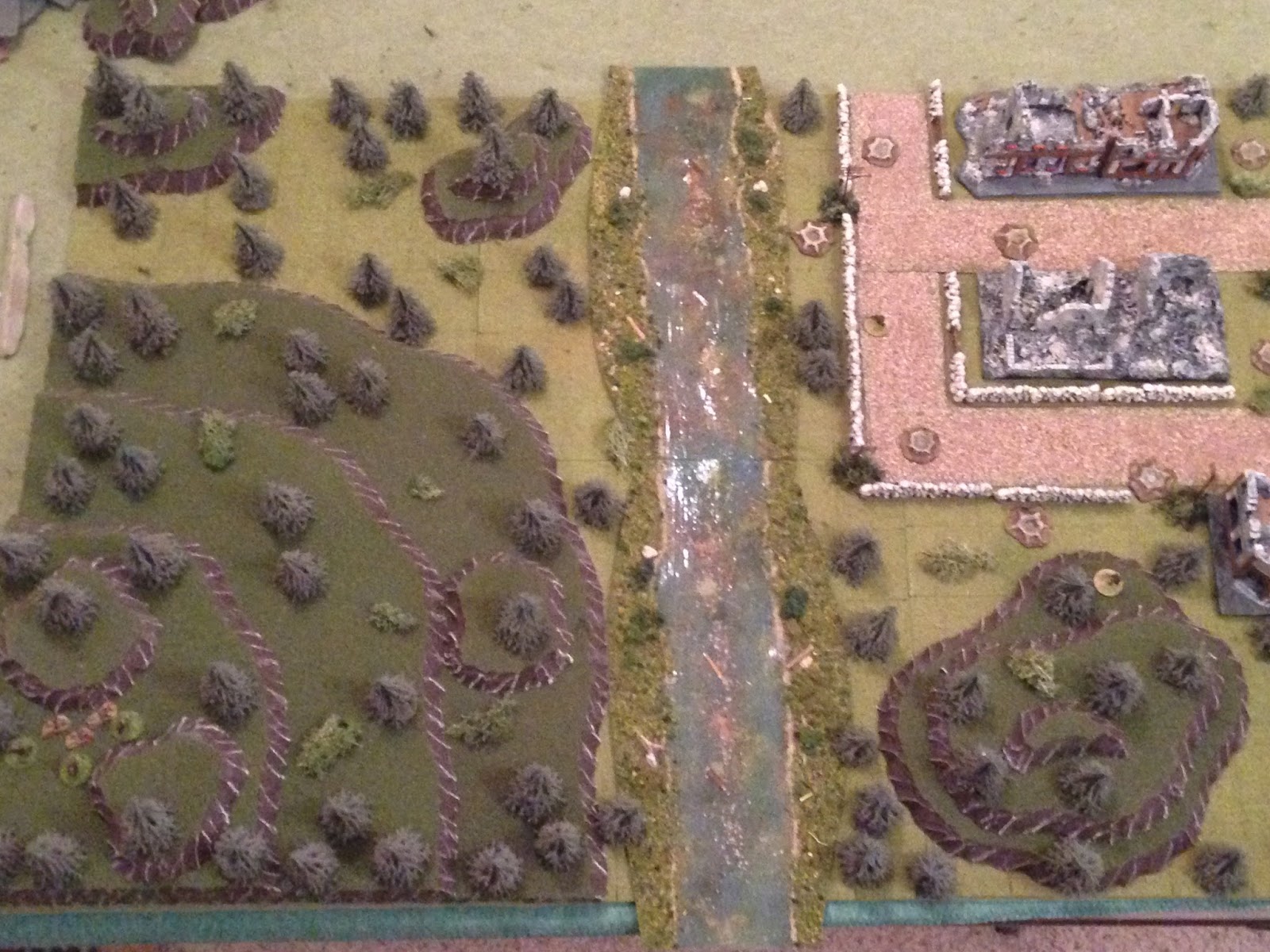 Overview of map, north is left.  Hill 815 is at bottom left (northwest), Tulm is at top right (southeast).  There is a shallow stream running east-west at the center of the table.  Hill 535 is at bottom right, and the foot of Hill 618 is at top left.  The team is atop Hill 815; they have to make their way down-slope, cross the stream, then get into Tulm, where (hopefully) units from Battlegroup Elias will be waiting to pick them up. 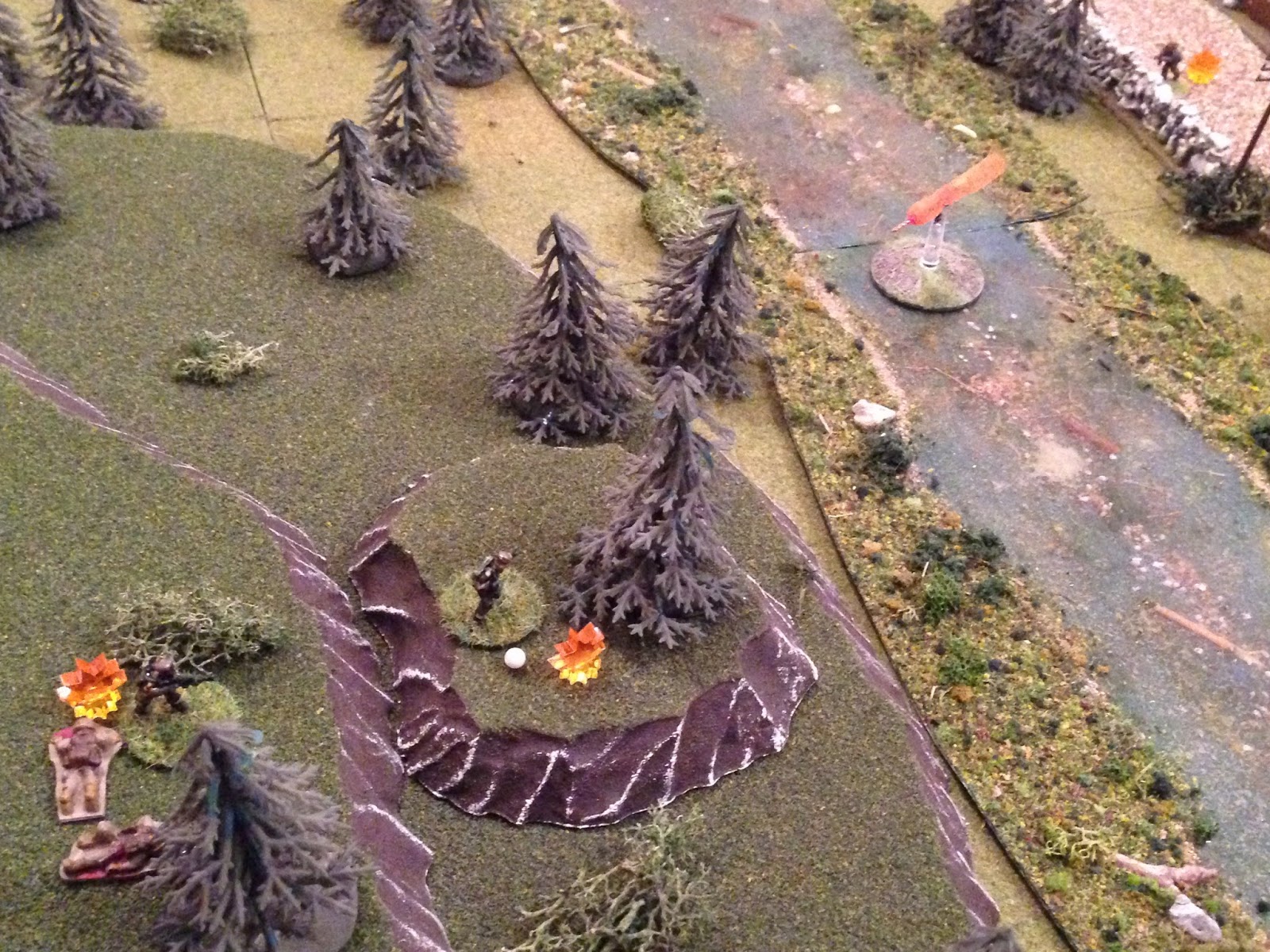 Turk and Chick taking fire.  Almost to the stream, but enemy troops in Tulm and no sight of Battlegroup Elias.  To see the bitter end, please check the blog at:
http://cubalibrewargame.blogspot.com/2016/12/cuba-libre-cronstria-fight-25.html

I hope you enjoyed Operation Chokehold (the 6mm fights) and Operation Cro-Wings, even though it wasn’t exactly a Hallmark ending.