AKA The reduction of Dubrovna, Fight #3

It’s 1010 on 1 July 1990 and Battlegroup Elias has two rifle platoons on Hill 489, where the enemy is routing down the backside, attempting to flee into the town of Dubrovna, where their commander hopes to rally them and re-establish defensive positions.  1st Platoon rolled down the highway towards Dubrovna, covered by AMX-10RCs of Battlegroup Elias, then de-bussed near an enemy strongpoint.  The Communist position was key to both sides; a machine gun in an old, bombed out house was keeping Battlegroup Elias at bay, holding the door open for their comrades to escape the carnage of Hill 489, where 2nd and 3rd Platoons quickly broke their defensive line.  1st Platoon was tasked with eliminating the enemy machine gun position, then driving north to cut off the enemy’s retreat. 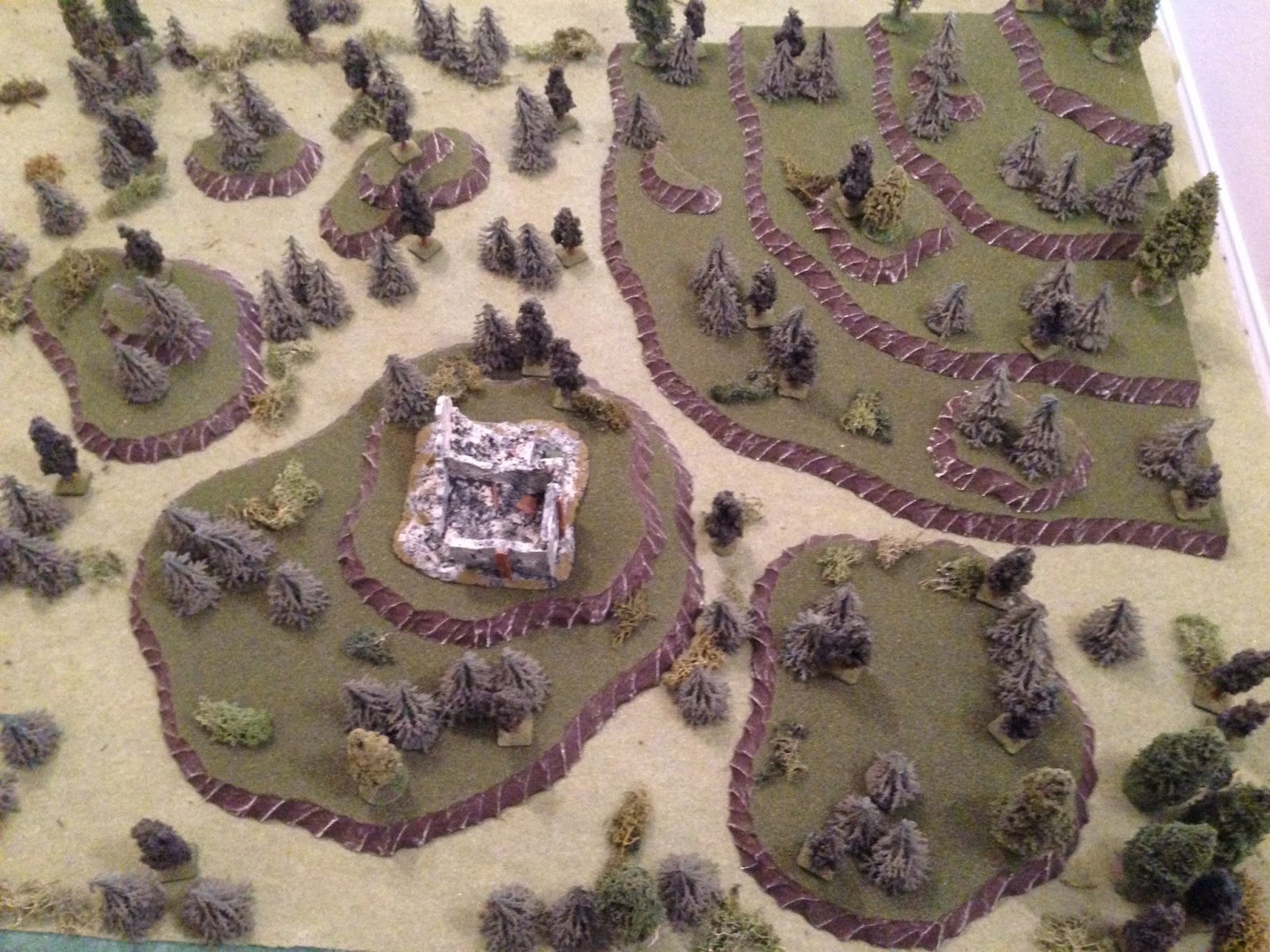 Overview, north is up.  The enemy strongpoint, a bombed out house, is at center, and Hill 489 is at top right.  It will not be pictured (sorry, I should have put some minis up there as decoration), but enemy troops are streaming down from Hill 489 off the map, from top right to left, while an enemy MG in the strongpoint is firing to cover their exit.  The Cuban 1st Platoon’s 3rd Squad will enter from the bottom (south) and is tasked with taking the strongpoint, then the other two squads will push past to the north (top) to cut off the enemy escape route. Cubans move on the Communist strongpoint, hoping to seize the day.  To see how the fight turned out, please check the blog at:
http://cubalibrewargame.blogspot.com/2017/01/cuba-libre-cronstria-fight-28.html

The squad consolidated its position in the objective house while Cpl Lupe sets the SAW into position facing northeast, the other two on policing up their casualties (1 KIA and 2 WIA, Pvt Salazar was knocked down but okay), then pops a green star cluster to signal the objective is taken.  The other two squads immediately begin streaming past the objective house, setting up blocking positions to bag the enemy troops still streaming down Hill 489, attempting to escape 2nd and 3rd Platoons, now on line and moving down the crest.

Battlegroup Elias now has all three rifle platoons engaged, though they are reaping a considerable harvest of wounded and de-motivated Communist troops, men now caught between hostile forces and only too happy to capitulate.  Captain Elias raises TF Galban HQ on the radio and provides a SITREP, and requests reinforcement; all these enemy prisoners (more than 400 as of 1630 local time) are eating up resources, and Battlegroup Elias is unable to enter Dubrovna.  A plan is devised: Battlegroup Elias will go firm, isolating Dubrovna from the east/northeast (while Cronistrian Democrat forces push from the west/southwest), while HQ and Support elements are stripped for bodies and pushed forward to come take care of Battlegroup Elias’ enemy prisoner problem.

Battlegroup Elias will resume combat operations tomorrow morning (2 July 1990), looking to enter and finish off Dubrovna.  The entry op is the next fight, coming right up.