AKA The reduction of Dubrovna, Fight #4

It’s 0630 on 2 July 1990 and Battlegroup Elias is again moving up to its jump-off positions.  Yesterday saw the Cubans attack a strong defensive position, Hill 489, and defeat it in detail, causing approximately 75 enemy casualties and capturing approximately 400.  The Cubans had gotten extraordinarily lucky in that a patrol spotted a covered and concealed approach into the enemy line, which allowed its units to infiltrate and flank the enemy bunkers, which drove the numerically superior enemy force to flee headlong from the fight.  Cuban forces were able to circle around and block the route of escape, which is what allowed them to bag so many Communist troops (also keeping in mind that the enemy troops in and around the town of Dubrovna are already encircled and cut off from other Communist forces, so they’re morale wasn’t all it could be).

As Battlegroup Elias rest, refit, and reorganized, Cuban air and artillery pounded Dubrovna all through the night.  Rather than an all-out assault on Dubrovna, Captain Elias has elected to try to infiltrate his infantry on foot, behind a creeping barrage, and once the artillery has moved on and the troops are on the edge of town, the Battlegroup’s mortars will give the forward edge of town one more sharp, quick pounding before the grunts push forward. 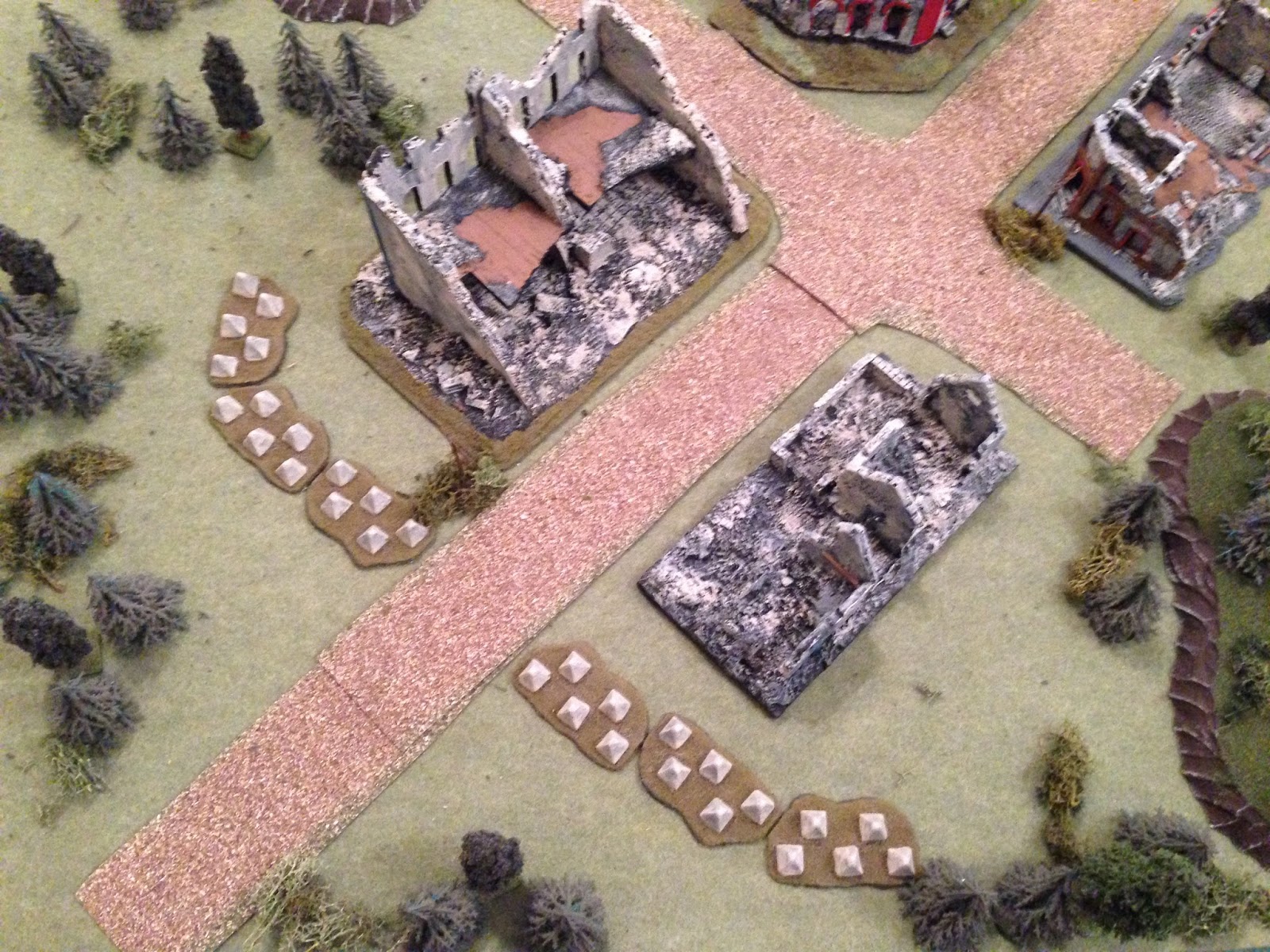 Overview of map, the outskirts of Dubrovna, north is bottom right.  The Communists are defending the buildings at center/top right and the Cubans enter from bottom left (east).  1st Platoon is in the lead, and 1st Squad the tip of the spear.  1st Squad’s mission is to secure the first four buildings at the town’ initial crossroads, opening the door for 2nd and 3rd Squads to pass through them, then 2nd Platoon to pass through 1st Platoon, moving into the town, proper. 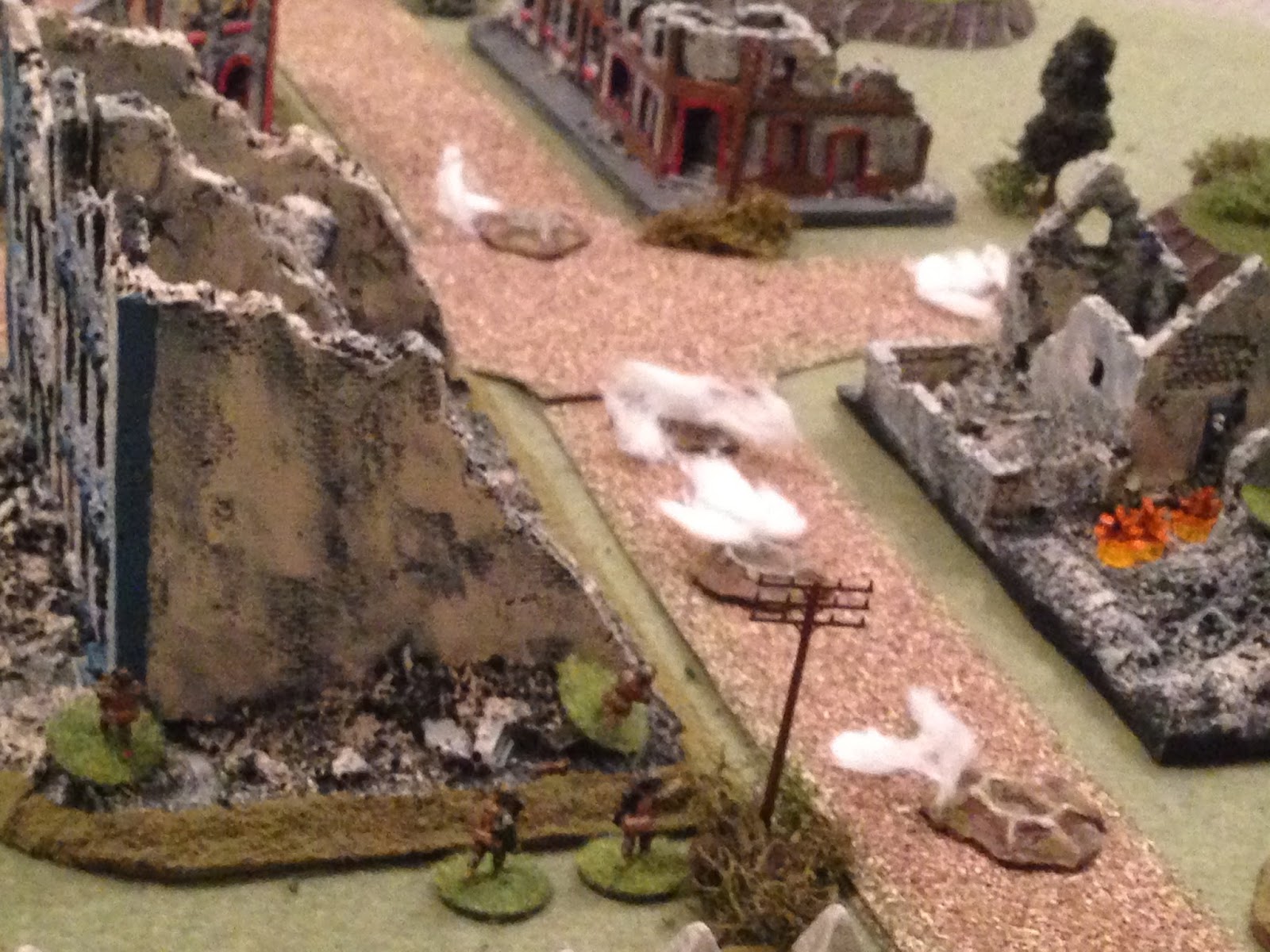 With smoke still rising from the craters left by the mortar barrage, Team 1 moves up through the Dragon’s Teeth to Building 2, laying down fire as they go.  To check out the whole fight, please check the blog at:
http://cubalibrewargame.blogspot.com/2017/01/cuba-libre-cronstria-fight-29.html

Mission accomplished, the squad consolidates, Team 1 in B3 and Team 2 in B4.  They take up defensive positions, redistribute ammo and water, and Cpl Lupe moves back to tag PFC Abrera’s body (1 KIA, enemy 6 KIA).  Cpl Lira calls in the pro-word for objective taken, and 2nd and 3rd Squads immediately go streaming past them to the west, securing the next to buildings without firing a shot.  2nd Platoon now passes through 1st Platoon, and they come smack up against Old Town, the original section of the town of Dubrovno, a sniper’s paradise of narrow, cobblestone streets surrounded by two story buildings with nooks and crannies everywhere.  Well, someone’s gotta clear that rat’s nest, looks like 2nd Squad, 2nd Platoon is up next.

Which, of course, is the next fight, and it’s an absolute mess!