It’s 0325 on 11 Jul 1990, and Unit 101 is in Lebanon, closing in on The Mayor in the village of Jezabyl.  The village is very small, and inhabited only by people that are well armed and loyal to The Mayor, and the tactical problem is that the platoon needs to take The Mayor alive.  Team 1 has busted down the door, and now it’s time for Team 2 to rush in and grab the target.  The sniper and MG teams are to the southwest, in position to isolate the enemy compound (keep reinforcements from getting in) and prevent escape (keep the target from getting out). 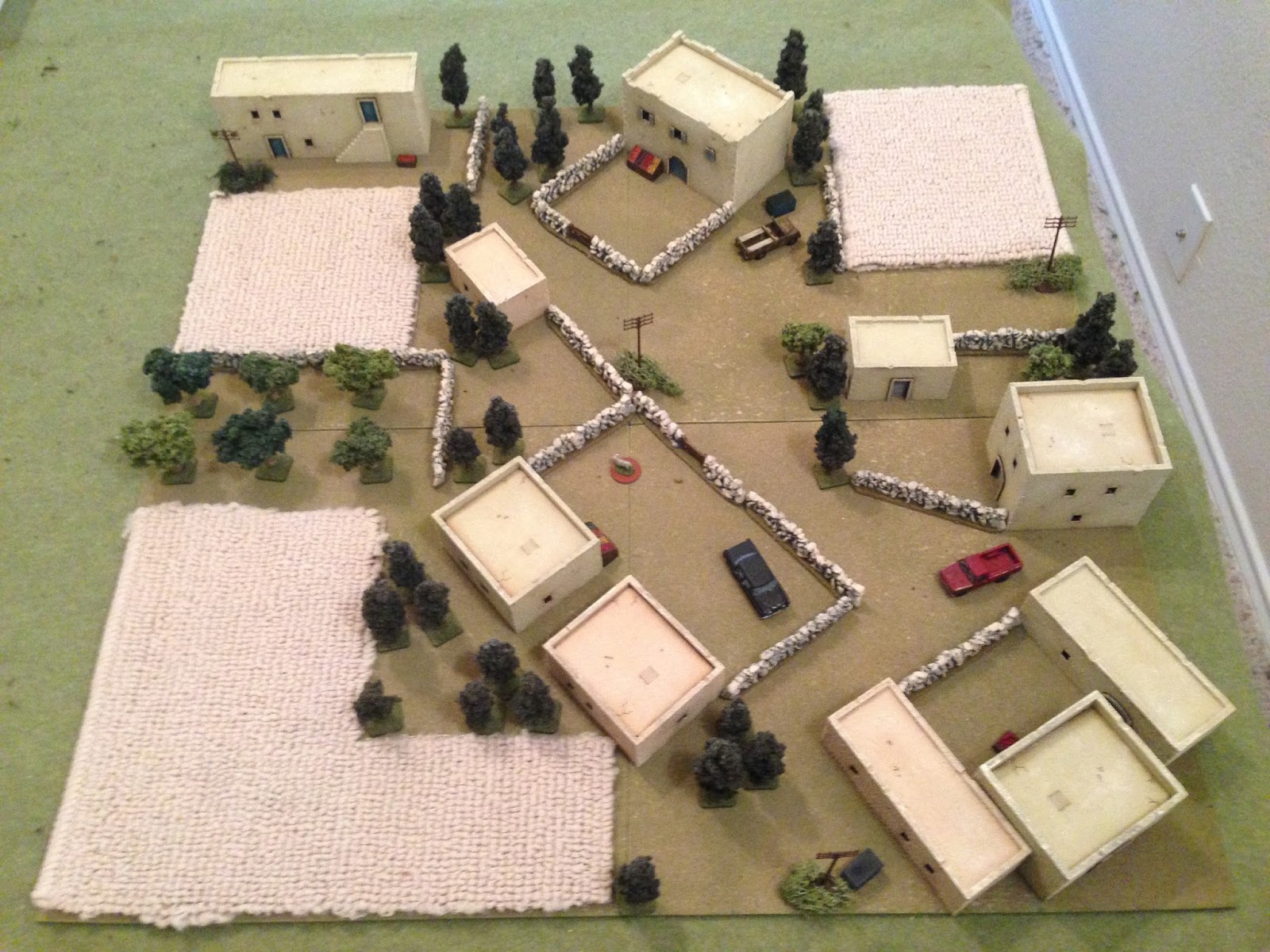 Overview, north is up.  The Cubans will enter the table from the east, via the lane between the crop field at top right and the wall/buildings below it.  The rest of the village, with the creek, is off camera to top right; that was the ingress where Team 1 fought the previous battle, and Team 2 has passed through them and is moving into The Mayor’s compound.  They don’t know which building The Mayor is in; the enemy has two squad leaders.  Once the fight begins, one of the squad leaders will move to The Mayor and attempt to evacuate him, while the other squad leader organizes a delaying action.  When it’s time have a bad guy squad leader move to the mayor, I’ll roll a dice to see which building he’s in, and the squad leader will have to move there, grab him, then lead The Mayor off the map.  The Cubans, of course, are trying to catch The Mayor alive.

I’m playing this solo, using Ben Lacy’s skirmish rules “Final Combat.”  These are super detailed, and you know I’m simple, so I’m using the activation system as written, and I’m using the movement, spotting, morale, casualty determination, and firing pretty much as written, though simplified just a hair.  This game was fun, and didn’t take as long as I thought it would, but was still longer than I generally am looking for.  I really like the activation system, so I’ll probably work to make shooting, spotting, morale, and casualty determination a little more simplified (keep the concepts, re-work to D100, which is really just a personal preference).  Oh, and I didn’t really mess with postures too much, everyone just kept moving forward.  Part of that was I don’t have figures to reflect the different postures (standing, kneeling, and prone) and I didn’t really want to use more markers for it, though I’m considering getting some more Peter Pig US Marines so I can do this.  The only problem is, I can’t find suitable bad guys where I can do the same thing (no one makes modern prone bad guys!). 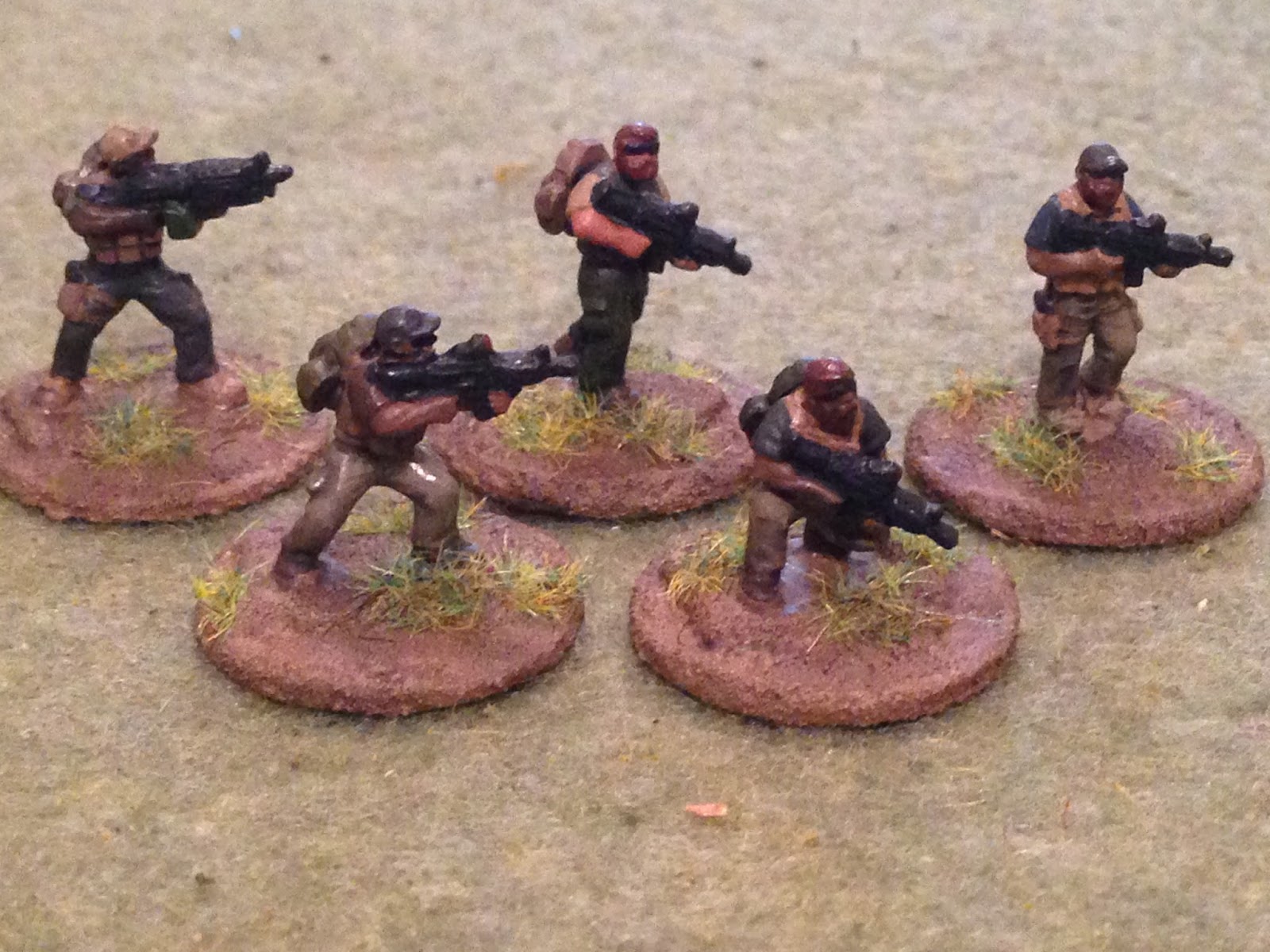 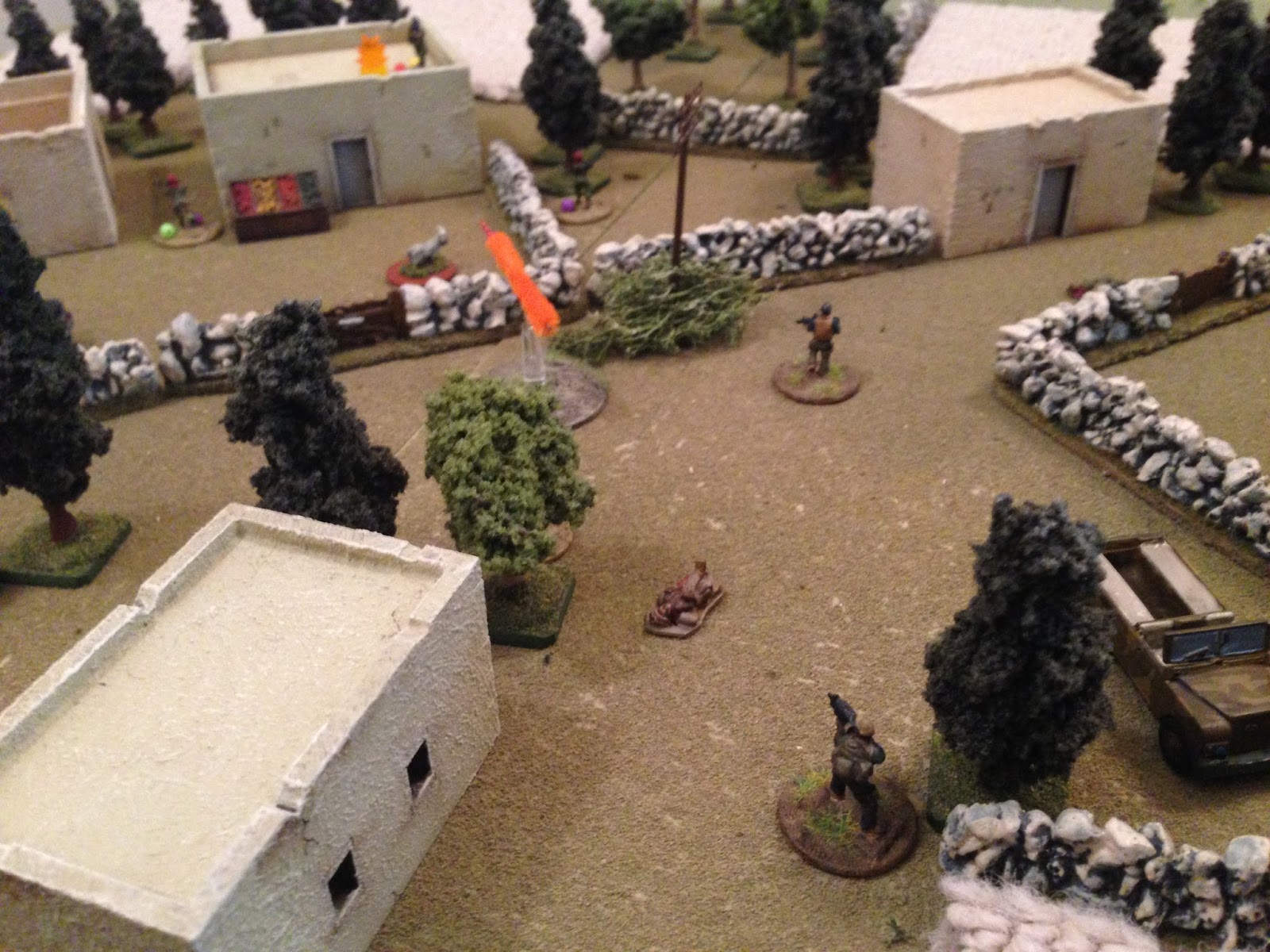 Trinity (bottom center) lays down covering fire with his Mk48 machine gun (scaring the hell out of the goat), while Major Villanueva (center right) dashes ahead, closing the distance to capture The Mayor (in building partly visible at top left).  To see the how the fight went, please check the blog at:
http://cubalibrewargame.blogspot.com/2017/02/operation-dragon-forge-fight-6.html

The fight was fun, and tense, though it’s still taking me a long time, about two and a half hours.  I’m pretty comfortable with the flow now, though I’ve gotten away from looking up the firing and spotting modifiers each time and just kind of laying odds (percentages) and rolling under on 2D10 to see if it worked or not.

It doesn’t really matter for the game I guess, but it’s kind of fun knowing where rounds hit a guy.  Actually, it does matter when the target is obscured by cover that can stop a round, and for body armor, but in the overall scheme of things you’re really looking to see how much damage the round(s) did to the guy.  That is, he can be hit in the hand, but bad enough that it puts him out of the fight.

I believe I’m going to handle wounded in the future the way I did the Cubans here, which is just throw down casualty figures, rather than track a bunch of wounded guys crawling to get off the map.  And don’t misunderstand, that’s only for the guys wounded so bad they can’t continue the fight; there will still be guys that get hit but remain in the fight.

It’s pretty cool having a few guys take on so many bad guys and 1) having a tense game, 2) a chance to win, 3) without it just seeming like a die-rolling exercise.  I did use the term ‘TQ5 superhero’ in my writeup, but I just meant that in terms of Major V being an incredibly highly trained and highly experienced operator, not that the rules made him untouchable.  Though you do need to make sure you don’t have too many TQ5s, unless you have two guys and a hundred bad guys.  Like “Strike Back” 😉