Reply To: War of succession of England

That’s about right. For the most part, we don’t know, and I am fairly confident in saying that there was no characteristic design for each group that you cite. Instead, I can easily see smaller groupings (ship crews, etc.) having their own patterns and colours as I mentioned before. In some respects, you might be as well looking at what re-enactors do for inspiration in painting figures.

The only examples of decoration that spring gazelle-like to mind are from Sweden: 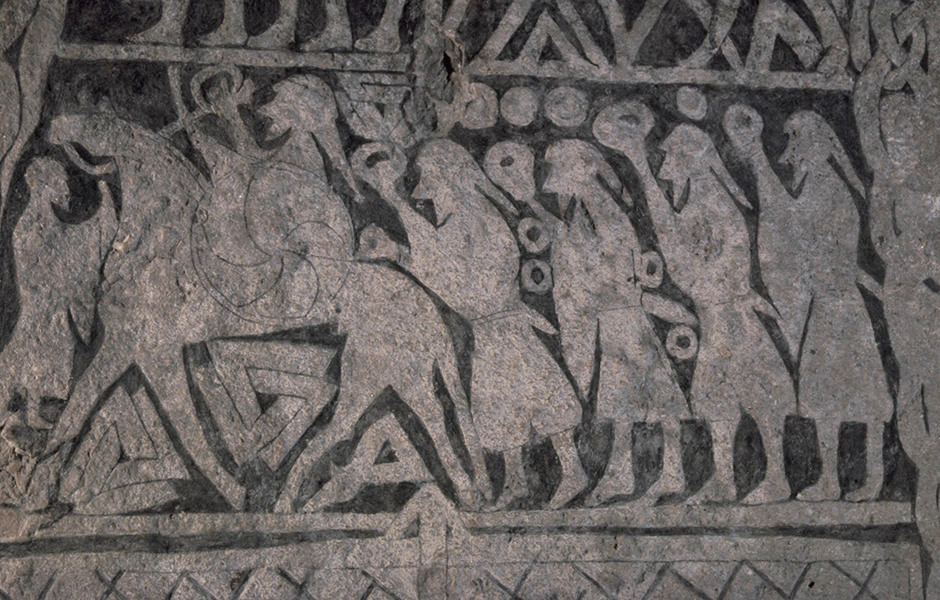 There’s another like this from the same place with the swirl pattern on it. I’m assuming it is decoration on the shield, but there is always the danger that the carver was trying to depict something else instead.

The Gokstad ship shields were in plain yellow and plain black, so some shields were clearly painted in plain colours, while a (presumed) shield from Grimstrup in Denmark has an interlace design in dark blue and grey-green with white and red detail. A Viking- Age shield from Valsgärde appears to have been painted red, while scraps of material from Ballateare have been interpreted as the leather facing of a 10th-century shield painted with a white background, black line decoration and red dots. It’s not a lot to go on.

Incidentally, I found mention of a late 11th-century kite shield from Trondheim while checking a couple of things. I’m not sure how late that is because I did not have access to the excavation report, but it does show that kite shields were around in Norway in the second half of the 11th century.

I don’t doubt that some manuscript images might show shield designs, so it could be worthwhile checking out eleventh-century English manuscripts for images to see what scribes thought Anglo-Saxon shields looked like around 1066.

Never argue with an idiot. They'll only drag you down to their level and beat you with experience.