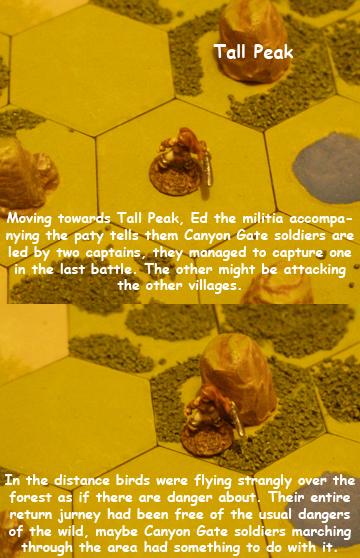 Weird that I rolled nothing for random encounter ever since leaving Canyon Gate. Also rolled no enemy action (1-10) on a D100 a lot.

I’m a little depressed my two favorite characters died. I rolled so many 1s, it wouldn’t have been so bad if my characters had any rerolls on 1, they only had +1 . I still had hope rolling for injury after the fight they had a 50/50 chance of surviving but only Depp survived and to put salt on wound his injury roll was ‘stunned’. The most useless character has a knack for surviving.

Arian gained an advancement again. I decided to give her a trait ‘Hatred’ for loosing her friend.

It should have said

This session broke my heart, I had so much planned for Depp, Erska and Jones in the follow up campaign. I Shouldn’t have made plans before the campaign ended. Arian made a new friend but I’m not too optimistic she’ll make it back to Short Peak.

A few lucky rolls interrogating the brigand, getting Canyon Gate off Peaker’s back and a looming war for an adventure seed.

I really was thinking of making Depp the main star of the next campaign. Ironic and a little poetic he died fighting in the village that kick him out.