The RDF dismount and half the team enter the Ice Station. Leaving Gomez, Woods, Ritter, Clyde, Johanson and Maine. To check and secure the radar station. 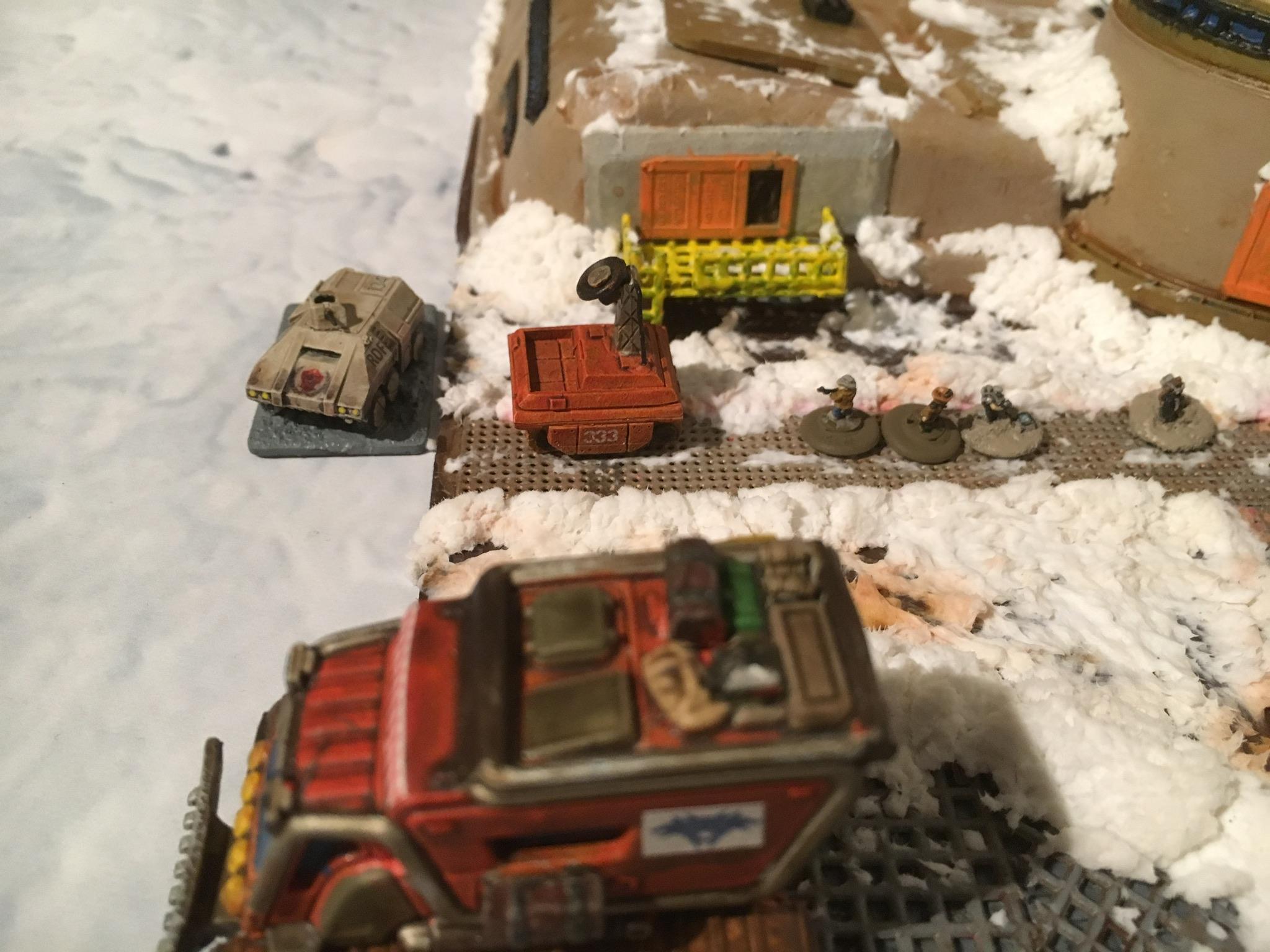 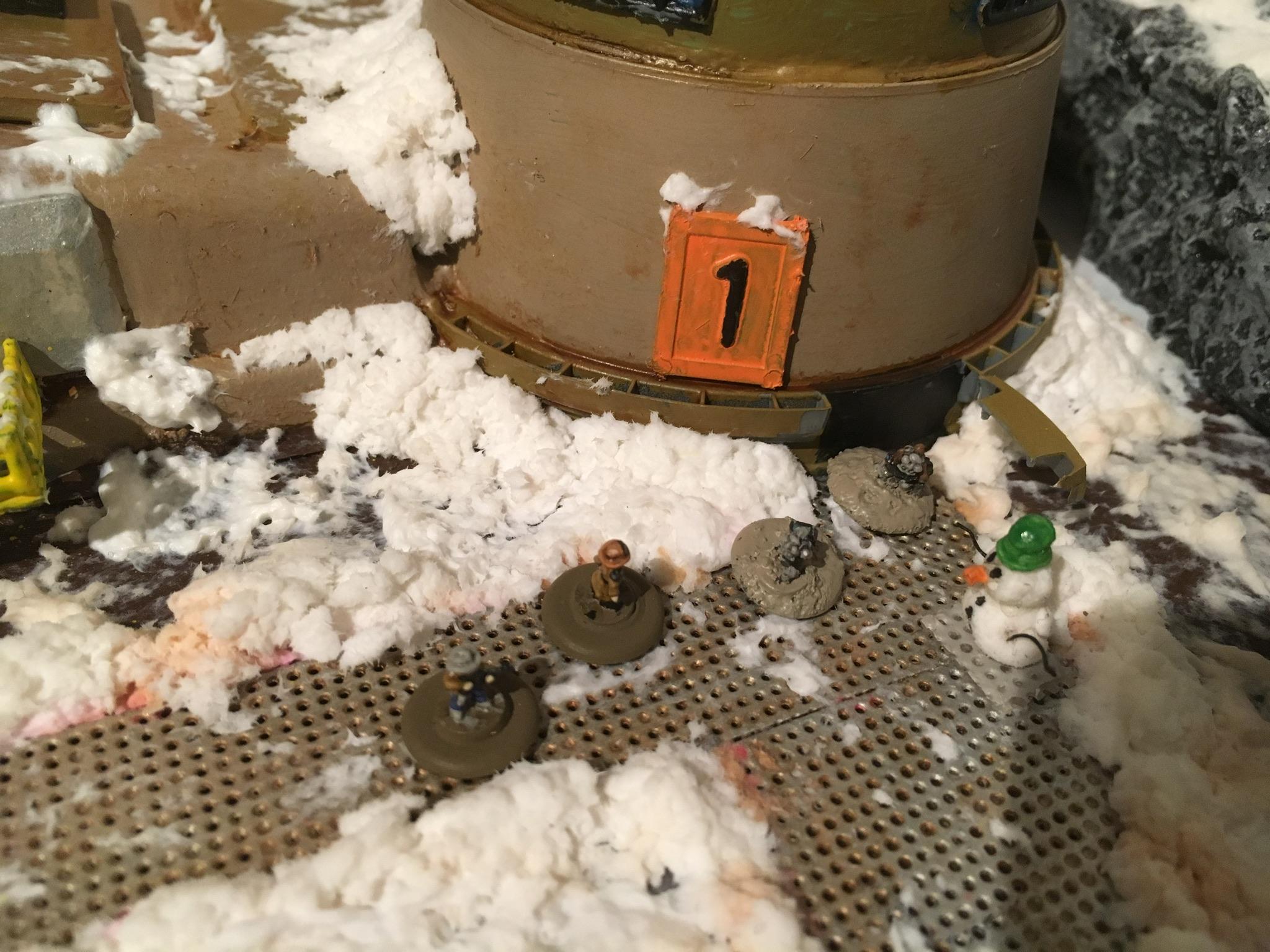 Johanson didn’t seem to concerned about what they were doing. An internal feud between, what he saw: other human organisations. Was of limited interest to him.
“Maine, you stay here with Johanson, near the Pathfinder”. Orders Clyde.
Maine looks at Johanson with terror.
“I’m not staying here with him. He’s dangerous” protests Maine. All he knows is that he was here as an sewage engineer to fix pipes.
“Look, he could have killed me and Colin. When he took our Pathfinder, but he didn’t. I think we can trust him”. Says Clyde.

The four RDF soldiers make their way to the radar compound. Ritter makes ready his minigun as he takes up the rear. Clyde checks the utility outhouse and finds Colonel Shields tied up. He looks a bit worse for wear.
“Sir! Are you ok” Says Clyde. Cutting his binds.
“Clyde, thank God. Captain Fouquet is Cerberus Corporation. We’ve been sold out. Trooper Peters and….and” the word seems to get stuck in the Colonel’s throat.
“and…..’him’…..are still out there” Says Shields.
“Major McCallum came in….are you receiving over” Says Clyde into his mic.
“It seems the comms are still down, no reply”. Says Woods.
“We need to get to the C&C” Says Clyde. 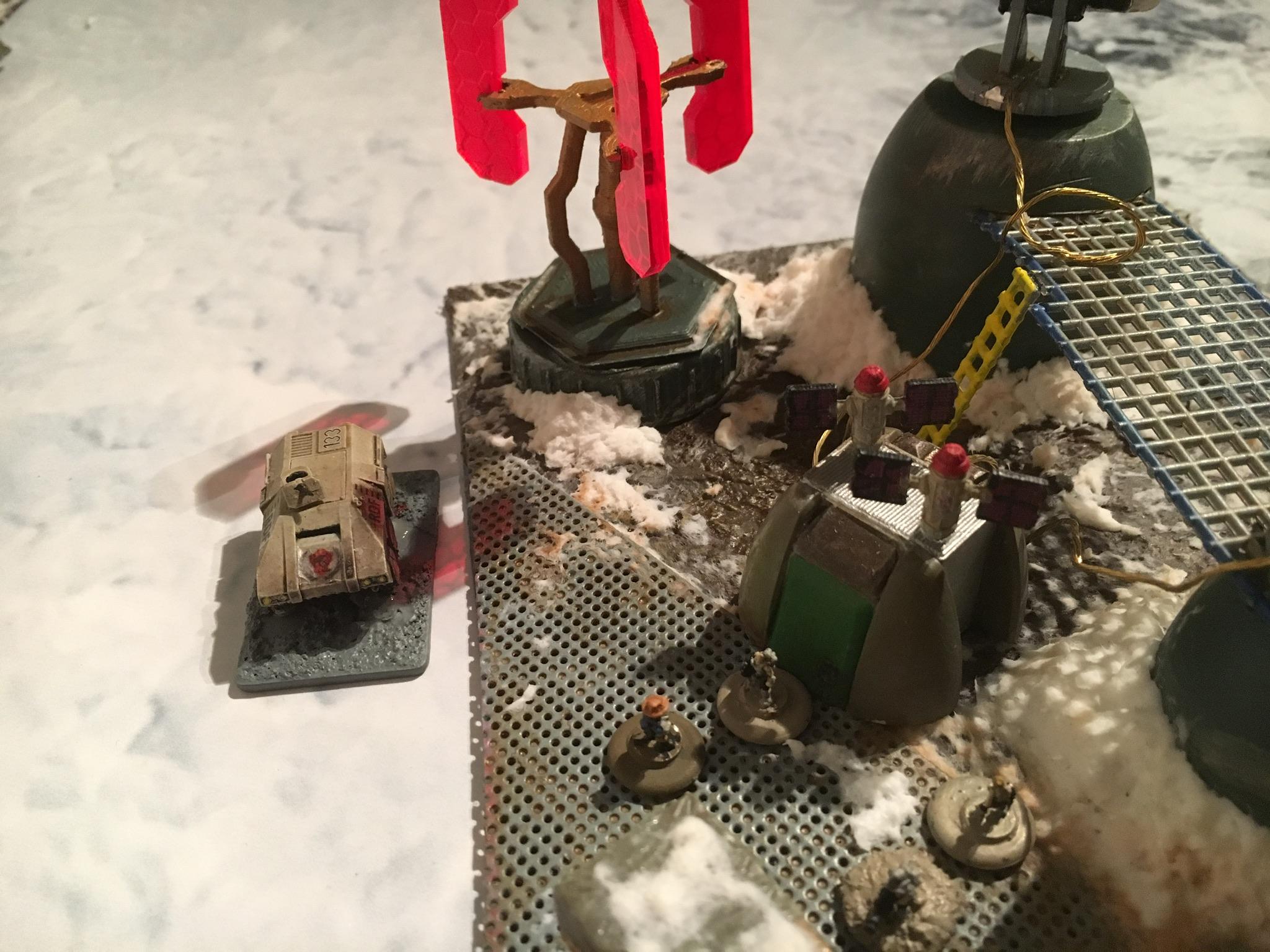 Then Gomez sees something moving. She looks again and realises its a RDF HARD suit! Before she had time to warn the others it opens up. MG fire strifes the area. Shields hits the floor of the utility shed as rounds bounce and wiz all around.
“It’s him….it’s him….” he shouts.
Ritter opens up with his minigun then throws himself into cover as the HARD suit returns fire.
Then another HARD suit appears. Gomez fires hard from her SMG along with Woods as it runs dry. She reaches for another clip slapping it in hard.
“We aren’t going to make a dent with these” she says.
She looks at the second HARD suit. This isn’t good she thinks and wonders why it’s not attacking. 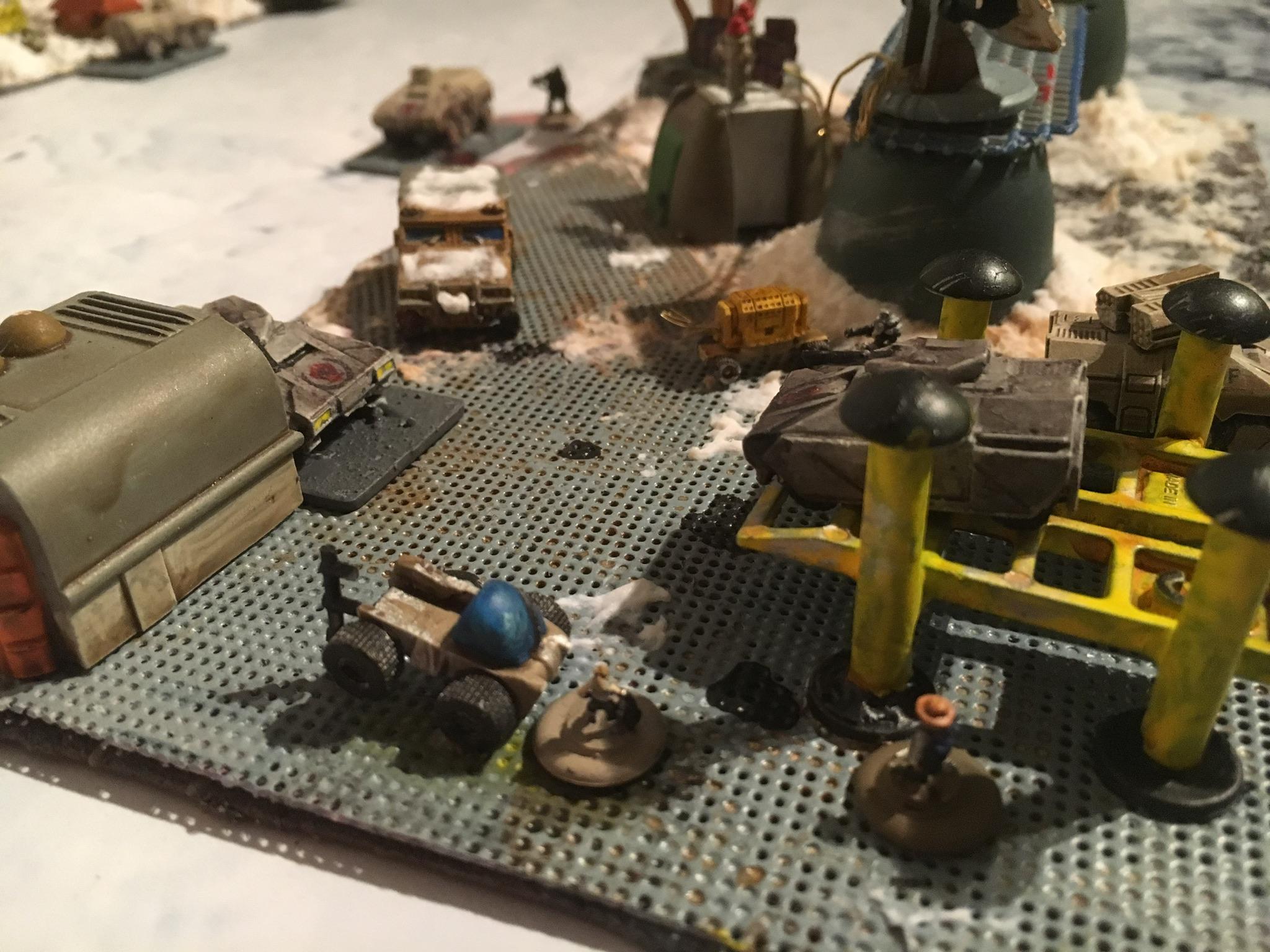 Peters looks at his HUD. He could easily kill two of the RDF. But this isn’t what he signed up for. He powers down the suit and waves his arms in the air.
“I surrender…….I surrender!” He shouts.
The gesture has not gone unnoticed by The RDF Trooper. He growls and rants inside the suit. That useless yellow belly Peters, he thinks to himself.
He powers up one of the suits rockets and fires. Peters was about to exit the suit when the HE rocket hit. He died instantly as the suit nearly got ripped in half by the explosion. The RDF Trooper smiles to himself
“If you want a job doing properly, do it bloody well yourself.” 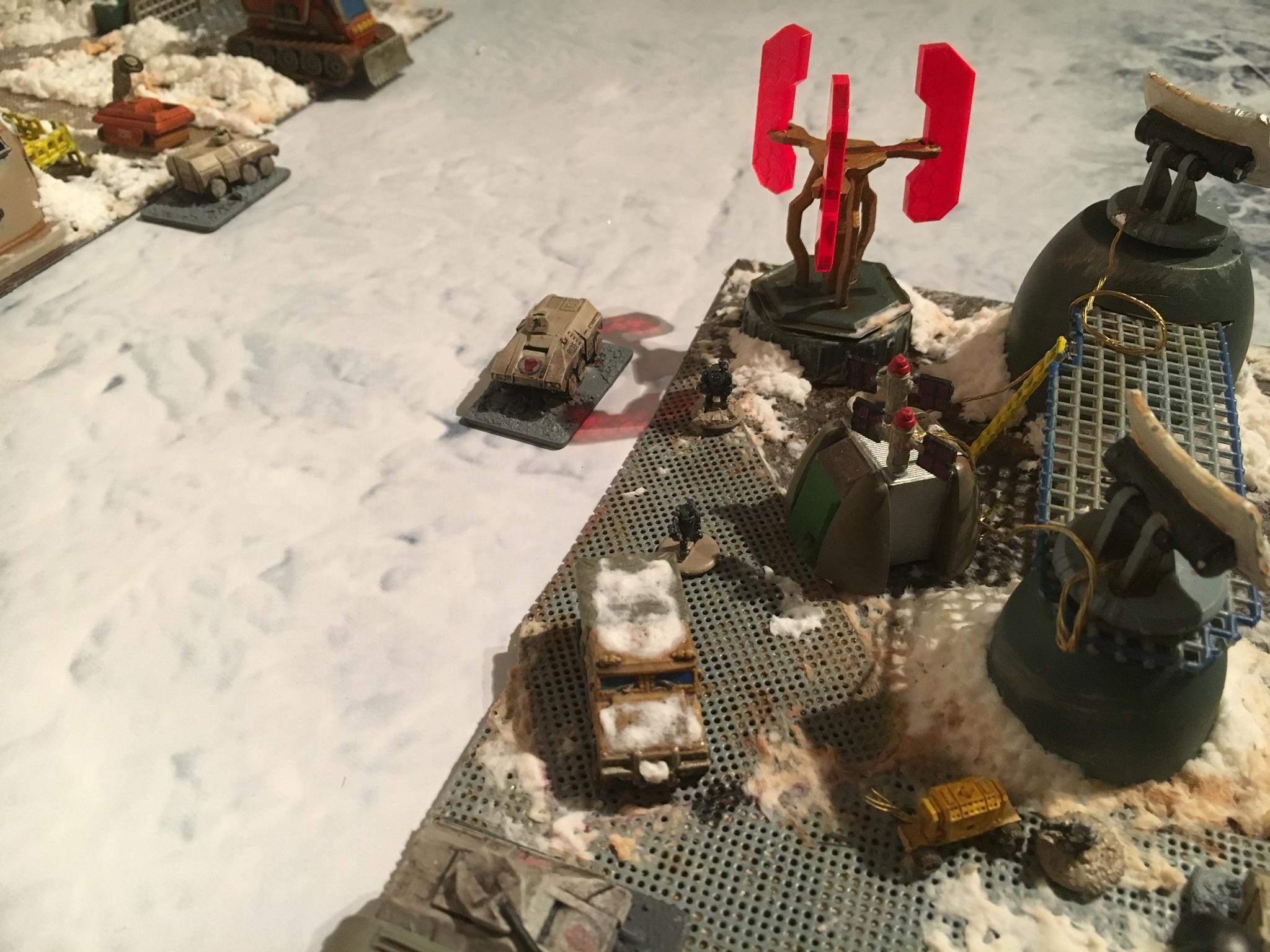 Meanwhile……Maine who was sat in the back of the Pathfinder. Was watching all this through the viewfinder.
“We need to help them” He says, turning to Johanson but only seeing an empty Pathfinder.
He shrugs to himself as he climbs up into the small GMG turret and looks over the controls for the weapon. He didn’t really know what he was doing. He was always good at engineering things but not this. He swings the turret around and lines up the sights and fires at the HARD suit. The first shot goes wide and lands harmlessly in the snow. Then he fires again, this time taking out one of the inferred heat panels.
The RDF Trooper turns his suit around, now realising he is being fired at by the Pathfinder. He powers up the second rocket and fires!