It’s 0730 on 27 July 1990 and Operation Geronimo has kicked off. The parachute landing went smoothly and Lt Espinale’s E Co, 6th Para, AKA Task Force Hawk, quickly formed up and began pushing east, clearing the area of enemy forces and moving to blocking positions to screen the amphibious landings scheduled for later this morning. An hour ago the TF Hawk commander, Lt Espinale, ran into enemy forces, insurgents of the Free Leon Army (FLA). The Cubans suffered two very serious casualties, but killed six FLA soldiers, captured one, and destroyed a Technical, thus opening the route east.

TF Hawk continues towards its blocking positions when the point man calls a halt; they’d come to their next objective, so the troops posted 360 degree security while the leaders huddled up. Just south of the road was a farm that needs to be cleared, but you can’t clear the farm without first clearing the high ground to northeast of the farm. Lt Espinale’s group would hold place in support while Lt Candelario led his group to the north to clear the high ground (this fight). Once the high ground is secured, Lt Gonzalez’ group will take the farm from the south (next fight). 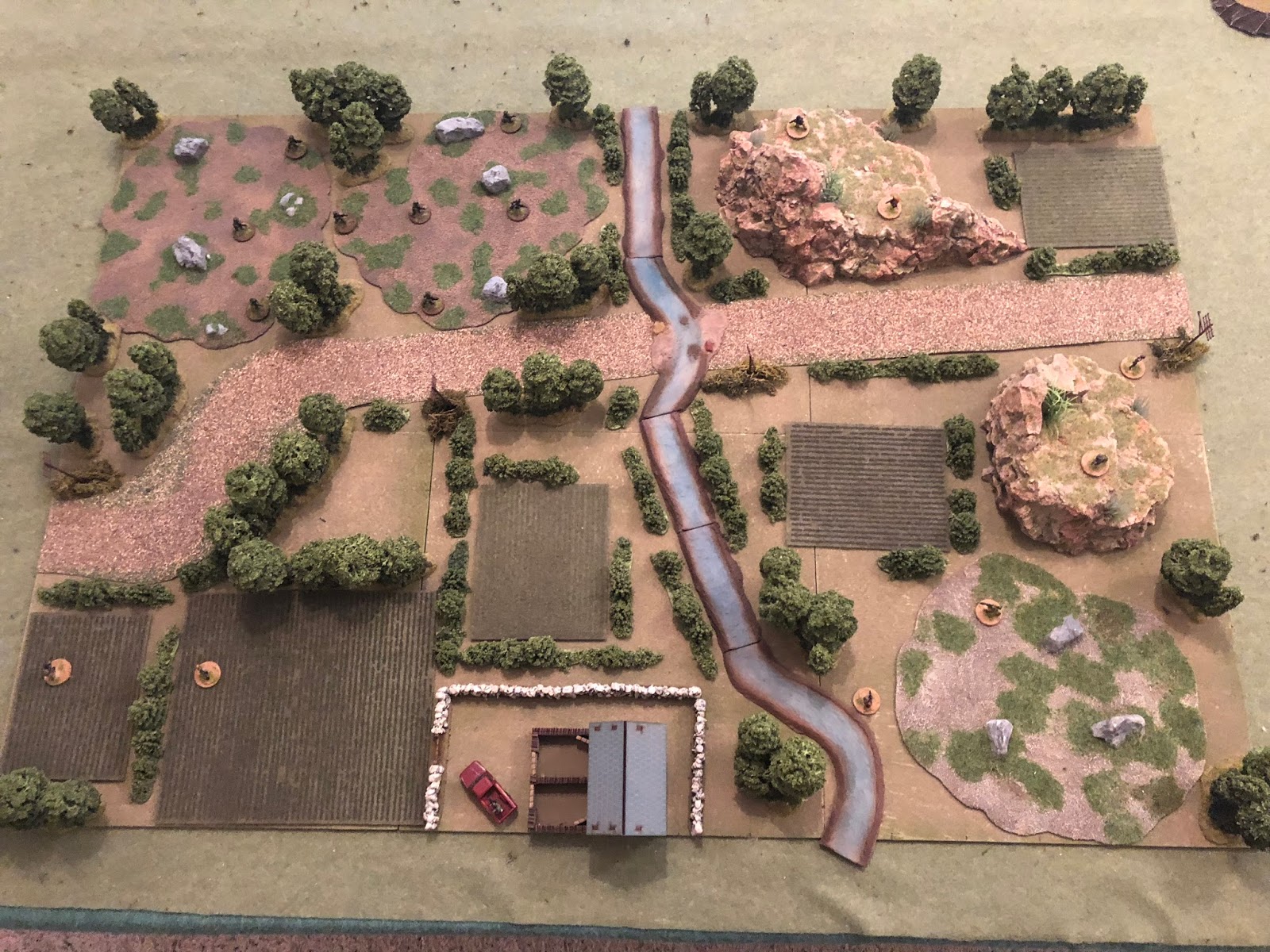 Overview, north is up. The northern edge of the farm is at bottom center, while just right of it is a canal running north-south. At top right and far right is the troublesome high ground Lt Candelario’s group must take. The dirt road runs from far left to top center right; there are a few cultivated fields throughout the area, as well as some boulder-strewn patches of rough ground, as well as a few stands of trees and plenty of bushes.

The Cubans are in two wedge formations (top center and top left), and again there are bad guys everywhere, a total of six riflemen, an RPG gunner, a Lieutenant, and a Technical. The riflemen are at:

-bottom left, where two of them are in the fields. Someone in the farm (bottom center) saw something and ordered some sentries out to check on things to the north
-bottom center right, just right of the canal and below a stand of three trees
-the RPG gunner is just right and above that guy
-at right, atop Point 2
-the enemy Lieutenant is just above and to the right of that guy
-two more riflemen are atop Point 1 at top center right
-the Technical is in the farm at bottom right. The Technical will not move, but it will engage the Cubans. The whole issue is that the Cubans need to clear Points 1 and 2 without becoming decisively engaged by enemy troops in/around the farm, which will be assaulted from the south by Lt Gonzalez’ troops once Points 1 and 2 are secured. 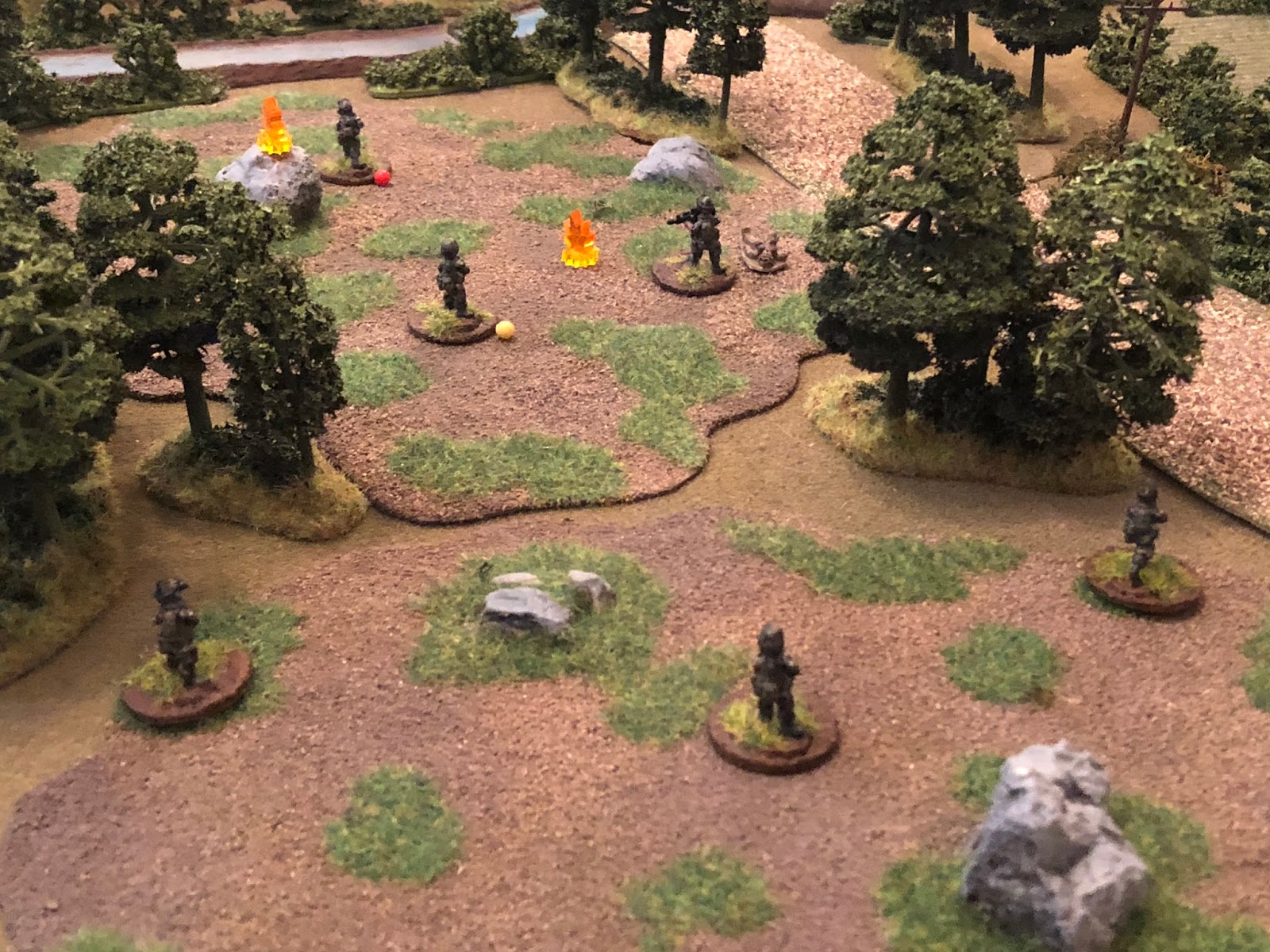 The Cubans are pushing forward under heavy fire… 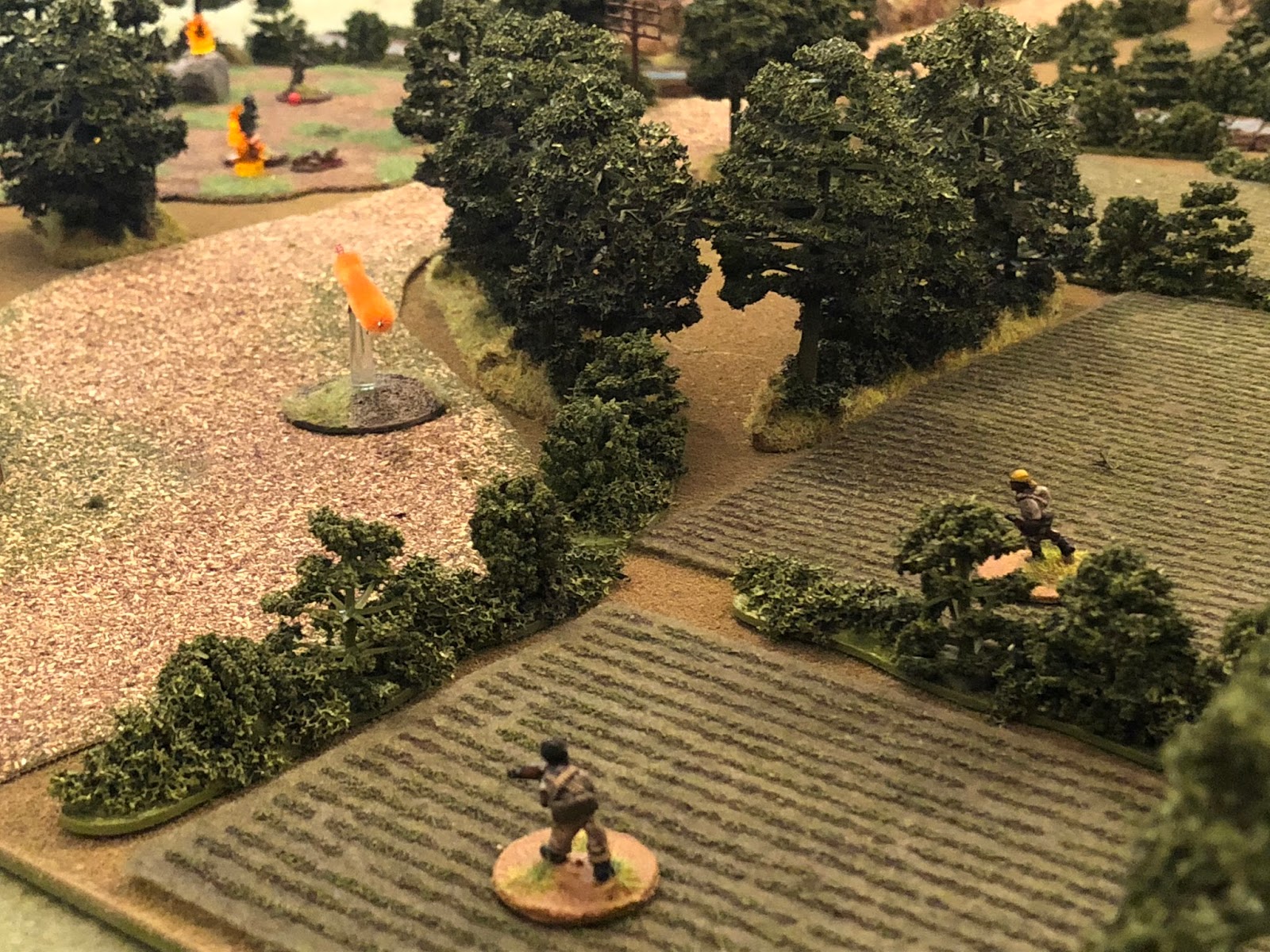 But bad guys (bottom center and right) have crept in behind them (top left) and are opening fire, plus the Technical (off camera to right) is hammering away with its heavy machine gun. It’s gonna be a long day… To see how it started, please check the blog at:
http://cubalibrewargame.blogspot.com/2018/02/operation-geronimo-2.html