The Hades walker came into range and as expected the RDF comms were jammed. The two PHR operators looked over their screens and were first to take the initiative. They detected Woods’s drone and powered up the main tail weapon and fired! 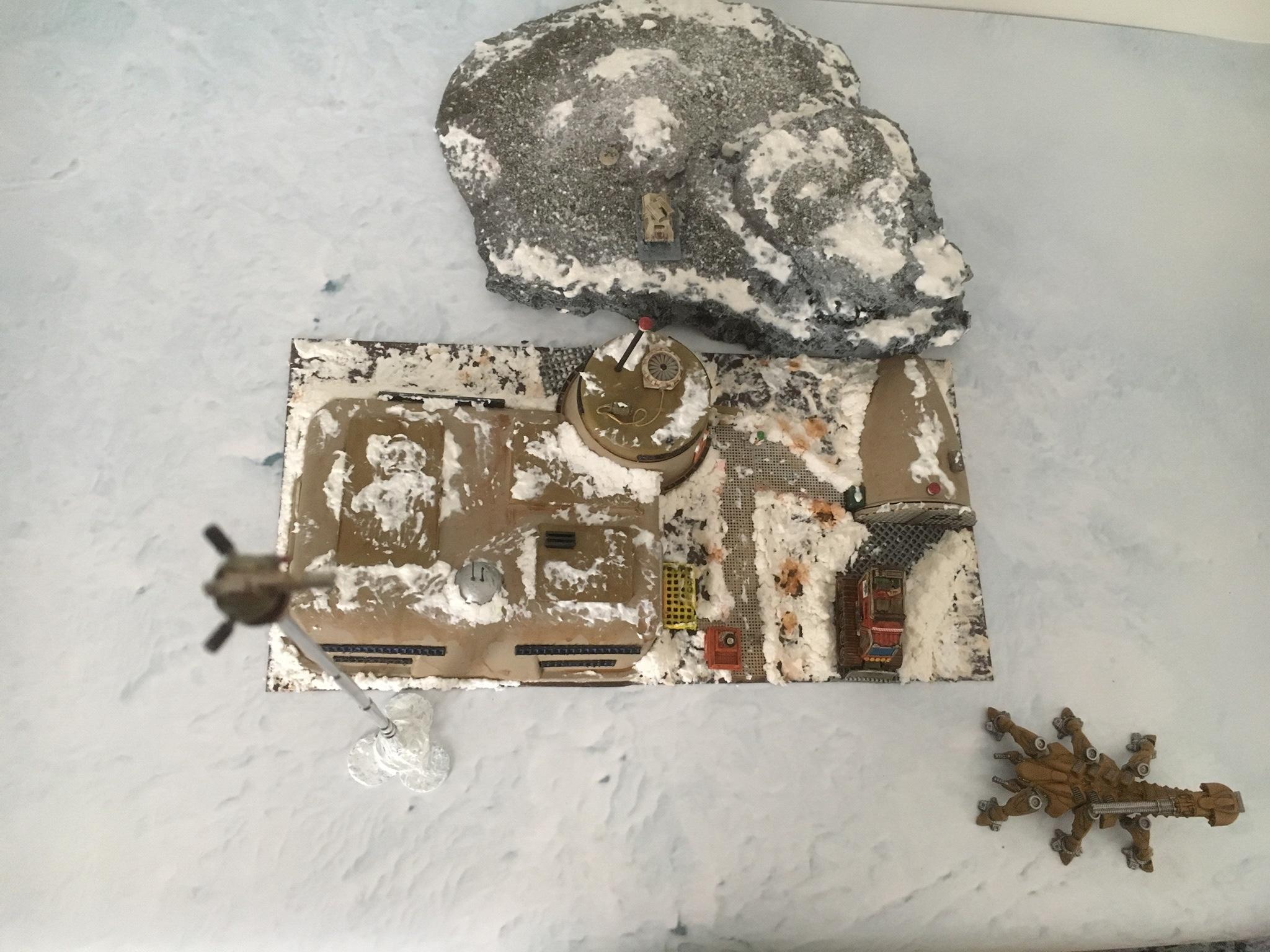 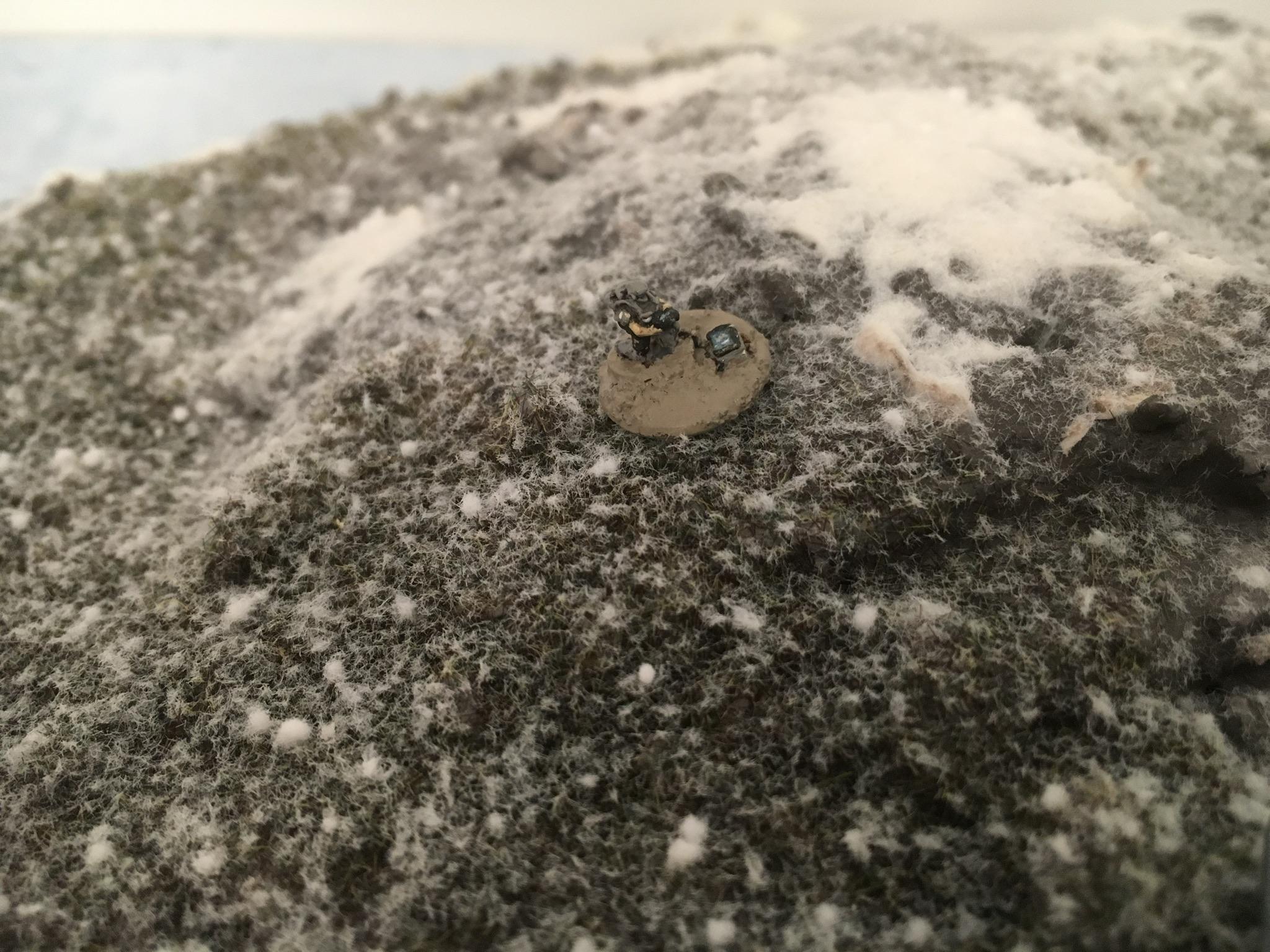 Before Woods had a chance to do anything his first Gydran drone was vaporised. Shields was quick to take advantage of the distraction and fired a full rocket salvo from the Archer. The accuracy was spot on and all missiles impacted on the walkers shields. Although there was no visible damage Shields knew that would of hurt their power levels.

“Gomez, get us back into cover. Let’s hope the others can cover us while we do a reload drill” Says Shields. Gomez nods and puts the Archer into reverse. 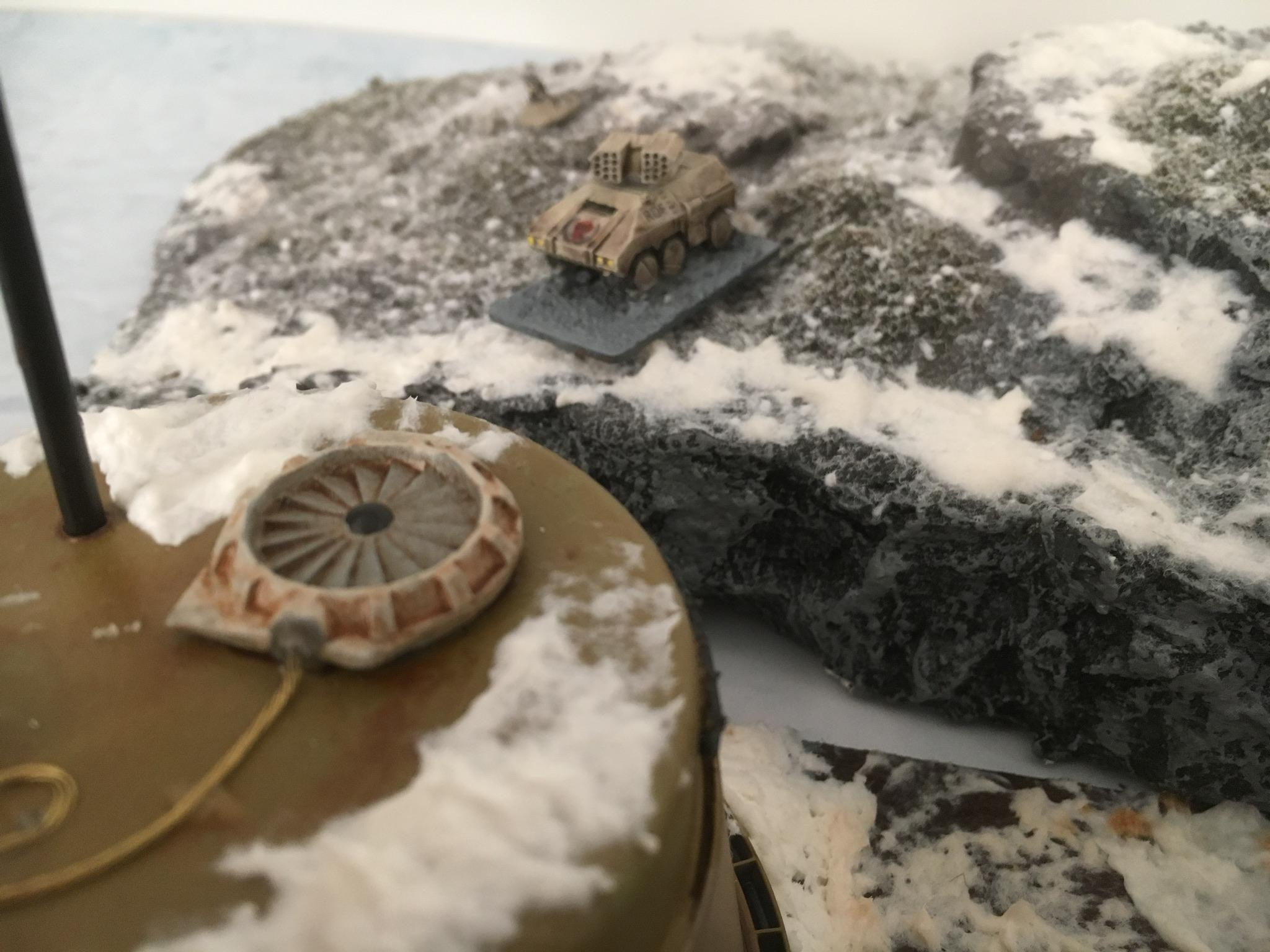 Meanwhile, Obidiah hits the gas and gets Tessa into position.
“Clip ready! Three air burst rounds! Take it out!” Shouts Colin, from his commanders seat.
“You got It!” Replies Clyde. Eyes glued to the gunnery sights.
The first ABR (air burst round) hits its shields. Soon followed by the last two as
the clip was emptied. Colin looked across at the auto loading mechanism as it worked overtime to load another three shot clip. 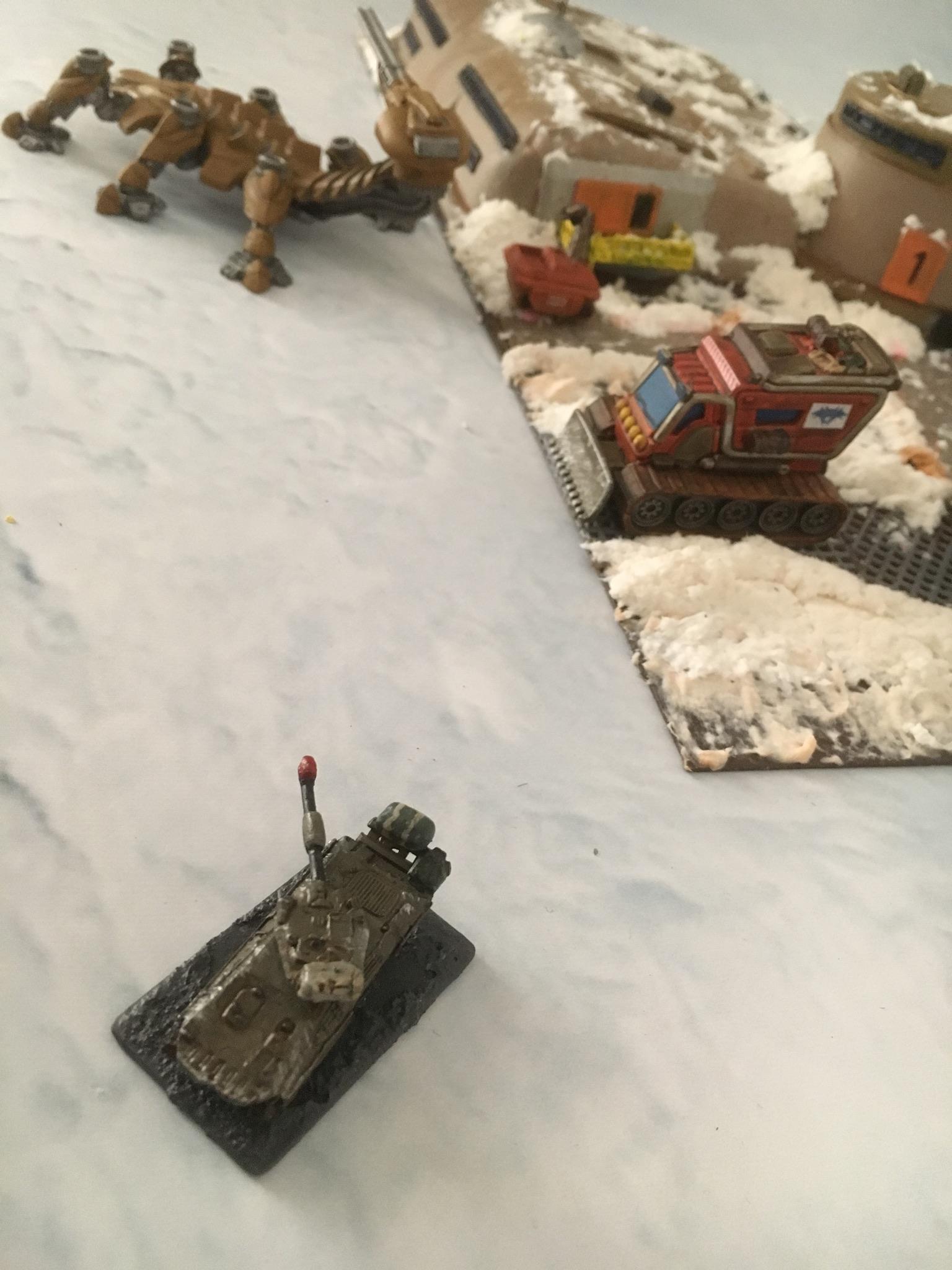 “Daniels how you doing?” Shouts McCallum from his position in the Paladin’s turret.
“Fine, boss”
“Good bring us around, we need to give the others some covering fire”
Daniels hits the gas and the Paladin shot into life. She swung the vehicle around as McCallum opens up with the 90mm gun. The walker’s shields soaking up the shots.
McCallum looks though his viewfinder and sees the tail gun starting to move. At first he thought that they were going to aim at him. But instead it targets the plateau where Shields’s and Gomez’s Archer is! A sense of dread over comes him as he sees it fire!

Gomez had moved the Archer out of cover just as Shields was about to let loose another rocket salvo. But the PHR operator was quicker. He knew the Archer was a huge threat. That first salvo nearly halved their power reserve. This time he would be ready. As the Archer came out of cover he fired. The huge gun cutting a large swarth into the plateau. The RDF Archer never shoot a chance as the vehicle instantly erupted. 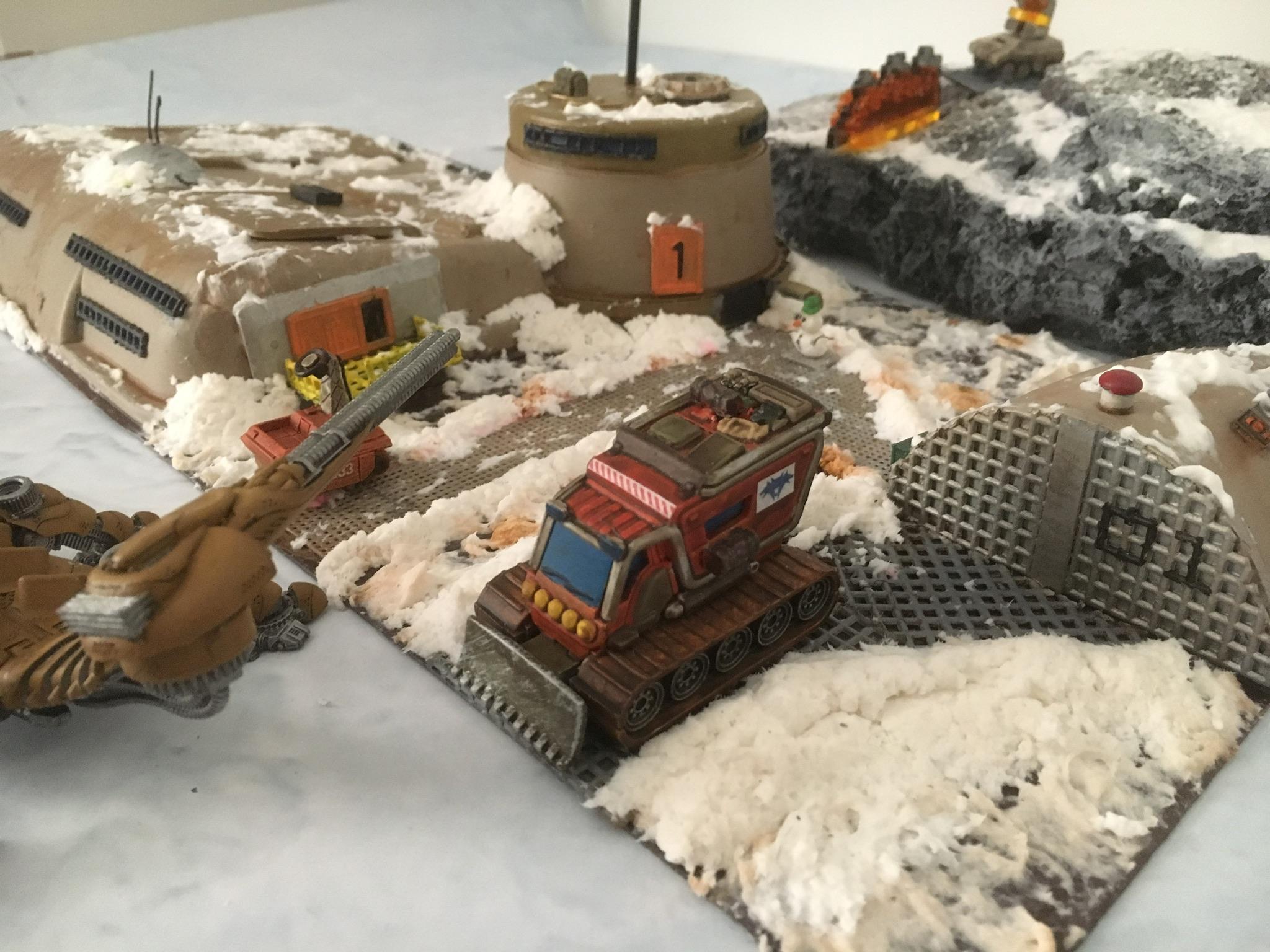 “We’ve just lost Shields and Gomez!” Cries Colin. He knew the others would have seen the destruction on the plateau.
“Their power must be low” Says Clyde
Clyde hits the traverse and lines the gun up on the walker. Another round burst from Tessa’s 115mm gun hits the walker. Clyde fires the other two, all three shots just impact on the walkers shields. He thumps the screen in frustration.
“There’s no killing this thing” he shouts.

Although the walkers shields are holding. What they didn’t know was with the use of its main gun as well as maintaining shields the PHR power reserve where being depleted. The PHR operator now locked Tessa in as a priority target! Colin watched through the viewfinder as the tail gun swung around in their direction!
“Obidiah!….get us out of here!!!!” Screams Colin
Obidiah hits the gas and Tessa’s 2000 horse power neutron combustion engine roars into life. The tank’s chassis groans in stress as Obidiah puts the Python into a tight turn and tucks it in behind the storage shed. Just as the Hades walker’s lethal main gun fires! 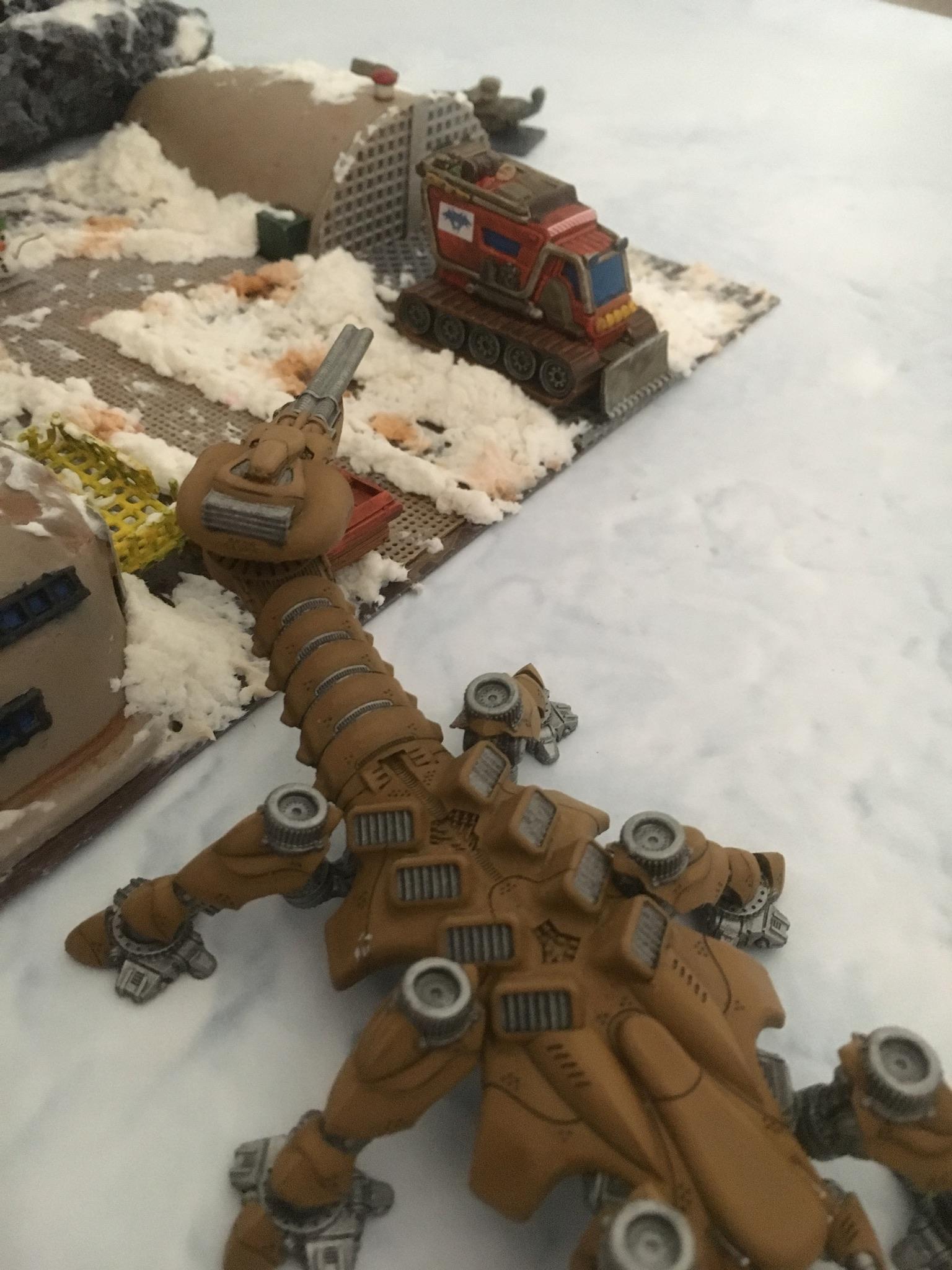 The energy burst cut through the storage shed with ease. Obidiah put the tank in a tight turn. Which helped avoid a direct hit but just still clipped the tank. Like a hot knife thought butter the energy blast cut through the hull. Obidiah was killed instantly and Clyde and Colin faired little better. The fighting compartment stared to degrade as the tanks molecule structure began to collapse. Colin reached for the emergency hutch as a tank caught fire. For a brief moment he felt the cold air. Then he felt like he was flying, then nothing.

Meanwhile, while his drone’s laser was charging. Woods saw the destruction of Tessa on the monitor. He had no idea if anyone made it out or not. Then the walkers main gun moved and begun to target his drone.

“Not this time” Says Woods, not to be caught out again.
He targeted the walker just as it fired. The energy burst shot out from its tail and high into the sky, straight at Woods’s drone!

He quickly took evasive action but the burst caught the side of the drone. Knocking out the gyroscope and sending it spinning to earth. Woods had lost his second and last laser drone but not before he got off a shot of his own. 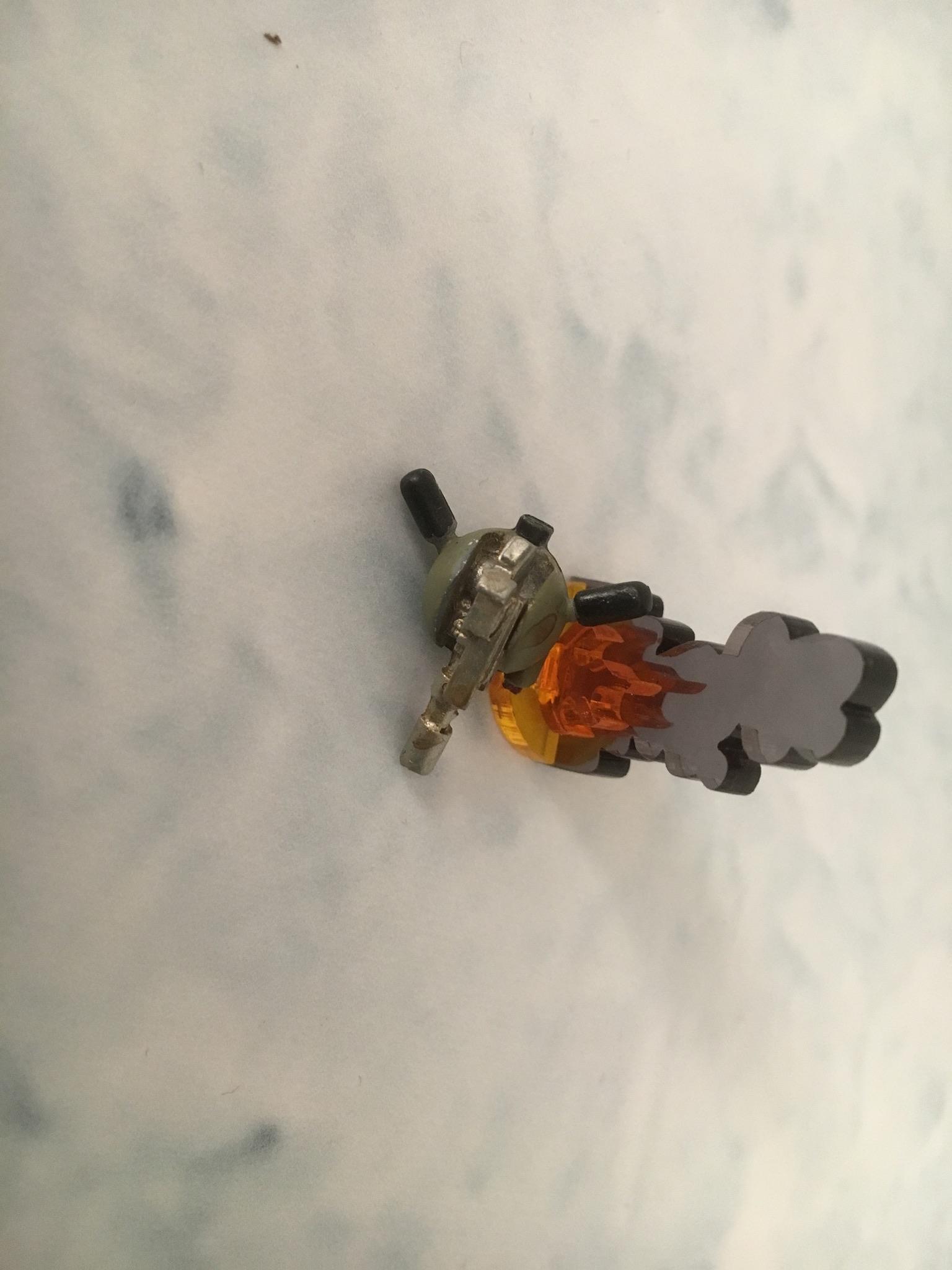 The drone’s laser hit the walker and went straight through their shields! The shot hit its tail causing it to break and fall limp to the ground. 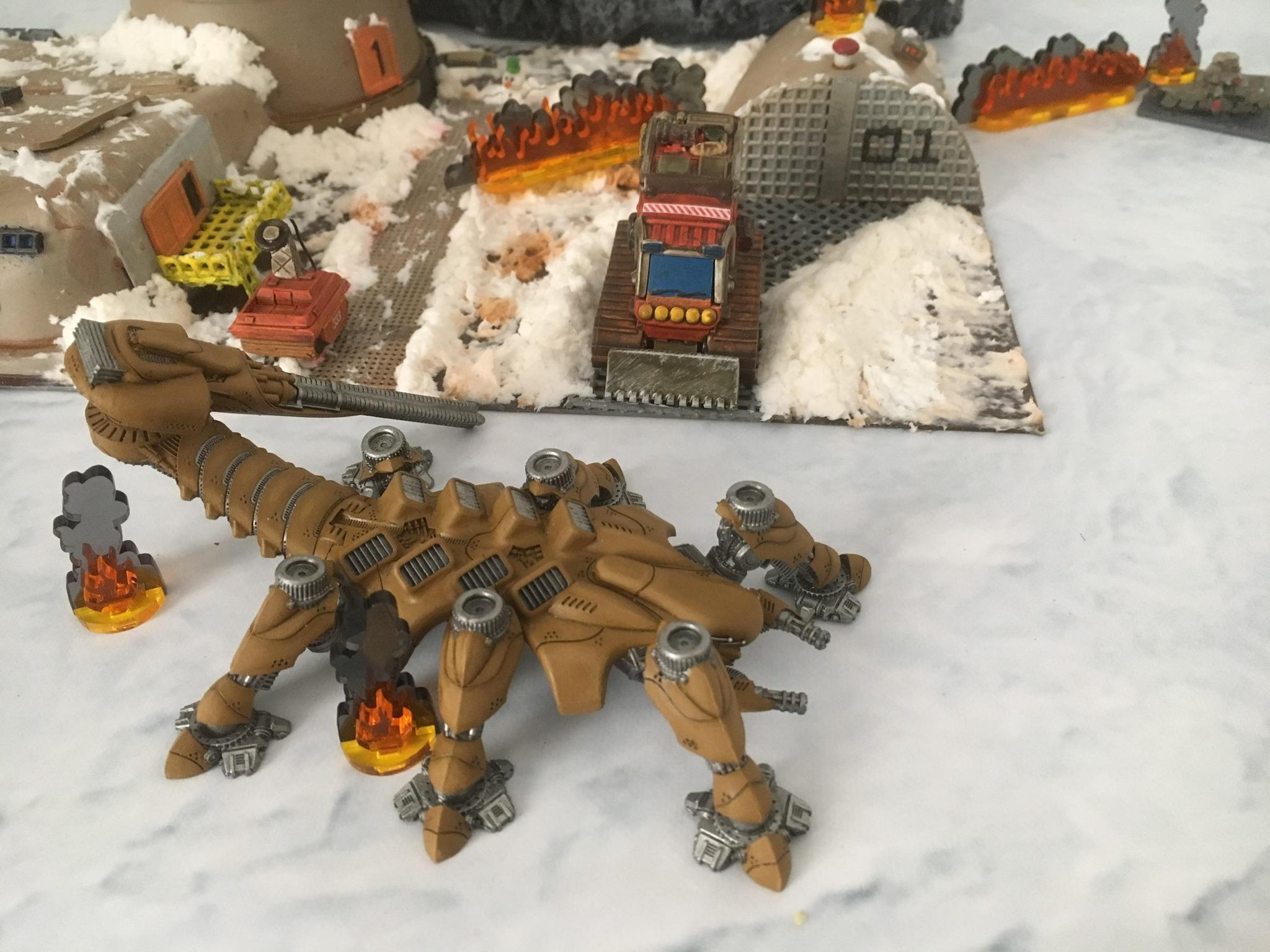 McCallum saw the damage through his viewfinder and smiled.
“Ok! Now we are getting somewhere” he shouts. “Daniels bring us back around let’s take advantage”.
Daniels hits the gas and closes the distance. McCallum firing the 90mm as they went.

Meanwhile, Ritter and Maine had remained in reserve. With both Shields’s Archer and Obidiah, Clyde and Colin gone, they swung into action. Ritter watched as McCallum’s Paladin moved in for the kill.

“Ok, here’s our chance. Thats back him up!”
Maine couldn’t wait. He hit the gas hard and the Pathfinder Ranger’s engine roared into life.
“Pay back time!” He shouts from the drivers seat.
Ritter squeezed the trigger of the GMG. Multiple grenades spat out exploding on the walkers skin. Then Ritter saw that McCallum was targeting one of the legs. He too fire at the same leg, emptying the weapons magazine. It worked! The leg shattered in half, bringing the huge Hades Walker to a crippling halt. 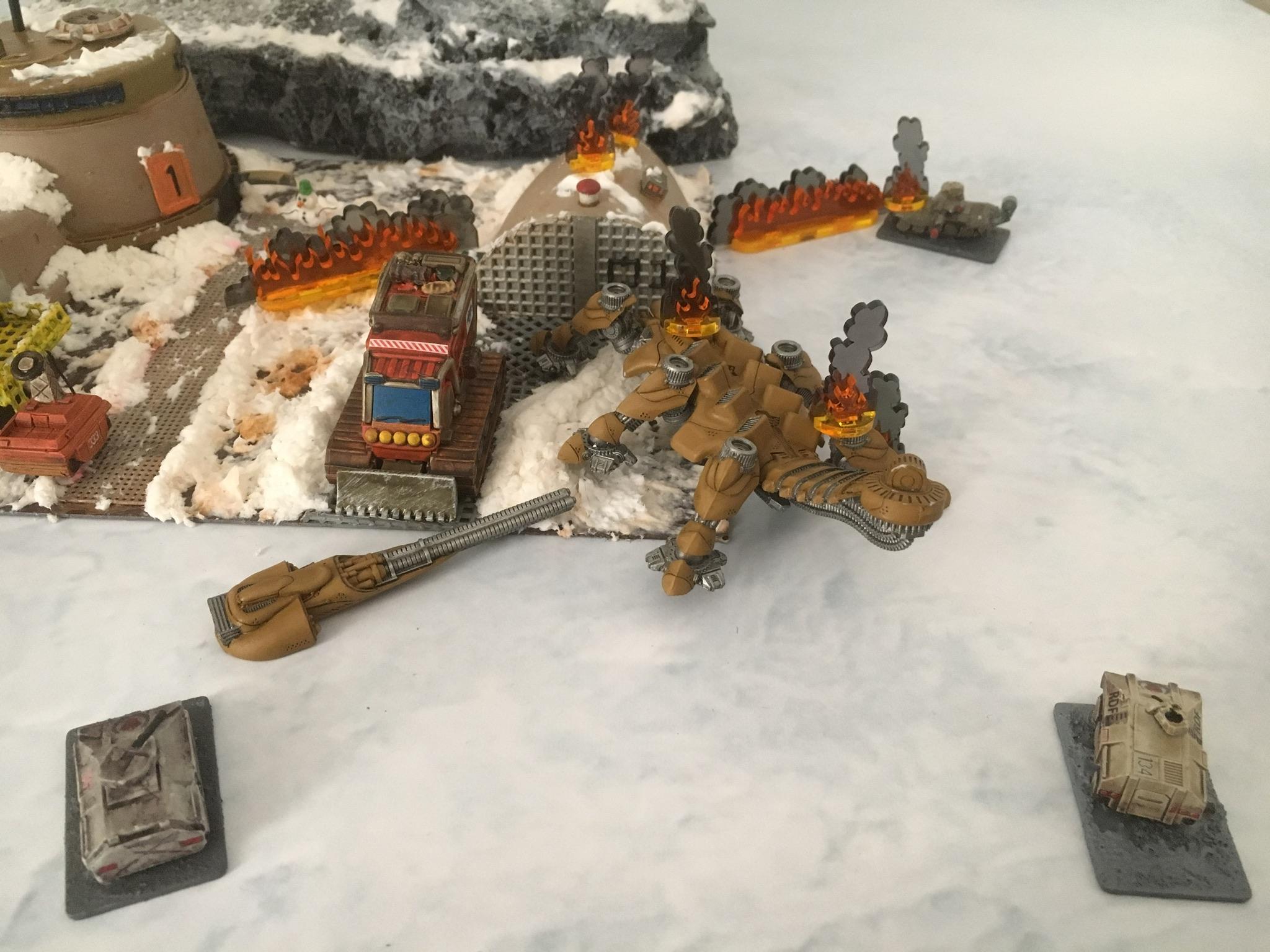 Cheers went up inside both Pathfinders. Ritter had emptied the GMG’s magazine and shouted to Maine that he needed to do a reload drill. Meanwhile McCallum continued to put shots into the walker from the Paladin. Daniels brought the Paladin to a halt and looked back at McCallum
“Great job boss, now finish him” she says.
McCallum smiled as he waited for the main gun to load. He looked out his viewfinder and saw movement. It was a PHR soldier and he had his weapon levelled at the Paladin. Daniels saw him too and hit reverse to get the Paladin into cover. 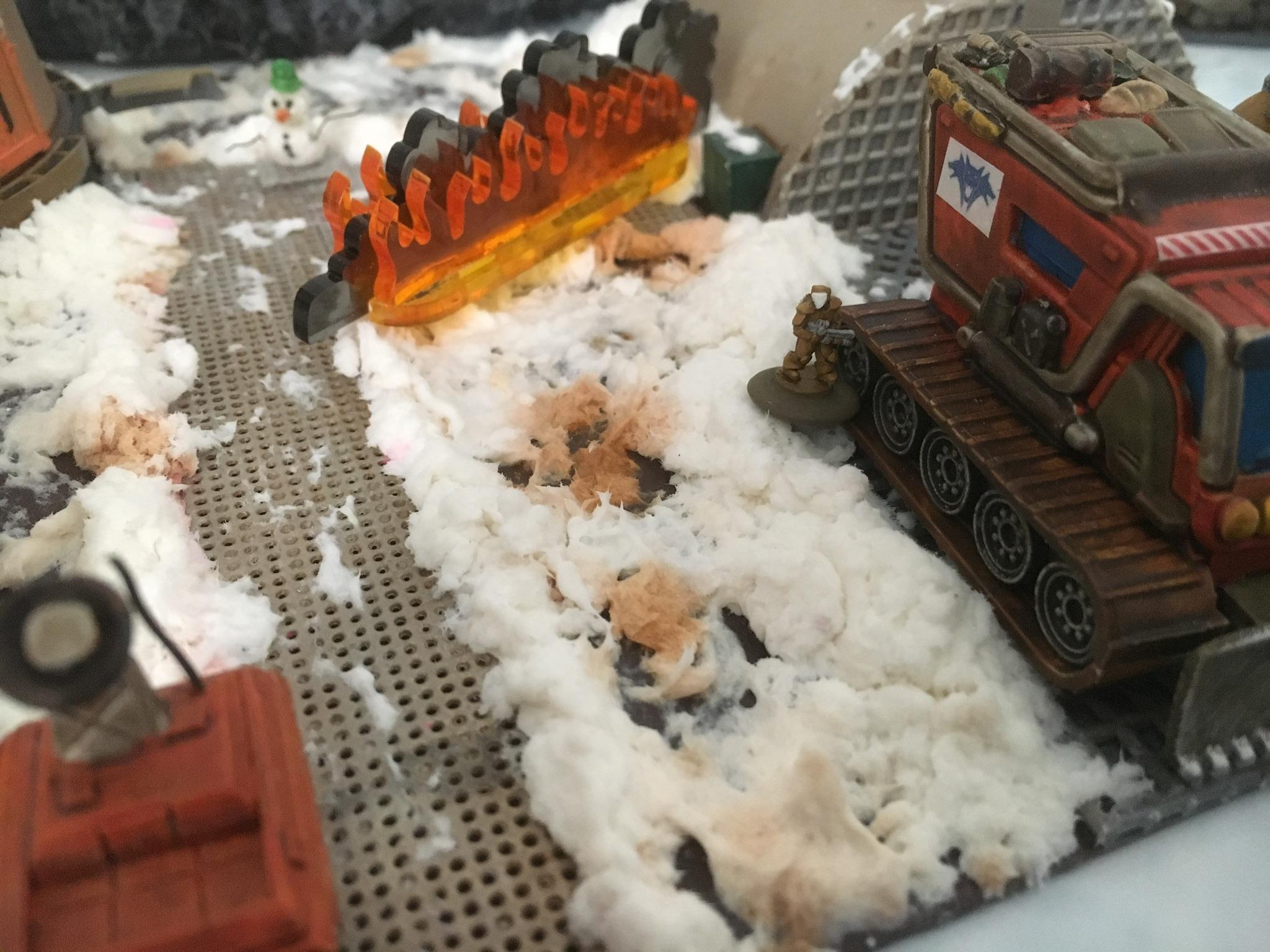 The high power energy shot hit the Paladin, penetrating the hull. Unfortunately the energy shot, although badly depleted in energy struck Daniels. She yelled in pain then collapsed, slumped at the drivers controls. The PHR soldier, using nearly all his power reserve fired twice more. The first shot hit the turret taking out the main gun and narrowly missing McCallum. The second cutting through the Paladins side armour and causing a fire. McCallum picked himself up after dropping down from the turret. He rushed forward as the vehicle begin to fill with smoke. He grabbed Daniels and pulled her out through the emergency hatch. She was in bad shape, the wound from the energy burst was getting worse as it continued to break down her cell structure. McCallum wasted to time, he took a vile of GX gel and stabbed it into her. Immediately the gel went to work to revitalise her cellular function. Soon a battle of good and bad was happening in Daniels’s body, destroying and repairing cells.

Ritter and Maine both saw McCallum and Daniels struggle.
“We need to help them” He shouts to Maine
But before Ritter had chance to target the PHR soldier with the GMG. He fired, although the energy burst penetrated the Ranger’s armour. Both Maine and Ritter were unhurt. Unfortunately, the energy burst cut through the vehicles wiring loom. In an instant the vehicle lost all power and came to a halt. The interior caught fire and both Ritter and Maine wasted no time in exiting the destroyed IFV.

Ritter clicked off the safety catch to his minigun. He soon found his target and fired! The PHR soldier, realising that he was in trouble switched his power from weapons to shields. Just as A full burst from Ritters minigun hit him. Unfortunately for him, because he had been firing his weapon on high in order to penetrate the Pathfinders. It left him with low power reserves and the second minigun burst penetrated his suit, nearly cutting him in half. Blood spurted out as he crumpled, dead to the ground.