The next instalment in my aircraft gallery is the Luftwaffe fighters. A few more names and numbers this time and I’ve added a little more description of each type of aircraft too. 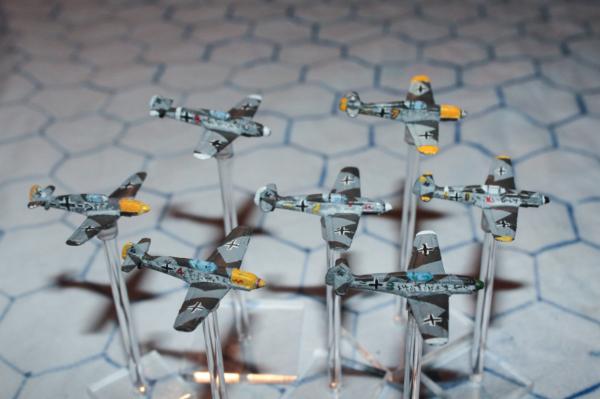 Here is a selection of Bf 109 aircraft. There’s so much variation in the markings and styles I was just picking and choosing ones I liked and famous flyers. So no proper squadrons this time.
Mescherschmitt’s Bf 109 was the backbone of the Luftwaffe’s fighter force. Very advanced for its time it first served in the Spanish Civil War and then on into the beginning of WW2 hostilities where its combination of speed, agility and deadly firepower was a tall order to match. Through constant development and in the hands of some of Germany’s top aces it remained competitive to the end of the war. 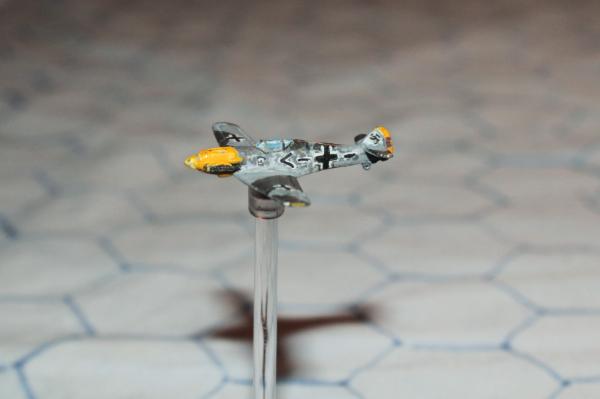 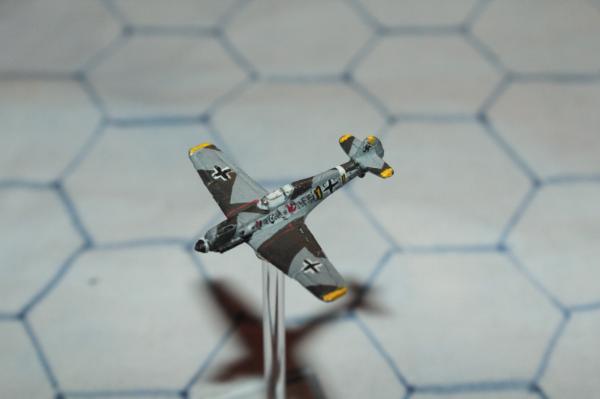 One of my favourite WWII aviation stories is of this guy, Franz Stiegler escorting a crippled B17 out of Germany in this Bf109 marked 2+~ 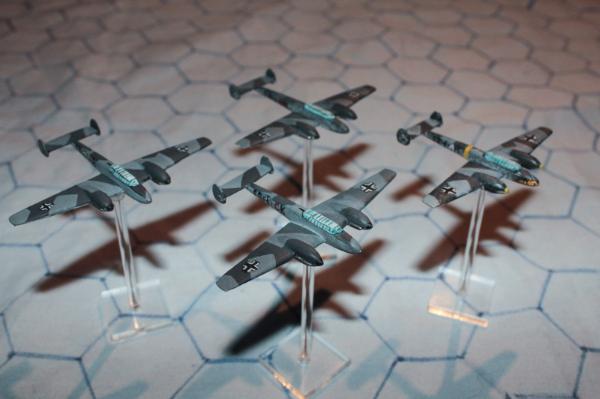 Moving on to the Bf110 which was the aircraft of choice for many top German pilots in the early years of WWII. The German top brass really believed in the Zerstorer concept; the fighter-Bomber, one plane to rule them all or something like that: but the reality of the Bf 110 was a more of a jack of all trades and master of none. Too slow and unwieldy to really cope with more modern fighters and too light and limited in range to carry much of a bomb load.
Its shortcomings in daylight operations saw it withdrawn to night fighting where its spacious canopy allowed for adaptation to radar guidance and it soon became the bane of many a night bomber. 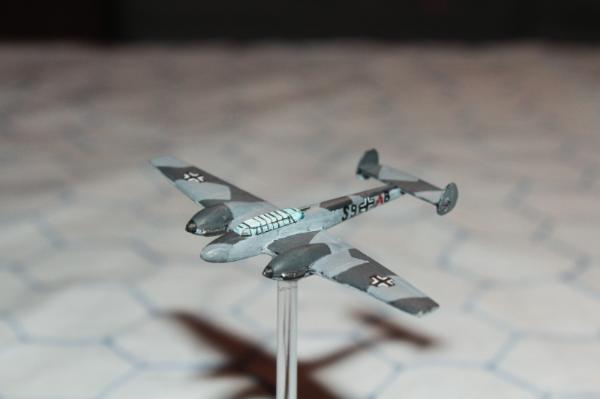 This example marked S9+CB is the aircraft of Walter Rubensdörffer who was the leader of ErprGr210 and was shot down in England following a low-level raid at Croydon Airport on 15 Aug 1940. 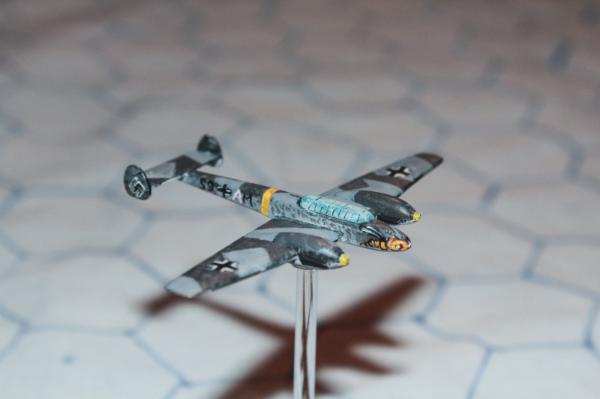 This is one of my favourite nose arts seen on the Bf 110 the ‘Wespe’ Tricky enough to paint at 1:300 scale! 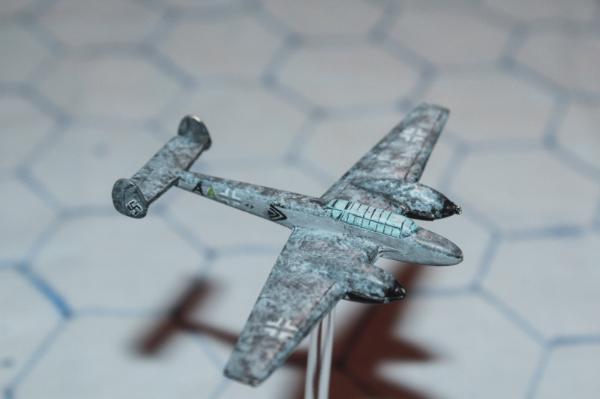 Hans-Joachim Jabs << + AA who flew 720missions both day and night claiming 50 enemy aircraft many of which would have been considered technically far superior to his own ageing Bf 110. 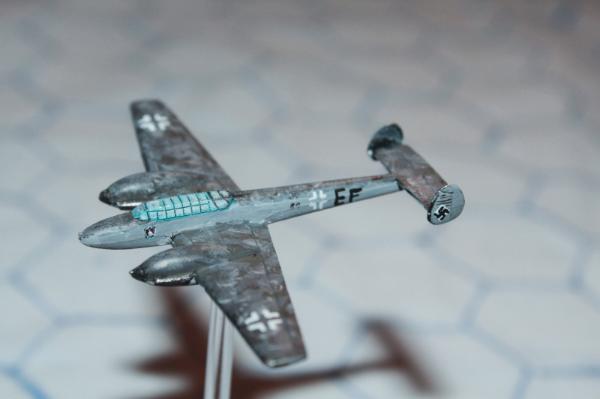 This is the Bf 110 of Heinz-Wolfgang Schnaufer G9 + EF the port tail fin of which recently sold at auction for £90,000. Schnaufer claimed 121 victories in 164 combat missions. 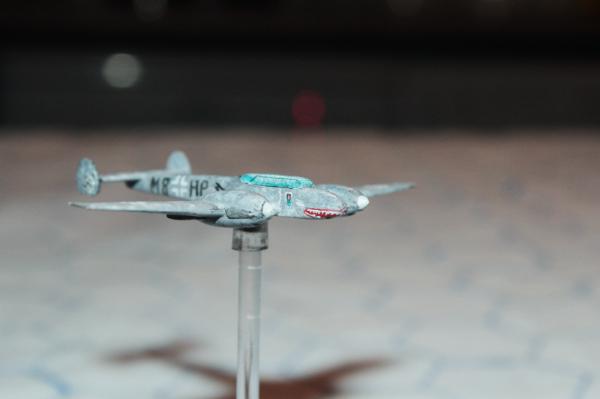 Wilhelm Herget M8 + HP – flew over 700 missions as a night fighter mainly against RAF bombers over the western front. I enjoyed painting the shark teeth on this one. 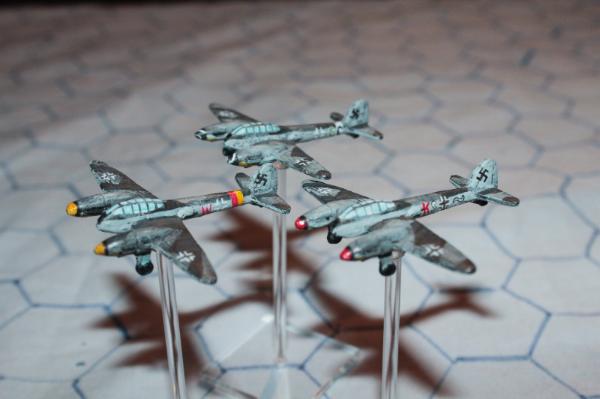 The long awaited and delayed replacement for the venerable and much maligned Bf-110 came in the form of the Me 410. (The original designation was going to be Me 210 but the prototype and initial production craft had such a poor reputation that the final redesign was given a new designation in an attempt to allay concerns) By the time of its entering service in 1944 It was a case of too little too late for the Luftwaffe as the old Bf 110 had muddled through most of the war and early jet technology was already in development. 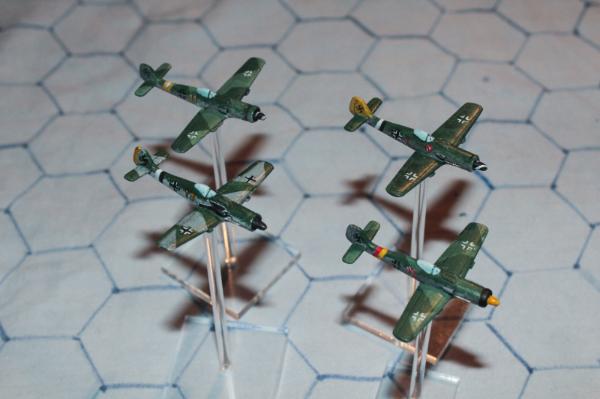 Often considered the very best of the piston driven fighters the Luftwaffe ever developed the Focke Wulf 190-D (the Dora) in the hands of a decent pilot was more than a match for the Spitfire or the P-51. However by the time it was available in large scale use in early 1945 its deployment was limited by serious shortages of aviation fuel. 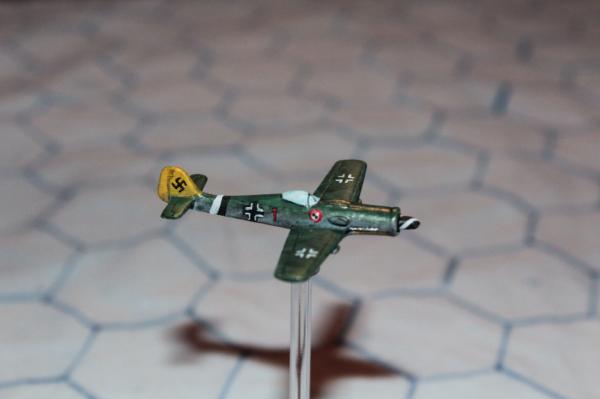 This is the FW 190-D of German ace Hans Dortenmann who flew mostly in Russia and in Germany until the end of the war. He painted the entire vertical surface of his tail fin yellow for easy identification.

And finally for now, the Messerschmitt Me 262 was the world’s first operational jet fighter and at the time of its introduction in April 1944 was the fastest most heavily armed fighter in the sky. It had been a massively expensive project beset with set-backs and difficulties and as a result arrived too late in the war and at too high a cost to have any significant impact on the outcome. The Me 262 was none the less an important pioneer in early jet technologies. 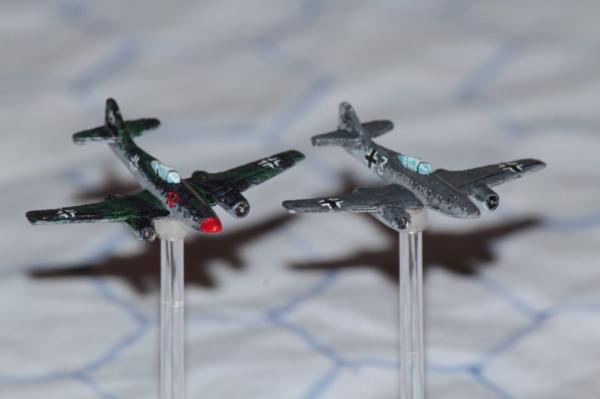 On the left is the Me-262 of Heinrich Bär. ‘Red 13’
Heinz Bär was credited with 220 aerial victories, including 16 while flying the Me 262. He was also known for his ill discipline and lack of respect for authority. Reichsmarschall Hermann Göring had a particular dislike of him and three times denied him the highest award, the ‘Diamonds’ to his Knight’s Cross.

Then on the right its another of Franz Stigler’s rides. Franz Stigler, you’ll recall was that B-17 escorting fella. (Well, he escorted one B-17 out of Germany, he was known to have shot down another 11 heavy bombers) “White 3” was his personal jet, flown by him directly from the production line at Leipheim to join Galland’s JV44. Adolph Galland was known to pull rank and borrow it on occasion as ‘White 3’ was considered something of a “hot” ride.
Here’s a little shot of my CY6! Set up. 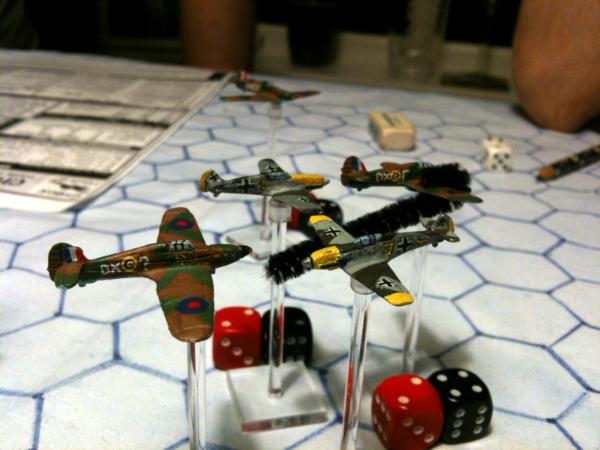 This was a Hurricanes vs Bf-109 dogfight. I think we had 5 Hurris against 4 109’s. I’m using basic flight stands with red dice for speed and black dice for altitude next to each plane. Black pipe cleaner to indicate engine damage and a red one for airframe damage. 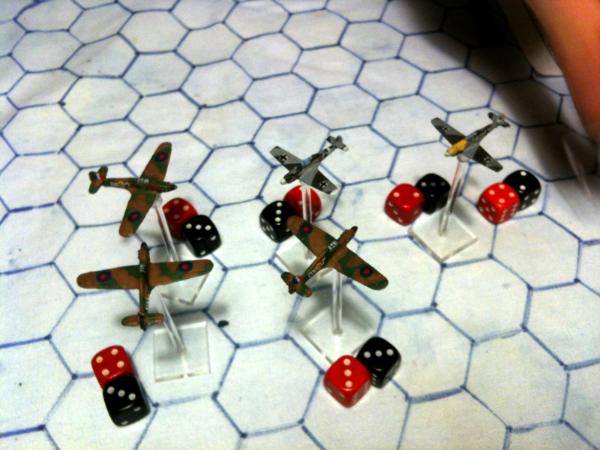 This was the first game I tried and it was fun to learn how the game mechanics work. Tricky enough to get to grips with at first but an exciting game where things can change very quickly. A desperate shot can turn into a lucky victory or a sure kill can be frustratingly illusive. A game best kept small. (despite my increasingly large collection of aircraft)

As ever thanks for looking and all comments welcome.