Reply To: Napoleonics at AdeptiCon 2018

That’s perfect!  I personally have no idea what is really different between a Heavy Cavalry and Curiasser, and things like what characteristics and when is brilliant to use for ImagiNations.  I love history, but the few times I have engaged in attempts at playing Napolionics I have fallen foul of the “button counters” and been turned off.  I’d rather play ImagiNations as then those same people couldn’t cast stones, as well as loving the fun of creating.

Well, if it helps any, our ESR Napoleonic Campaign Guides include both scenarios *and* uniform plates, so you can paint right from them. But with that said, creating your own historical world is pretty cool, so not trying to dissuade you.

I’d think that if there was some sort of points system that would help with unit creation, as well as some sort of way to help generate those army design “starting funds” for campaign type games.  All of the info and details that help a newbie really put together an army.

We’re currently working on a point based army builder that can be used by players who’d rather not use strictly historical orders of battle, so that might speak to this.

Also… Our 2nd ESR Napoleonics game at AdeptiCon, the French managed to succeed in forcing an Austrian withdrawal, but it was costly. 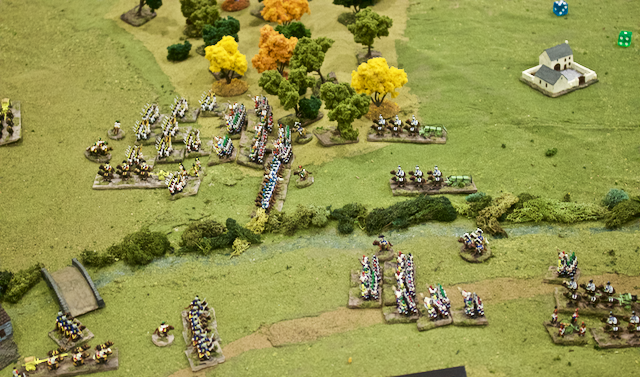 Lots more photos and a brief rundown of the action can again be found in our Gallery.