Taking a little longer than I first thought. Just waiting on a few things to dry then all the scenery for the prologue will be ready. In the mean time I can start by splitting it in two. The second bit will follow very soon. I hope. In the meantime let’s get the adventure underway!

Master Godfrey rode hard. Pushing his horse to the absolute limit. He knew he had to stop. He knew he had to take breath but his cause was too exigent . He had to get back to his Brothers and the encampment. Then his horse collapses from exhaustion and Godfrey gets thrown from the saddle. His face hits the ground and he rolls over. He lays there a while, getting his breath. Then he moves over to his horse.

“I’m sorry my friend…..I’m sorry for all this” he says with sorrow as he places a hand on the stallion’s head. Aurora was more then just his trusty steed. He was his friend, companion when times were hard. But Godfrey knew this was greater than both their life’s. 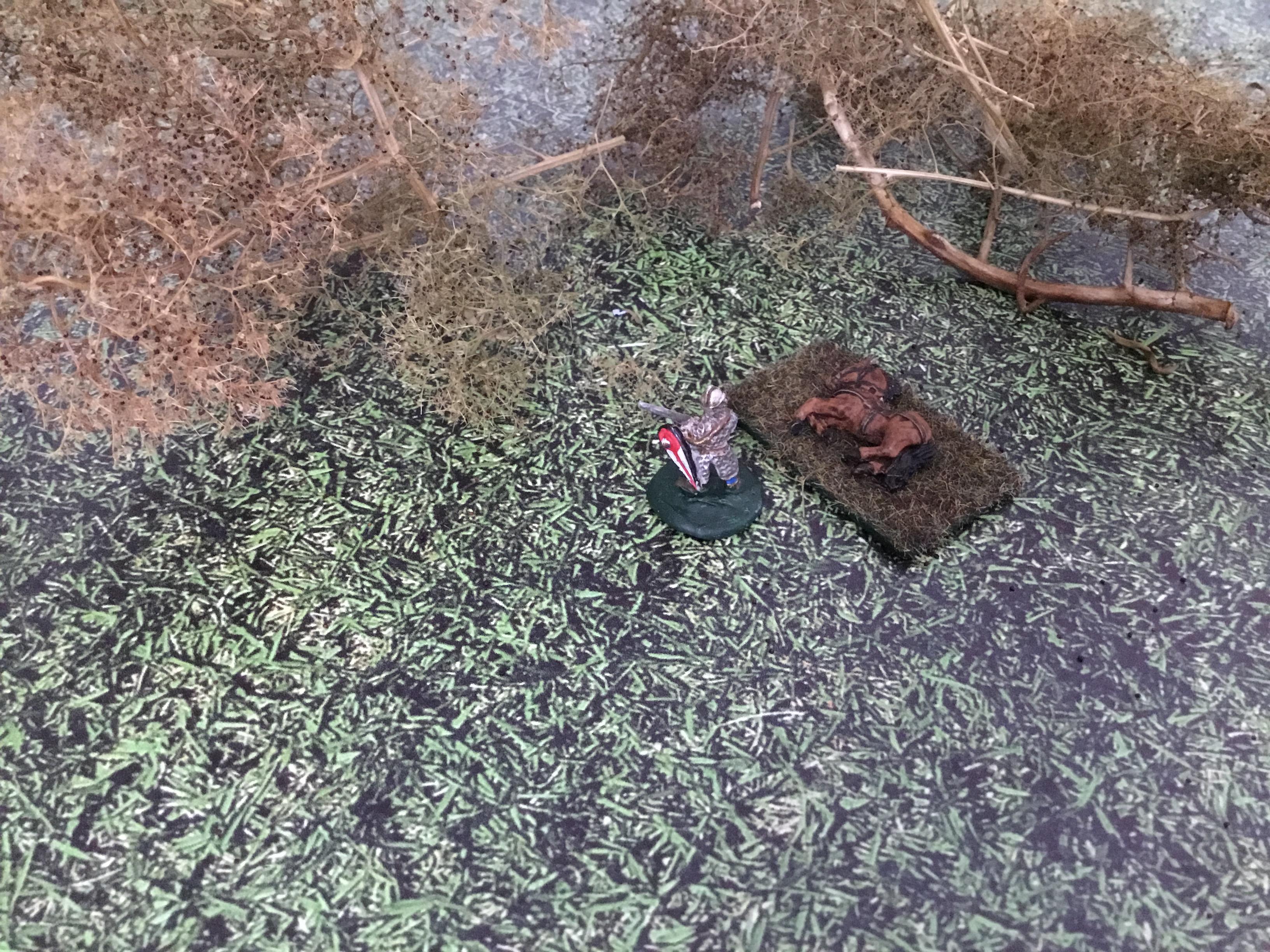 He painfully gets to his feet. His face bleeding and his body aching. Then something started to unsettle him. He stares into the woods, looking hard. He knew he was being pursued. Then his fears were confirmed. Out of the gloom of the trees comes a figure. A knight; A knight on foot. Godfrey wondered were his horse was. No foot soldier could of came this far without a horse. It was most strange. But it mattered not. Godfrey was in danger and he knew it! 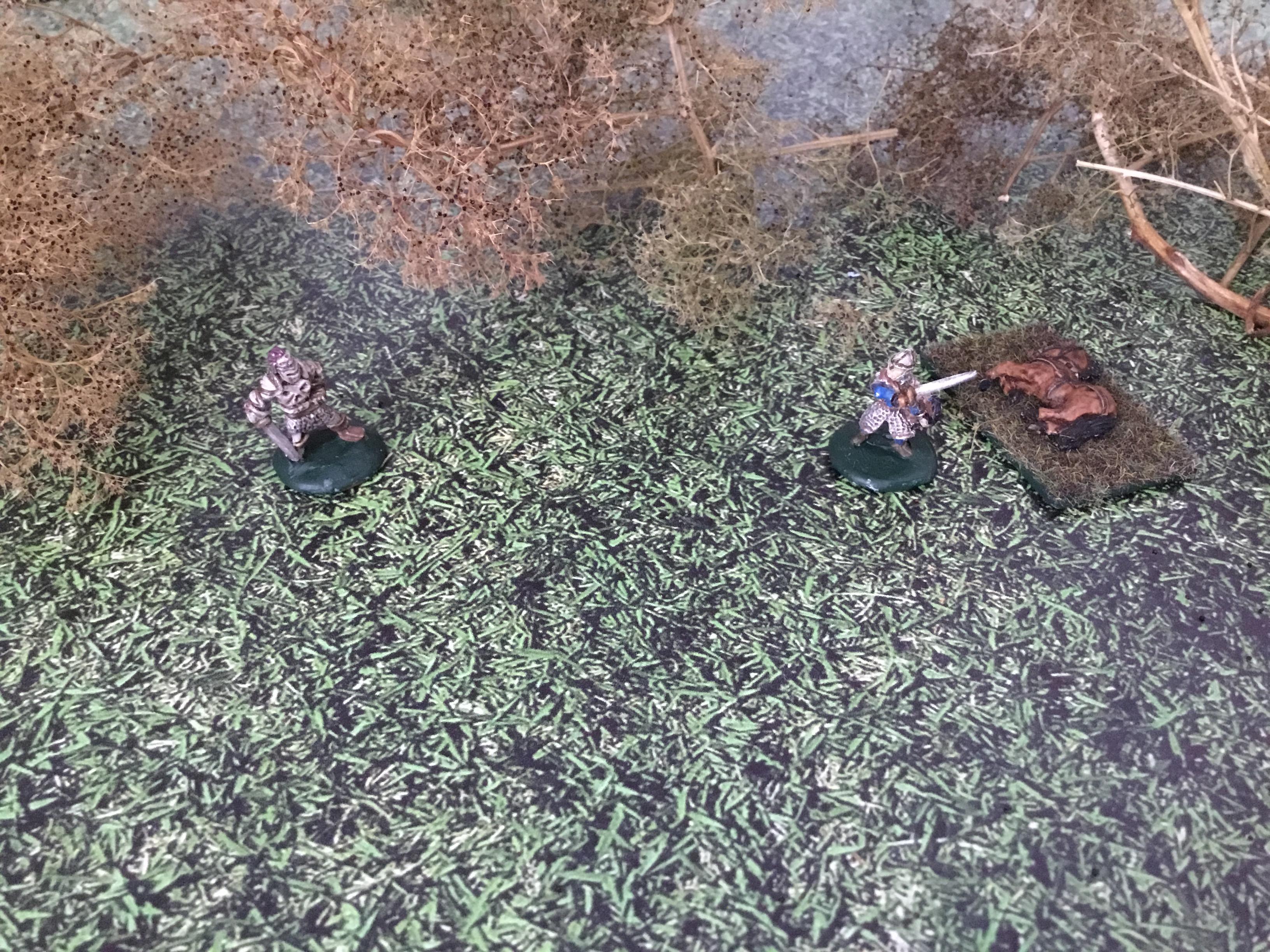 He forgot the pain as he drew his sword. Kindred Spirit was a bastard sword with no set identity as such. Hand and a half grip, allowing single hand and a shield combat or be wielded with both hands. Unlike most swords she was forged from Herculaneum steel, beautifully balanced and without doubt the finest blade in all the lands. But today she would wield slightly off balance.

Godfrey readied himself behind his shield. The knight came straight for him without falter. Godfrey knew he had to kill him quick. More enemies would surly come so he dropped his shield and used both hands to grip Kindred Spirit. 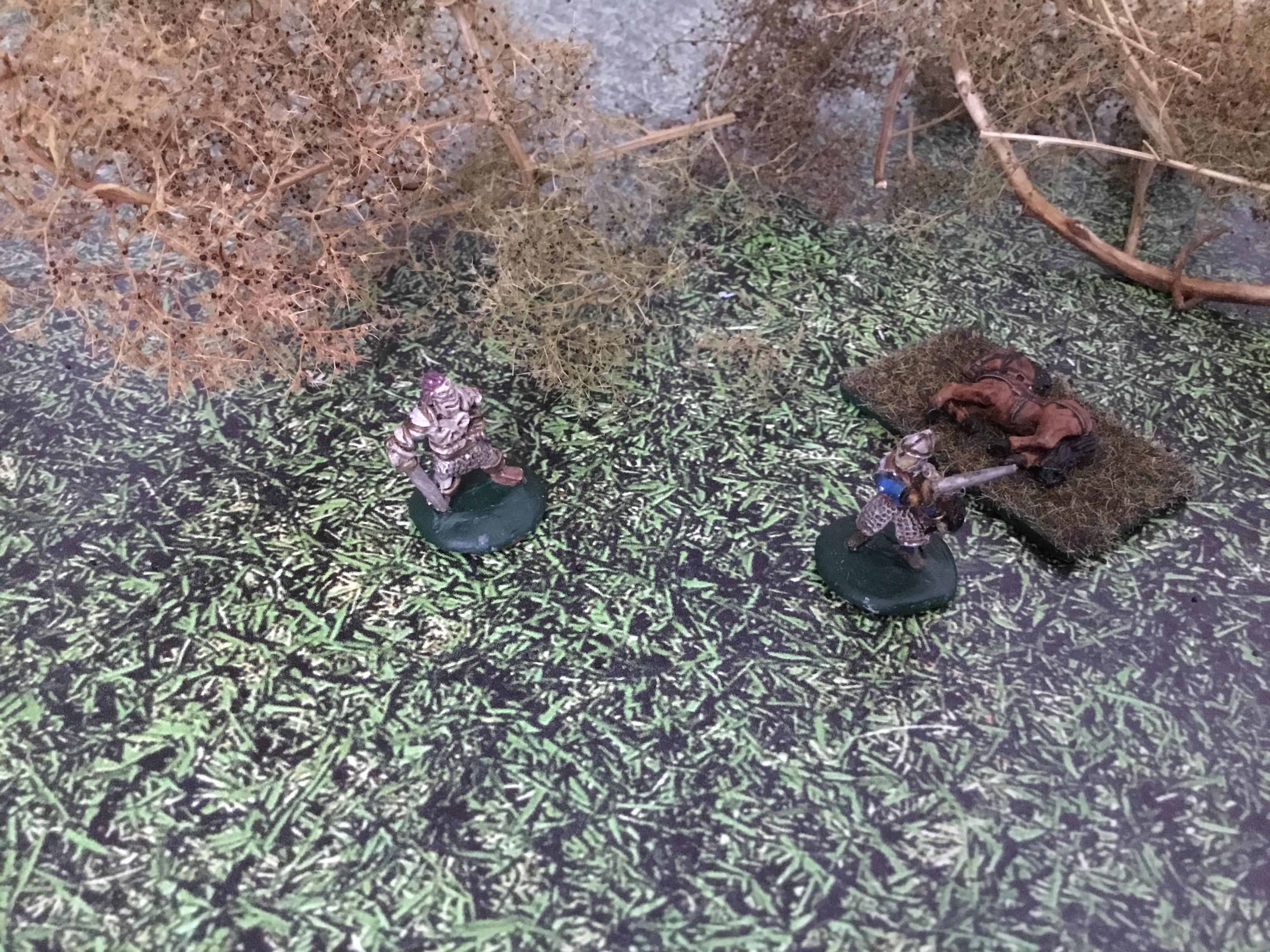 The mysterious knight parried Godfrey’s attack and struck, catching Godfrey’s mail armour under the arm. But before the knight could follow through. Kindred Spirit’s Herculaneum steel blade came true. The sword smashed into the knight’s sword; shattering it in two. Godfrey wasted no time, he had the advantage now. He brought his sword up over his head and brought it crashing down. The impact was devastating. Taking a chunk out of the knight’s helmet. He fell back onto the ground and Godfrey, changing grip drove his sword deep into the knight’s chest plate. He withdrew it and stepped  back exhausted.

He picked up his shield and day sack from his fallen horse and made his way out of the woods and into a clearing. He looked and around and caught sight of a small farm. He started to make his way to it then he winced in pain. He felt under his mail coat. Felt the warm blood run down his body. It seemed to be more serious wound then he first thought. The pain increases as he falls to his knees.