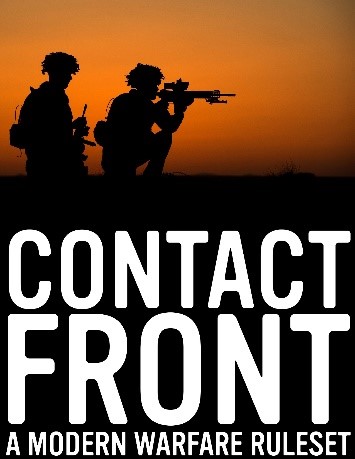 Gods Eye Games is excited to announce that we are entering into a new genre of wargaming with an agreement to publish Contact Front, a modern warfare ruleset.

Contact Front, a creation from the mind of Carl Titterington, is a platoon level modern game which puts the player in the position of platoon commander.

Contact Front will challenge players with striking a balance between completing objectives and getting your troops home safely.  The asymmetric nature of modern warfare requires that players consider victory in different terms than traditional contemporary World War conflicts.

Contact Front will be released later this year in both print and digital formats and a series of future supplements are already being written.  You can look forward to exploring all the contemporary conflicts of the new millennium.

Read the full story in the news section at www.godseyegames.com.

Jump over to The Official Contact Front Wargames Rules Group to interact with the author and all the other fans.

gods eye games modern News
This entry was posted on Tuesday, July 9th, 2019 at 08:52 and is filed under News. You can follow any responses to this entry through the RSS 2.0 feed. You can skip to the end and leave a response. Pinging is currently not allowed.