I am thrilled to let TWW community know that the newest Horizon Wars game, Horizon Wars: Infinite Dark is now available to purchase in PDF or hardback print-on-demand editions. 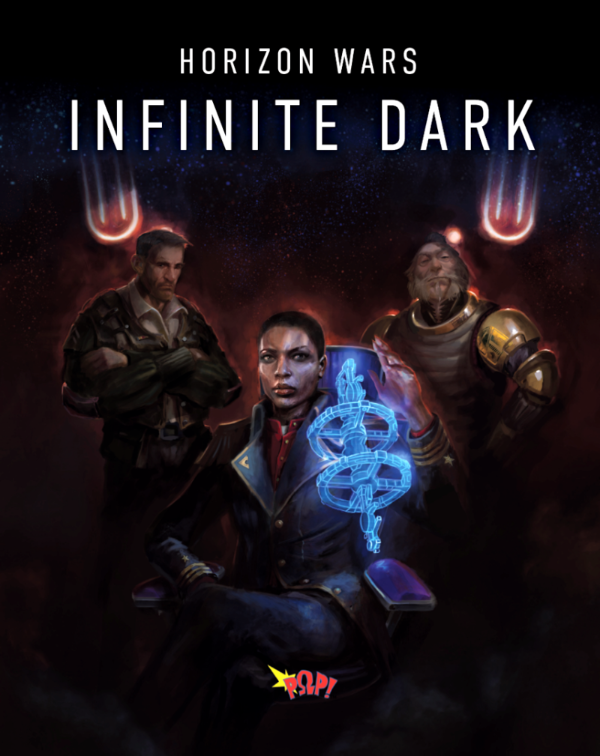 The glorious, unstoppable expansion of humanity into the stars has ended. The benevolent guidance of the mighty Artilects saw the full range of humans — natural, synthetic and uplifted partners — mature into a species of curiosity and innovation. But now the Artilects have gone, and the stars are the playground of their ruthless inheritors.

But the framework of jump-gates that made a galactic civilisation possible is falling apart.

Take command of your own fleet of vessels, recruit heroes to take their helms, and take to the spaceways to build your own legend in the newest game in the critically-acclaimed Horizon Wars series.

Horizon Wars: Infinite Dark is the new starship combat miniatures game from Precinct Omega Publishing. Use your favourite spaceship miniatures to play games in any of three command levels, from deep space dogfighting up to capital ship encounters, in Solo, Co-op or Versus play modes.

First, it has solo and co-op play rules built right into the core game alongside traditional versus play. Second, it is playable in three different "scales" of combat, from fighter-on-fighter space dogfighting, through mid-range scout and exploration vessels, up to the mighty conflicts of vast battleships. And third, not only can you build and customize your vessels, but you can also choose to add pilots - customised heroes with their own strengths and weaknesses, whose evolutions, triumphs and disasters are a part of the narrative of your fleet.

Here are some links to the blog posts I've written about the game and its development:

New Release Precinct Omega Sci-Fi
This entry was posted on Friday, May 28th, 2021 at 10:25 and is filed under News. You can follow any responses to this entry through the RSS 2.0 feed. You can skip to the end and leave a response. Pinging is currently not allowed.