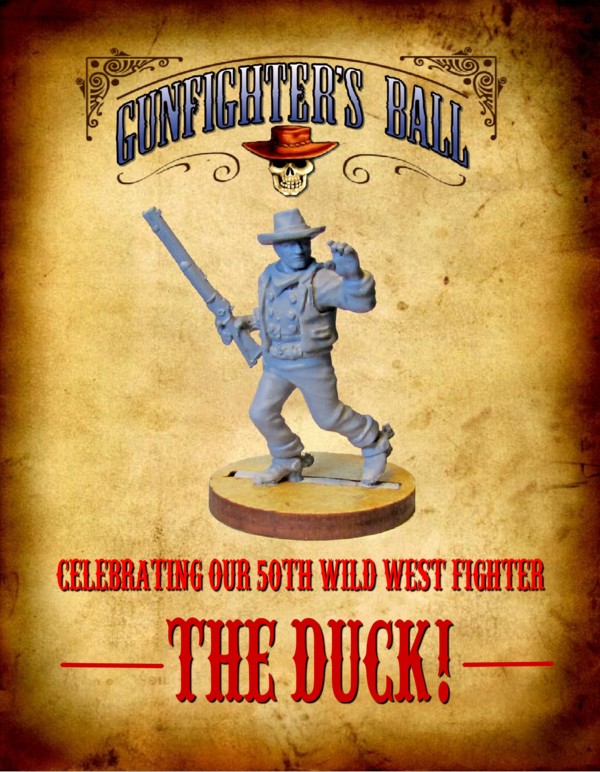 Knuckleduster Miniatures has just released the 50th, 51st and 52nd gunfighters in the Gunfighter's Ball product line (not counting our 24 packs of bystanders). To celebrate, the 50th release is the most iconic western hero of them all!
Gunfighter's Ball figures are designed for any Wild West game, as well as the upcoming Gunfighter's Ball system, which is targeted for a Kickstarter this Autumn.
Along with our recognizable hero, three other packs have been released. Two single characters named Arkansas and Jimmy have joined the collection, and a faction pack called "The Good Guys" has been released, including a ragtag band of heroes to defend your western town from bad guys of every ilk.
Gunfighter's Ball figures are Lead-free pewter with MDF slotta bases included. The figures are large 28mm/32mm scale, designed to mix well with Dead Man's Hand and Black Scorpion as well as other brands of western and steampunk figures made in recent years. Individual figures are $3.50US and faction packs are $18US.

28mm Knuckleduster Miniatures New Release western
This entry was posted on Friday, June 9th, 2017 at 09:09 and is filed under News. You can follow any responses to this entry through the RSS 2.0 feed. You can skip to the end and leave a response. Pinging is currently not allowed.