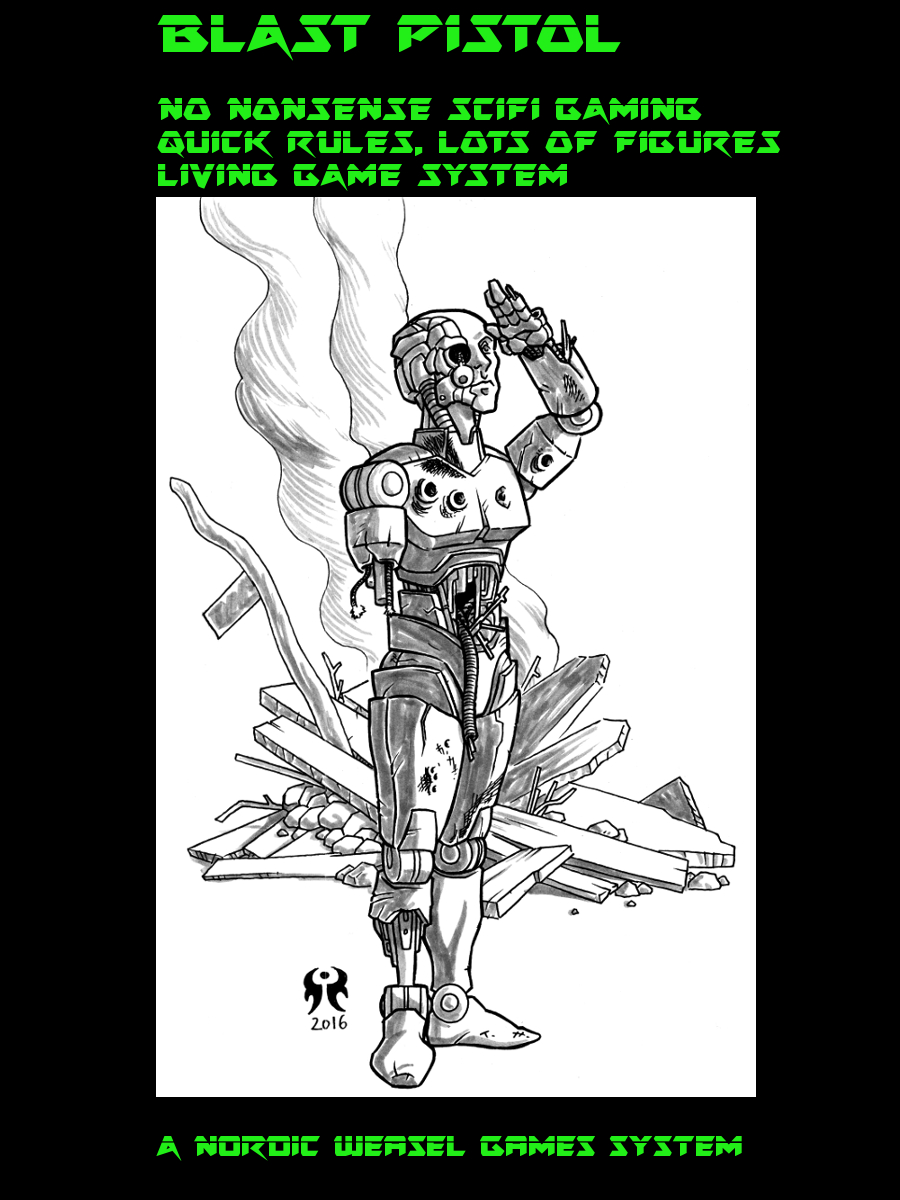 This is going to be a bit long, so please bear with me.

I am very excited (and nervous) to present a new initiative from Nordic Weasel Games.

This consists of a pair of two "sister" games, Blast Pistol and Last Era, dedicated to scifi and fantasy skirmishing respectively.
Blast Pistol just went live while Last Era should be live tomorrow if all goes well.

The two games share a common game engine, designed to be very straight-forward and easy to play.
The core mechanics can be summarized in a few pages, relying on a D10 with a few, simple modifiers, a short stat-lone and an alternating turn sequence slightly reminiscent of the old Warzone and Chronopia rules.

With a focus on simple gameplay, the games will allow a large number of figures to be used.
In testing, 30-40 figures have been the norm on each side, but smaller or potentially bigger games are easily possible.

A very simple mechanic allows troops to gain experience in battle, though it is (as everything else) written for maximum simplicity.

So what is so new?

First, while the game has a very basic set-up sequence, each game you will dice for a Battle Condition. These can be things like a surprise encounter, bad visibility or heavy gravity.
This allows even a basic pick-up game to feel unique.

The initial game rules come with 6 simple conditions intended to show the basic concept, but many more will follow, which can be far more involved.
Players of Vor:Into the Maelstrom should find the basic idea familiar, if much simpler here.

Second, the game is points driven from the start.
The initial collection of units has been picked specifically to make it easy to devise your own units, but for players who prefer an army list, the games ship with 10 units each, divided into 5 squads, 2 characters and 3 vehicles (scifi) / monsters (fantasy).
The army list is open-ended at the moment, leaving it to players to decide what units can belong to what army.

Third, the game is intended to be a Living game.
This means that it will receive frequent, small expansion booklets, each of which will add new units, battle conditions and updates.
Over time, these expansions will be folded back into the main rules along with tweaks, fixes and fan feedback.

Through Nordic Weasel, almost every game I've done have seen updates, expansions and sometimes even entire new editions as time has gone on.

I think the ability to develop a game with this in mind from the ground up, and have players be able to grow with the game, will be immensely exciting.
This means that players can get the game now, in its "core" form, and watch it grow and develop over time.
Some additions will be free, some will be sold separately and considered for future inclusion.

The games are intended to be highly accessible:
This means they are made to be as print-friendly as possible (The unit listings could be better, but they'll be improved once I have a better format for them), the cost is low and the expansion cost will likely be low.
The goal is for two people to get the game, grab figures on the shelf and have a game going in a minimum amount of time.

The initial version of each system is essentially a "core" game, playable in its own right and with unlimited upwards potential.
Think of it as a starter package, which will receive countless upgrades over time.
The price reflects that to some extent.

I am super excited about this venture and I hope you are too.

Will this overlap with existing games?
I don't think so.
Clash on the Fringe is aimed at fewer figures and a more involved mechanical system, No Stars in Sight is a hard, platoon level military game and the upcoming Starport Scum will be more of an RPG-styled approach, with more in common with something like Laserburn.

New Release Nordic Weasel Games rules Sci-Fi
This entry was posted on Thursday, June 9th, 2016 at 09:14 and is filed under News. You can follow any responses to this entry through the RSS 2.0 feed. You can leave a response, or trackback from your own site.

One thought on “Living Sci-fi Rules From NWG”