Today we’re launching a pair of new British Aeronef dirigibles. The first, and smaller vessel, is the LRS class (Long Range Scout) which, as the name suggests, is a patrol vessel with minimal armament but capable of long duration missions to scout out enemy fleets.

The large, twin-envelope craft is the Mantis class Dig Bomber. These vessels carry significant loads of gravity bombs for dropping on ground targets or, if the bomb-aimer is very good (or very lucky) even on enemy vessels below.

Both craft have non-rigid main envelopes using the distinctive tri-lobe design employed by British WW1 airships, with multiple independent ballonets inside each lobe to provide some measure of redundancy and damage-proofing. 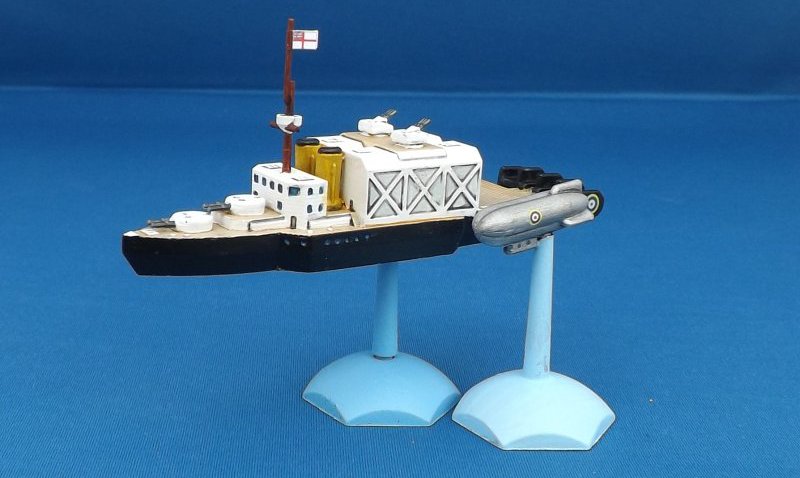 Both craft can operate with the Ark Royal class Dig Tender. A group typically consisting of an Ark Royal, several conventional escort vessels and 6-8 digs would be deployed as an independent long scout unit. The digs would be sent off on patrol missions of several weeks’ duration, returning to the tender for refueling, rearmament and replenishment of their gasbags. The tender can handle either two LRS class or one Mantis class on deck, with room in the large hangar for two LRS.

aeronef Brigade Models New Release Sci-Fi
This entry was posted on Friday, August 10th, 2018 at 12:46 and is filed under News. You can follow any responses to this entry through the RSS 2.0 feed. You can skip to the end and leave a response. Pinging is currently not allowed.

One thought on “New From Brigade Models”