The skies above the battlefields of the world of Hammer’s Slammers:The Crucible are not the safest place to be; computer guided powerguns knock down just about anything that flies, from aircraft, VTOLs, air cars, even missiles and artillery shells.

Nevertheless, there are a number of units that still field VTOLs in the combat zone for their speed and versatility. These craft fly nap-of-the-earth, down amongst the weeds operating effectively as fast ground vehicles. 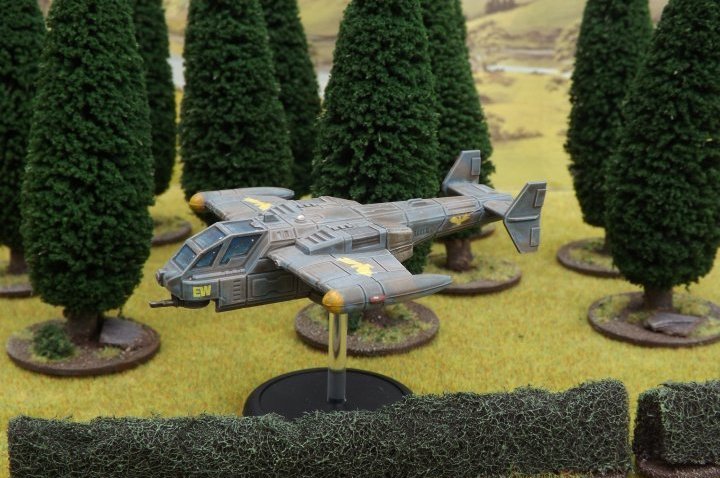 One such unit is the Eaglewing Squadron, which operates a mix of VTOLs, light hover vehicles and infantry on skimmers. They are currently re-equipping their VTOL wing, and the first new craft to enter service is the Demeter attack VTOL, slowly replacing the Eaglewing’s inventory of Ravens. It is a two-seater fitted with a tri-barrel chin turret and several wing hardpoints which can carry an assortment of stores.

The Demeter model comes in three resin parts (fuselage and two wings) and three metal parts (turret and two vertical tail fins). Available separately we have a pack of wing stores – two each of hyper-velocity missiles, gatling pods, rocket pods and anti-tank missiles. These have the pylon built in so you can fit the weapons wherever you like on the wing.

15mm Brigade Models New Release Sci-Fi
This entry was posted on Friday, May 3rd, 2019 at 12:56 and is filed under News. You can follow any responses to this entry through the RSS 2.0 feed. You can skip to the end and leave a response. Pinging is currently not allowed.

4 thoughts on “New From Brigade Models”