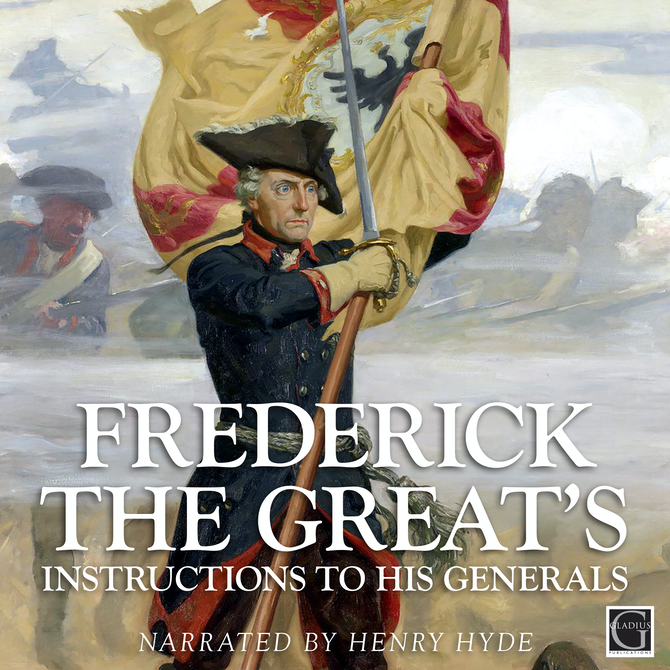 One of the great military treatises of all time, written by Frederick the Great of Prussia when he was, arguably, at the height of his powers, this audiobooklet reveals the tactics, strategy, tricks and ruses of war that this great general of the Enlightenment had distilled both from his own experience and his reading of the great generals of his age.

Both the military historian, the wargamer and, indeed, the general reader will gain valuable insights into the conduct of war during the horse and musket era, just as the generations of military leaders following the remarkable achievements of Prussia have done. Here, distilled into what seems such a slim volume, are some of the most extraordinarily candid revelations of the man who was as at home in the front line with his troops as he was in the palace of Sans Souci playing the flute.

Divided into a series of Articles, the range of topics covered is remarkable, and an absolute gold mine for those wishing to play campaigns, design boardgames or just immerse themselves in the spirit of the age:

I On the faults and merits of Prussian troops
II On supplies and rations for the troops (Feldkommissariat)
III On sutlers, beers and spirits
IV On dry and fresh fodder
V On knowledge of the country
VI On the ‘Coup d’oeil’
VII On the deployment of troops
VIII On camps
IX On how to protect a camp
X On how and why to send out detachments
XI On the strategies and ruses of war
XII On spies, how to use them on every occasion, and how to get information about the enemy
XIII On certain signs by which you can discover the enemy’s intentions
XIV On our countries, on neutral countries, on enemy countries; on differences in religions, and what conduct these different aims require.
XV On all types of march an enemy can make
XVI On what precautions you should take in a retreat against Hussars and Pandours
XVII On the way in which Prussian light troops will fight against Hussars and Pandours
XVIII On moves by which you can force an enemy to follow suit
XIX On crossing rivers
XX On how to prevent river crossings
XXI On surprise attacks on towns
XXII On combat and battle
XXIII On the reasons for and how you should give battle
XXIV On the unforeseen hazards and accidents which occur during a war
XXV On whether it is absolutely necessary for a commander-in-chief to hold a council of war
XXVI On army manoeuvres
XXVII On winter quarters
XXVIII On winter campaigns

henry hyde historical New Release
This entry was posted on Monday, May 10th, 2021 at 08:28 and is filed under News. You can follow any responses to this entry through the RSS 2.0 feed. You can skip to the end and leave a response. Pinging is currently not allowed.