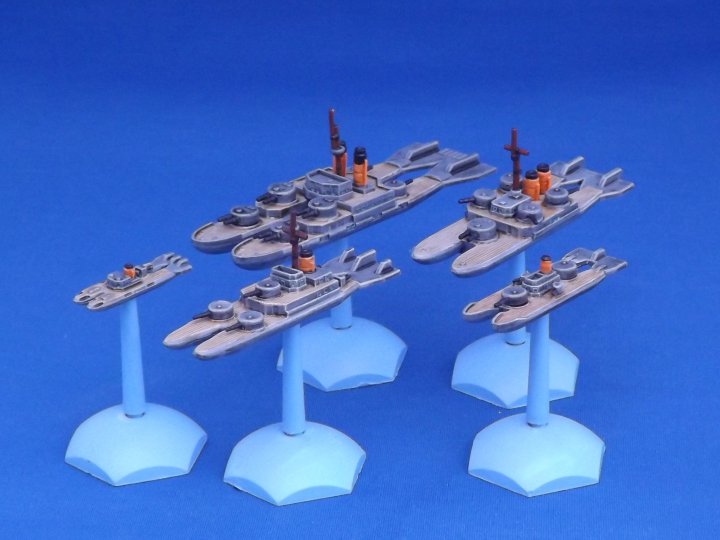 Although not one of the conventional major powers, the Netherlands nevertheless has significant colonial assets at the end of the 19th Century, both in Central/South America and the Far East. The Royal Netherlands Air Fleet watches over the skies and seas of these far-flung territories with its force of unique twin-hulled Catamaran craft

We’ve had a pair of Dutch models in our Aeronef range for some time. As well as remaking those, we’ve created three new designs to round out the classes. The de Ruyter class heavy cruisers remains the largest vessels in the fleet, but they’ve been joined by new light cruiser, frigate and torpedo boat designs.

The Dutch now get their own dedicated fleet pack with two of each of the largest four models, and a torpedo flotilla with five torpedo craft and a frigate as leader.

All of the models, apart from the torpedo Nef, feature separate turrets – the smaller ones are the existing secondary turrets from the Gaulois, while the larger ones are a new design. These are available separately in accessory packs of 12 along with all of our other turret models.

aeronef Brigade Models New Release Sci-Fi
This entry was posted on Saturday, February 11th, 2017 at 09:35 and is filed under News. You can follow any responses to this entry through the RSS 2.0 feed. You can skip to the end and leave a response. Pinging is currently not allowed.